November 15 2013
6
The first submachine guns appeared in 1915 year, and by the beginning of World War II, they were already widely spread in many armies of the world. Virtually all countries that took part in this armed conflict were armed with at least one sample of such small arms. weapons. The name submachine gun fully reveals the essence of this type of weapon. Submachine guns are designed for automatic fire (in bursts - like machine guns) using pistol ammunition. Currently, submachine guns continue to be a popular model of weapons, occupying an intermediate niche between the machine guns (assault rifles) and pistols.


Today, submachine guns are widely used to arm artillery crews, combat vehicle crews, various special forces, as well as police forces. This type of small arms has a relatively small mass and dimensions, and also has a high rate of fire, which makes submachine guns an indispensable type of weapon for melee at a distance from 50 to 150 meters.

In Russia, a huge number of models of submachine guns were developed, not all of them went into the series, many remained prototypes. One of these types of weapons is the Baksan submachine gun WG-063, which was designed by A. S. Neagodov, senior researcher at TsNIITOCHMASH. The main problem in the development of any submachine gun is to combine a relatively small rate of fire (ranging from 450 to 650 shots per minute) and a small dispersion when firing. For a successful solution of this problem in the submachine gun "Baskan" a comparative new technique was used, which received the designation "dynamic deceleration".

All submachine guns use pistol cartridges; for this reason, to simplify their design, a free slide was most often used (this was the case on PCA, PPP, MP-43, ultrasound, etc.) and the rear sear, that is, the bolt also played the role of a drummer. But with such a scheme significantly increased the weight, as well as the dimensions of the weapon. This is because the maximum shutter speed cannot exceed 7-8 m / s, and it is desirable to keep the firing rate at about 600 shots / min., Which is achieved only by increasing the mass of the shutter and its progress in the automation box. In order to get rid of the described disadvantages, apply a semi-free shutter or rigid locking of the barrel bore together with firing rate retarders. And this, in turn, greatly complicates not only the design of the weapon, but also its overall adaptability, which is critical for the mass production of weapons. 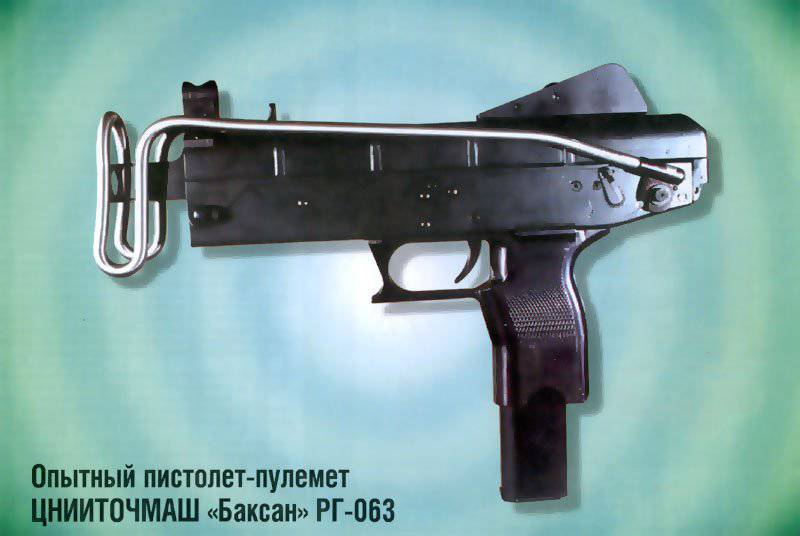 Therefore, the aim of the designers of TsNIITOCHMASH was to eliminate these drawbacks and develop an effective small-sized and technologically advanced submachine gun. As a result, the design of the PP was born, which had a progressively moving drummer, in which the principle of separate movement of the drummer and the bolt at the time of the rollback was implemented.

The essence of this technique is as follows. The inertial (or, to put it differently, free) bolt of the weapon covers the barrel like a pistol casing-bolt, while in the front part the bolt is designed as a muzzle brake. In the gate, there is a rather heavy (about 120 grams) drummer, which, together with the gate, forms a mass sufficient to effect inertial locking. Drummer and bolt have different springs, just before the shot, the drummer is located on the sear.

At the moment of the shot, before the occurrence of the muzzle moment, the striker and the bolt have time to jointly move approximately 1,5 millimeters, developing a maximum rollback speed at the level of 6 m / s. After the powder gases act on the muzzle brake, the rollback speed decreases, but the drummer continues to move forward, gradually overtaking the shutter. In its extreme position, the striker turns out to be earlier than the bolt, and after hitting the butt pad, he begins to move in the opposite direction, towards the bolt, which continues its rollback. In this case, their collision inevitably occurs, and the shutter speed decreases sharply, after which it comes to the extreme rear position already with the drummer at a low speed. At the very beginning of the reel, the bolt moves along with the drummer, but before the gate hits the displaced cartridge, the drummer is mounted on the sear, and the bolt is sent to the cartridge. The method described here allowed using a sufficiently powerful cartridge (9x23 SP-10) in the Baskan submachine gun to achieve a rate of fire at the level of 620 shots / min. with a small dispersion, especially in comparison with the classical models.

To increase the described effect, special flow chambers with side and central windows made for the passage of the barrel and gases were made in the front part of the bolt of the submachine gun immediately behind the muzzle of the barrel. 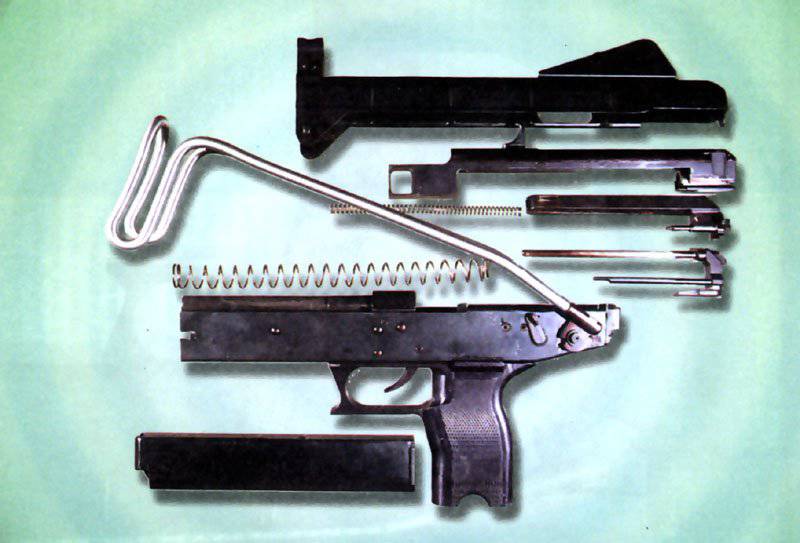 It should be noted that the PP “Baksan” RG-063 is made according to the “pistol” scheme. It consists of a receiver, a barrel, a bolt, a firing mechanism with a moving impactor and a guide spring of a combat spring, a reflector, a magazine and a folding butt-clamp. The reflector is made in the form of a rod having a protrusion to interact with the magazine body at one end, at the other end it is rigidly fixed in the latch of the lid. The guide spring of the spring is connected at one end to the latch of the cover by means of a hinge. The mass of the drummer ranges from 15 to 35% of the total mass of the drummer and the bolt.

To load the Baskan software, you need to insert the equipped magazine into the handle, then by the reloading handle move the bolt to the rearmost position, then release it. This will allow the bolt to send the cartridge from the loaded magazine to the chamber, and the drummer will stop at the lever and, after the shutter is turned off, the self-timer will go to the sear. Before opening the fire, you will need to install the kind of fire using the fuse and pull the trigger. To cease fire, you just need to release the trigger; in the event that a single fire was established, the drummer will stop at the sheptal.

When disassembling the Baksan submachine gun, you must first discharge it. To do this, from the handle of the PP is removed store In the event that the magazine is still in the handle, the protrusion of the latch latch rod simply rests against it and prevents the latch of the lid from moving forward. If the magazine is removed, this latch moves forward without problems, freeing the lid and allowing the shooter to detach it from the case.

Ctrl Enter
Noticed oshЫbku Highlight text and press. Ctrl + Enter
We are
Guns 12 caliber with the possibility of automatic fireThe weapon of victory. "Degtyaryov Infantry" - machine gun DP 85 years
6 comments
Information
Dear reader, to leave comments on the publication, you must to register.