French tanks in the steppes of Ukraine


The first to arrive were ferries with wheeled vehicles: cars and wheeled armored personnel carriers (VAB). What immediately caught my eye? This is the size of the BTR: they are very large in height. On all technology engines "Renault", on the VAB, in addition, automatic 4-x speed transmission with torque converter. And here it turned out that at low revolutions the armored personnel carrier is very badly moving, jerking like a cadet driver from a DOSAAF driving school. And all the armored personnel carriers, without exception, suffer from this disease. Further: the whole wheeled vehicle is without a tire pressure control system, which, naturally, does not improve the vehicle’s permeability or their durability in combat conditions.

May 10 arrived Tanks, Self-propelled guns, infantry fighting vehicles and other tracked vehicles: ARVs and engineering vehicles. Being on duty in the park, I could not get into the French field camp, but from May 12 all the French military equipment with various, even the most minor malfunctions, began to arrive in our park (also rented by the French) for repairs and maintenance.

I really liked the MTO based on the Reno-TPM-10000. This is a small crane, winch, equipment for the evacuation of wheeled and light tracked vehicles. Welding units, compressors, etc. transported on small uniaxial trailers by lighter trucks Renault-TRM-2000, analogue of our GAZ-66. almost all maintenance operations are mechanized. In addition, drivers, as well as tankers, practically do not take part in the repair of their vehicles. Eh, our army would have their maintenance ...

Then tanks, self-propelled guns, infantry fighting vehicles began to arrive in the park. And again, struck dimensions: do not miss. But the French say that “Leopard-2А5” is even higher, wider and longer, and on “Abrams” they said that it is like a bad house.

Purely aesthetically, by design, Leclerc makes a very pleasant impression. You could even say that he is beautiful. But dimensions: Our T-64BVs standing nearby in this regard have won a lot, and the weight in 55 tons is too much. The gun, even externally, looks weaker than ours, there is no ejector.

From personal contact with the French tank crews and mechanics, we also managed to learn many interesting things. For example, the tactic of using “Leclerc” resembles the tactic of using combat helicopters: jump out from behind the shelter, carry out a fire attack, and quickly hide quickly. In order for both the engine in 1500 horsepower, and the hydromechanical 5-speed transmission: But after a close acquaintance with the "Leclerc" it turned out that even though the engine is powerful, but in place the tank turns around with great attempts; the kinematics of the transmission is such that it is impossible to stop one of the caterpillars during a turn, although the caterpillars can be rotated in different directions on the spot (as in MTLB). Now about the tracks. The tracks are cast from aluminum alloy, respectively, the durability of the track tape leaves much to be desired. The weak point is the disc brakes of tanks: carbon lining burns, and very quickly. And in order to replace it, it is necessary to dismantle the engine along with the transmission, although it takes about an hour and a half to dismantle.

Rubber tires on support rollers (also aluminum) are very thin and often fail (see photo). Yes, and the suspension of the tanks (both “Leclerc” and AMX-30 / 32) is very soft: under the weight of a person who jumped up on the armor of a person, the tank weighing 55 tons sags. Because of this, in the corners, the drive wheel disengages from the tracks and starts to spoil them.

Now about the engine. Starting the engine is electric (and only), but the battery capacity is small (125VA), so you need to start the turbogenerator (like on Shilka or Tunguska), and only then start the diesel engine. When the diesel engine is running, the turbine does not stop, and is the main source of power for the tank. Accordingly, it is very noisy, and fuel consumption is also considerable. Fuel - only aviation kerosene. Fuel capacity - 350 liters and 2 barrels of 200 liters.

Armor, though thick, but without rational angles, is vertical. The "zalizannost" of the tower is achieved by removable, plastic boxes. The side screens are steel, 10-12 mm thick. Thickening of screens in the front part is another layer of screens, on top of the main one. But there is no dynamic protection. And the side armor in the MTO area is very thin.

Against this background, our T-64 looks very cool, and the French admit it.

The dimensions and weight of the power plant and transmission are impressive: almost 3 times the size of the engine and gearbox of the T-64 tank, weight - 6200kg. The engine is located longitudinally, to the left (along the way) from the engine - a turbogenerator, above the gearbox - two centrifugal fans and radiators. Exhaust gases from the turbine and from the engine are directed upwards, and the air from the fan is directed downwards. Even the French themselves admit that this creates a considerable unmasking sign in the form of a column of smoke over a tank and a cloud of dust behind the car.

Before installing the engine on the tank, it is connected to the tank with the help of repair cables and hoses, winding up, and checking the operation of all engine systems in different modes on the on-board computer. If something is wrong, eliminate on the spot, and only after that the engine and transmission are installed on the tank.

Tank crew jobs are very comfortable. The commander has a computer, one display of which is the commander, and the second is the gunner. Information on them is displayed the same and at the same time. The fence of the gun is made in the form of a fabric mesh. There is air conditioning and heater. The commander and the gunner occupy and leave their seats without problems, and the driver is only when the tower is rotated strictly straight, but it can also climb through the tower.

To evacuate such a heavy tank, a special tractor was created on the basis of the Leclerc: the same linear tank, but without a gun and automatic loader. Instead, the tower is located various equipment for repair. The winch on the tractor is missing. The embrasure of the gun is closed with plexiglass. This tractor can also be used to train the driver.

The driver has a steering wheel, inside which there are various buttons: lights, dimensions, turns, signal, etc .; two pedals: "gas" and "brake"; instrument panel, gearshift and reverse mode levers. The seat rises and falls with these levers using a hydraulic jack.

The general impression that was expressed by our tankers is as follows: the tank is comfortable, comfortable for the crew, but “weakly”, unreliable. 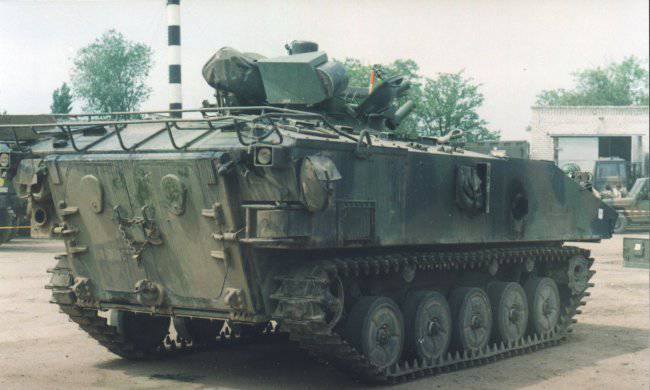 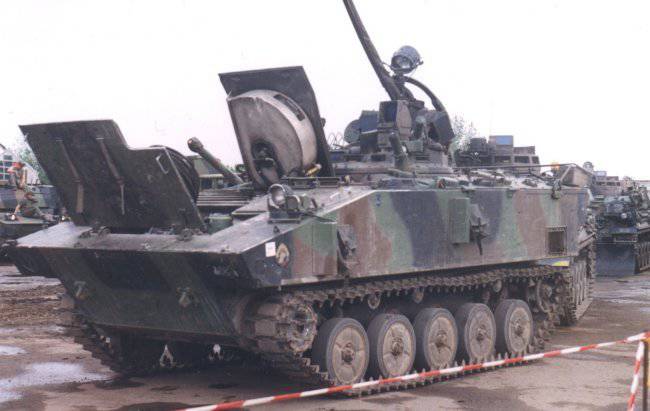 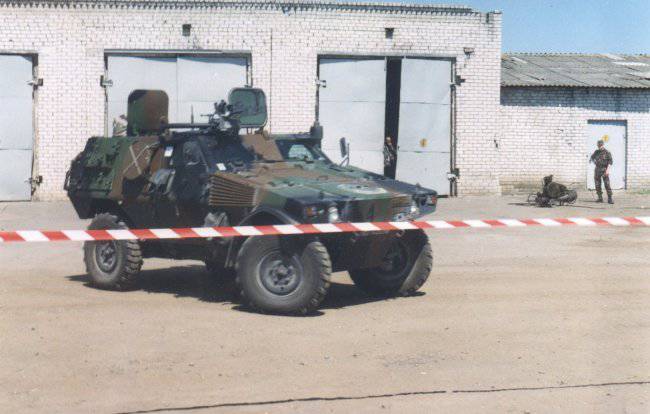 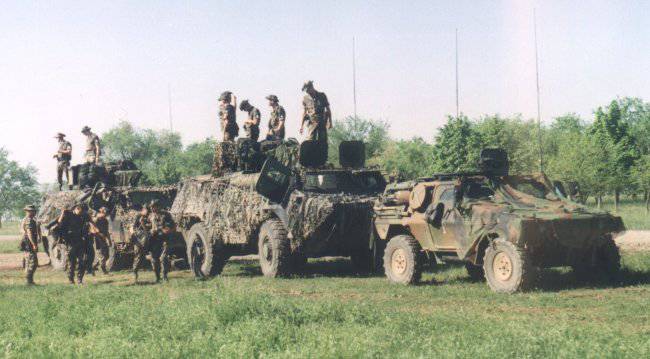 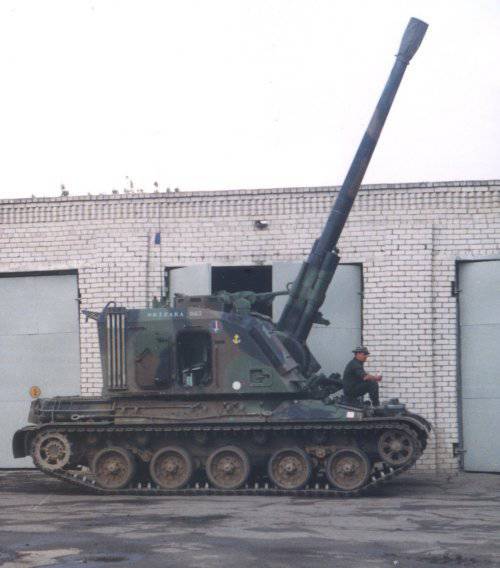 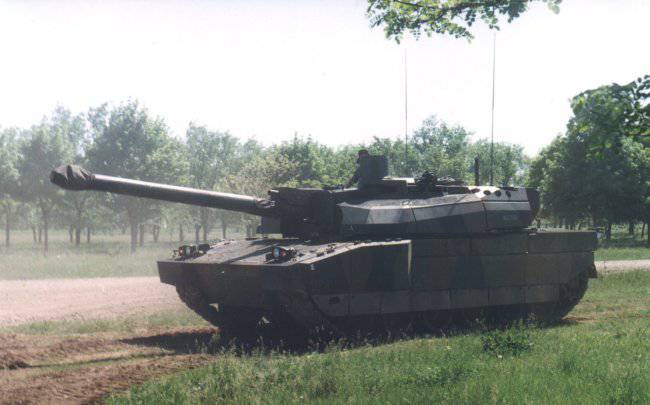 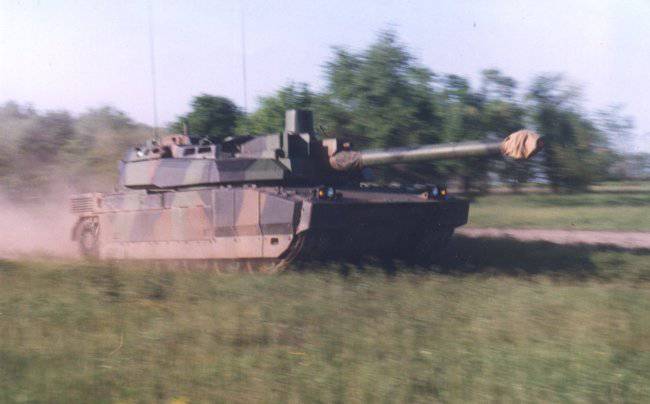 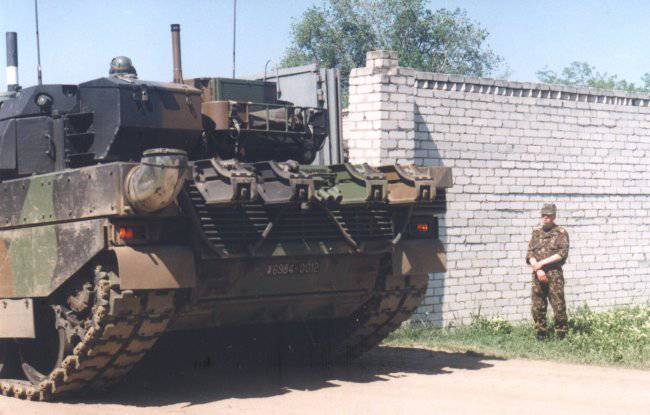 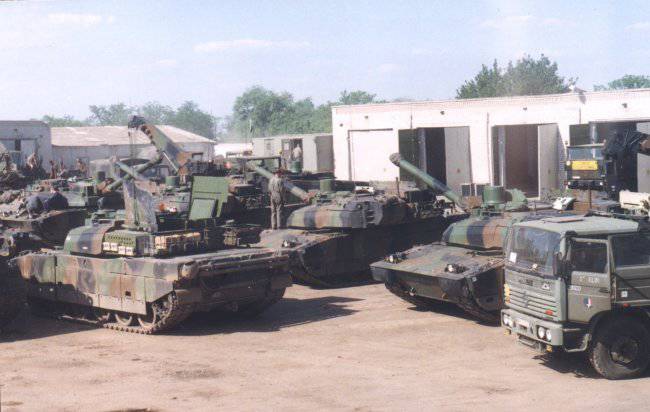 View of the repaired tanks. It is clearly visible as the tower closes the driver's hatch. In the foreground is a towing tank: there is a spare parts and repair station in the niche of the tower. devices, aft - rigid coupling. 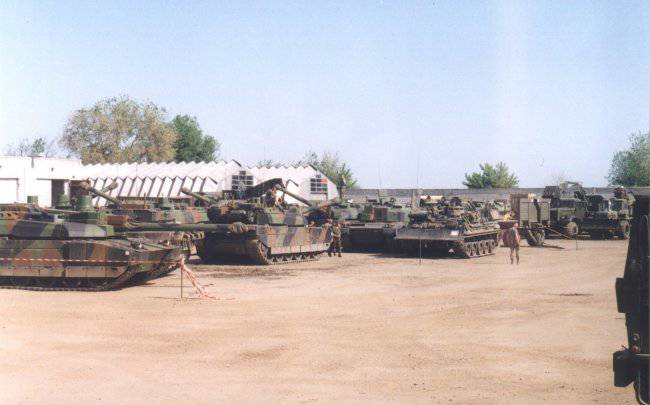 French tanks in our park. The unsystematic nature of their arrangement attracts attention. 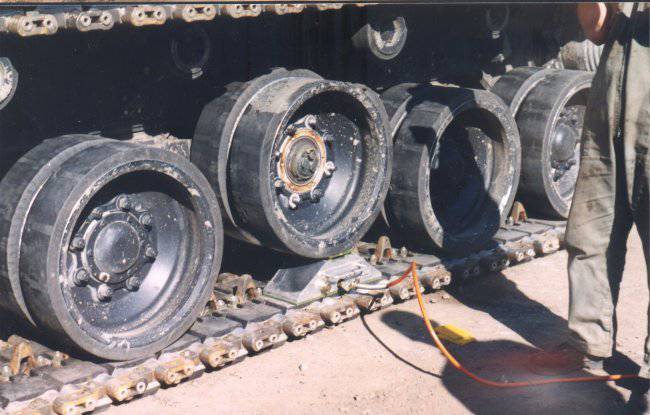 Hanging track roller with a damaged rubber tire with a hydraulic jack. 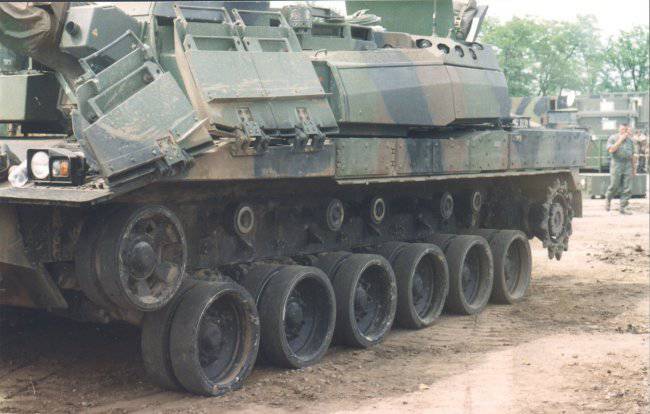 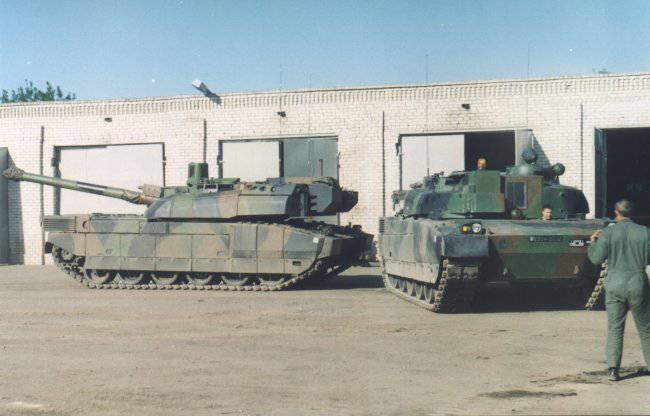 Evacuation of a faulty tank. 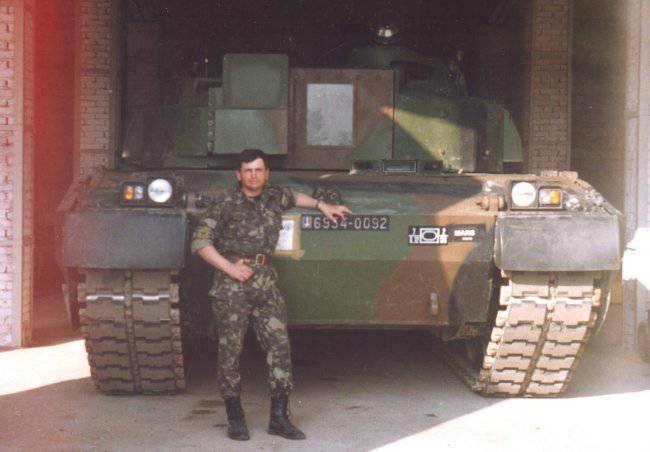 Tank wrecker. In the photo the author of the article, his height 176, see. 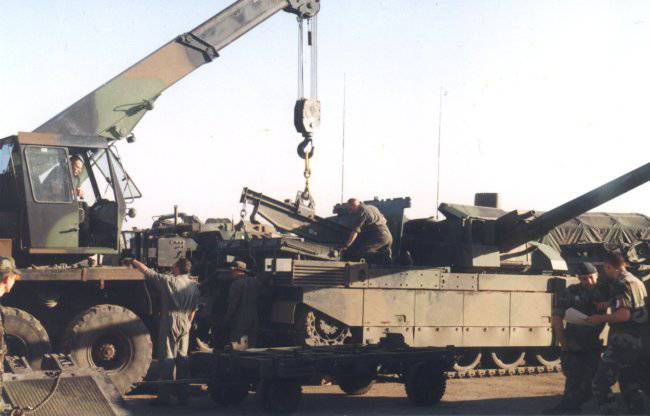 Removing the power unit from the tank "Leclerc". 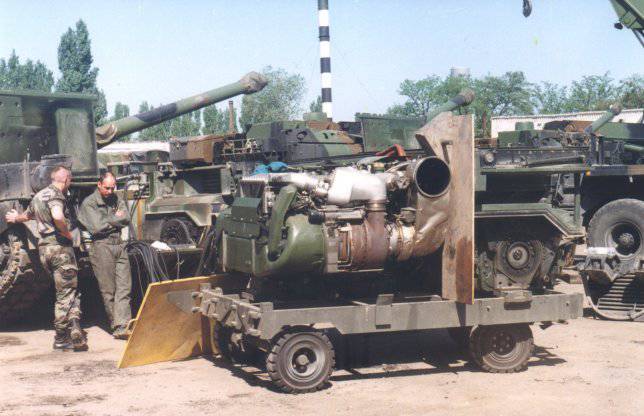 The power unit on a special trailer stand for maintenance, repair, and performance checks outside the car in all modes, connected to the tank with cables and hoses. 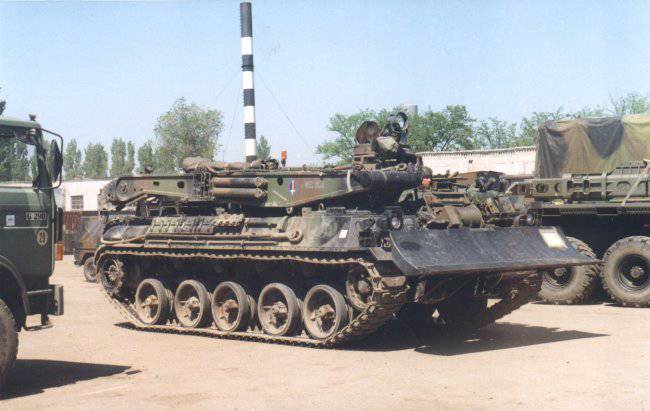 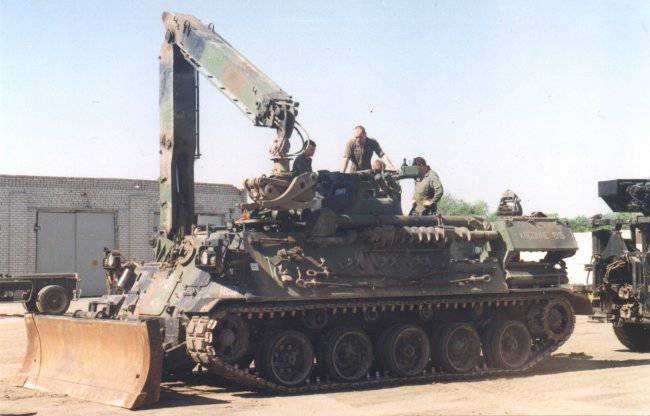 An EBG engineering vehicle based on the AMX-30 tank. 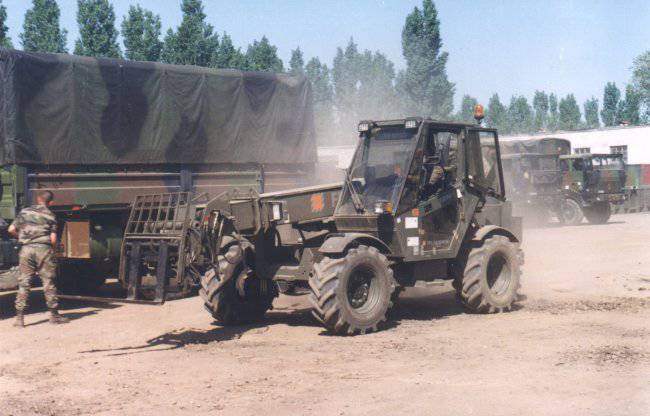 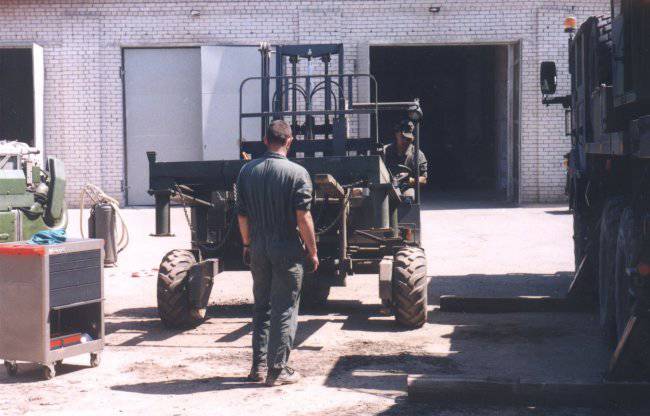 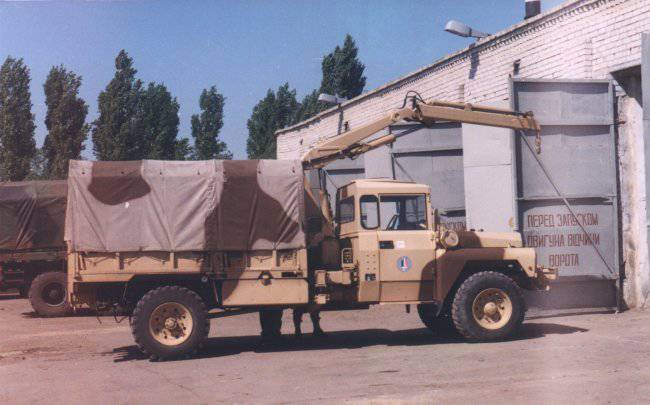 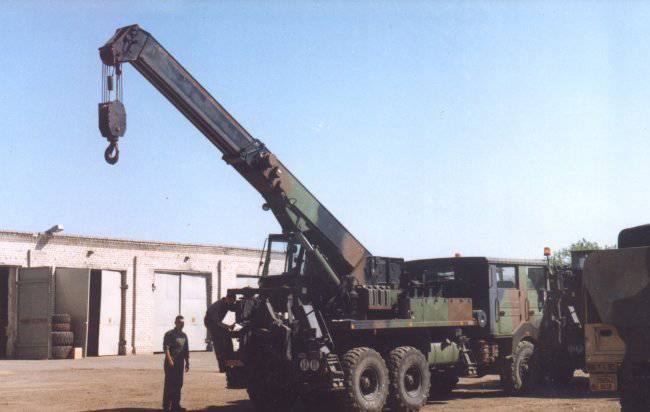 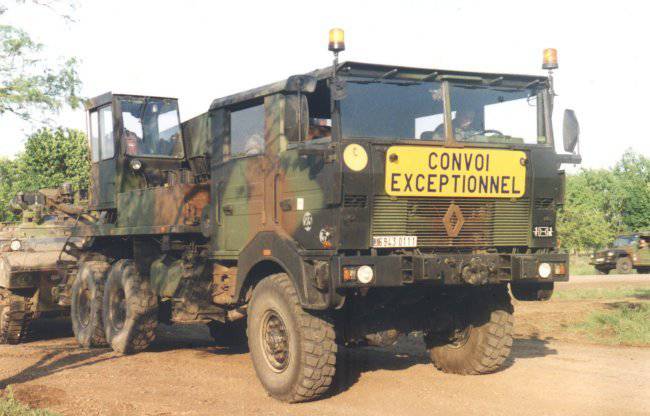 Off-road vehicle with a Renault TRM-2000 compressor installation providing repair of an EBG engineering vehicle based on the AMX-30 tank.