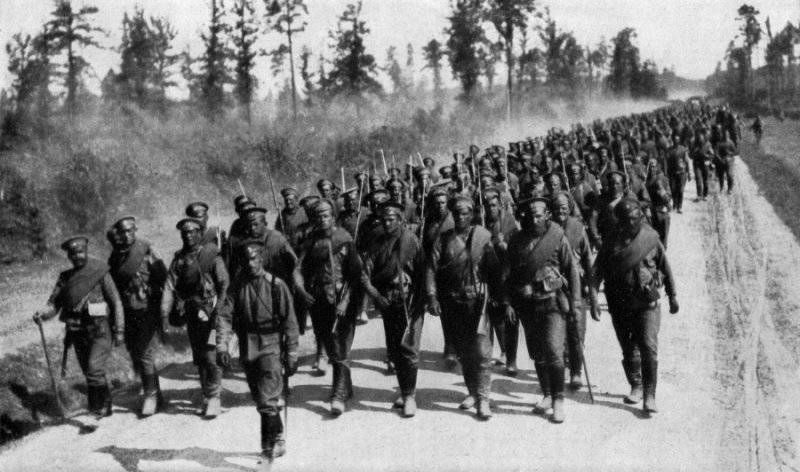 Not for the first time I have met with an attempt to glorify the World War I failed for Russia. And such attempts become frighteningly frequent. Let's agree immediately. I separate the "flies from cutlets." I separate the soldiers and officers who died heroically at the front in a senseless and hopeless war from the really rotten, stunned by the yellow infirmity of the political and military apparatus of the Empire.

He fought in the destroyed with heavy shells and wrapped in the blanket of gases Osovets, fought with an overwhelming enemy in the Gulf of Riga, broke through the Austrian front under the command of Brusilov, stood up to the end and did not surrender in the forests under Solda, retreated with the last half of the day to perform the same procedure for the wr unlocking wi im eternal memory and eternal glory. But to those who are guilty of all this, to those who have embroiled Russia in a completely unnecessary war for the interests of Naglo-Saxons, they have eternal shame and an aspen stake on the grave.

In this regard, I will allow myself to conduct a controversy with an article posted on the Military Review, entitled Myths and Legends of the First World War.

Myth number 1. Russia should not have got involved in this war.
What was Russia fighting for? In the same article, the author beautifully shows that Russia did not have any worthy goals in order to be drawn into this slaughter. There were no territorial claims, no geopolitical interests, no economic prerequisites. And for what they fought? For Serbia? For the "security zone in the Balkans"? Was this a “security zone”? Let us remember how, just two years before, Serbia had not looked at the interests of Russia and, with the participation of Turkey and other Balkan states, “dealt with” Bulgaria, which had just borne the brunt of the First Balkan. Yes, the Serbs wanted to spit on the interests of Russia. In the same way as it was in the days of Tito, and then, when Milosevic tried to sit on two chairs, leading the country to disaster. There is also an opinion that Russia "repelled" the attack of evil "Hans" who wanted to "scrub" it "from mozha to mozha". Excuse me, but why then, just nine years before, in Björk, the German emperor, “cousin Willy,” tried to force his stupid “little brother Nicky” into a union treaty and a division of spheres of influence? Or is it such a Teutonic trick? Russia and Germany had the same enemies. And they sat in London, Washington and Paris. That proved perfectly the finale of this war. After all, both Russia and Germany were losers, and the winners settled on the banks of the Potomac, Seine and Thames. There is also an "indisputable fact" that Germany declared war on Russia. Well, you can't really dispute the fact. Only for some reason, the Russian troops crossed the border, not the German ones, invading two directions into East Prussia. Actually, the Germans knightly threw us a glove, instead of cowardly (as Hitler did) sign some non-aggression agreement while they deal with the French. Although, of course, you need to understand that if Germany had not declared war, Russia would have had to declare it “to save France.”

So what did Russia fight for, what did she pay for with millions of lives and the existence of the empire? Yes, everything is simple - for loans issued by French bankers. For every franc of the tsar's debts, we paid a drop of Russian blood shed in defense of the lender. Before the tsar's nose, they hung up the old, rotten and sour carrot - the Black Sea straits. Carrot was notable, but old. For those who doubt the Tsarism’s desire to grab Constantinople, I can recall that the first Black Sea armadillos of the Sinop type had a piquant arrangement of GK artillery. They 4 guns looked straight ahead, weakening the side volley, but, allowing you to double the conventional scheme of the nasal fire. What would such a scheme be for? That's right, to break through the fortifications of the Bosphorus. And heavy artillery for the Port Arthur fortress was allocated from the fund of the Bosphorus expedition. However, the Russian Tsars laughed at the Bosphorus before. However, even this carrot soyuznichki wanted to strip Russia. Otherwise, why would they have to arrange the Dardanelles ordeals, about which the ANZAC fighters died in which are still being killed in sunny Australia?

Myth number 2. Russia's actions were due only to geopolitics.
But this is certainly a myth. No geopolitics, only "card debts". But why is it necessary to drag in some mythical "secret societies"? Are they freemasons? If I could have called then already. And then the Social Democrats, who were nowhere in power, were called, and then their eyes were shyly concealed. However, it is possible, I will not be about secret societies either. Their interests were completely intertwined at this time with the interests of the Naglo-Saxon and French bourgeoisie. The souls with all the fibers wished to strangle in a “friendly” embrace a dynamically developing and anticipating competitor - Germany. But what about the market, which should regulate everything? How is free competition? This is all for fools, for those who are weaker, who can be devoured by economic methods. And for those who have the audacity to be ahead of the Naxos, playing by their rules, the politics of encirclement and strangulation are in store, and at the end of the curtain there is a merciless war and predatory treaties. Should we, Soviet people, not know this?

Myth number 3. Russia should have taken the side not of the Entente, but of Germany.
In the event of war on Germany's side, Russia, being much weaker, could turn into a German satellite, as it did with Austria, which once reigned in the "caster" of German principalities. Such a place in Russia, of course, is not ranked. But it is still better than the bloody orgy of the Civil War and the red and white terror. But the coming to power of Stalin, who brought Russia to its proper rank, in this situation is very, very problematic. Therefore, in essence, we should be grateful to tsarism for its stupidity. But from this geopolitical nonsense does not cease to be geopolitical nonsense.

Myth number 4. Russia fought badly.
And what does the “class approach” mean here? If really fought - BAD. Let's start from the beginning. East Prussian operation. The double superiority of our troops, shells and ammunition and guns is enough, the Russian Guard (and also not all, of course) enters the battle against the landvernies (not all, of course) of the Germans! And the result? Not prepared? And who is to blame? Surely the Germans, who did not want to give us 40 days to mobilize? And, for example, the divisions of the Guards cavalry also had to be mobilized? Not? Then why did they do less than the only German cavalry division, after which they rested safely during and after Gumbinen, instead of pursuing the “defeated” Germans Pritvits?

Well, about the 1915 campaign of the year could simply be silent. The words "Great Retreat" says it all. If not for the shameful surrender of the Polish belt of fortresses. Almost without a shot. If all the fortresses fought back like the small fortresses of Osovets and Ivangorod did ... And so, the Germans got the heavy tools and shells so necessary for our army ... on a silver platter, or rather, in the cellars of the surrendered fortresses. I will not remind you how warriors were sent into battle with spikes on German machine guns, like hundreds of shells of heavy German guns, which had been torn down along with defenders, responded with a single shot of a field gun, which no longer had projectiles. Let's look at the famous Brusilovsky breakthrough. While the Austrians were beaten, everything was fine, it was worth facing the German “fire brigade”, then the offensive died. Yes, we could beat the Turks and the Austrians. But, as they say, why does the Italian army exist? To the Austrians, too, was someone to beat ... Is this really our level?

“And yet, it was on the Eastern Front that the final victory was secured!” It hurts me to say this, but this is a lie. Because the Germans only directed their main forces against us only in 1915. The rest of the time the main front was the western front. And at the same time, they also managed to slap on the necks of every Serb and Italian, with whom the Austrian allies were weak. Yes, Russia bore the brunt of that war. And without us, the Germans would have simply eaten the French. Still, the main burden of the four campaigns borne by the French and the British. The latter were even forced to make a general mobilization for the first time. And the French have not managed to recover from this bloodletting.

Myth number 5. Russia was defeated.
Yes, I did. Because, having lost, as in 1941, the cadre army, unlike the USSR, the Empire could not recreate it. Because she did not have enough industry. As there was no stock. After all, even the rifles and ammunition for them had to be bought abroad. Second largest weapons Russian infantry after our famous trilinea became an old Japanese "arisaka". And numerous Russian artillery fired less shells for the war than any of the great powers that participated in the war. In such a situation, it was impossible to recover what was lost during the retreats. Of course, the Germans did not capitulate on their own territory, but, knowing our allies and our complete dependence on them, it is perhaps better that the conditions of peace were dictated to us by the Germans, who were then a noble and strong opponent, and not imperial Saxons. They even managed to throw then, when the German Empire collapsed. But what could "snatch" from the allies of the Lord Kerensky, who thanks to them came to power? There is no time for the Straits, God forbid, that the integrity of Russia is preserved.

Summary.
Gentlemen and comrades. As you can see, the heroism of the Russian soldier could not save the shamefully merged imperial political and military elite war. When monuments are made to the fallen, I vote with both hands “for”. But when they begin to heroize and mythologize the most disgraceful moments and those who do not deserve it at all, the question inevitably arises. Who needs it? And for what? Yes, just everything. We want to take away our victory. They want to replace it with that old war, the victory in which the bad Bolsheviks allegedly stole from us. But it was not her! The West has been preparing its oblivion for a long time, Victory is like a knife in its heart. Well, we throw a bone. Like, you here, in due time, worked with us on errands ... heroic. But the worst thing is that it comes from our own government.

Ctrl Enter
Noticed oshЫbku Highlight text and press. Ctrl + Enter
We are
The eternal loser. The Life and Amazing Adventures of John McCainOn the other side of the “red” and “white”. Izborsk Club Report
28 comments
Information
Dear reader, to leave comments on the publication, you must to register.