Fighting girlfriend. For the sake of her husband, Ludsiya spent a year under bullets in Chechnya 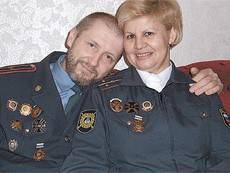 Relationships in the Romanov family were tested with gunpowder. Here I would say that from the first meeting between them ran a spark, but this would not be true. “There was no mad passion. It all started with friendship. I Sergey vybaltyvala all their female secrets. If I knew that we would later become husband and wife, I would be more careful, ”Ludsia laughs.

Both of them worked in the police department of the city of Svetly in the Kaliningrad region. They were lured there from school for a rare talent to find a common language with the most lost hooligan. Than took difficult guys, she herself really can not explain. But the detection of juvenile crimes she was exemplary. The next step was the position of the operative of the Criminal Investigation Department, and with it the adult cases - the murders that went missing. Worked all day. She worried that she practically did not see her little son. Vitalka was a woman who grew one: “In short, her husband fell in love with another.”

Sometimes the women wanted to say something, cry into a vest. Such a vest for her was colleague Sergey Romanov. He even borrowed money before the payday, and ran for mineral water in the summer when Lucy’s head was splitting from the heat of the heat. “We were friends for several years. There was no talk of any feelings, Sergey had a family. Yes, and we only saw each other at work, ”says Ludsia. And suddenly one day, late in the evening, Sergey appeared on her doorstep. It was clear that something had happened. Inside Sergei everything was bubbling, but he did not go into the explanation: “I have nowhere to go. I can't go home. Can you stay overnight? ” Sergey, like a true man, didn’t endure dirty linen in public. But his pain was clear to her, she herself experienced a similar situation with her ex-husband.

She put him a cot. They sat down to drink tea. And both felt that it should always be. Colleagues at the wedding laughed: “We have long seen that you were destined to be together. And it took you several years to understand this. ” Vitaly Sergey replaced father. “Recently my husband had an anniversary, colleagues, friends gathered. So our Acne, who was then 23 of the year, gets up and says: “Dad, you are the best. I am proud of you. Let everyone have such bati ”. It was necessary to see what was going on with Sergei, he, always so discreet, almost burst into tears. ”
Battle girlfriend

“And Vitaly never reproached you that you went to Chechnya for Sergei?” I ask. “Vitalke then turned 17 years old, he is our own guy. To our parish, it happened, the soup will cook, pancakes will bake, the apartment will be vacuumed. I did not drink or smoke. Golden boy. I was not afraid to leave him alone. My son understood and accepted my decision, ”says Ludsia.

The war entered the life of the Romanovs in 2001. Their divisions received a distribution list for service in Chechnya. Sergey first volunteered, signed a contract for 3 of the month. Those months seemed like hell to her. After all, over 10 years of living together, they did not leave more than a day. Once, before this trip, Sergey had to stalk poachers for a week. So Lucy came to her husband on the second night with food and a thermos. And then every night helped keep the watch. The poachers of those Sergey detained, one of them turned out to be a recidivist, on whose conscience theft and murder. Over time, colleagues have ceased to be surprised that the Romanovs are on family duty at night. Friendly. Lucy for her husband and fishing, and hunting. Sample combat girlfriend.


When Sergey returned from Chechnya alive and unharmed, Lucy thought she would suffocate with happiness. And he waited and was stunned: "I signed a contract for another year." And then she rushed about the apartment: “I will not let one go! I will go with you! “What the hell are you? Who goes to war with his wife? We have men and not a single woman in the 400 regional department! ” “I will not let one go!”, Lucy either threatened with a divorce, then fell to her knees. It was a pity to look at Sergey. Finally, he said: “If you start whining in Chechnya, blame yourself!” “I will not, dear! I won't! ” On the same day, Ludsiya wrote a report on a business trip to Chechnya. In October 2002, the couple was already in Shali, in the local police department. Sergey and Lyudsiya settled in an iron trailer where they placed a bed 60 cm wide, a table and a “stove”. From the first days of the contract were on starvation rations. “We didn’t get food, and we didn’t pay our salaries, so we couldn’t buy anything on the local market. We lived on bread and water. The guys lost weight in front of their eyes, and they had to go on missions, carry military equipment on themselves. We met the new 2003 year, and on the table were two eggs and two pieces of bread. I could not stand it and rolled the complaint to the center. Came checking - a woman. She called our boss to her and let us shout: “If you don’t stop stealing, I’ll give everyone a shower!” The next day, they gave me a salary and brought food. The guys were all amazed: "Well, Lyusya, you give!"
Stay alive

Lucy did paperwork in the department and interrogated the detained female snipers (there were quite a few of those at the time). Sergey often went to special missions in alarm. Sometimes the operation in the mountains lasted a week. On such days, Lucy could hardly close her eyes at night ... and adapted herself to disassemble the dried fruits - laid out separately cherries, raisins, apples, dried apricots. Then again, all shook in one bag. Or knitted socks - almost everyone in the part presented such a gift. And she tried not to think that not everyone would return from her assignment. And that Seryozhu she can no longer see alive.

By an amazing coincidence in Shali among the contract soldiers, as in the film “White Sun of the Desert”, were Sukhov, Vereshchagin and Abdullah. Abdullah often talked about the bride who was waiting for him at home in Dagestan. The bullet hit Abdulla one of the first. Sergey gets a photo where comrades sit at the same table in Chechnya. Less than half survived. “And this one,” Sergey points to a young lad, “has lost his mind. We covered it for some time, did not take it on assignments. Then I had to be sent to the hospital. ” Death lurked not only outside the perimeter of the department - the police unit itself was fired every day. One evening, Lucy was sitting on the bed, knitting, then, as if by some force, had caught her and forced her to change the chair to another corner. After a second, the gunfire line flashed over the bed of the trailer. If she hadn't retired, Vitalik would have remained without a mother, and Sergey without a wife.

Lucy kept her word and never limped on the war. “Although the last months have been at the limit. And when we arrived from Mozdok by train to Moscow, made a transfer to the train to Kaliningrad, I burst into tears. I stand in military uniform, smear my face with tears, I can not stop. Conductor rushed me otpaivat tea, candy treat. Well, I can not stop.

The first month of Lucy at night was deafened by silence, somehow she even asked her husband: “Petard, or something, let it go”. She became afraid of city streets when she went to the store or to the market, took her son with her. At the sight of a pack of stone thrown on the road, the militants hid bombs in such.

And yet she again became the very smiling Ludsii. He is glad that his son got married, started his own business, and gave him a moped for his first earnings. Seeing gifts from “AiF” - a red T-shirt and a red bandana with a company logo - smiles: “Oh, I'll put it on in the spring, I will sit on a motive and roll around our village.” Sergey is laconic in nature, listens with pleasure as his wife talks about hunting and fishing. “Seryoga otchebuchil, dragged from the forest a bald little ball - a small hedgehog, he was still without needles. So he lived with us for three years, sat down with us at the table, ate. And once in the summer Seryoga comes, and I go to my house in the heat of my boots. “Has she lost her mind?” - “No, I’m hungry at my heels, he bites at my heels, I didn’t have time to cook him for the food. Lucy laughs loudly. They got a set for tea - the one that Luce's guys on 8 gave Martha in Chechnya. And where just got hold of the war?

Recently Lucy and Sergey have retired due to their years of service. He is a retired major, she is a senior lieutenant. They say that now the most unusual for them is holidays. “We used to always work on holidays. And now we don’t even know what to do on these holidays! Difficult task.

Happy holiday, dear women! So that you always were beautiful and loved! 8 March, we will raise the glasses for fighting girlfriends!