November 14 2013
25
During 2014, the fleet of combat vehicles of the Airborne Forces of Russia will replenish 200 with the upgraded airborne assault landing vehicles - BMD-2. It is planned that the machines will receive a more advanced weapon stabilizer 2E36 of the new generation, as well as the radio station P-168. It is worth noting that in the Airborne Forces the process of updating the armaments and military equipment models in service is ongoing. For example, by the end of this year more than 30 modernized BMD-2 will be transferred to the military units of the Russian airborne troops.


In 2013, the supply of modernized BMD-2 vehicles is carried out within the framework of the current government contract for the overhaul of combat vehicles, which was concluded in the spring of this year. For this competition, the price of which amounted to 170 million rubles, it was necessary to overhaul the 34 BMD-2. In parallel with the modernization and repair of BMD-2, the Ministry of Defense of the Russian Federation is engaged in the repair and modernization of BMD-1.

The BMD-2 combat vehicles have long since established themselves from the very positive side, Russian paratroopers consider the BMD-2 a very tenacious machine that is unpretentious in operation and very reliable. In addition, the machine has a fairly good fire capabilities. Its armament consists of 30-2 42-mm automatic guns and 2-x machine guns of 7,62-mm caliber, as well as a complex of antitank guided weapons. Currently, the airborne unit combat equipment comes under contracts concluded under the State Defense Order for 2011-2020 years. As of 2012, the year in the Russian Airborne Forces was about 600 BMD-2. 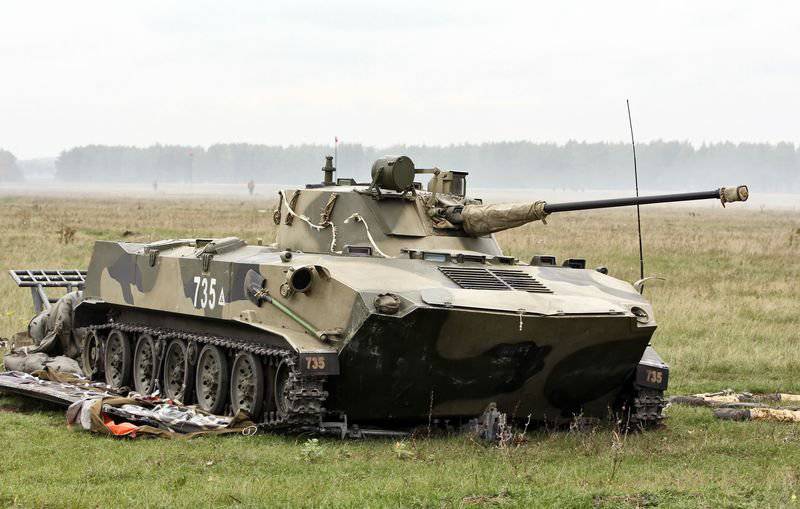 BMD-2 is in service with the national army, starting with the 1985 year. Main weapon The machine is its automatic 30 millimeter rifled 2A42 gun and the PKT submachine gun 7,62-mm machine gun paired with it. The landed vehicle has a mass of 8,2 tons and is able to reach speeds of up to 60 km / h. The power reserve of the BMD-2 is about 450 km. The crew of the assault vehicle consists of 2 people, the number of assault forces is 5 people.

After measures taken to modernize the BMP-1 and the development of a new infantry fighting vehicle, which received the designation BMP-2, the USSR decided to strengthen the BMD-1 weapons. The KB of the Volgograd Tractor Plant was entrusted with solving this problem, the work was headed by A. Shabalin. The development of a new airborne assault vehicle began at the beginning of the 1980-ies, and already in 1985, the new vehicle was put into service with the airborne units. The serial production of the new assault vehicle was carried out at the facilities of the Volgograd Tractor Plant.

The main difference between the BMD-2 “Booth” and its predecessor was the new weapons complex, which in its composition was completely identical to the weapons complex that was installed on the BMP-2. Like the BMD-1, a new airborne assault vehicle could be transported by air, it was easily placed in the cargo cabins of military transport helicopters and airplanes. A special parachute platform, P-2 or P-7, equipped with a multi-domed parachute system, was used to land the BMD-16 from the air. Also for landing from the air can be used recently created parachute-reactive systems - PRSM-925. With the help of such a system, the BMD-2 can be parachuted from an Il-76 military transport aircraft, located at an altitude of 500-1500 meters. 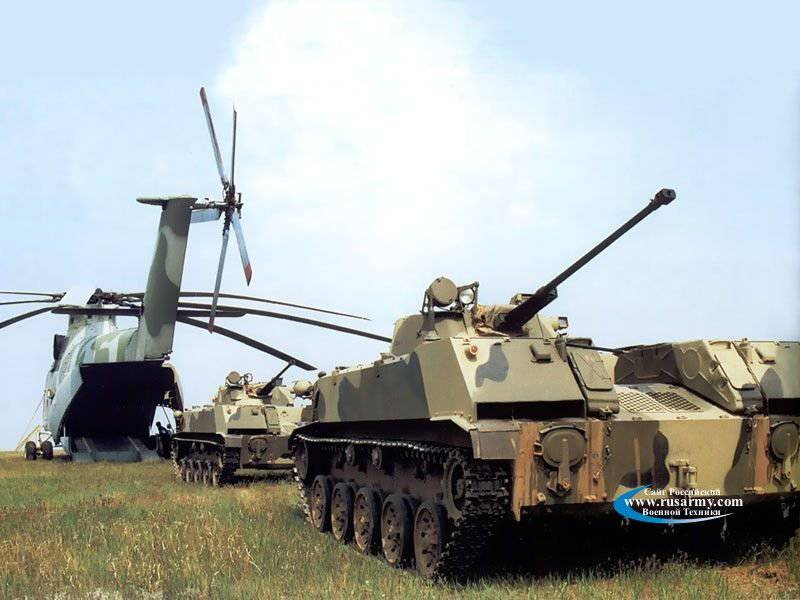 The crew of the vehicle (with a landing force), as in the previous version, consists of 7 people: driver, commander, gunner-operator and 4 arrow. The BMD-2 has a classic layout for this class of machines, its scheme is similar to the BMD-1: in the front of the case is the control compartment with the driver’s seats (center), the commander (left) and the machine gunner (right), in the middle the combat vehicle installed a tower with weapons and a gunner-operator, the other members of the landing force are located behind the tower. The rear part of the BMD-2 hull is occupied by logistic equipment, in which a power block is fastened along the axis of the combat vehicle on 3's supports, which was entirely borrowed from the BMD-1. Due to the placement of the cooling system in the side compartments and the relatively small height of the engine, dismounting of paratroopers through the hatch located in the stern is possible.

BMD-2 has a welded body, which is made of a special armored aluminum alloy. The armor of the vehicle protects the crew and landing force against large-caliber 12,7-mm armor-piercing ammunition in frontal projection and provides all-round protection of the vehicle against ammunition of the caliber 7,62-mm. In front of the hatch, installed above the driver's seat, is the 3 of the TNPO-170А surveillance device.

For firing from 30-mm automatic cannon can be used ammunition with fragmentation tracer (OT), fragmentation futono-incendiary (OFZ) and armor-piercing tracer (BT) projectiles. BT-projectiles are designed to combat the lightly armored targets of the enemy (such as armored personnel carriers or infantry fighting vehicles), as well as its firing points at a distance of 2 kilometers. The cartridges with OT and OFZ-projectiles are designed to combat the enemy’s infantry and various unarmored ground targets at a distance of up to 4-km. Also, these projectiles can be used to combat low-flying air targets moving at subsonic speeds at altitudes up to 2 thousand meters and slant distances up to 2,5 thousand meters. The 2А42 gun is powered by 2 tapes. Tapes include individual links that are stacked in the power supply system stores. In the front compartment of such a shop there is a ribbon for 100 cartridges with BT shells, and in the rear compartment there is a ribbon for 200 cartridges with OFZ or OT shells. In addition, the BMD-2 has two PCT 7,62-mm machine guns, one of which is paired with the gun, and the second is mounted from the right side of the machine. 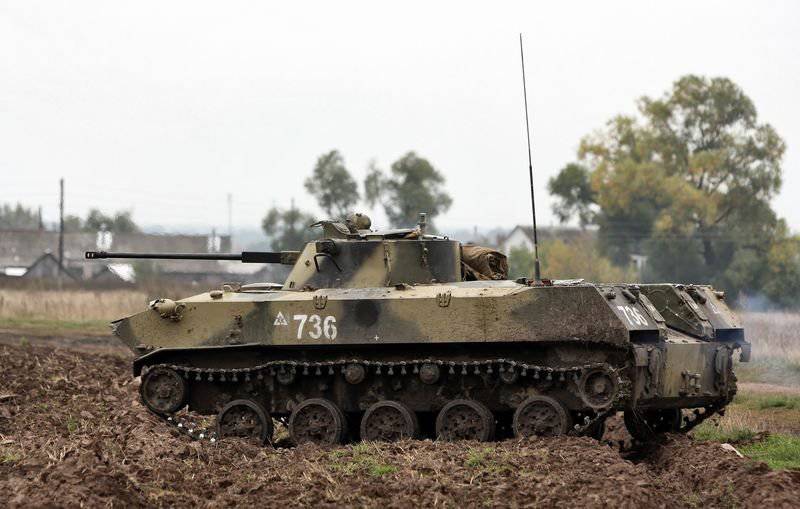 In addition, the BMD-2 is equipped with a 9K111 guided missile system, the main purpose of which is to combat tanks, as well as other mobile well-armored enemy targets that move at speeds up to 60 km / h. ATGMs can also be used to combat enemy pillboxes and bunkers, as well as helicopters hovering above the battlefield, provided they are in the optical visibility zone at a distance of up to 4 km. This complex consists of PU 9P135M and ATGM type 9M113 "Competition" and 9M1 IM (9M111-2) "Bassoon". The BMD-2 ammunition includes 3 guided anti-tank missiles (2 Bassoons and 1 Competition). All 3 ATGMs are located on the port side of the vehicle.

To guide anti-tank guided missiles over a wireline, ground control equipment is used, which includes the 9Sh119М1 pointing device and the 9-474 hardware unit. In the stowed position, the PU without a tripod is mounted on a special bracket located near the seat of the BMD commander. The tripod is mounted on the roof of the middle compartment of the car on the right side of the tower. In a combat position, the launcher without a tripod and with the limiter of the angles of vertical guidance is mounted on a special bracket located on the right side of the hatch of the gunner-operator. The working angles of guidance of the 9P135М PU in the horizontal plane are from 15 degrees to the left to 37 degrees to the right, in the vertical plane from -5 to + 10 degrees. In the case of the tower itself turning, the horizontal guidance angle of the PU is full 360 degrees. If necessary, the launcher can be installed separately from the airborne assault vehicle in a specially prepared firing position.

Ctrl Enter
Noticed oshЫbku Highlight text and press. Ctrl + Enter
We are
BMD-3 based combat vehicles (1 Part) BMD-4"Reincarnation" BMD-1
25 comments
Information
Dear reader, to leave comments on the publication, you must to register.