Eastern Europe on the margins of the European Union 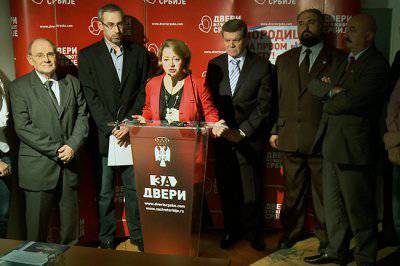 The scandalous situation around the elections in the northern regions of Kosovo, clearly indicated the lack of viability of the Brussels agreements of Belgrade and Pristina as a regulator of the Kosovo problem. The re-run at the three polling stations in Kosovska Mitrovica, scheduled for November 17, will not change anything in this situation. Kosovo Serbs do not know whom to listen to them, the authorities and the opposition in Serbia met in a propaganda clinch
, and the Kosovo-Albanian regime is mired in its own political squabbles. All this means the failure of the Kosovo policy of the European Union and the fallacy of the calculations that peace, stability and cooperation in Kosovo can triumph at the behest of Brussels. Commenting on statements from the EU headquarters, the Kosovo Albanian-language newspaper Koha Ditore has aggravated that they “do not inspire much hope that Brussels will undertake any obligations”


The inability of the EU to ensure the normal conduct of elections, declared in advance as fateful for the whole Kosovo settlement process, is not only a fault, but also a misfortune of the European Union, not least explained by the vagueness of the EU’s common policy in the Eastern European direction. It was not by chance that at the same time when Brussels officials agreed on the parameters of the re-voting in Kosovo, the European Commission decided to postpone the adoption of Bulgaria and Romania to the Schengen zone for an indefinite period. At first, European Commission President Jose Manuel Barroso, in an interview with French television TF1, stated that “next year neither Bulgaria nor Romania will enter Schengen”, since in the issue of joining these countries to the Schengen agreement “there is too much resistance in the EU”. Barroso recalled that in October this year Germany, France and the Netherlands opposed this move.

And then the European Commission spokesman Frederick Vincent, instead of trying to mitigate the situation, even more added fuel to the fire, telling journalists the following: “The opinion of the European Commission remains the same: Bulgaria and Romania are ready to join Schengen. But at the moment there is such a situation in the EU, as a result of which the Schengen area cannot be expanded in the 2014 year. The EU is not ready for this. ” That is, Bucharest and Sofia have carried out the necessary preparatory work for entry into the Schengen zone, but the “troika” represented by Germany, the Netherlands and France (and also, according to some sources, Austria and Finland) appropriated the right to speak on behalf of the whole EU and disavow the previous recommendations The European Commission, which opened the Schengen doors for the Bulgarians and Romanians, subject to the fulfillment of specific technical requirements.

The situation is as scandalous as it is indicative. It is indicative, as it demonstrates the dubious ability of the European Union to change the rules of the game and revise earlier decisions in favor of the political situation. With one hand inviting the delegations of the former Soviet republics to the Eastern Partnership Summit in Vilnius 28-29 in November, Brussels with the other hand shows that neither the voice of Eastern European countries, nor their economic or legal reform activities are decisive for the EU. The “troika” decides everything, based on its own internal political considerations, calculations and phobias.

Moreover, if Bulgaria and Romania as members of the EU, at least, can count on financial and economic assistance from the same European Commission or working with it in the single IMF crisis liaison, then the Eastern Partnership countries represented by Azerbaijan, Armenia, Belarus, Georgia , Moldova and Ukraine can not count on it. The proposed signing of the Association Agreement with the European Union does not give Ukraine and Belarus any guarantees in terms of their subsequent admission to this organization, but inevitably leads to a breakdown of the entire complex of regional economic ties that has been forming for decades and even centuries ...

According to the calculations of one of the leading Russian economists, Advisor to the President of Russia Sergey Glazyev, non-participation of Ukraine in the single Eurasian economic space as a result of the one-sided course of integration into the EU will cost a huge amount - 250-300 billion dollars. “What is the political meaning of this whole campaign?” I will not reveal the secret that the main political meaning of drawing Ukraine into association with the EU is banal isolation from Russia, ”Sergei Glazyev is convinced. Deputy Prime Minister in the Russian government, Dmitry Rogozin, recalled that the signing of the Association Agreement with the EU means a very long process, under which Kiev will fulfill a lot of burdensome conditions, including for its economy, without having the prospect of full EU membership: how not to go to the bathhouse, but how to sit in the waiting room. And all my life to sit in the waiting room. "

As for Belarus, taking into account the current level of interaction between Brussels and Minsk, there it could even be a matter of a waiting room, but of the “backyard” of the European Union. But the Balkan countries, including the long-suffering Serbia, are in the queue for the European Union. What conclusions will they draw for themselves from the current collisions around Bulgaria, Romania and the Eastern Partnership?

Ctrl Enter
Noticed oshЫbku Highlight text and press. Ctrl + Enter
We are
Kosovo Albanian mafia is heading for the seizure of southern Serbia“Independent Kosovo”: global pathological crime
67 comments
Information
Dear reader, to leave comments on the publication, you must to register.