The era of the witnesses of perestroika 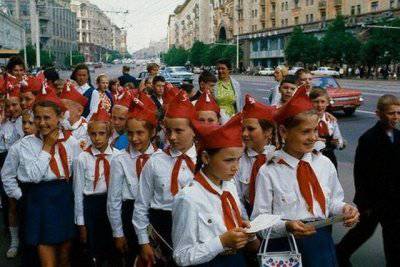 My generation has a unique life skill: for some time we were honestly raised by Soviet people.


The culture of upbringing of the Soviet person was rich from early childhood. The best minds of our time worked on agitprop - the most talented authors, composers, artists, poets, selected from 3 generations of active Soviet people. From the thundering Gorky and Mayakovsky to the pastel humanists Krapivin and Aleksin, from the touching fairy tales of the field commander Gaidar to "Why Pochemuchka" and "Professor Fortran" - all this is great Soviet children's literature. And each subsequent generation of propagandists and educators polished and honed the experience of the previous one, each of them increased its tools.

They purposefully cut the man of the future. And we are the last prototype they have developed. There was no other such generation. It all ended on us.

The bright future was canceled. We gave out consolation vouchers, which did not go for the future.

Bottom line: today for every post-Soviet young man in his thirties there is a Soviet patriotic song that will make his nose sting. Or a movie. Or a verse.

Is it good or bad? In my opinion, in this - historical chance.

Russia, whatever you call it, objectively needs to be nuclear, terrible, big and insidious. Because, as it turned out (and many noticed it over time), in the free world it is rather dumb to be nyasha: they will not eat, they will take a bite.

In addition, Russia objectively needs to remain a social state - well, at least outwardly strive for this. You cannot survive without social infrastructure in our latitudes: you will freeze the population.

But the "Red Monster" of our childhood had its merits. Like streets where it’s not scary to let children go, and even without mobile phones. In general, our monster was quite fluffy. And caring. And prudent. For example, he did not arrange deportation camps and torchlight processions, but calmly employed and treated Tajiks and Uzbeks at their place of residence. Not the most tricky process, but for some reason the "free nations" cannot set up a similar one. Including, however, the Russian ...

And it is thanks to the Soviet attitudes that the “kindness and intelligence” of the state is assumed in our country as a default guideline. Meanwhile, as we now know in our own skin, there are other state formats in which concern for the population is optional. And many signs indicate that our "post-welfare state" is gradually drifting in that direction. It is not surprising that the former Soviet people are resisting: the state for Russia is a life support system, the society is not ready to give up the last spacesuit and acclimatize in outer space.

And with this whole series of age insights, trends and items for nostalgia, we are entering an era of change.

It is on her that the dawn of activity of the “last Soviet” generation falls.

(No matter how honor the current authorities are, they are in any case not eternal. What kind of change they are raising themselves is a separate question; the Burmatovs obviously will not rule, because the "Brezhnev baby boom" is a demographically significant phenomenon, and it is so simple for all the passionaries of this you can't push the waves).

Demographically, it turns out that over the next 10 years in Russia, one way or another, the last Soviet generation will integrate into high-level social structures (will receive noticeable leading positions in industry, civil service, business).

But this is the generation of the last pioneers who found the most common type of Soviet camps and palaces - pioneer.

Generation of courtyard Elusive Avengers, Electronics, Musketeers, Guests from the Future, Shaolin monks - depending on what was recently shown on DTV. A generation of naive mystics who tell each other not acid nonsense, but the stories of the Red Hand and the Black Sheet, about the Black Climber and about aliens, and calling the spirit of Pushkin into an etheric connection. A generation of skeptics who believe in science, not superstition or religion. The last of the Grammarnatsi, who were still taught how to spell. The last of the Order of the Guardians in the memory of the Text Corps of Soviet and Progressive Foreign Science Fiction.

The last of the Earthlings, who at least imagine that all people are brothers, and at the end of the story, in fact, there should have been no eggs nailed to Red Square, and not even a doubling of GDP, but right here is a universal bright future.

Moreover, these peers of mine, the last strain of Soviet civilization, are for the most part still good people.

Pioneers who believed in something Tsoi, but never betrayed Cheburashka.

This is where the feature of our generation mentioned in the beginning stems from.

Soviet literary-centered childhood, school, TV and radio broadcasting system (from "Radionyani" to "Youth", with all stops at "Pionerskaya Zorka" and "Alarm clock"), Soyuzmultfilm and a network of specialized film studios raised completely different people than those whose parents the pedagogical chaos of the 90s fell under Spock and Montessori. Even more different from us, the last of the book readers, are representatives of the hyper-connected millennials, brought up by the already ubiquitous "rating-oriented" TV, and no less accessible and "rating-oriented" Internet.

This difference determined the unique intellectual and psychological aspect of the generation. In addition to having a more complex apparatus of moral and ethical attitudes, the former Soviet schoolchild is still more informed about the world around him, about history, about the Universe and all that.

On the Most Important Questions.

By the way, this is precisely why many pro-Soviet citizens, openly or imperceptibly for themselves, have so attacked Libya and Syria: they understand the scale of the threat.

The people of the "Yeltsin" era during it, apparently, tried to restructure their perception from the Soviet to the "modern, Western", and somewhere along the way they could not cope with the amount of information. That is why they took it for themselves for a worldview - rabid Western agitprop. Simply by virtue of its easy availability. Been there, done that.

One way or another, the result of the post-traumatic transformation of the axiomatics of a part of Soviet people (we now call them "liberals") was a sharp narrowing of their horizons. The maximum ambition is urbanism on the side of the City Hall.

It is not surprising that the problem of the consistent destruction of the centers of civilization in Arab countries is far, alien and invisible to representatives of this category of citizens, the Muslim threat for them is the swarthy janitor brought in by the bloody regime to replace their loved ones, they also do not sympathize with the daily victims of American drones, and in general , "Who needs us, let's hand over the Arctic and all missiles."

It is easy to understand that "Pokemon children", ie. Generation 00x, “the last of the Octobrists” at the moment are also hitting in the space of opportunities. If only because the last Soviet ones are now 30-40, and many have found their place in life (which will only be more difficult for young people, judging by the Western experience of an “aging society”).

Thus, over the next 10-15 years, the country has every opportunity to follow a course that will determine the emerging generation of the last Soviet people [of varying degrees of preservation]. Is this not a historic chance?

And an important advantage: only the last Soviet generation has a common field of meanings behind them, a set of role models, a single value structure - not used in practice, but not forgotten. The reference "The Drummer's Destiny", recorded subcortex. The code of the builder of something vaguely good, for everyone, for nothing, and so that no one leaves offended.

All the other living generations, acting on the sublunary stage or just entering the game of life, have no value system on which they could rely.

Hence - and the gangs of militant youth "on shit" and in fascist British brands, with vague ideas about reality, in search of an identity, the name of which they do not know.

Hence - and the throwing of the creative intelligentsia. Look at the "out of the cage" Kashin: a man rushes from Surkovism to liberalism, and from there - to the "Russian Field of Experiments." And what kind of experiment was he going to help put in the end? Launching Sputnik through Pogrom? Inconsistent, won't take off. Try to get the king back, a third of the population is no longer against it.

From here, activists of Navalny's civil projects, who are leaving for Thailand forever, will relax. There is enthusiasm, but there is no value behind it. Out of fashion - take it off immediately.

In short, confusion and vacillation.

One way or another, now, when the spiral of history enters a new round, we are entering a zone of turbulence. The generational conflict in power is described above, the geopolitical situation is unstable, the social system is not in its best shape, the economy is predicting a global seam, which is why the globalist ideological concepts that dominated for 20 years have exhausted themselves. Russia, on the other hand, is tired of vegetation, has given birth to children and wants to rush forward. At the same time, the frustrated society is not offered any milestone task or goal, and it, like a dog on fleas, rushes to small problems, biting itself. The vacuum of ideas requires filling, and by gravity is filled with all kinds of dangerous litter.

In such historical conditions, wars usually start, or adventurous fascist regimes are established. If you do nothing. But in general we were not taught that way - "to look coldly" when "Motherland is in danger!"

And the fact that our generation has a certain common ideological basis - not even a platform, just a coordinate system - is our huge historical advantage. “Die yourself, but help your comrade” (where the chant “one for all” actually draws its strength ...), “Treason to the Motherland is a terrible crime”, “A man is born for happiness, like a bird for flight”, and “It is impossible to become happy amidst the pain of the people ”- this is the basis to which one can always appeal. Gradually, this will make itself felt.

And in combination with the personal experience that many have acquired:

“I was happy not in the Maldives with a cocktail in my hand, not in a bank with an account statement, but on New Year's Eve, by a shining Christmas tree, in the Great Mighty Soviet Union, in terrible cotton tights, under a blanket, with a flashlight, over a good good book about the cosmic future of Mankind "-

... it creates a unique situation for us.

Maybe we are not the last strain of a forgotten and abandoned Soviet experiment to grow an ideal person, but seeds sent by our wise ancestors into the future.

To sprout - and make the future possible.

Ctrl Enter
Noticed oshЫbku Highlight text and press. Ctrl + Enter
We are
Even the most pro-Western Ukrainian politician Yushchenko understood the importance of dialogue with Russia.Evaluation of state and political figures: survey results
45 comments
Information
Dear reader, to leave comments on the publication, you must to register.