Vladimir Putin in Vietnam and South Korea: and return to Cam Ranh, and the abolition of visas

November 14 2013
93
A large-scale overseas tour of the Russian president takes place this week. The first point of the route was designated Vietnam, where on Tuesday Vladimir Putin arrived to meet with Vietnamese President Truong Tan Shang.


The official visit of the Russian leader to Hanoi was timed to the opening of the Days of Russian Culture in the Socialist Republic of Vietnam (this is the full name of Vietnam, making everyone understand that today not only states remain on the world map, but also very successfully develop states with a socialist management model).

Putin’s visit to Hanoi was announced, and the main highlight of all the announcements was that the meeting of the Russian and Vietnamese president could conclude agreements on the entry of the Socialist Republic of Vietnam into the Customs Union, which so far consists of Russia, Belarus and Kazakhstan. This was talked about both in Russia and in Vietnam, emphasizing that the current level of trade between our countries should be significantly increased, since it does not meet the interests of the economies. At the end of 2012, the volume of trade between the Russian Federation and SRV amounted to 3,66 billion dollars (according to information provided by the Russian economic bloc of the government) and 2,45 billion dollars (according to data sounded by the President of Vietnam). Despite the significant discrepancies in the estimates of trade, the leaders did not join the discussion on this issue, but decided that it was necessary to start an economic convergence that could bring mutual trade volumes to the 10 level of billions of dollars by the 2020 year.

The economic rapprochement should be expressed in the creation of a free trade zone between the Russia-Belarus-Kazakhstan trophy and Vietnam and the simultaneous entry of the Socialist Republic of Vietnam into the Customs Union. Negotiations on this topic between representatives of the CU and official Hanoi have already started, and if they do not keep up with the planned schedule, then the end of the negotiation process should be expected in 2014 year. This, in particular, said Truong Tan Shang. 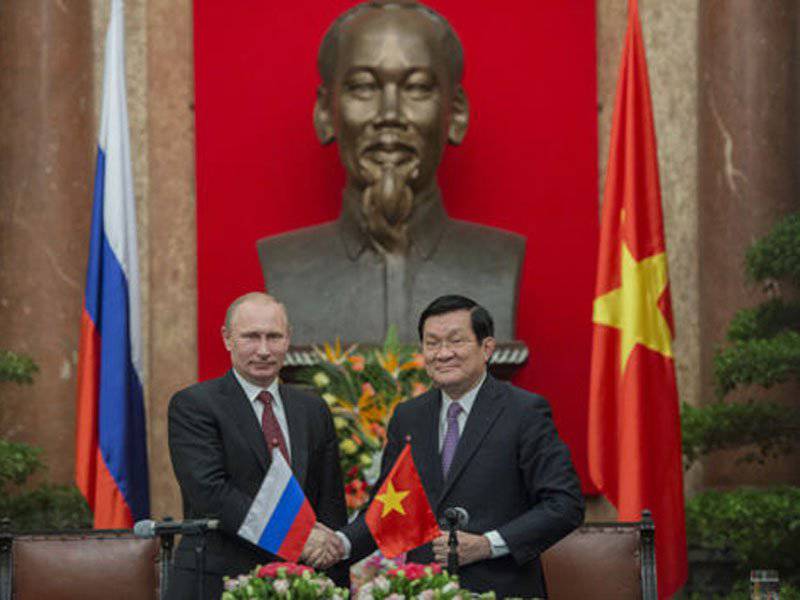 If we talk about the economic contacts of today's day, then it should be noted that the main inflow of Russian investments in Vietnam falls on the energy sector - more than 1,5 billion dollars. This, as the leaders considered, is not enough, and cooperation needs to be developed. There are starting points for development. This is the tourism industry (in 2012, the number of Russian tourists visiting the NRW was about twice as large as in 2011 — according to Vladimir Putin). And besides, it is an export to Vietnam of Russia weapons. In recent years, Vietnam has become one of the three largest importers of Russian weapons and military equipment.

It was with the development of cooperation in the military-technical sphere that one of the negotiation lines between the presidents was connected. It's about a procurement contract for a Vietnamese military fleet diesel submarines of project 636 "Varshavyanka". The first submarine has already been transferred to the Vietnamese fleet last week. In total, Vietnam plans to purchase 6 of these submarines from Russia. It is noteworthy that Russian-made submarines are going to be based in the port of Kamran - the very one where, until 2002, the Russian military base was located. Recall that in 2001 the Russian authorities decided not to renew the lease with Hanoi, since, according to the then Foreign Minister Igor Ivanov, for more than ten years the Russian fleet had not used the services of the naval base (naval base) in Kamrani and did not go to the Indian Ocean. Today it’s coming out, and therefore it’s possible to use it ... Perhaps that is why the word “Kamran” again appeared in the speeches of representatives of the Russian authorities.

After the meeting of the two presidents, it became known that in Kamrani it was decided to open a military-technical base, where repair and maintenance of warships of various projects and modifications will be carried out. Russian specialists will also be connected to the work of the military-technical base. This information instills a certain optimism and allows us to allow a cautious judgment that Russia returns to Cam Ranh a decade later. Of course, it is too early to talk about the opening of a full-fledged Russian naval base here (in the Vietnamese port of Cam Ranh), but the first step has been taken. The likelihood of the next steps is also great, especially considering that Vietnam in the near future may find itself in a single trade and economic field with Russia and its other closest partners - Kazakhstan and Belarus. This probability is also great because today Vietnam needs a strong ally due to the increasing influence of China in the region. Russia may well play the role of such an ally - an ally, not to oppose China (openly ally with someone against China today is more expensive), but an ally who, by its presence in the region, can cool excessively hotheads (even Chinese -or else). Well, in fact, it’s not just the Vietnamese who remember very well how the star-striped people "helped" their country ... not the Americans, in fact, invite Americans ... Half the world, the phrase "American allies" pushes at least to the urge to vomiting

In addition to the agreements on the opening of the military-technical base in Cam Ranh (agreement on military cooperation between the Russian Federation and Vietnam) and the start of active work on the incorporation of the Socialist Republic of Vietnam into the Customs Union, the Russian and Vietnamese parties signed a number of other documents. Highlight some of them.

For example, a memorandum has been prepared between Rosneft and PetroVietnam, an oil and gas company of Vietnam, on mutual understanding regarding the possible acquisition of a stake in the Production Sharing Agreement regarding the 15-1 / 05 block on the continental shelf of the Socialist Republic of Vietnam.

Memorandum on the development of cooperation in the framework of the project of IC Rusvietpetro LLC between JSC Zarubezhneft and PetroVietnam.

Agreement between OAO Gazprom and PetroVietnam on the establishment of a joint company for the production of gas engine fuel in the Socialist Republic of Vietnam.

Thus, Rosneft has the opportunity to work on two fields of the Vietnamese shelf. Gazprom Neft acquired a stake in 49% of the Dung Quat refinery from the Vietnamese side.

And also - agreements in the educational and medical fields, law enforcement and accreditation policy. Total - 18 agreements. One of the most noteworthy documents was the document regulating cooperation between the Research Institute of the Rubber Industry of the Russian Federation and the Ho Chi Minh Mausoleum Management Committee. This document contains information, quotation "on the transfer of technology for the production of rubberized fabric based on Vietnamese silk and special overalls from it." Honestly, it is not entirely clear why this issue reached such a high level (they discussed it during the meeting of the presidents) ... But this, as they say, is different история.

After visiting Vietnam, Vladimir Putin went to the Republic of Korea (South Korea). Here the Russian president met with President Park Geun-hye. Here we are also talking about trade and economic cooperation between the two countries. South Korea, of course, is not knocking on the Customs Union, but there are enough reasons for increasing the trade turnover between the Russian Federation and the Republic of Korea. 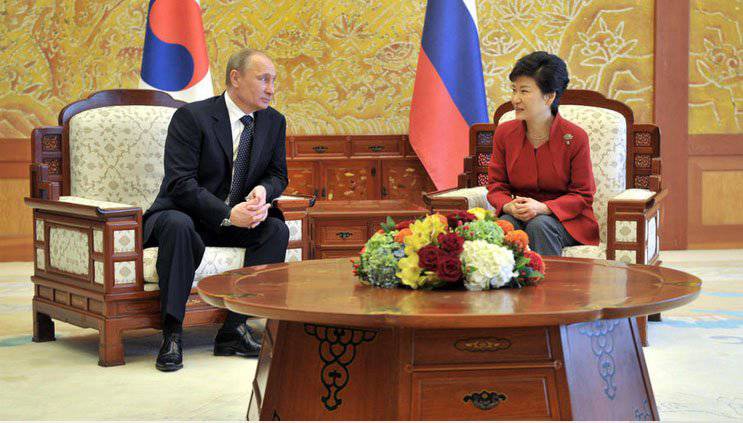 One of the possible areas of cooperation is the investment of Seoul in the construction of the Russian Vostochny cosmodrome near Uglegorsk (Priamurye). President Putin called on Korean business to participate in a large and profitable construction project.
In addition, an important component of the visit was the discussion of the start of construction of a gas pipeline that will connect Russia and South Korea. Putin proposed to the Korean colleague two options for construction: on the bottom of the sea and through the territory of the DPRK. The first, as Putin noted, is complicated and expensive, the second is ideal, if you just put the political problems out of the picture ... Plans for gas supplies to South Korea are 12 billion cubic meters of “blue fuel” per year.

Interestingly, before the start of Vladimir Putin’s visit to Seoul, some South Korean newspapers came out with articles in which the expression “ruler of the modern world” is applied to Putin, and, interestingly, without any irony. After these South Korean epithets, our president’s main thing is not to fall into euphoria, but to work in a productive manner ... It should be noted that the same South Korean publications emphasized the priority of Putin’s visit to Seoul, not to Pyongyang ... Now it remains to hope that Kim Jong-un it will not cause an “uncontrolled” reaction.

At a meeting with South Korean President Park Geun-hye, who, incidentally, is Putin’s age, discussed the fight against terrorism, the process of eliminating chemical weapons in Syria and agreed to abolish visas between Russia and the Republic of Korea. Naturally, it was a question of a peaceful settlement on the Korean Peninsula, and Vladimir Putin called for the early resumption of the six-party talks that could move the situation from a dead end. In addition, the Russian president urged his South Korean counterpart to be more attentive to the use of the Northern Sea Route for cargo transportation, and also recalled the need to develop cooperation in the construction of railways (the Trans-Korean trunk line, which can connect Russia with the ports of South Korea).

Ctrl Enter
Noticed oshЫbku Highlight text and press. Ctrl + Enter
We are
Kamran: time to scatter stones, time to collect themResults of the week. "A thief should sit in jail!"
93 comments
Information
Dear reader, to leave comments on the publication, you must to register.