The fine line between gift and bribe 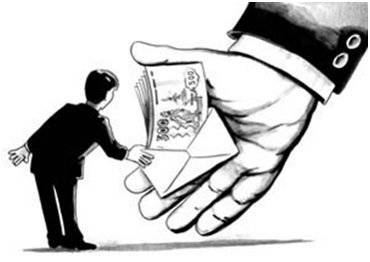 It’s not so easy to pick a gift for a New Year or Birthday. Many come out of such a difficult situation simply enough, preferring to order gift basketsIn which you can put a “grocery set”, the main decoration of which can be elite chocolate and alcoholic drink - for example, real French champagne or Scotch whiskey from the manufacturer Chivas.
If you donate alcohol sets and candy boxes abroad, this set is considered to be an excellent gift in Russia. It is presented not only as a gift to a certain person for a holiday, but also as a gratitude for the service rendered.
For some time now, a legislative provision has begun to operate in Russia, according to which gifts can be presented to officials and various employees occupying municipal or state posts. At the same time, the total cost of one such gift should not be higher than 5 of the size of the minimum wage. If you scored more than five minimum wages in the gift basket, then such a gift can be regarded as a bribe. And there are cases when officials must make the received gifts in the income statement. But only so far in Russia there has been no case in which the phrase “gift basket with chocolate and a bottle of Clicquot” would appear in the official income statement.
For a few years now, a joke has been walking about the thin side of switching a gift to a bribe status on the Internet: in order for a gift not to become a bribe from a donated person (state official), it is necessary to demand a surrender on receipt of the size of five minimum wages. In this case, he will have to avoid criminal liability.
In a number of foreign countries, officials at the legislative level are prohibited from taking anything as a gift from anyone other than their own family members. At the same time, it is not clear how such officials celebrate their birthdays and anniversaries, because on a holiday even a gift from friends cannot be received. Strict legislation in this regard - in Scandinavia, in the countries of North America. Officials of a number of CIS countries and, for example, the countries of the Persian Gulf are not limited in gifts. Here you can give everything to statesmen, if only the gift had a legal origin. The most popular gift to the monarchs of the Arabian Peninsula is cold weapon or dear horse.
Ctrl Enter
Noticed oshЫbku Highlight text and press. Ctrl + Enter
We are
Holiday "invisible" soldiers. To the Day of Military Intelligence of the Russian FederationChristmas gifts for children Novorossia. Part of 2. Report №13