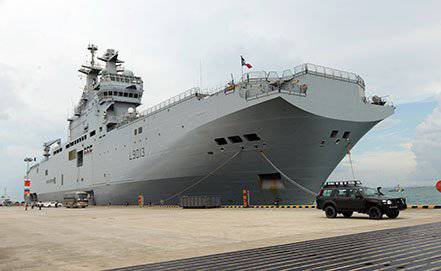 All technologies for amphibious helicopter-carrying docks / DVKD / Mistral-type, including the SENIT-9 combat information and control system, France will transfer to Russia with guaranteed orders for the Russian Navy's 3 and 4-th ships. This was announced today by ITAR-TASS source in the military-industrial complex of France.

“When signing the contract for the first two helicopter carriers, it was stipulated that all the ship’s technologies, which the Russian side insisted on transferring, will be transferred with a guarantee on the order of the 3 and 4, the Mistral,” the source said.

The interlocutor recalled that during the pre-contract negotiations, the dispute went around two ship control systems of the NATO standard - the combat information-control system SENIT-9 and the command connection control system /fleet/ SIC-21.

The contract worth 1,15 billion euros for the construction of two Mistral-type helicopter carriers for the Russian Navy was signed in June 2011 in St. Petersburg. The contract provides for the construction of the first two ships at the STX shipyard in the French Saint-Nazaire. The first ship "Vladivostok" was launched and according to the plan will be handed over to the Russian Navy at the end of 2014, the second ship "Sevastopol" - in 2015.

October 15 2013, at the launching ceremony of the first Vladivostok DVKD in French Saint-Nazaire, Andrei Vernigora, head of the Russian defense department’s state defense order, said that the decision to build two more Mistral-type ships could be made only after Russia will receive practical experience in operating such helicopter carriers. "The decision on the 3 and 4-m DVKD has not disappeared. First, we must get the first ship and get experience in its operation," - he stressed.

What else the Russian Navy plans to buy in France

In addition, according to a source in the French defense industry, the Russian Defense Ministry plans to order two types of boats for Mistral-type ships. “The Russian side has requested two types of means for landing on the coast for testing - high-speed boats STM and catamarans L-CAT,” the source specified. “And in the plans of the Russian Navy there are procurement of both types.”

He stressed that four STMs or two L-CATs (E-DAR French name) can be placed in the Mistral helicopter carrier dock, or perhaps mixed placement - one L-CAT and two STMs. “There is a possibility that the Russian side will prefer the last option,” the source said.

“However, so far the Russian military department has not submitted to the French side the final technical requirement for equipping boats with Mistral-type amphibious assault ships,” he added.

Technical characteristics of the ship "Mistral"

Ships of the Mistral type have a displacement of 21 thousand tons, a maximum hull length of 210 m, a speed of up to 18 knots, a cruising range of up to 20 thousand miles. The crew is 170 people, in addition, a helicopter carrier can take on board 450 people. The air group includes 16 helicopters, six of which can simultaneously be placed on the take-off deck. The cargo deck of the ship can accommodate more than 40 tanks or 70 cars. Mistrals are capable of performing four tasks at once: take in helicopters, land military units on land, be the command center and a floating hospital.

Ctrl Enter
Noticed oshЫbku Highlight text and press. Ctrl + Enter
We are
Mistralnaya epic: failure, reprimand and "Rhinos"Mistral DVKD transfer: France continues to drag out time
31 comment
Information
Dear reader, to leave comments on the publication, you must to register.