Ivanov urged to revive the personnel policy of the USSR 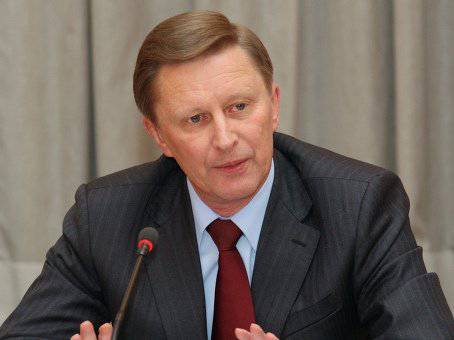 The head of the presidential administration of Russia, Sergei Ivanov, at a seminar with the vice-governors on domestic policy on Wednesday called for reviving the personnel policy of the USSR, since "no one has yet come up with the best."

“In the Soviet Union, the personnel policy was fairly well built. There were certain filters, steps through which people passed. I will not hide, they were looked after in a good sense of the word - there were mentors, people “led”. If they proved with concrete deeds that they were successful, they were transferred to Moscow, appointed to higher positions in the region or in the central offices of ministries and departments, ”Ivanov said.

“It (the personnel policy) was destroyed in our country, it needs to be revived, I don’t see anything wrong with that - no one has thought up anything better and will not invent it,” the head of the Kremlin administration added.

In addition, Ivanov proposed to consider the establishment of additional responsibility for the heads of municipalities, who do not solve the problems of the population, RIA “News».

Ivanov explained that the head of state receives a large number of appeals asking them to solve problems that are within the competence of regional or local authorities.

This “shaft of letters,” according to him, suggests that citizens do not find a response on the ground, as well as “closedness and indifference of local officials and a low level of trust in them.”

“We have enough power to cope with the solution of most issues and not to force citizens to constantly bring local problems to the state level. Perhaps, in this case, it is worth thinking of establishing additional responsibility for the heads of municipalities, which exist in isolation from the rest of the population, ”said the head of the administration.

"Why everything should be decided in the Kremlin or in the White House, until the light bulb is replaced," Ivanov asked the audience.

Ivanov believes that the regional authorities should act proactively in solving international problems and it’s harder to ask employers who hire migrant workers to work.

“Here we have to work ahead of the curve, remove the urgency of social problems, competently organize the labor market and much tougher than now, ask employers who use foreign labor,” Ivanov said on Wednesday at a seminar with the vice-governors for domestic policy.

He stressed that it was employers who make profits, not workers.

“The lack of attention to potential points of tension is an indicator of the lack of professionalism of the authorities, evidence that she does not know the situation well or is perplexedly takes a wait-and-see attitude on the principle of“ maybe resolved ”. It will not resolve, ”he stressed.

Ivanov recalled that interethnic conflicts are the result of "unsolved social problems, the unsatisfactory work of law enforcement agencies and poor educational activities."

He urged regional authorities to be in constant contact with law enforcement agencies, national communities and youth organizations, to involve representatives of Russian traditional religions in preventive work, and also to conduct “offensive information policies, counteracting the spread of extremist materials”.

Also, the head of the administration spoke in favor of creating special councils on interethnic relations in the regions.

Ctrl Enter
Noticed oshЫbku Highlight text and press. Ctrl + Enter
We are
Project Falcon 9. Successful landing of the first stage and market prospects
50 comments
Information
Dear reader, to leave comments on the publication, you must to register.