November 15 2013
6
In mid-October, the Turkish construction battalion began the construction of a barrier wall on the border with Syria in the Nusaybina region (Mardin province). The stated goal of the construction of a two-meter-high barrier is to stop the movement of Kurdish militants and armed Islamists from Syrian territory to and fro. If we recall that the mentioned province of Mardin is inhabited mainly by Kurds, it becomes clear: first of all, Ankara closes the road to the country for Syrian Kurds, who, under Assad, received a blank check to create their own armed detachments and fight against the Syrian terrorist organization now two and a half years. 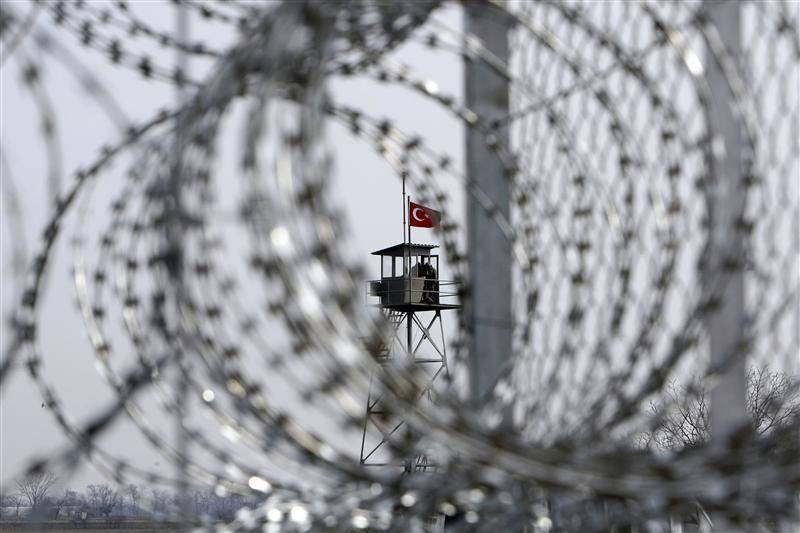 In early November, the media reported on a mass rally that citizens had planned to hold on November 7 in Nusaybin. The protesters announced that they would protest against the construction of the border wall. Locals believe that the “wall of shame” is being built in order to isolate the Kurdish population of the two countries.

Amur Hajiyev ("Voice of Russia") told that the rally was pushed by the hunger strike conducted by Ayse Gokkan, the mayor of Nusaybin. The purpose of the hunger strike is to induce the Turkish authorities to abandon the barriers.

Why is the wall being built in the Nusaybina region causing such strong emotions? The resident of the Mardinsky regional branch of the pro-Kurdish Peace and Democracy Party in Turkey, Reshat Kaymaz, told the Golos of Russia about this:

“We have been holding actions against the construction of this“ wall of shame ”for several days. All our deputies are actively involved in this. The decision of the mayor of Nusaybin Mrs. Ayse Gokkan to hold a hunger strike was a serious motivation for all. We fully support her action and declare: her demands are our requirements too! ”

According to him, the rally is directed against the “wall of shame”. Ankara must understand that the Kurdish people cannot be separated by barriers. Moreover, a customs checkpoint should be opened on the border line between Nusaybin and Syrian Kamyshly - for trade and delivery of humanitarian aid. The Party of Peace and Democracy opposes the policy of the Justice and Development Party, which opens state borders and checkpoints for gangs, but closes them for ordinary people, the co-chair said.

As for the government’s statement that the wall is being built to ensure security - due to threats emanating from Syria - the politician notes that there is no such problem in this area. A number of Kurdish areas in Syria came under the control of the Party of Democratic Union (PYD), and Turkey stopped facing the problem of border security in the area.

“Our citizens are dying not here, but in Akchakala, in Ceylanpinar, that is, in those places that are located not far from the areas under the control of the Front of al-Nusra.” It is there that the problem of ensuring national borders is acute. But Turkey itself is to blame for this. It trains al-Nusra militants on its territory.

Kaymaz’s theses indirectly confirmed the 7 events of November: Nusaybina’s police dispersed the protesters with water cannons, plastic bullets and tear gas — just as they had accelerated demonstrations before. Democracy in action!

The protest was attended by several thousand people. The demonstrators compared the wall being erected to the once-existing Berlin Wall.

The press got information that Turkish Foreign Minister M. Güler denied the very fact of building a barrier wall in the province, but later said that the wall is being built and its purpose is to ensure the security of the border. This is another example of democracy in action: first say no, then yes. Negation is followed by negation of negation. Somewhere here, between “no” and “yes”, the real border between the people and the government passes. That border, which is something worse than barriers and barbed wire.

Syrian Kurds gave a peculiar response to the construction of border barriers. They announced the creation of a transitional government in Syria.

Syrian Kurds living in the northeast, 11 November announced the creation of an independent transitional government. Reports about it "Lenta.ru" with reference to France Press.

The declaration signed by the Kurds following the results of the negotiations in the Syrian city of Kamyshly implies the division of the Kurdish territories into three areas. At the talks, it was decided to begin preparations for local and general elections.

However, so far not all Kurdish groups have joined the initiative. The declaration was signed by the Democratic Union Party and several small organizations. But the Kurdish National Council (the second main military-political force of the Syrian Kurdistan) refuses to participate in the agreement.

The decision to create a transitional government was made after the successes of the Kurdish militia: over the past few weeks, the Kurds conquered significant territories from the Islamists.

Thus, the construction of the Turkish "Berlin" wall is clearly tied to the growth of the Kurdish movement and the successes that Kurdish militia achieved in the fight against Islamist mercenaries who are fighting either for Sharia in Syria or for ordinary money. For understandable reasons, the Erdogan government fears that the Syrian Kurds may one day unite with the Turkish.

The Turkish authorities are most likely familiar with the report Global 2030 Trends: Alternative Worlds, which the US National Intelligence Council issued at the end of 2012. It was noted that the Kurdish state will appear in the region, which will strike at the territorial integrity of Turkey. Moreover, the emergence of this new state will be the reason for the formation of new borders in the Middle East. Experts also predicted that the Kurds living in Southeast Anatolia would have an average of four children per woman by the year 2030. Bottom line: an increase in the number of Kurdish population in the Turkish territory.

In addition, it is widely known that the project "Kurdistan" is secretly endorsed by Washington. Why? The reason is simple: Americans have long wanted to redraw the map of the region, having acquired a more loyal ally than Turkey or Iraq, whose prime minister last year made it clear to the White House that his country was not someone’s patrimony. Prime Minister Erdogan, despite the participation of his state in NATO, is also not considered to be a loyal American satellite in Washington and every now and then “falls” out of the American orbit. At the same time, the “project” is beneficial to the Americans because Kurds also live in Iran (although with the latter, Washington is now trying almost to make peace, which cannot be said of a US ally such as Israel). In Syria, there are also many Kurds, and the American hawk congressmen, the military-industrial complex, and President Obama are also very friendly against the official Damascus, if you recall the recent attempts to attack this unfortunate country with Tomahawks. In a word, consolidated Kurds can arrange such an “Arab spring” in the Middle East that Erdogan or al-Maliki did not even dream in the most terrible nightmares. Then you can turn to the theory of “controlled chaos” ... The financial crisis is hampered by the Americans along with the large public debt and the big problems in internal governance associated with the political opposition of the republican part of Congress and the president.

Therefore, reshaping the borders of the Middle East through the Kurdistan project is more likely to be in the realm of science fiction than in the future geopolitical reality. However, the wall in Nusaybin is one of the precautionary barriers to this particular project.

Observed and commented on Oleg Chuvakin
- especially for topwar.ru
Ctrl Enter
Noticed oshЫbku Highlight text and press. Ctrl + Enter
We are
Turkey against the Kurds. Is there a new phase of conflict ahead?Results of the week. "A thief should sit in jail!"
6 comments
Information
Dear reader, to leave comments on the publication, you must to register.