Nikolai Starikov: “How can you compare who is“ cooler ”- Suvorov or Kutuzov?” 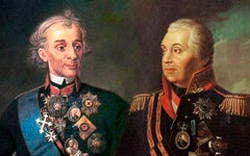 A well-known publicist criticized the fashion that came from the West for ratings.


The All-Russian educational name Media Project “Victory Name”, which started in RuNet, already at the start acquired a certain scandalous aftertaste. The reason is that, as we have already written, in the list of great commanders and military leaders there was suddenly no name with which our fathers and grandfathers attacked in the Great Patriotic War.

But on this list were figures either random or with more than controversial merits to the army and fleetor those whose heritage has yet to be appreciated. Meanwhile, petitions demanding the return of Stalin to the list of the great military leaders of our country are already being addressed to the organizers of this competition.

In a conversation with the KM.RU columnist, his attitude towards the incident with the absence of the Generalissimo I.V. Stalin in the list of commanders and to the contest “Name of Victory” shared the co-founder of the party “Great Fatherland”, a famous historian and journalist, author of the book “Stalin. We remember together "Nikolay Starikov:

- Culture Minister Vladimir Medinsky in an interview with “Vesti” explained the absence of Stalin in the list of great military leaders by the fact that the organizers of the competition decided not to include state leaders in it. Like, then it was necessary to include all general secretaries and presidents. Are you satisfied with this explanation?

- I have great respect for Vladimir Rostislavovich Medinsky, but in this case it’s very difficult for me to agree with him. Neither Gorbachev nor Yeltsin, being supreme commanders, did not conduct any successful military activities. Thank God that a war of such magnitude as the Great Patriotic War was in our stories only once. Therefore, it is simply impossible to consider Joseph Vissarionovich Stalin apart from the leadership of the armed forces during the war. He was truly the Supreme Commander in the full meaning of this post, and in many respects we owe him our victory over the enemy.

Of course, in the victory over Hitler there is the contribution of every Soviet soldier, every general, every marshal, but, as the liberals usually say, it was impossible to defeat Stalin in spite of it. If we stick to this point of view, then let us ask ourselves: why didn’t the Germans win against Hitler, why didn’t the French win against Napoleon? The role of the commander, the role of the individual in the history of military conflicts is largely decisive.

- So why, then, Stalin was not honored to stand in the same row with the great Russian commanders?

- I think the situation is as follows. The organizers of this “competition” logically calculated that Joseph Stalin, if he were on the list of great commanders, would surely take first place in it. After all, people voting for him would rate not only the leadership talents who, of course, were present at the Generalissimo, but first of all his state talents. And the result of this vote would therefore be predictable in advance. And why such a probability obviously did not suit the authors of the competition - a separate question. But if Lev Trotsky is a commander among them, then those who made this list can definitely be suspected of “light Trotskyism”, because, of course, he was not a commander. He was an orator, a writer, and was also associated with the world behind the scenes and brought great misfortunes to Russia.

- In general, the presence of individual names in the list of great military leaders and the absence of others has already become the reason for a lot of heated disputes and gossip. Do organizers of such contests need to try not to touch someone with a particular name? Or is historical truth above all?

- The fact of holding such competitions is in itself somewhat dubious, and I, frankly, do not quite understand its meaning, I do not understand the need to single out the best of the best, sifting out at the same time doubtful personalities like the same Makhno, for example. But if a contest is being held, then all names need to be added to the voting list, regardless of whether someone will like particular names or not.

After all, there really was a Caucasian war in Russia. Is it a secret? On the part of Russia, General Yermolov took an active part in this war, but, in addition, he participated in the 1812 war of the year, in which he accomplished many feats. On the part of the mountaineers, military actions were led by Imam Shamil. And what, is it a secret? Not at all! But this war, firstly, has long ended, and secondly, its outcome was that Shamil took the oath to the Russian state, after which the mountain elite remarkably merged with the Russian one, and the conflict was completely settled.

And today's attempts to reanimate these wars, to return to them and to pick them up again for a long time, thank God, the healed wounds are just such a political situation. There is no need to depart from historical truth. There was Shamil, there was Yermolov, there was a war, but it ended more than 150 years ago, and today Russia is united and indivisible within the borders in which we live.

- I do not see a great patriotic education in comparing the leadership talents of Nestor Ivanovich Makhno and Lev Davidovich Trotsky. Honestly! And all the more there is nothing bringing up in their comparison, for example, with Marshal Zhukov. This is not a patriotic education, but a thoughtless, unjustified adherence to Western patterns. After all, this fashion came to us from the West for all sorts of “tops,” “ratings,” “hot twenties” ...

This is a slice of the Western consciousness: they think so, with such categories of show business. In Russia, over the thousand-year history, there were many truly great commanders, and why do we need to rank them? If we start to find out who is “cooler” - Alexander Suvorov or Mikhail Kutuzov, it will not lead to anything good in the end. We need to talk more about all the generals, about all the heroes of Russia. This is, in my opinion, the surest method of patriotic education.

Ctrl Enter
Noticed oshЫbku Highlight text and press. Ctrl + Enter
We are
About Stalin and KhrushchevOn the other side of the “red” and “white”. Izborsk Club Report
67 comments
Information
Dear reader, to leave comments on the publication, you must to register.