November 14 2013
16
Recently, I managed to visit the Sukhoi Design Bureau and look at a new procedural simulator designed for training pilots of the Su-35 multi-role fighter.


Su-35 is a deep upgrade of the Su-27 and belongs to the 4 ++ generation. The aircraft is designed to gain superiority in the air, as well as for the destruction of airborne ground and surface targets. 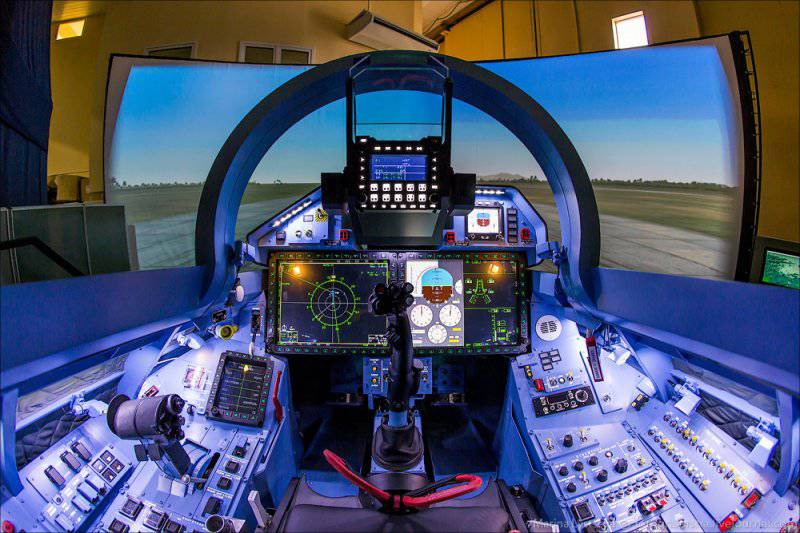 2. The aircraft uses fifth generation technologies, which provide superiority over fighters of a similar class. Distinctive features of the Su-35 from the Su-27 are: new high-thrust engines with UHT, a wide range of aviation means of destruction, a new complex of avionics based on a digital information and control system, a new complex of onboard radio-electronic equipment with a phased antenna array and a two-stage hydraulic drive. This antenna allows detecting a fighter-type target with a flight dispersion efficiency of three square meters at a distance of about 400 km. 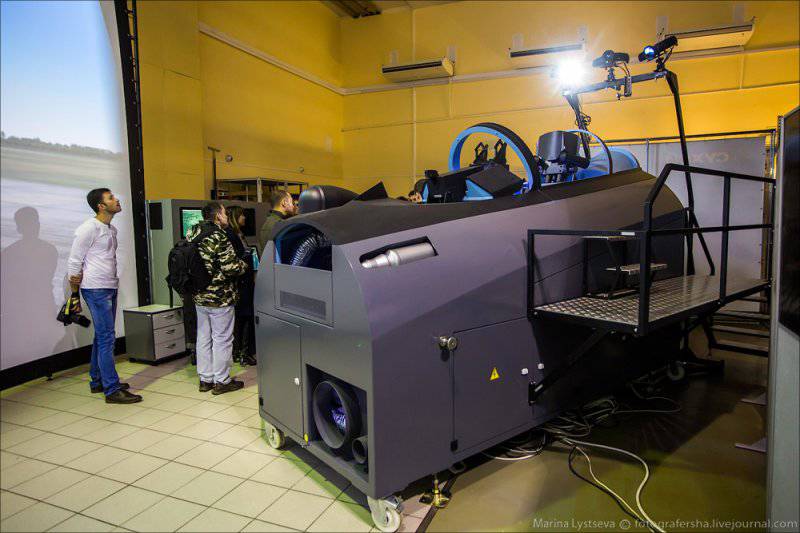 3. The aircraft has ultra-high maneuverability at low and near-zero speeds. This feature is provided through the use of a special aerodynamic layout and the latest engines with thrust vector control.
The high information content of the cockpit reduces the functional load on the pilot. 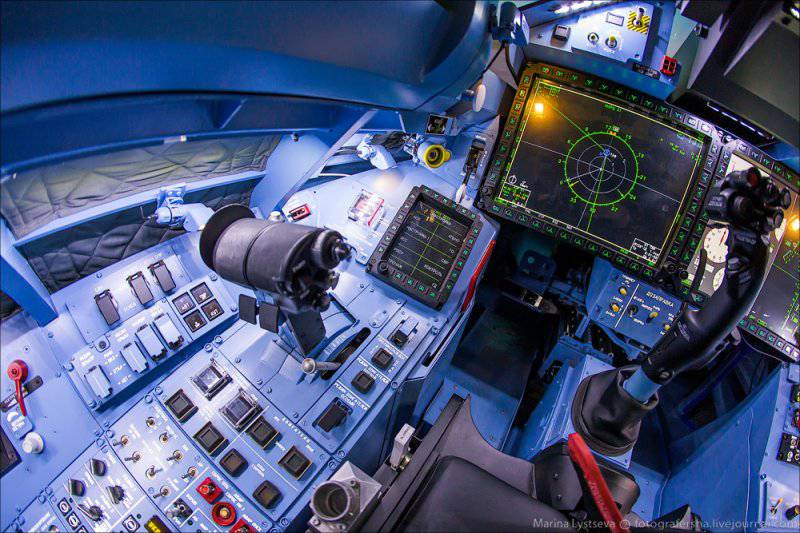 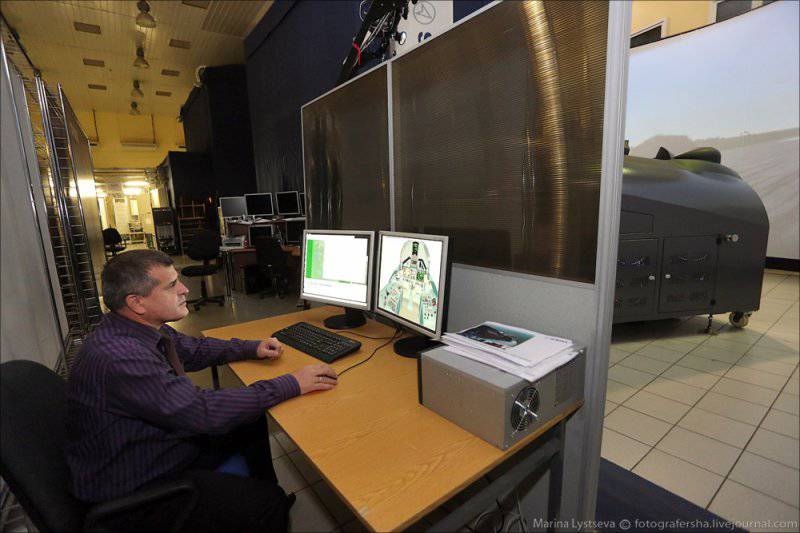 5. In the classroom there is a theoretical training with automated knowledge control, the elements are worked out on a procedural simulator and then on a complex one that is as close as possible to a real cabin (a closing lantern, a tether system, a dome with spherical visualization 270х110 group) and it is possible to work out almost all tasks. 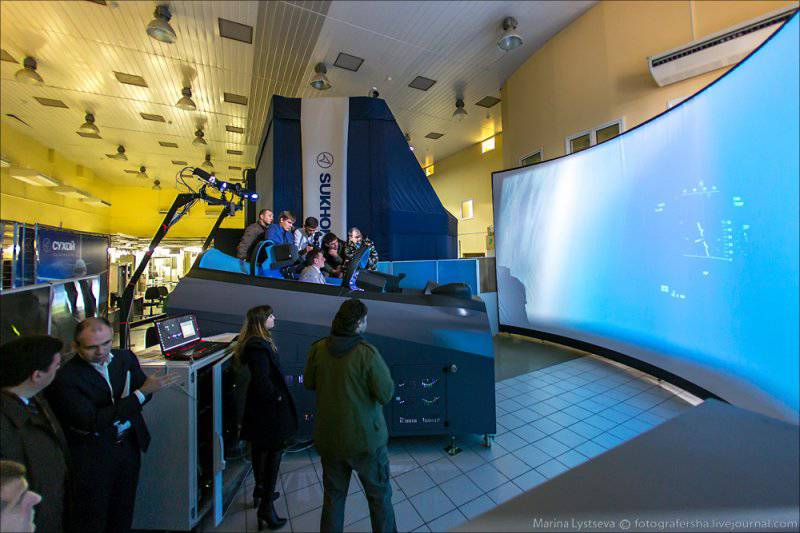 6. Up to 16 simulators can be combined into a single network and at the same time carry out group training of pilots. Over time, it will be possible to combine different types of simulators into one information environment - a simulator training complex. In the future, it is planned to combine simulators of other Russian developers.
The integrated simulator is deliberately not equipped with a mobility system because the system will be able to simulate only a small part of their large range of highly maneuverable fighter overloads, which will lead to the implantation of false skills. 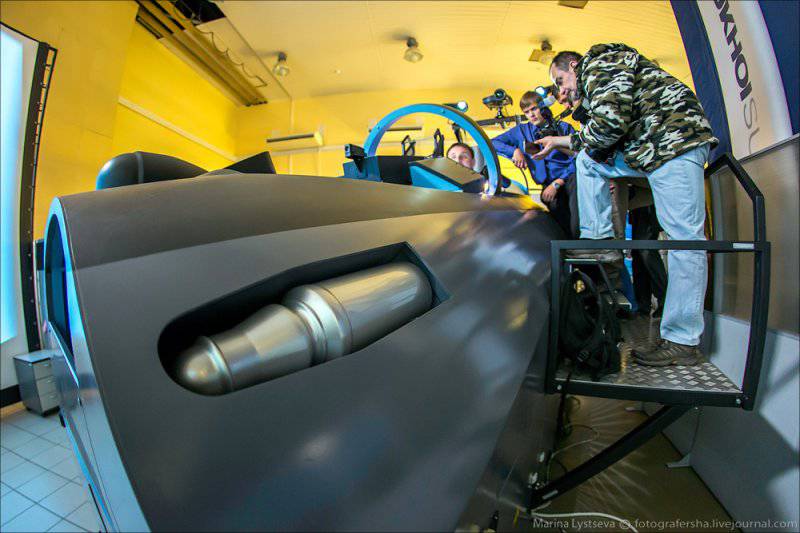 7. On the simulator, you can perform almost all the same tasks as on the plane, including depicting refueling and, most importantly, working off emergency situations. In this simulator even surpasses the aircraft, because in reality it is dangerous and sometimes impossible to simulate some abandoned situations. And this is one of the key functions of the simulator. 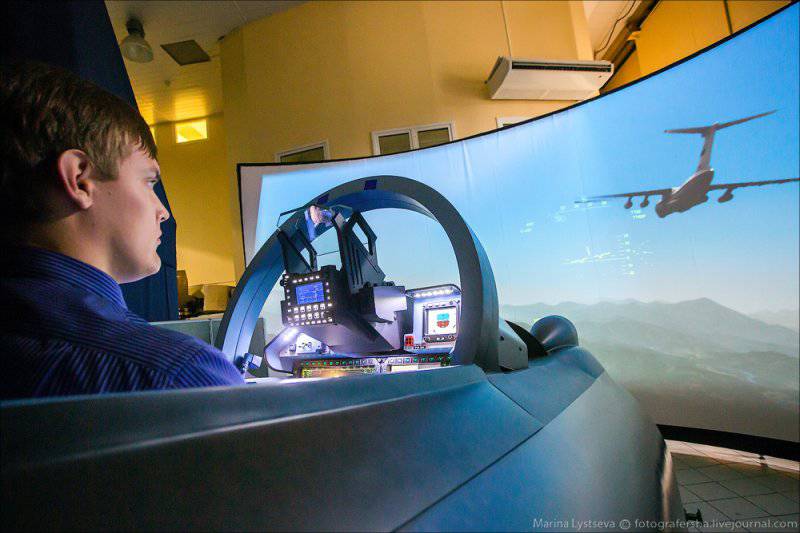 8. What does a simulator look like?
The workplace of the Su-35 pilot in a complex simulator is a closed cabin of a ventilated type, where there is everything necessary for comfortable performance of combat missions.
Here we have a procedural simulator, it is without a lantern. Table with monitors in the background - RMI. 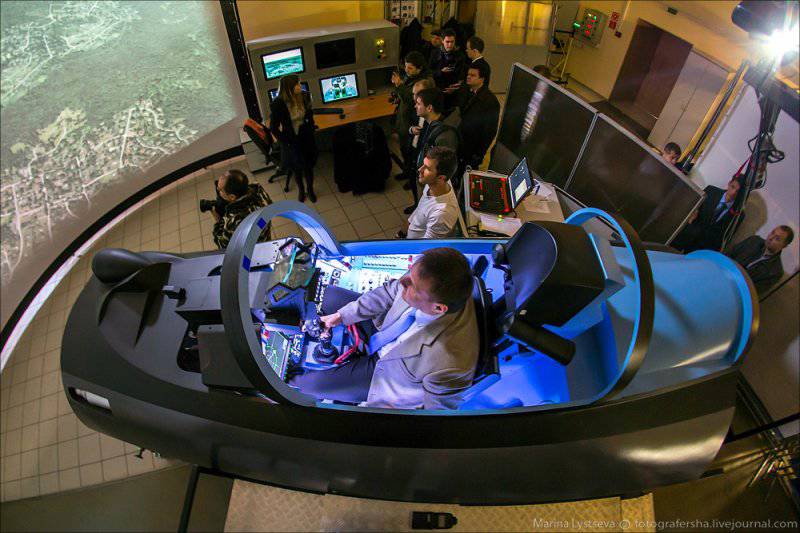 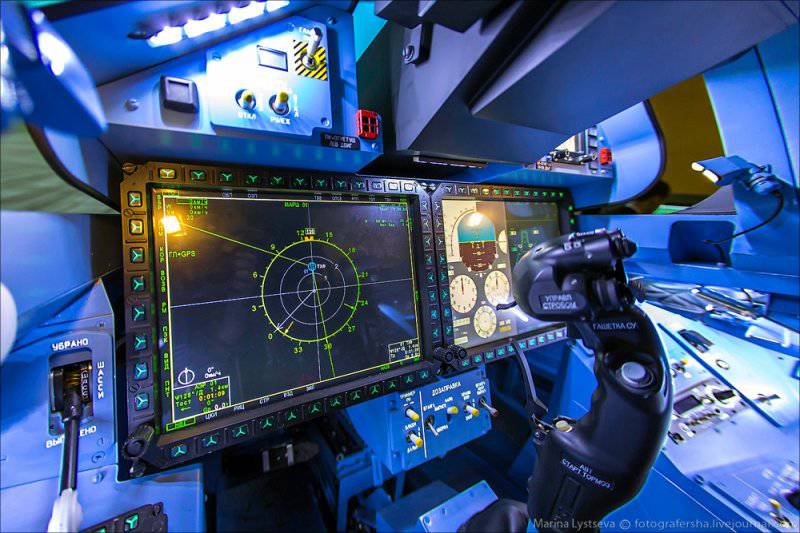 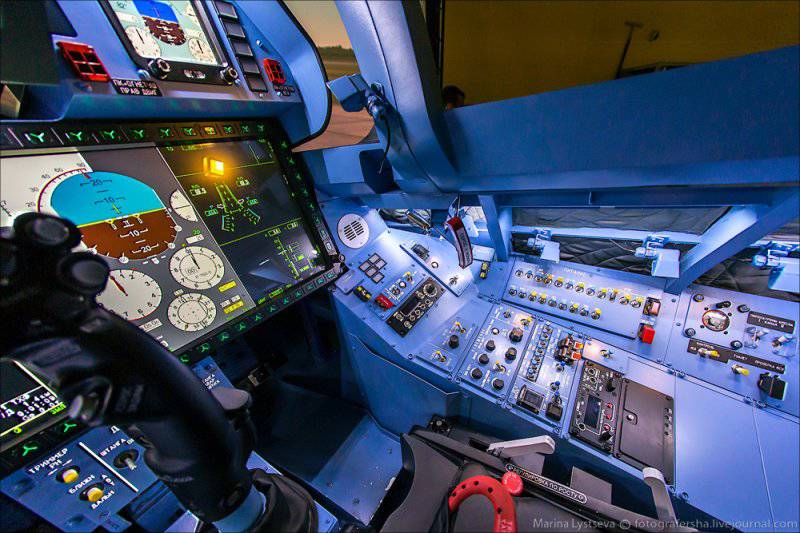 11. A multifunctional remote indicator with a working field 4х5 '(hiding on the side panel behind the aircraft control stick) is used to tune all aircraft systems, including radar, aiming and navigation equipment, weapons, video recording systems.

Automatic control unit and automatic control system. It allows you to maintain a given speed without any pilot participation during any maneuvers and in any conditions or fully automatically guide the aircraft along the route in accordance with the flight task. At the same time, the pilot’s task is only to take off and land, as well as to decide on the use of weapons. 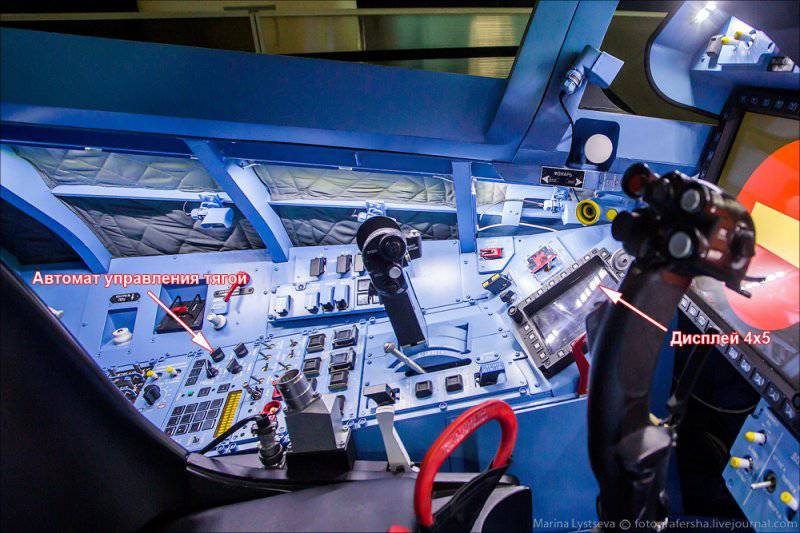 12. The monitor on the left is the multifunctional display of the MFI-35 15. The pilot can divide the display into several parts and display any necessary information about the flight task, navigation, armament, and the technical condition of the aircraft using button framing. The purpose of the multifunction buttons changes depending on the nature of the displayed information, the corresponding tooltips are displayed next to the buttons.

The lower part with the information on the monitor on the left is the control line of the CCD mode (on-board equipment complex). There are only five modes of the BWC - close and long-range combat by air, short-range and long-range combat on the ground, plus navigation mode. Each mode provides a specific set of information displayed on the displays and a pre-selected weapon. 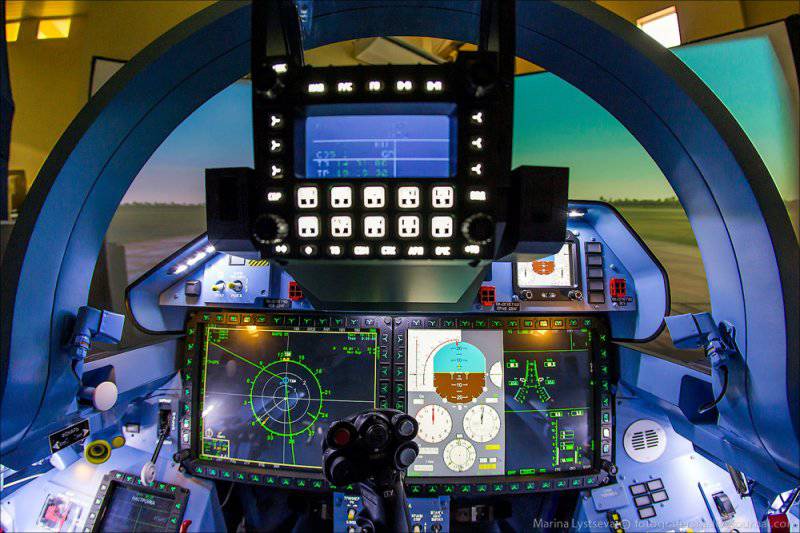 1 - Button for disabling the automatic control system (ACS). Also under the pilot's little finger is the lever for temporarily deactivating the ACS: moving on autopilot, the pilot presses the lever and manually performs a maneuver, after which the ACS continues to steer the aircraft along a new course.
2 - Four-position mode switch of the BWC to select the combat and navigation modes of the onboard equipment.
3 - Bring button to the horizon. In case of loss of orientation in space, including during poor health after overloading, the pilot can press this button so that the plane automatically returns to straight-line movement with zero roll and pitch.
4 - Shooting button for cannon armament. Rockets are launched with a trigger.
5 - Switch "Maneuver-trajectory control" puts the aircraft in super maneuverability mode.
6 - Joystick (joystick) control marker is responsible for the position of the cursor on the screen. 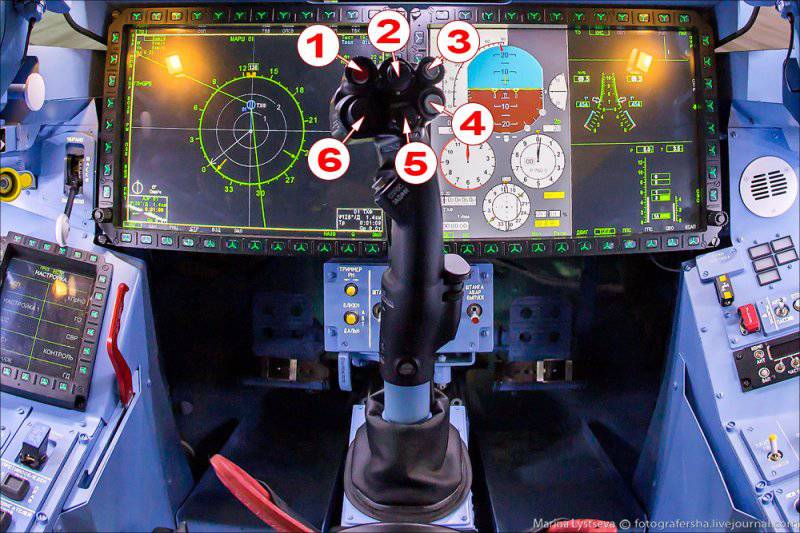 14. How is the flight? First, the instructor draws up the scenario of the exercise being performed, sets the tactical and meteorological conditions on a real map in a given area, places his / her own aliens on the ground, hangs airplanes in the air, etc. Also, the instructor can quickly enter into the task of certain failures and faults, monitoring the actions of the pilot. 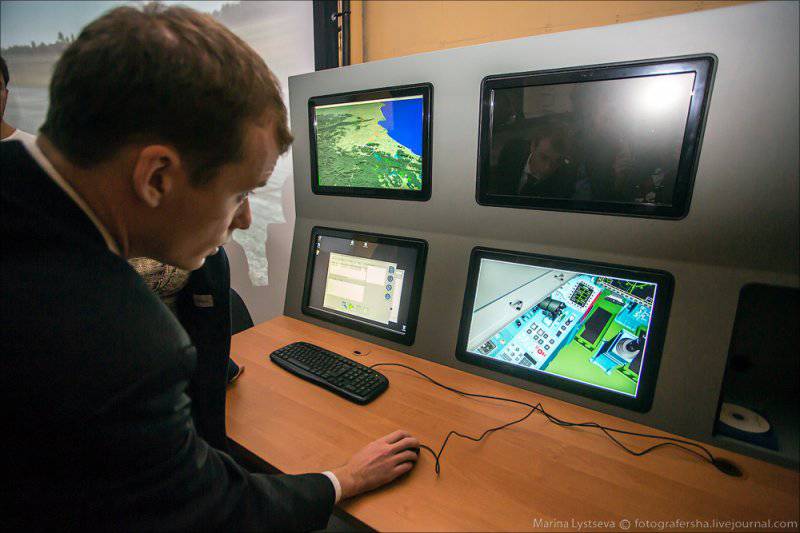 15. At RMI (instructor's workplace) several monitors. On a three-dimensional map, reference points, turning points of the route, and some targets are indicated. On another monitor, he observes the actions of the pilot, controls and flight parameters. The third is a general view of the simulator, etc. 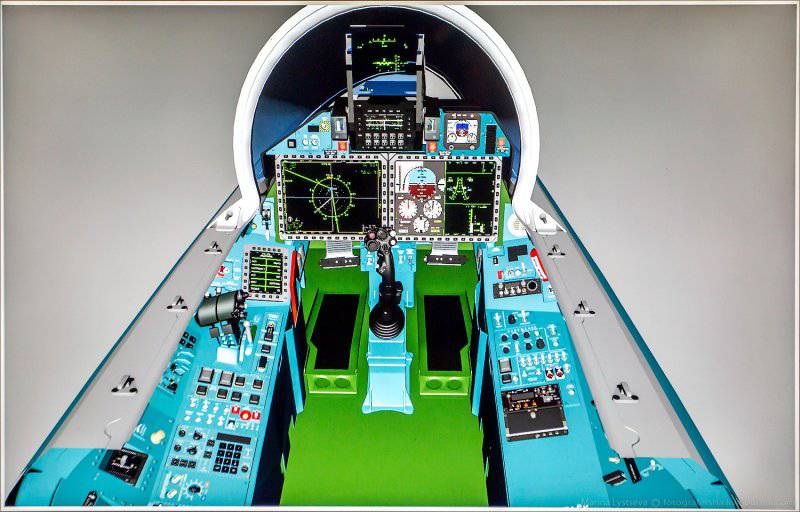 16. In the text form, the instructor is presented with express processing of the pilot's actions - which modes included, what restrictions he violated (if he violated), and what tasks he performed. All instruments and panels can be virtually brought closer. 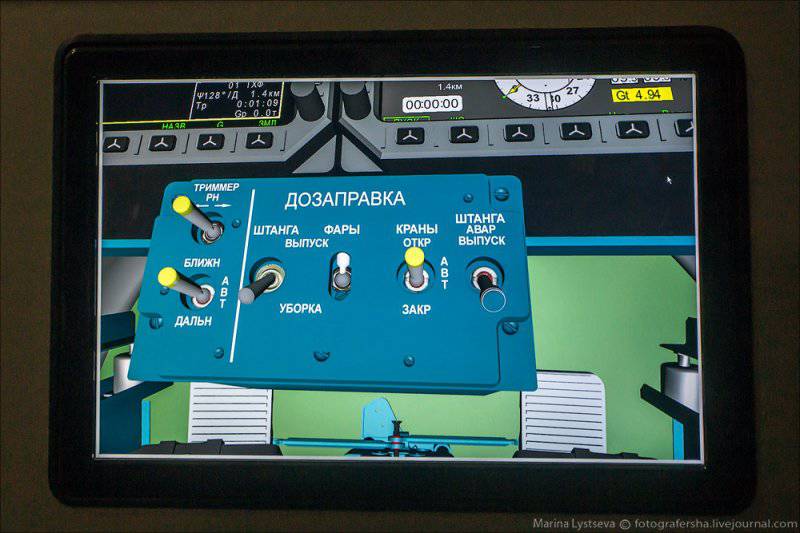 17. Then, in fact, the flight itself takes place. The student is in the cabin, and the instructor is at his workplace. After completing the job, debriefing takes place.
In the photo, Sukhoi test pilot pilot Sergey Chernyshev performs a test flight and shares his impressions with correspondents. 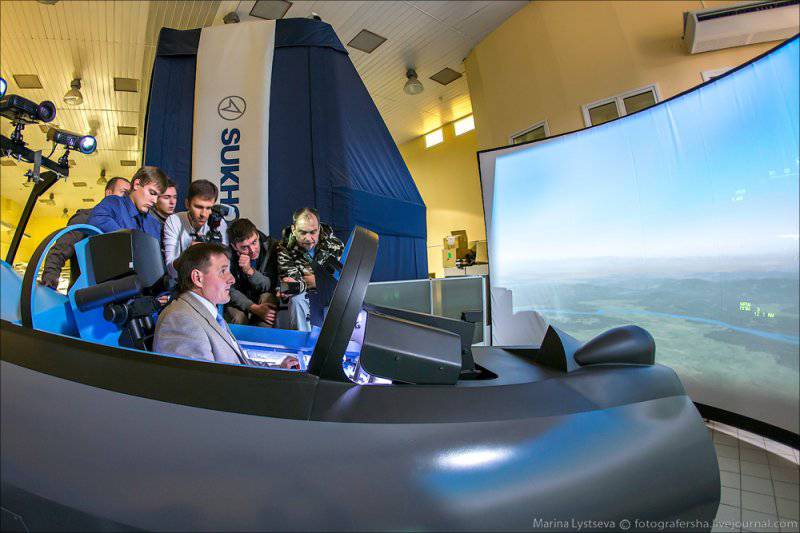 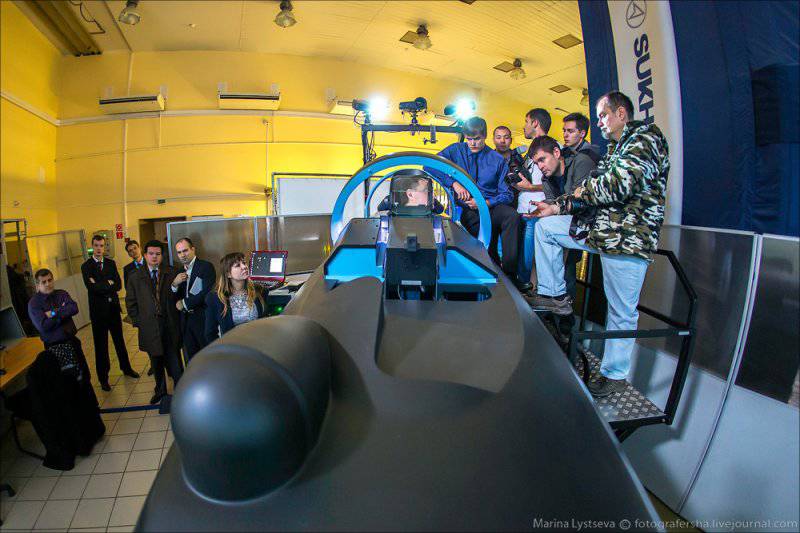 19. "The list of tasks that this aircraft should solve and is already solving is huge. It is characterized by a huge range of altitudes and speeds, an impressive range and duration of flight, a huge range of weapons that can be used at any time of day and in all weather conditions. And with all these possibilities only one person rules! " 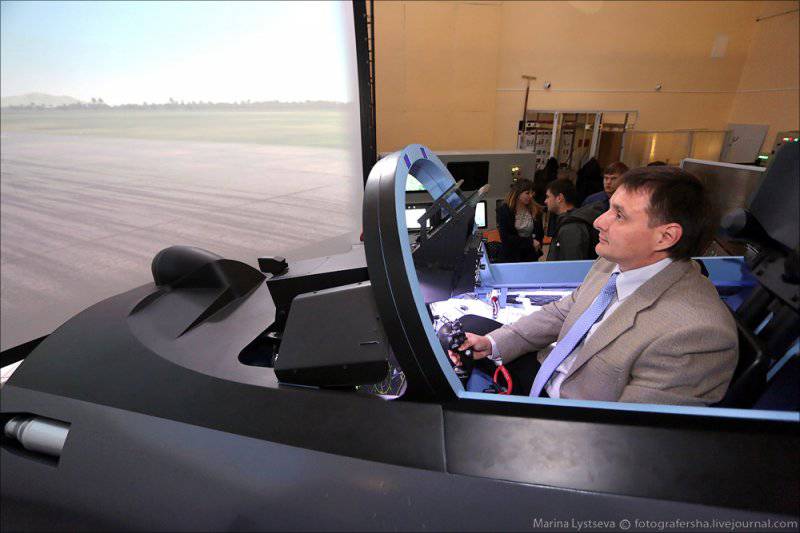 ]
20. Correspondents were also able to participate in the implementation of a simple, at first glance, task - landing. But from six or seven it was possible to do just one. I also landed, but they told me late that on the ground the plane was controlled by pedals, not a pen, and as a result I rolled onto the ground. 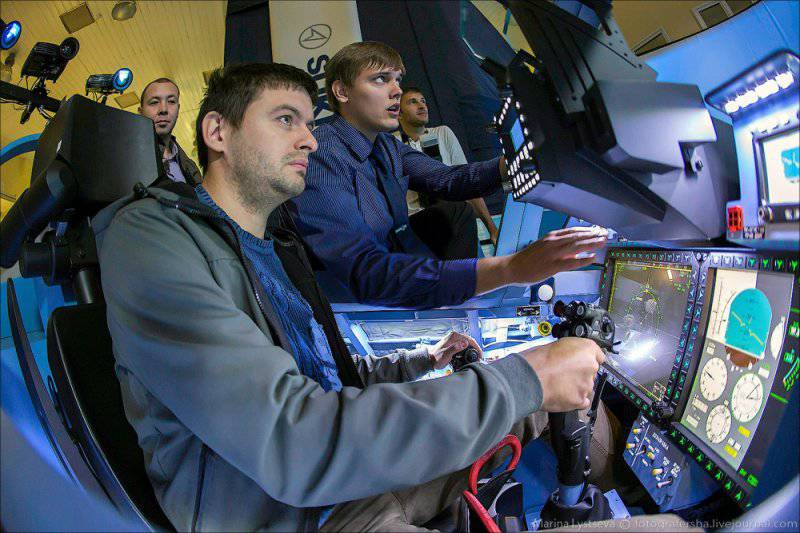 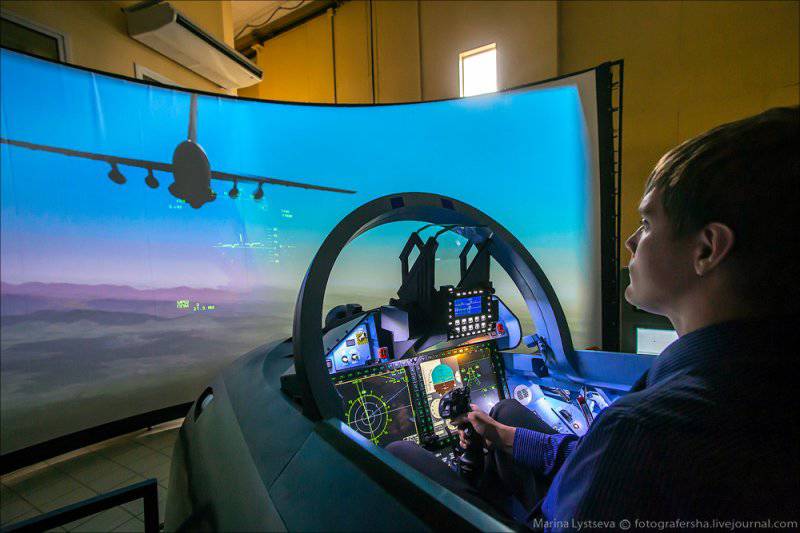 Ctrl Enter
Noticed oshЫbku Highlight text and press. Ctrl + Enter
We are
OAO Kuznetsov. Production of rocket, aviation and ground propulsion systemsThe production process of the Su-34 fighter
16 comments
Information
Dear reader, to leave comments on the publication, you must to register.