For a public penalty. Sentenced to the killer of Russian troops in the Caucasus 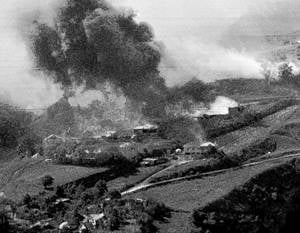 The court convicted the execution of five soldiers and an officer of the internal troops in September 1999, in the village of Tukhchar, a militant Rizvan Vagapov. He was sentenced to 18 years of a maximum security colony. The main evidence of guilt was the video made at the place of execution. Vagapov became the fifth convicted participant in the crime.


Took part in the armed rebellion in 1999, in the village of Tukhchar and the public execution of soldiers of the Ministry of Internal Affairs troops of the Russian Federation militant Rizvan Vagapov was sentenced to 18 years of a strict regime colony.

The ministry noted that in the 1999 year, Vagapov, misunderstanding ideas about the struggle for the ideas of religion, joined one of the illegal armed groups in the city of Grozny.

In the same year, a convict armed with an RPG-18 hand grenade launcher and two Kalashnikov assault rifles, including about 50 other militants, invaded the territory of Novolaksky district of Dagestan.

In the village of Tuhchar, Vagapov attacked a detachment of soldiers of the Interior Ministry troops. On the same day he took an active part in the public execution of six soldiers of the federal forces. Resisting state power structures, the militants held the captured settlement until September 8 of 1999.

“In total, in the indicated period, members of bandit groups under the leadership of Khattab and Basayev, totaling about a thousand people, captured six Dagestan settlements, in connection with which more than 37 thousand residents were forced to leave their places of residence. The normal activities of state authorities, law enforcement agencies, various institutions and public organizations were disrupted and killed, there were dead and wounded, as well as persons taken hostage.

The attackers destroyed and damaged residential buildings, social facilities and public utilities, which caused considerable damage to local residents and the economy of the republic for a total amount over 300 million rubles, ”the SC said.

Note that we mean the battle, in which the 13 soldiers of the internal troops led by Senior Lieutenant Vasily Tashkin together with several Dagestan police officers opposed a detachment of more than a hundred militants.

September 5 platoon Tashkina about three hours fought back from the many superior forces of the militants. After his infantry fighting vehicle was hit by a grenade launcher, Tashkin decided to withdraw to the connection with the roadblock of the Dagestan militia, which at that moment also fought off the gangsters. The help to the Russian military men and militiamen didn't come.

According to some reports, Tashkin decided to surrender when the cartridges were running out. The militants promised to save him and his soldiers life, but did not fulfill their promise: the thugs were cut by five military men, and the sixth was shot dead while trying to escape.

The involvement of Vagapov and other fighters in the crime was proved by video filming, which the fighters made during the execution of military personnel and which was at the disposal of law enforcement agencies in 2000 year. Vagapov was detained during a special operation conducted in 2007 in the village of Borzoy, Shatoy District, Chechnya.

Recall that the first trial against participants in the massacre of captured soldiers began in the year 2002. Then, the 32-summer resident of the village of Dacha-Borzoy of the Grozny district of Chechnya Tamerlan Khasayev was convicted by the judicial division in criminal cases of the Supreme Court of the Republic of Dagestan. He was convicted of a crime and sentenced to life imprisonment. Soon after, he died in the colony.

In 2005, the Supreme Court of Dagestan sentenced Islan Mukayev to 25 years in prison in a strict regime colony. The militant fully admitted his guilt, repented of what he had done at the trial, in connection with which the court did not impose a life sentence on him, as the state prosecutor demanded.

The third convicted for the execution of the military was the militant Arbi Dandaev. In March 2009, the court sentenced him to life imprisonment.

In January, a resident of Chechnya Mansur Razhaev was sentenced to life imprisonment on 2012. To avoid life imprisonment, Razhaev said in court that he had not killed the servicemen. However, the investigation as a proof of the guilt of the defendant presented a video made by the militants at the scene of the murder. It shows how Razhaev prepares for murder, after which he carries the body of a soldier.

In July last year, the court sentenced Alisher Bayramukov, a militant from Karachay-Cherkessia, to seven years of imprisonment for serving in an armed uprising with serving a sentence in a strict-regime correctional colony. Also, residents of the KCR Vitaly Yelkin (six years in prison), Rashid Batchaev (10 years) and Mussa Bayramukov were found guilty of the insurgency, to which compulsory medical measures were applied.

Little is known about the other participants in the armed rebellion and the massacre of military prisoners: some of them died in prisons, others died in subsequent clashes, and others continue to hide from the investigation abroad.

Ctrl Enter
Noticed oshЫbku Highlight text and press. Ctrl + Enter
We are
Results of anti-terrorist work on Dagestan in April 2014
189 comments
Information
Dear reader, to leave comments on the publication, you must to register.