November 13 2013
64
The domestic corporation Zashchita has completed work on the creation of its new armored car under the designation SBA-60К2 “Bulat”, which has the wheel formula 6х6. CJSC "Corporation" Protection ", founded in 1993 year, today occupies one of the leading places in Russia in the market of manufacturers of armored and special vehicles. The activity of the corporation is aimed at the production and development of armored vehicles and special equipment, both civil and military, on the basis of foreign and domestic vehicles of various modifications intended for the transportation of employees of special units, valuable cargo and VIP-persons.

Special armored car SBA-60-К2 is designed to transport personnel on roads of absolutely all categories and in different climatic conditions and ensure its protection. The car has a high class of body armor - 6 class according to GOST R 50963-96. The machine provides the crew and the assault force with reliable protection against blasting under the bottom of the non-winged improvised explosive devices weighing up to 1 kilograms in TNT equivalent, as well as the explosion of the F-1 fragmentation grenade on the roof of the vehicle. Additionally, inside the cabin can be installed anti-ricochet and anti-shatter protection. In general, the Bulat armored car is significantly higher than the BTR-80 in the existing level of anti-bullet and splinter protection. 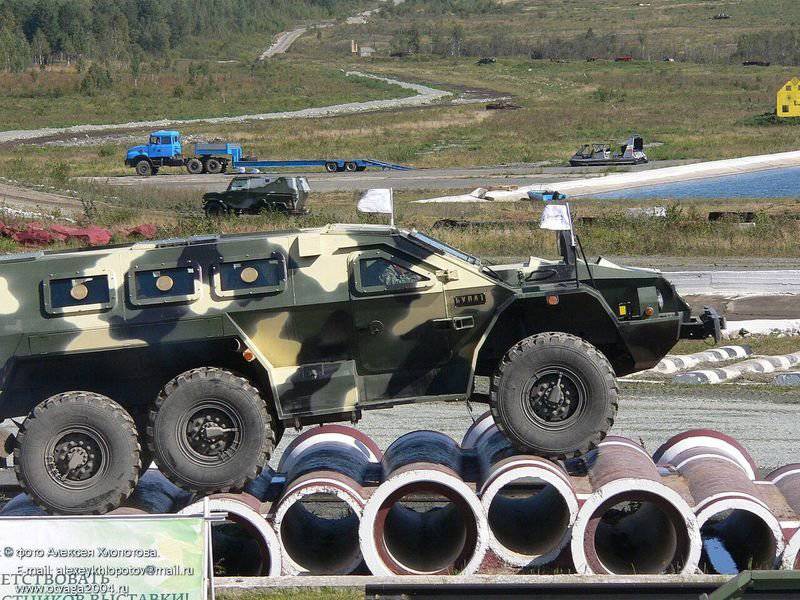 The Bulat armored car was created on the basis of KAMAZ-5350 units and 6x6 wheel assemblies. In front of the body of the armored car are 2-e side hinged doors (commander and driver), in the stern of the hull - another 2-e hinged doors, the roof has 6 hatches. On both sides of the hull special multi-layered bulletproof glass, equipped with built-in loopholes, are placed. The windshield of the car has electric heating. The capacity of the machine is 10 people (2 + 8). The landing chairs are made suspended, they are equipped with built-in shock-absorbing devices, which makes it possible to reduce the load on a person in case of an explosion of an armored car on a mine.

The landing party can conduct firing from individual weapons, using for this purpose both special loopholes (embrasures) of the open type in the side windows and stern doors, and through folding top hatches. In the open position, the opened covers of the upper hatches can additionally play the role of armor casters.

To ensure the crew of armored vehicles comfortable conditions, it is equipped with air conditioning, ventilation and heating systems. If necessary, the “Bulat” can be installed filtering unit. For transportation of firearms of personnel inside the case there are special attachments. The inner surface of the body armored trimmed non-woven material. In order to provide the driver of the armored car with the best view back, you can install a rearview camera with a separate monitor on the car. In the bow of the SBA-60-К2 winch is installed, which has a pulling force in 7 t. 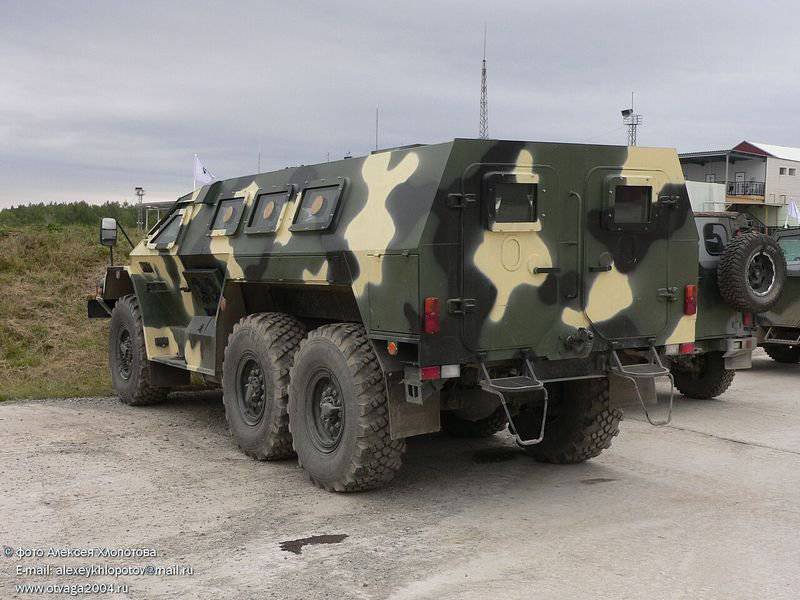 The layout of the armored car "Bulat" is similar to the standard layout of a truck with an armored engine compartment, which is located in front. Behind him are the driver and commander of the car, then the troop compartment. The troop compartment has a slightly elevated roof level in order to provide greater internal volume and to allow mounting a steerable module with weapons, such as an 7,62-mm machine gun with a large frontal firing sector, mounted on the roof.

In the front suspension of an armored car, ordinary springs are applied, and the rear one is installed on 2's semi-elliptical springs. At present, the manufacturer offers 2 turbocharged V8 diesel engines to the role of the main power plant: Euro-3 standard, 165 kW power (240 hp) and Euro-4 power 206 kW (280 hp). Both engines work with a manual gearbox. At the same time, Zashchita Corporation declares that a much more powerful 400 hp diesel engine can be installed on the car, and the manual transmission can be replaced with automatic transmission. At the moment, Bulat is able to develop speed up to 90 km / h on the highway, which, together with the 420 liter fuel reserve (in 2 tanks), provides the car with an impressive power reserve - 800 km. 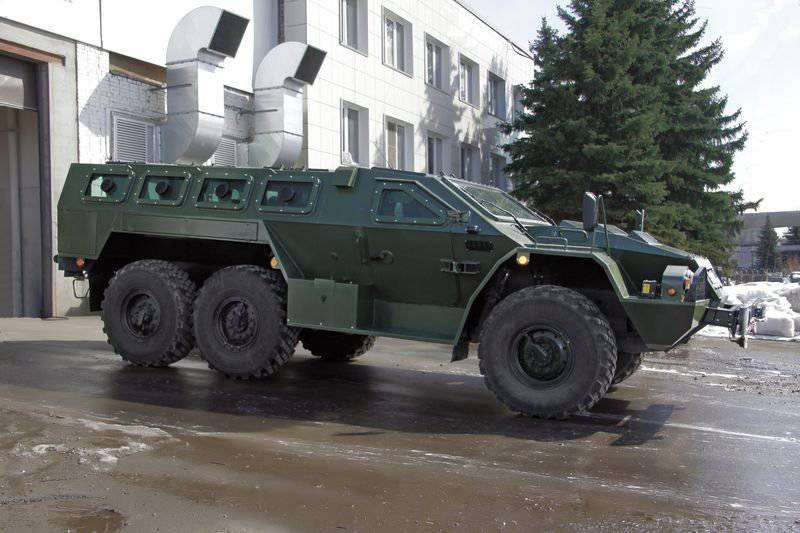 Both the driver and the vehicle commander have their own side doors that open forward. For an exit of a landing there are used 2-e doors in aft of the body Now these two doors open manually, but if necessary, the manufacturer can provide them with a hydraulic drive controlled from the crew or driver compartment. The survivability of the crew and the landing is increased due to special folding seats with mine protection. There are a total of 4 seats on each side of the troop compartment, which are facing each other. The SBA-60-K2 “Bulat” armored car on display in Nizhny Tagil was equipped with a central tire inflation system and a front electric winch.

6 hatches are located on the roof of the vehicle, but their number can be reduced, for example, to be placed on the roof of the combat module. It is possible to use weapons with remote control or the installation of various options for turrets. Depending on the level of protection installed, the total weight of the machine is at the level of 15,9 or 19,5 tons. Standard equipment of an armored car consists of a fire extinguishing system located in the engine compartment, an air conditioner, special racks for machine guns and other personal weapons of soldiers. At the same time, there is the option of installing on “Bulat” various additional systems: circular view cameras, satellite navigation systems or additional heating.

Currently built copies of the SBA-60K2 are protected vehicles for transporting personnel of combat units, however, the developers have foreseen the option of installing various weapons on the Bulat, for example, PBU-1 turret (similar to the one that is mounted on the BTR-80 ), missile or remote-controlled machine-gun installation. That is, there is a real possibility of transforming a transport armored car into a unified "specialized chassis." The Bulat armored car can become a base for an armored sanitary-evacuation or medical vehicle (the size of the troop compartment and the location of the doors contribute to this), the mobile control point. And although such vehicles are not able to completely replace armored personnel carriers, they are ideally suited for carrying out transport and special tasks as part of various counter-terrorist operations.