November 13 2013
9
The Yak-32 (according to the NATO codification Mantis (Mantis)) is a Soviet training jet aircraft. There was also a two-seat version of this machine, which had the Yak-30 index. The Yak-32 was perfectly adapted to perform complex aerobatics, it could carry them out with time-consuming overloads. The Yak-32 weighed 300 kilograms less than its two-seater counterpart and had better flight data. The Yak-32 was the world's first training and sport aircraft, which was equipped with an ejection seat. However, in serial production of the aircraft was not launched, just 3 was collected copies of the aircraft.


Even now, looking at the photographs, we can say that the Yak-32 was a very beautiful car. Thanks to the activities of lovers aviation, currently there is a flying copy of this aircraft, which still pleases the audience at various aviation holidays.

1950-e years can be characterized by the beginning of a broad expansion of jet machines, the speed of which exceeded the speed of sound. Such machines required modern, reliable turbojet engines with high power, as well as small dimensions and weight. This was dictated by the need to reduce the material costs of production, and at the same time opened up to aircraft designers ample opportunities for designing aircraft. Such engines were also needed to create light sport training and training jet aircraft that could be used in DOSAAF clubs and flight schools of the Air Force for training military pilots. 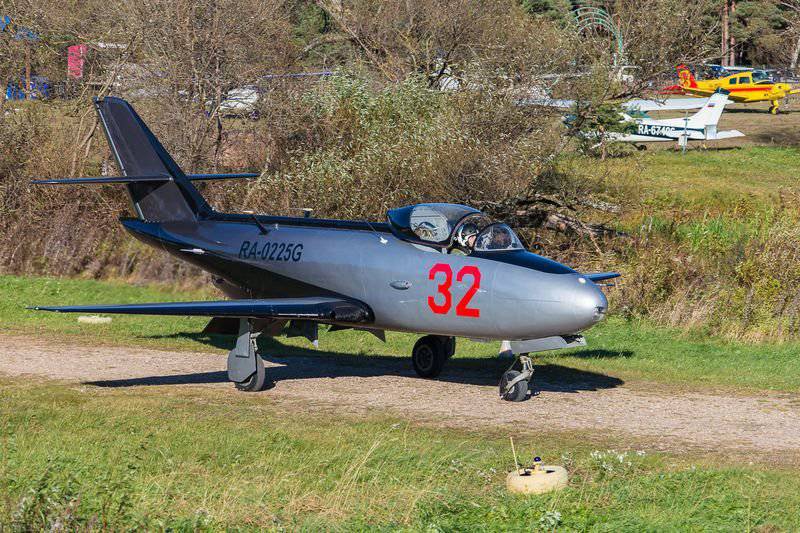 By the end of 1950-s, such engines appeared in sufficient numbers, and already in 1959, a competition was announced for the creation of a jet training aircraft. Participation in the competition took design teams from the USSR, Czechoslovakia and Poland. Especially for the competition in the Design Bureau. Yakovlev was developed training Yak-30 two-seater jet aircraft, which received the RU-19 engines designed by S. K. Tumansky. The engine weighed 228 kg and provided traction at the level of 900 kgf. Compared with the RD-10 engine with the same level of thrust, it weighed immediately in 3,5 times less, was more than 2 times less in linear dimensions, and also consumed less in fuel 2 times.

Together with the Soviet Yak-30, the Polish aircraft TS-11 “Iskra” and the Czechoslovak L-29 “Dolphin” took part in the competition. All 3 cars had very good flight performance, but the Yak-30 was recognized as the best. With other similar data from competitors, he weighed a whole ton less. However, ultimately, it was nevertheless decided to accept the Czechoslovak aircraft for serial production, since it was planned to build it in Czechoslovakia at the enterprises most suitable for this.

Already in 1961, on the basis of the Yak-30 two-seater training aircraft, a single aerobatic flight version of the aircraft was designed under the designation Yak-32. The new aircraft was even easier. This was achieved by removing the second cockpit. Reducing the weight of the machine has a positive effect on its maneuverability. Perfectly adapted for turned flights, the aerobatic Yak-32 could easily perform the most complex aerobatics even with long-term negative overloads. 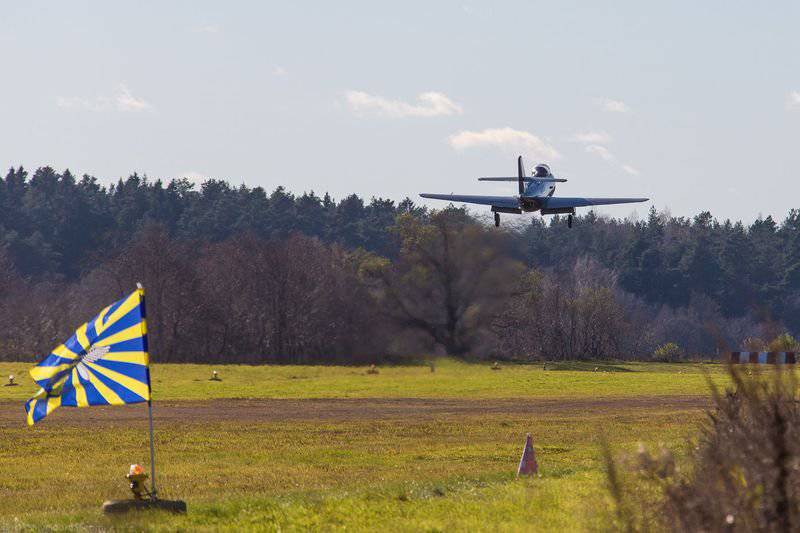 The design of the Yak-32 was similar to the design of the predecessor aircraft. Yak-32 was a monoplane, made entirely of metal, with a low wing, which was made detachable with a center section. The plane received a light ejection pilot's seat and was equipped with the minimum necessary set of radio engineering and aviation equipment. The machine has successfully passed a series of tests. One of the important qualities of the Yak-32 was the ability to use the aircraft even from unpaved airfields.

4 February 1959 of the year saw the issuance of a decree on the construction of a sports single-seater aircraft, which received the Yak-104PS cipher (in the future Yak-32), it was planned to equip the aircraft with an RU-19-300 engine. Already 13 of October 1960 of the year, ahead of the design deadlines for the 4,5 of the month, the Yakovlev Design Bureau assembled the first single-seater sports plane, which was designed to work out the techniques of performing flights en route, in a circle, and training in adverse weather conditions at night and in the afternoon. Also on the plane was planned to work out the technique of performing various figures of aerobatics. From the Yak-30, the aircraft was notable for the lack of a rear cockpit, an increase in fuel supply for 45 liters for longer piloting and a power plant, which was adapted to make an inverted flight. Total was built 3 Yak-32.

From 17 January to 27 July 1961, the 2 of the Yak-32 aircraft underwent a series of tests in the aerobatic (60 board) and training (32 board) versions. Flight version of the aircraft was facilitated by another 555 kg. This was achieved by reducing the stock of fuel and the mass of the empty aircraft. On the flight version of the Yak-32 there were no flaps and the area of ​​aileron was increased. 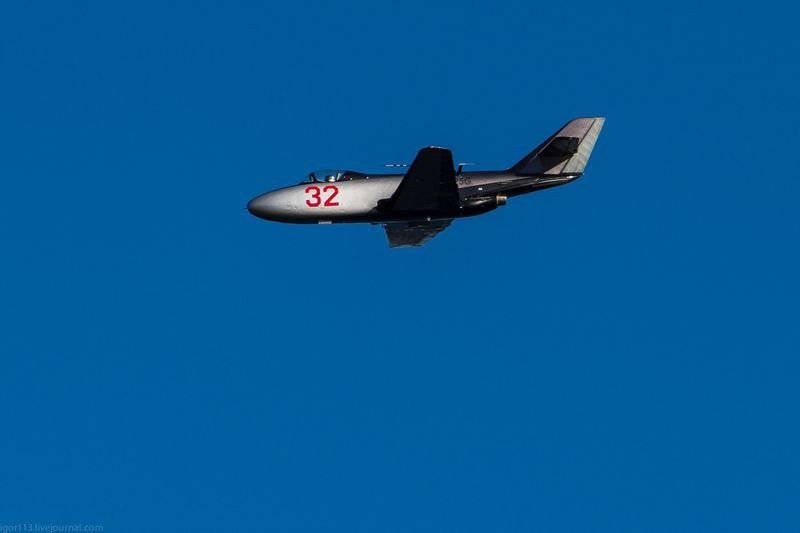 The joint tests of the aircraft were carried out by the leading test pilot V. P. Smirnov and the test pilots A. P. Bogorodsky, V. G. Mukhin and Yu. V. Petrov. A total of 49 flights were performed on the machines, and the total flight time was 23 hours 22 minutes. In addition, in preparation for the air holiday in Tushino and during the holiday, from 8 June to 9 July 1961, test pilots performed another 55 flights on the Yak-32 (the total flight time was 23 hours 14 minutes).

According to the pilots, the plane turned out to be pleasant and easy to fly, quite stable in terms of overload and speed, it had excellent visibility and a spacious cabin. At the same time, the review was equally good both in the air and on the taxiing. On the Yak-32 pilot could perform all the complex figures, both direct and reverse aerobatics, as well as rather complex multi-figured complexes. At an altitude of 3000 meters the pilots managed to get the maximum speed in 663 km / h. During the compression of the Yak-32 (acceleration of the aircraft in the canopy dive), the instrument speed of 765 km / h was achieved at an altitude of 2200 meters. The general conclusion on the results of the tests stated that the Yak-32 can be recommended as a standard machine for equipping DOSAAF aeroclubs. However, the state tests of the aircraft, which were scheduled for the second part of 1961, almost did not take place.

In 1961, at the Central Aerodrome, A. S. Yakovlev demonstrated to the Minister of Defense of the country R. Ya. Malinovsky the possibility of using the Yak-32 aircraft as a light attack aircraft. This project received the code - Yak-32Sh. On the plane were installed 2 underwing holder weapons. The aircraft was demonstrated on the ground, with various versions of mounted armaments laid out in front of it. According to the calculations that were made by 25 May 1961, the Yak-32Ш planned to increase the engine thrust to the value of 1100 kgf, the fuel stock should have been 726 kg. The take-off weight of the aircraft increased to 2900 or 2580 kg. depending on the weapons installed on the attack aircraft (716 or 300 kg, respectively). The maximum speed of the car was to be 685 km / h at an altitude of 5 thousands of meters. The aircraft could have the following weapons: artillery 2 cannon AO-9 (2150 tanks), AB-250 aerial bombs (2X275 kg), various types of missiles (from 2XXNNXX kg to 116XXNNUMX kg, and incendiary cups). ). This version is also not serially produced. 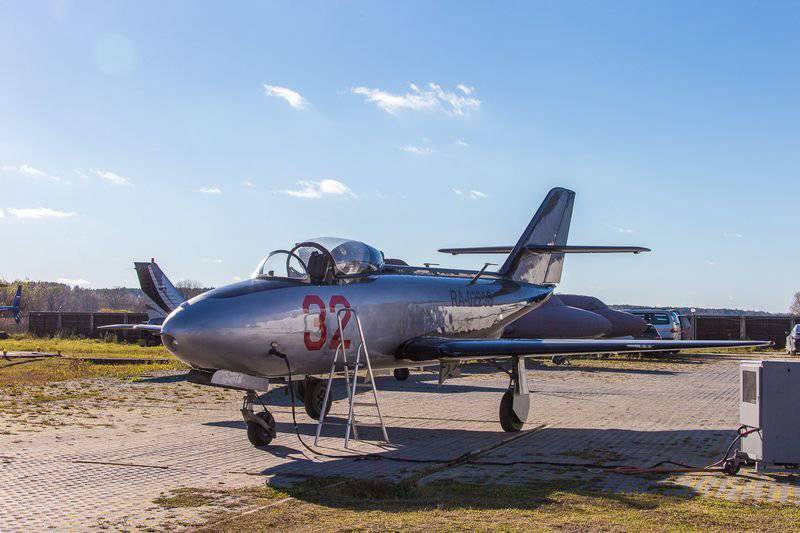 Another version of the aircraft received the designation Yak-32P. One of the Yak-32 aircraft in the 1971 year was restored in aerobatic flight. This machine received an experienced TRD RU19P-300 with 900 kgf. At the same time in the engine to ensure a longer duration of the inverted flight changed the oil system. From the original version of the Yak-32, the new aircraft was distinguished by the presence of a sealed cockpit, the GMK-1 gyromagnetic compass, the ARK-15 radio compass and the Landysh-5 radio station. In this case, the set of equipment was made removable. It was planned to use it during ferry flights, as well as en-route flights in difficult meteorological conditions. This machine, despite the positive feedback received during the tests, also did not go into the series.

Ctrl Enter
Noticed oshЫbku Highlight text and press. Ctrl + Enter
We are
Chinese fighter-bomber JH-7 "Flying Leopard"An-12 in Afghanistan
9 comments
Information
Dear reader, to leave comments on the publication, you must to register.