Climatic weapons: technology of the distant future or a reason to worry now? 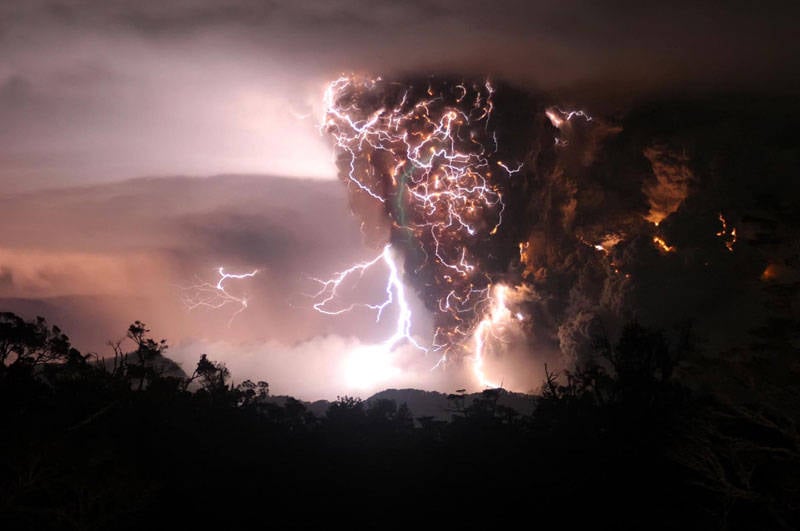 With frightening regularity in different parts of the planet occur natural disasters. Floods, hurricanes and fires claim dozens of lives and cause multimillion-dollar damage. Like any other phenomenon that a person cannot fight with, natural disasters become the reason for the emergence of various conspiracy. Almost every major disaster receives an explanation stating the direct involvement of a person. T.N. climatic weapon, able to influence natural processes, has long been a universal explanation for any natural disaster.

The recent flood in the Far East has become another event that received such an explanation. Instead of a serious analysis of the prerequisites for raising the level of rivers, some individuals expressed a simpler version, namely the use of a certain hypothetical weapon system. This system at the command of the operator had some influence on the climatic processes in the nature of the Far East, resulting in flooding. For obvious reasons, the United States has become the main “suspect in organizing” the floods. There is still mistrust in this state in our country, which contributes to the emergence and spread of such accusations.

An interesting fact is that the suspicions of the use of climate weapons concern not only past disasters, but also possible ones in the future. Less than 100 days are left before the Olympics in Sochi, and versions of a possible act of aggression using climate control systems are already emerging. For example, in mid-October, the publication Arguments of the Week published an interview with two military weather forecasters (“When Climate Weapons Shoot”). One of the interlocutors of the publication expressed concern that US intelligence agencies might attempt to disrupt the competition in Sochi, using natural processes.

Since the late nineties, the version that the United States already has climate weapons has become widespread. As a similar system, Americans can use the HAARP complex (High Frequency Active Auroral Research Program - “Program for the study of high-frequency effects on the ionosphere”), located in Alaska. The complex includes transmitters and antennas, research equipment and a system for processing the received data. According to official information, HAARP is used to study the ionosphere in the interests of fundamental science and in the framework of programs for creating advanced communication systems.

Despite the existing official data, the HAARP complex, even before its work began, was the reason for the emergence of several conspiracy theories. Conspiracy theorists believe that HAARP is intended to suppress radio-electronic systems in a given area; to influence atmospheric processes or even to provoke earthquakes. For obvious reasons, none of these versions has a decent evidence base, which is why such theories remain marginal and are common only in limited circles. As proof of theories about the use of HAARP for aggressive purposes, several facts are used. First of all, supporters of conspiracy theories recall that the complex was built with the active assistance of the Pentagon. In addition, much of the information about his work and research results is closed to foreign scientists and the general public. There is every reason to believe that the HAARP project was supposed to be used in military studies from the very beginning. According to the available data, in the course of these works, certain issues related to long-range radio communications and the detection of ballistic missiles were studied.

Moreover, the elementary knowledge of the physics of natural processes makes it possible to dismiss conspiracy theories as untenable. According to various sources, the total radiation power of the HAARP complex antennas does not exceed 3600-4000 kW. As follows from published research reports, the complex simply cannot have a serious and lasting effect on the Earth’s ionosphere. All disturbances in the ionosphere, resembling the northern lights, stop for a few seconds or minutes after the radiators stop working. In addition, the HAARP complex can cause changes in the ionosphere only in a small area located above the antenna field. Finally, it is necessary to take into account the fact that the ionosphere of the planet is constantly exposed to the outside, the strength of which far exceeds the maximum capabilities of the HAARP system.

This year there were several events that reminded of the HAARP complex and, as a result, of various conspiracy theories. In May, it became known that the existing contract for research using the complex had expired. For this reason, indefinitely, HAARP is shutting down. A little later, a message appeared that by the end of the year the complex would be used again for research. This time the work will be commissioned by the Agency for Advanced Defense Research and Development (DARPA). Specific research objectives have not yet been named. The HAARP complex already has a specific reputation in certain circles, and DARPA’s interest in it has caused new rumors to appear.

It is worth noting that the HAARP complex is not the only system for studying the ionosphere, accused of working as a climate weapon. Similar theories are common in Western countries that mention the Russian Sura complex. Located in the Nizhny Novgorod region, the complex according to official information has the same objectives as HAARP. The differences between the two systems are in the architecture, the applied elements, etc. However, Sura can also create disturbances in the ionosphere, similar to the northern lights. For obvious reasons, theories about the use of the Sura complex as a climate weapon are common abroad and are almost unknown in our country. In addition, similar theories (although much less well-known) exist around all stations designed to study the ionosphere.

The existing development of technologies does not allow humanity to exert a lasting and noticeable impact on natural processes, but climate weapons are one of the most interesting and promising projects of the future. In the future, such systems will allow stopping or, at a minimum, significantly hampering the work of the enemy’s industry, agriculture and communications. As practice shows, natural disasters are one of the most destructive phenomena on the planet. Understanding the power of advanced climate weapons using natural phenomena, several countries at the end of the seventies signed the Convention on the prohibition of military or any other hostile use of means of influence on the natural environment.

The term “climatic weapon” is now in most cases understood as a certain hypothetical system capable of bringing a powerful hurricane into the enemy’s territory or launching a major flood. However, a few decades ago, the United States already used a different kind of climate weapon. From the spring of 1967 to the summer of 1972, Popeye was carried out as part of the Vietnam War (sometimes called Spinach). During this operation, American military transport and attack aircraft during the rainy season sprayed silver iodide over the clouds. This compound causes the formation of hot spots of condensation and, as a result, rain. Currently, no more than 45-50 tons of this substance are used throughout the world in a year, and during Operation Popeye over five years, the USAF sprayed around 5,4 thousand tons over Vietnam. The result of this seeding of the clouds was the numerous heavy rains that disrupted the work of the Ho Chi Minh Trail and flooded agricultural areas. Initially spraying silver iodide was experimental. The experiment was recognized successful and the use of the technique continued. 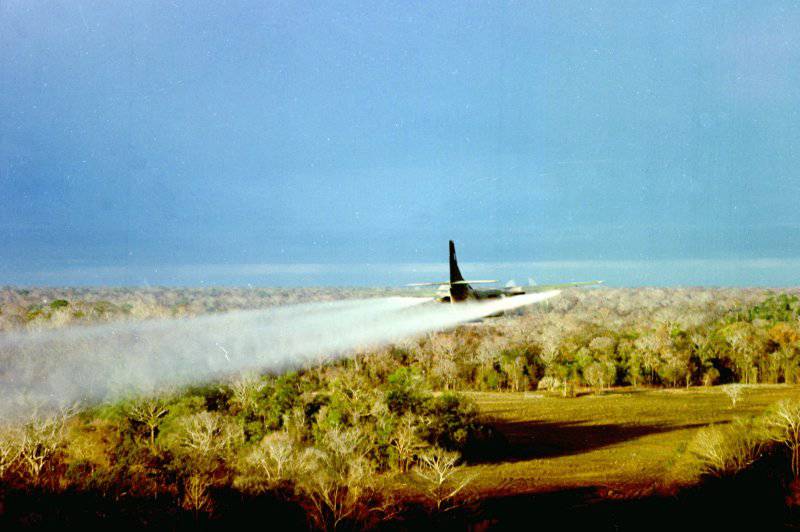 In the eighties, the United States, as well as the USSR, together with Cuba, studied tropical typhoons, wanting to find a way to influence their strength or trajectory. Both projects helped to gather a lot of important information, but the development of typhoon impact agents was discontinued due to their excessive complexity. The study of various atmospheric phenomena is still ongoing. However, by now only methods of influencing rain clouds are widely mastered. Other atmospheric processes, and especially natural disasters, are still beyond the control of man.

The main reason that climate weapons, using the force of hurricanes, floods, etc., has not yet been created, lies in the energy component of all these natural disasters. If the effect on the rain cloud is enough to spray the necessary substance over it, then working with other natural phenomena requires much more complex techniques. As an example, the operation "Pope" / "Spinach". Spraying silver iodide over Vietnam did produce the expected result, but such an impact on the weather in large areas for five years turned out to be too expensive. US aircraft had to make several thousand sorties. Often, there are doubts about the feasibility of such flights, since material resources could be spent with greater benefit by operating planes for their intended purpose.

The effect on climate by heating up certain parts of the atmosphere is even more complex and expensive. Having knowledge of physics at the secondary school level, it is easy to calculate how much energy is needed to warm one cubic kilometer of air by at least one degree. From this calculation, we can draw the appropriate conclusions about the possibility of tangible climate change in a particular area. Finally, we should not forget that to use such methods of influencing the climate for sabotage purposes it will be necessary to ensure the transfer of energy of the atmosphere imperceptible to the enemy. In general, a full-scale operation of this nature is not yet capable of even the whole of humanity, acting together.

However, climate weapons, capable of destroying entire regions without existing, continue to haunt minds. It makes people invent controversial theories about scientific experiments and look for evidence that they are right. The causes of such phenomena are probably worth looking for in human psychology. Mankind has always suffered from natural disasters and natural disasters, but even now, with a wealth of knowledge and technology, it cannot fully protect itself from them. Perhaps because of this, people are trying to find an explanation for the frightening phenomena, often reaching the fabrications of conspiracy. In addition, we should not forget the fact that the technologies of artificially provoking rains are already widely mastered. Operation "Popeye" and seeding clouds with reagents before mass events can even more embarrass people who fear disasters.

It should be noted that the creation of systems to control the climate in large areas is guaranteed to find peaceful application and help solve a lot of problems. For example, an artificially created large cyclone can be used to extinguish forest fires over a large area, and by manipulating small cyclones and anticyclones, a person will be able to protect crops from drought. However, such technologies are unlikely to appear in the next few decades. According to various forecasts, mankind will be able to master such technologies not earlier than the middle of the XXI century. By this time, the question of the military application of such technologies will become topical. Therefore, the current concern about climate weapons can be considered untimely, but we should not forget about possible risks either.

Ctrl Enter
Noticed oshЫbku Highlight text and press. Ctrl + Enter
We are
Weapons of a very distant future. Part of 1. Gauss Cannon and RailgunWeapon 2100 of the year?
19 comments
Information
Dear reader, to leave comments on the publication, you must to register.