November 13 2013
96
The unexpected and short-term visit of the President of Ukraine Viktor Yanukovich to Moscow - to the Russian leader Vladimir Putin - made a lot of noise. The situation was first stirred up by the Ukrainian media, which initially announced that the head of Ukraine had flown to Moscow, and then some Russian media outlets, having published information about the “shortness” of Yanukovych to the Russian capital. For some time, the question of where Viktor Yanukovych is at the moment was hanging in the air, since he seemed to have flown out of Kiev, but did not appear in Moscow.


The situation was somewhat defused by the head of the Kremlin press service, Dmitry Peskov. He said that Yanukovych last Saturday really met with Vladimir Putin, and at the meeting the heads of state discussed with each other issues of trade and economic cooperation.

Discussion of just such questions at the meeting of the Russian and Ukrainian president in the light of current events looked more than predictable. Recall that in two weeks the EU summit on the so-called Eastern Partnership starts in Vilnius, and it is expected that at this summit the number of countries that have signed an association agreement and entering a free trade zone with the EU will increase at the expense of Ukraine.

We have repeatedly discussed the issues of what will happen to the economies of the Russian Federation and Ukraine after the latter signs the mentioned agreement and goes under the “warm wing” of Brussels. Now it is worth discussing the somewhat strange visit of Viktor Yanukovich to Moscow. This visit is also called strange in Ukraine itself, and not only outright opponents of Viktor Yanukovich, but even his colleagues in the “Party of Regions” are called. Strange - because Viktor Fedorovich, as it turns out, before leaving for a conversation with Vladimir Putin, he did not warn any of the parliamentarians who belong to the Party of Regions faction. And, accordingly, he did not explain to his party members what ideas he was going to discuss in Moscow literally on the eve of the Vilnius summit. 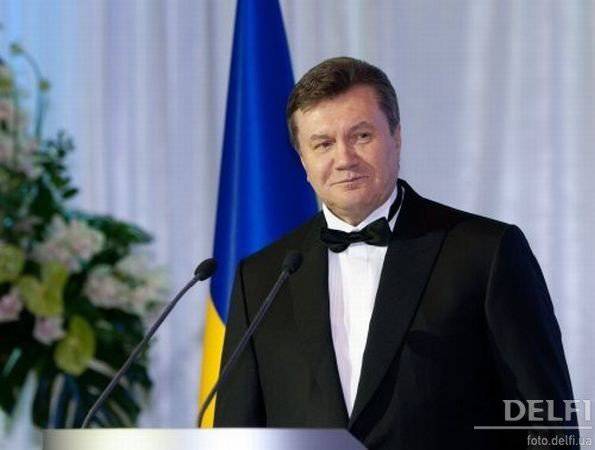 The fact that Yanukovych went to Moscow without consulting with his supporters in the Ukrainian government, said the deputy from the "Party of Regions" Elena Bondarenko. On the Ukrainian TV channel ICTV, they asked her if she was aware of why the president went to Moscow, and what did the president talk about at the meeting? The legislator replied that she was not aware of the purpose of this visit, and about the awareness of other “regionals” on this issue, she said, quote:

If they knew, probably, someone would have already shared with the media.

At the same time, Elena Bondarenko put forward her own version of why the negotiations between Yanukovich and Putin were conducted in a mode of heightened secrecy. In her opinion, the whole thing is in the latest scandals that have emerged with wiretapping of the talks of the leaders of various states:

In the light of the constantly emerging scandals a la Snowden, a la Assange, I think these are precisely the security measures that the politicians of the two countries are taking to ensure that they are not spied on. Everyone heard about the scandal with Merkel wiretapping, right? Enough is not enough. I think that those politicians who are concerned about the protection of their interests, about the protection of the negotiation process, are forced to do just that.

So, the version of such a misty visit of Yanukovich to Moscow was put forward in the “Party of Regions” - they say, to ensure the secrecy of the negotiation process from the interception of the same CIA, NSA or other similar services.

However, Ukrainians and Russians are not so much worried about why everything is so vague as about what exactly the leaders of the states said to each other at this quick meeting. Building some versions on this issue is, of course, a thankless task, but still ...

It is worth recalling that the meeting between Yanukovich and Putin took place on November 9 (so says Russian presidential spokesman Dmitry Peskov), and exactly one day before Ukraine announced that it was refusing to buy Russian gas. Information came from Kiev, which emphasized contracts with RWE (Germany), which in transit through Poland will pump gas to Ukraine. In addition, Russia was reminded that Ukraine had more than six months selling gas through Hungarian territory to European partners and that Ukraine would soon have plenty of gas — from mining to shale gas, which would help Western investors, for example, Shell.

Information about the refusal of the services of "Gazprom" announced on Friday, Yanukovych the next day flies to Moscow. Coincidence? If a coincidence, then unique. Rather, it is not a coincidence, but the alignment of a logical chain. The link of this chain - the visit of the President of Ukraine to Moscow - is presented as one of the latest options for bargaining for Yanukovich. In other words, Yanukovych, as it were, demonstrates to Putin that Ukraine can completely do without Russian expensive gas, and that such independence from Gazprom will only increase over time due to “care” from Western “partners.” Can Russia ignore such a demarche of Ukraine in the present conditions? Theoretically, yes, in practice, it is difficult to do, because losing consumers to “our national wealth” is not from the hand ...

In such a situation, it is quite possible to expect the long-awaited reduction of prices for Russian gas for Ukraine by Yanukovych. A reasonable price for Kiev would be at the level of 270-280 dollars per thousand cubic meters - two times lower than the current price. Ukrainian officials have already spoken about this more than once. Even at the very end of last year, Gazprom itself predicted a decline in prices for Ukraine not to 270 dollars, of course, but to 350-360 - for sure. Large-scale decline, as we understand, did not happen. Now the Ukrainian president could use this as a kind of trump card: they say, we demonstrate that we are completely painlessly moving away from economic dependence on Russia, but Russia's dependence on Ukraine continues to show itself (well, for example, the Russian Black Sea Fleet in Crimea). And if such a trump card was actually presented to Yanukovych, then the pricing policy with regard to Russian gas may change in the direction of reducing the cost of a thousand cubic meters of “blue fuel”.

However, a trump card with possible statements about the painlessness of refusing Ukraine’s close economic contacts with Russia is in fact dubious. This is confirmed by a letter addressed to Viktor Yanukovych by the Federation of the Trade Union of Ukraine and the Union of Ukrainian Industrialists and Entrepreneurs. In this letter (the letter Yanukovych received the other day), the president of Ukraine tried to convey information about the deafening rates of decline in the level of Ukrainian production, which is connected, according to representatives of the FPU and USPP, with the deterioration of relations between Kiev and Moscow.
Industrialists of Ukraine estimated that the decline in production in the engineering industry over the past months of this year amounted to more than 13,5%, and the chemical industry - almost 20%! That is, Ukraine can be abandoned both from Russian gas and from the Russian market, but only how will this affect the economy? ..

So far, to the letter of the FPU and the UUIE, Yanukovych has been deaf, which causes outright bewilderment even among his party members. The “regionals” deputies are also dissatisfied with the fact that Yanukovych is playing some kind of his own game, frankly ignoring the interests of people who at one time gave a vote for Yanukovych in the elections. One of the critics of the President of Ukraine today is even the head of the Party of Regions faction in the Verkhovna Rada, Alexander Efremov. The deputy expresses dissatisfaction with the fact that Yanukovych is putting pressure on the faction, calling for supporting unpopular decisions - decisions on association and an FTA with the EU.

This is what Viktor Yanukovych’s fellow party member states on this matter:

Already problems began in the faction. In the "Party of Regions" there are many industrialists from the east and south. A person comes to the region - his enterprise is closed, jobs are lost, the border is closed. And on the ground, people ask logical questions: what do you accept in parliament? He returns to the faction and says: why should I vote for everything? We have 77% of engineering products supplied to Russia.

We are not such a faction - what they said there is what we are doing. We are not robots. We have all the issues discussed and discussed.

Apparently, this time Viktor Yanukovych does not intend to discuss and discuss his decisions. And the best way to explain your "top-secret" fortels is to announce your desire to protect yourself from overhearing by foreign intelligence agencies ...

In general, it is unlikely that Yanukovych now refuses to join the FTA with the European Union. The only option is more than solid "concessions" from Moscow, which, obviously, Viktor Fedorovich was counting on, going to the next meeting with the Russian president. Only after the gas price has dropped and new, impressive loans with ridiculous interest for Kiev, Yanukovych can press on the European integration brake and redirect to integration with Russia and the CU. But will the “partners” from the West allow him to do this? It seems that those are close to not give. After all, they already see the “meat” coming to them under their own power, and feel its smell ... In such a situation, the president of Ukraine will only have to continue his favorite policy - wag his tail in both directions, looking with one eye “there” and “secretly” winking with the other eye "here".

Ctrl Enter
Noticed oshЫbku Highlight text and press. Ctrl + Enter
We are
Results of the week. “There were good people ... Warmed up, robbed. That is, picked up, warmed ... "Situational analysis of the death of the MH17 flight (Malaysian Boeing 777), made on the basis of engineering analysis from 15.08.2014
96 comments
Information
Dear reader, to leave comments on the publication, you must to register.