How? Again reform in the Ministry of Internal Affairs?

November 13 2013
202
The other day law enforcement officers celebrated their professional holiday, in the course of the reform “Nurgaliyev-Medvedev” renamed together with the name of the structure itself, which we have long been accustomed to calling police. It seems that the renaming date is not round, and therefore the holiday did not spill over to the mass festivities of the Russian police, but there was a lot of interesting things around the holiday this year. And this is worth talking in more detail.


First of all, the Russian law enforcement officers in a peculiar manner congratulated the VTsIOM, which conducted a sociological study on the attitude of Russian citizens to employees of the internal affairs bodies. One of the questions asked to respondents was as follows:

Do you trust the police officers of our region or not?

We present the final result - the answers that were given by the Russians during the VTsIOM survey.

If you believe the results presented by VTsIOM (and in the course 1600 people were interviewed in 42 subjects of the Russian Federation), it turns out that 45% of respondents are negative to the police in the regions, and 46% are positive. Taking into account the statistical error voiced by the VTsIOM employees with a maximum of 3,4%, we conclude that there is an equal number of positive and negative things in Russian society in relation to law enforcement officers.

VTsIOM proposes to compare the results of the 2013 survey of the year and other years. For example, in the 2005 year, there were a total of 37% positive evaluations of the work of law enforcement officers, and negative - 57%. Such figures (once again - if they can be trusted) indicate a decrease in the number of dissatisfied employees of the Ministry of Internal Affairs.

Another question was asked during the study:

How do you generally evaluate the work of the police in our region?

Here, 21% of respondents answered “very well” and “well” - also 21% responded, the rest either rated the work of the representatives of the internal affairs bodies as “moderate”, or found it difficult to answer. Eight years ago, the ratio was 13% versus 33% not in favor of positive ratings.

Thus, VTsIOM showed us and us that we treat the police better than we did the police a few years ago ... Well, it turns out that there are positive aspects of the reform, and a gift to the employees of the bodies for their professional holiday ...

Interestingly, in February of this year, the Ministry of Internal Affairs itself decided to conduct such research (although it was purely on the Internet), and since our people “visiting” the Internet turns into more courageous in their judgments, the result was appropriate. It turned out that more than half of the users who spoke out (only in the first few days, about 40 thousand people shared their opinion) did not see any improvements in the work of the police lately. Changes for the better saw 27% versus 51% not seen.

Then the deputy head of the Ministry of Internal Affairs Sergey Gerasimov spoke about this result:

It often happens: mother goes with the child and scares that if he behaves badly, the police officer will take his uncle. And if she said “he will save you,” this would be the main reward for us.

In general, it turned out that the whole thing is not in the police, but in the “improper upbringing” of the parents of their children, and in the “wrong attitude” of society towards the law enforcement officers. Interesting logic, especially if you imagine a situation where a mother says to her little tomboy: you will behave badly, an uncle policeman will come and save you ... Well, the only possible benefit is a tomboy for about five minutes, at least, will try to understand the meaning of this phrase, and therefore time for pranks will forget ...

However, it’s time to digress from the wonderful numbers of statistics. Especially when you consider that the Russian law enforcement officers “congratulated” not only VTsIOM, but also a completely unexpected character in this regard - the unforgettable Alexey Kudrin. Why unexpected? Yes, because lately, Alexey Leonidovich has increasingly spoken about the economic threats to Russia, the reduction in the growth rate of the financial system of the Russian Federation, and then suddenly he was carried towards the Interior Ministry. It turned out that statements about the work of the Ministry Kudrin did not allow himself to be accidental. The fact is that the ex-Minister of Finance is the head of the so-called Committee of Civil Initiatives and, moreover, has recently been a member of the public council under the Ministry of Internal Affairs. It was the entry of the chief economist of modern Russia into this very advice that gave him (Kudrin) an excuse to think about how “we better reform the Ministry of the Interior”. 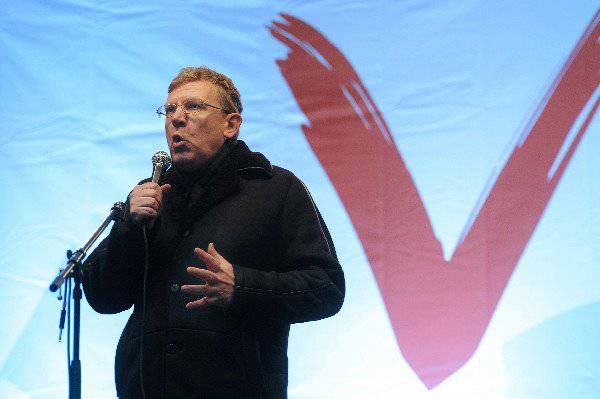 Many will say: how to reform? Reform again ?! Have not yet been reformed?

Mr. Kudrin himself answers such readers to their poignant questions, believing that the reform of the Ministry of the Interior needs to be started again. That is - not to continue, but to start over.

It turned out that the Civil Initiatives Committee, headed by Alexei Kudrin, carried out painstaking work in close contact with the Indem political research foundation and employees of the Institute for Law Enforcement Problems (IPP) of the European University in St. Petersburg. After such contacts, the idea of ​​how to reform the Ministry of Internal Affairs came into being. This idea was voiced by the ex-Minister of Finance.

He said that for more effective work of the Ministry of Internal Affairs, the police should be divided into three sectors: municipal, regional and federal. It turns out that such a division can increase the level of people's confidence in law enforcement officers, and trust in turn will raise the Russian economy to acceptable values. To ensure that the trust was comprehensive, Alexey Leonidovich associates propose to delegate to the federal police sector the investigation of serious and especially serious crimes. Regional policemen will be engaged in traffic regulation, investigating a minor crime. Well, the burden of law enforcement, the solution of local turmoil and everything like that will fall on municipalities. In this case, the municipalities will report on the results of the work done exclusively to the local authorities. In addition, Kudrin proposes to take away the Interior Troops from the Ministry of Internal Affairs, handing them over to the Ministry of Defense, so that the Ministry of Internal Affairs would feel complete freedom in the fight against crime ... And according to the Kudrinsky reform plan, the issuance of driver’s offices, the Ministry of Transport licenses .

Such a reform, according to the Civil Initiatives Committee, will make it possible to optimize (oh God! - again optimization?) The number of law enforcement officers (reduce the number by 22-27%), and the reform does not require investment. Well, and besides, it is declared that the police will, after such a reform, become closer to the people ... The authors of the reform project are confident that such steps will almost double the budget of the Ministry of Internal Affairs. Here, it turns out, where the economic Kudrinskaya vein manifests itself.

Of course, raising the budget by finding out internal reserves is good. But, to be honest, the logic at the same time looks, to put it mildly, strange ... After all, even if we assume that the Interior Ministry will hand over the Internal Troops to the Ministry of Defense and the licensing of private security firms to the Ministry of Justice, will not these additional agencies be required to take on new functions? That is, at the suggestion of Kudrin, savings in the Ministry of Internal Affairs will be based on the increase in funding for other ministries? To take water in one knee of communicating vessels and pour it into another ... For a budget, neither hot nor cold. Or budget vessels are not reported?

And the thesis that after the division of the system of the Ministry of Internal Affairs into three levels, each of which will deal exclusively with its field of activity, the police will become closer to the people, does not look unequivocal. The reason for this ambiguity is that in some cases, the so-called municipal police can finally turn into a sort of local nukers - guards of the interests of municipal princes. There are fears that such “nukerstvo” is already capable of consolidating itself at the legislative level in the regions of, for example, the North Caucasus. And if we take into account the fact that the police are proposed to cut down on the number of employees by a quarter, then we will have to forget about law enforcement in, let's say, problem areas. You can certainly hope that an honest and incorruptible precinct "Uncle Stepan" will turn any of the plots entrusted to him into a branch of heaven on Earth after he submits exclusively to local authorities, but to feed such hopes is somehow not serious ...

If you practice this kind of logic (the logic of new optimizations and cuts), then you can agree at all that it’s time to disband the Ministry of Internal Affairs, and for all our people, for our own safety, they must keep the ax under the bed or the cobblestone in the bosom ... not cheap whether Alexey Leonidovich ...

Ctrl Enter
Noticed oshЫbku Highlight text and press. Ctrl + Enter
We are
Police cut. Who will keep order?Epiphany "festivities" on euromaidan
202 comments
Information
Dear reader, to leave comments on the publication, you must to register.