The victory of the cockroaches, or the decline of the United States as an alternative to the new world 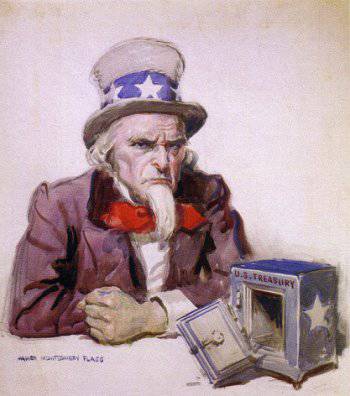 On the agency website News The Inter Press Service recently featured a remarkable article by John Feffer, entitled “A World Without the USA.” Among other things, the material talks about the inevitable, albeit slow, decline of that world gendarme and world financier who is trying to "steer" the entire planet. There is also a duality of attitude towards the United States, for example, China and some countries of Latin America: at the same time they do not want American hegemony, but at the same time they are very dependent on trade in Washington. The author pays attention to such an important aspect as the US presence in the regions: where it is shrinking, the era of prosperity begins.


John Feffer is co-director of Foreign Policy in Focus at the Institute for Political Studies in Washington. The Narrative of a World Without America Scientist precedes a brief retelling of the content of 2007's best-selling book “A World Without Us”, written by journalist Alan Vaisman.

The book describes the planet, recovering from the disappearance of people. Skyscrapers fall apart, bridges fall into rivers, but dense forests rise and buffaloes roam everywhere. Ironically, Feffer calls this process an optimistic vision of the future. But optimists are buffalo or dolphin. No more ranchers or fishermen with their nets. The author also refers cockroaches to optimists: after all, dichlorvos is also no more.

Man, this future does not apply. In fact, Weisman warns people who naively assume that they will always exist - regardless of the threats. A threat is enough: nuclear weapon, climate change, pandemics ...

From the fantastic bestseller Weisman, the author of the article turns to the reality of the 21st century. It comes to geopolitics. What would a world be like without the United States?

Topicality of the topic, the author emphasizes the recent "shatdaunom" of the American government (recall, it was "turned off" for 16 days). This very “shutdown” led many to imagine a world in which the United States did not disappear so much as would suffer an internal fiasco. Concentrated on domestic issues, Washington would abolish Pax Americana (or Pox Americana, as the anti-imperialists would prefer to say; Pox - syphilis) and avoid the role of world financier and gendarme.

The answer to the question “Will the world become better?” Depends on the point of view - just like Comrade Vaisman.

Americans profit from economic and military hegemony. This profit is expressed in the form of GDP per capita, a strong dollar, and even dependence on English as the main means of communication in the world.

Americans take it all for granted. But the non-Americans feel differently. Non-Americans, the author ironically puts in place those buffaloes, dolphins and cockroaches in a world free of people. Anyone who lives outside the United States could well applaud the end of the American superpower.

The analyst notes that in the midst of the recent political crisis in Washington, the Chinese news agency Xinhua issued an article in which the "perplexed world" proposed to start considering the possibility of building a "de-Americanized world." The Chinese expressed recognizable arguments: The United States "abused its superpower status and brought even more chaos into the world, shifting financial risks abroad, igniting tensions in the regions against the backdrop of territorial disputes and under the guise of outright lies unleashing unwarranted wars." According to Chinese material, deamericanization can be a strengthening of the United Nations, replacing the dollar as a key currency, providing developing countries with more influence in international financial institutions. According to John Feffer, all this seems like reasonable offers.

However, as some American commentators pointed out, this provocative article does not necessarily reflect the opinion of the Chinese government: after all, Beijing depends on the US economy, whether it is American consumers or Wall Street liquidity. Beijing depends on the fact that Washington is more or less holding back the ambitions of its key allies in the Asia-Pacific region.

The same can be said about the countries of Latin America, which have long condemned American imperialism. Like China, the author notes, Latin America is largely dependent on trade with the United States.

Most analysts who speak of the decline of the hegemon (from Paul Kennedy to Farid Zakaria), agree on this duality of attitude toward the United States. However, the United States will gradually come into relative decline, for which there is no viable alternative.

The author's conclusion: just as people need to change their relationship with nature, the United States must reconfigure its relationship with the world. In both cases, the worst scenarios will lead to the victory of the cockroaches.

Wonderful words, add on my own. True, the White House is clearly not ready to give up the role of a hegemon in the world, despite the past and the imminent government shutdown that may occur in January or February of 2014, when Republicans in Congress will again deal with President Obama.

If, however, we introduce into geopolitics the so-called moral component, then here Washington does not intend to abandon the declared “exclusivity” that the highest officials of the state have been promoting in recent weeks, from Barack Obama to John Kerry.

As a result, the United States is likely to try with all its might to preserve the old world order that they liked so much since the collapse of the USSR. As for the financial crisis, the petrodollar superpower has one proven method: raising the national debt ceiling.

Observed and translated by Oleg Chuvakin
- especially for topwar.ru
Ctrl Enter
Noticed oshЫbku Highlight text and press. Ctrl + Enter
We are
Results of the week. "A thief should sit in jail!"Strangulation: the context, conduct and consequences of the American naval blockade of China
31 comment
Information
Dear reader, to leave comments on the publication, you must to register.