Steadfast Jazz-2013. NATO before the roll to the east 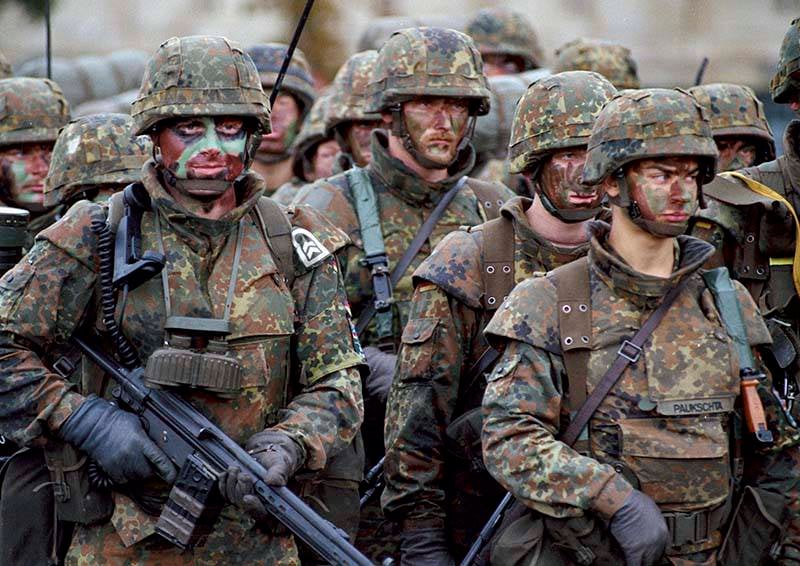 9 November 2013 of the year in Poland, the Baltic States and in the Baltic Sea area ended the largest military exercises of the North Atlantic bloc during the 65 years of the North Atlantic bloc, the Steadfast Jazz-2013 military exercises. The 7 000 troops from 28 NATO member states, as well as Sweden, Finland and Ukraine, which was symbolically represented by a company of the Crimean marines, took part in the exercise.


NATO's attention to the Baltic geopolitical region is increasing. Here lie the borders of the Union State of Russia and Belarus, the most important sea and pipeline routes, power lines, here is a whole necklace of nuclear power plants. The withdrawal of US and NATO troops from Afghanistan increases the capabilities of the North Atlantic allies to increase their presence in Eastern Europe, particularly in the Baltic. NATO does not relax its pressure in eastern Europe. Many recent events directly indicate that the United States and NATO continue to consider Russia and allied Belarus as one of the main geopolitical opponents.

NATO Secretary General A. Fogh Rasmussen spoke vaguely about the tasks of Steadfast Jazz-2013: “The purpose of these exercises is to make sure that our rapid reaction forces are ready to protect any ally, take action in any area and deal with any threat.” According to the scenario of the ended exercises, a certain “neighboring state” presented Estonia with territorial claims and, after refusing to satisfy them, committed direct military aggression against Estonia. In contrast to the more cautious Western Europeans, Latvian Defense Minister A.Pabrik found it necessary to emphasize in an interview with Reuters, which “neighboring state” is this: “Russia has increased its pressure in the Baltic region over the past five years. Steadfast Jazz teachings are important to us as the first teachings where we learn to protect our territory. ”

A special feature of the Steadfast Jazz-2013 was the testing of the protection of electronic communications and computer networks, as well as the conduct of massive cyber attacks. Back in 2008, the Joint Center for Excellence in NATO Cyber ​​Defense was established in Estonia. Specialists of the center took the initiative to equate an attack on the network resources of NATO or one of the members of the bloc to direct aggression. In this case, NATO must respond with a coordinated cyber attack, disabling the enemy’s military control systems, blocking its state institutions, banks, hacking Internet sites, disrupting communications, life support systems and industry, shutting off electricity and water supply. In fact, we are talking about the complete disruption of life on the attacked territory.

NATO’s training attacks on Ukraine were conducted (despite the participation in the maneuvers of the company of the Ukrainian marines). According to the teachings legend, these attacks were a response to the recent actions of Ukrainian hackers: the hackers from the Anonymous group hacked several Russian and Polish sites, the website of the European Investment Bank and the Estonian Ministry of Defense, protesting against Ukraine’s participation in any military blocs.

In connection with the promotion of NATO’s area of ​​responsibility to the east, plans are being revised to deploy forces in the territories of NATO member countries bordering the Union State of Russia and Belarus. The United States is planning to transfer a significant part of its troops from Italy and Germany to Poland and the Baltic States in the near future, for which modernization of airfields, land transport network and seaports in the Baltic is in full swing. The rebuilt Polish ports of Swinoujscie and Gdynia can already receive American and British landing and transport ships. According to NATO standards, seven Polish airfields have been re-equipped, where all types of aircraft can now land. The Lithuanian, Latvian and Estonian airfields at the Zokniai, Lielvarde and Emari air bases were modernized.

The military activity of NATO at the borders of Russia and Belarus far exceeds the scale of the defensive measures of the Union State. Only in 2013, in addition to Steadfast Jazz-2013, several NATO exercises took place in the Baltic region - BALTOPS, Saber Strike, Baltic Eye, Kevadtorm.

From 20 to 25 on April, Lithuanian ground forces maneuvers were held in Panevezys. Then three more stages of these teachings followed. The first stage included the organization of camouflage, protection and defense of objects, the second - the organization of joint defense areas of responsibility, the third - the training of personnel, the fourth - integrated tactical exercises involving the assigned support and support units.

From August 25 to September 5, the NATO Air Force Brillant Arrow drills were conducted in Norway, during which maneuvering aerial battles and bombing of ground targets were practiced. In the second half of September, the naval component of these exercises was practiced on Brilliant Mariner maneuvers; tested the skills of organizing a naval blockade of Russia and, above all, the most vulnerable in this regard, the Kaliningrad region.

The main training ground for the Steadfast Jazz-2013 exercises in Poland was prepared and deployed in the Dravsko-Pomorsky region by Polish and French military personnel. In Poland, during the maneuvers, the headquarters of the French rapid reaction force, which is permanently stationed in Lille, is also located. The Joint Command Headquarters operated at the Adazi test site in Latvia. Three more operational control centers were connected to the exercise - the Air Force headquarters in the German Ramstein, the headquarters of the special operations forces in the Latvian Pabreda, and the headquarters of the Navy in the Italian Toronto.

The main activities of the ground forces and the Air Force took place in Poland. Flying aviation began on November 5 from the air base in Poznan (Poland). Pilots from Poland, the Czech Republic and Hungary made two flights a day. Flight control was carried out from the Air Force Center in Warsaw. Refueling in the air was provided by the French tankers KC-135. Germany tested the operations of its S-160 transport aircraft and Avax reconnaissance aircraft.

Before the start of the naval exercises as part of the Steadfast Jazz-2013 in the Polish port of Gdynia 27 in October, a meeting of representatives of the Navy of the NATO member states took place on board the ship De Ruyter. The commander of the naval component of the exercises was a Pole M. Koschelski. In total, 17 naval officers from Poland, 3 from Italy and 3 from Latvia were included in the headquarters.

In addition to the flagship De Ruyter, Polish warships (frigate Gen. T.Kosciuszko, submarine Sokol, anti-submarine helicopters Mi-14PL, deck helicopter SH-2G) and the Italian destroyer Duilio took part in the exercises on the Baltic Sea. A total of 15 ships from NATO's 8 countries participated in the exercise, as well as a special NATO mine action defense team from six ships of the Navy of Poland, Belgium, Estonia, Germany, the Netherlands and Norway, reinforced by minesweepers Czajka (Poland) and Ledbury (United Kingdom).

The main task of this naval grouping was to use the minefields to lock up the Russian Baltic Fleet in the Gulf of Finland and Kaliningrad and to ensure the unhindered approach of the US and British landing ships through the Danish straits. Before the start of Steadfast Jazz-2013, NATO strategists carefully studied the experience of the Great Patriotic War, when Germany blocked the Soviet Baltic fleet in a similar way.

The most active part in the maneuvers was France, which sent 1 200 to its servicemen (11-I airborne brigade and 2-th dragoon regiment).

The Steadfast Jazz-2013 exercises led to a further increase in tensions in the Baltic region. Russian Deputy Minister of Defense A.Antonov said that from these NATO maneuvers "breathes the spirit of the cold war." But what the Italian Corriere della Sera wrote about these exercises in the issue of 4 in November 2013 of the year: “This is about the largest joint exercises in this region for the entire post-war history. ... This fact cannot please the Kremlin in any way. ... The timing of the exercises was not accidentally chosen: NATO leaves Afghanistan, the Alliance abandoned the old Atlantic strategy and, perhaps, finds another, at the eastern borders of Europe - where the controversial gas pipelines, the Russians Tanks, arranging unpleasant surprises in Georgia, and besides, Ukraine found itself in a difficult situation, as it asks to accept it in the EU. ... A hypothetical invader is not called, but everyone understands that his name is Vladimir and he lives in the Kremlin. Most recently, he introduced trade sanctions against Lithuania, just before the European summit in Vilnius, where Ukraine will take a decisive step towards the EU. ”

The alliance’s Internet resources directly indicate that after the withdrawal of Western Coalition forces from Afghanistan, NATO’s plans will focus on Eastern Europe, primarily Poland and the Baltic States ... It is assumed that 9 divisions of the United States, Great Britain and Germany. At the same time, the United States and Great Britain intend to increase their Baltic presence fleet. An interdepartmental committee has been set up in Lithuania to receive new NATO units. At the airbase in the city of Lask (Poland), American F-16 aircraft are being relocated from the Aviano airbase (Italy). In Poland, 5 advanced fuels and lubricants bases and 6 NATO early warning radar points have been created. In 2012, the NATO Energy Security Center appeared in Vilnius.

Considering all this, it is no longer possible to take seriously the statements of that kind, which, they say, the existence of NATO in modern conditions "does not make any sense." The meaning of the existence of NATO is to continue the expansion of this military bloc to the east. The strategic concept of such an expansion was adopted by NATO in the 1999 year, on the days of the bombing of Yugoslavia, and no one in Brussels canceled its associated plans.

Ctrl Enter
Noticed oshЫbku Highlight text and press. Ctrl + Enter
We are
NATO exercises: European polygons waitingNATO is preparing for the teachings and fighting off criticism
56 comments
Information
Dear reader, to leave comments on the publication, you must to register.