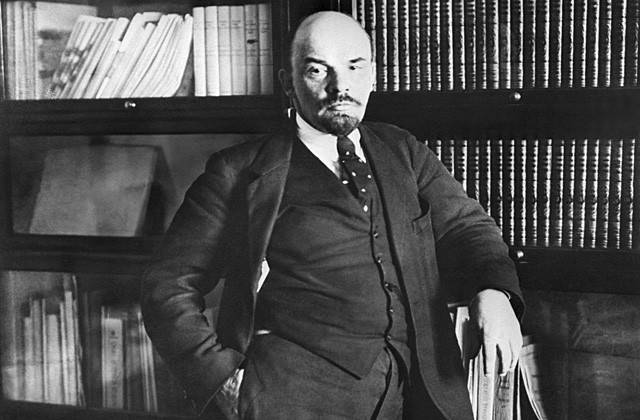 
November 7 marks 96 years since the October Revolution. All this time (plus a few more months) there is a steady myth about the financing of the Bolsheviks by the Germans. The nature of this error is understandable - especially today, during the second “stagnation”, when not only citizens interested in politics, but also a significant part of the authorities cannot understand how something can happen in Russia according to the will of the people. For any action of a “politicized group of persons”, evil intentions of the West, masons, Jewish bankers, secret world government are visible (this list is endless).

By the beginning of the October Revolution, the number of members of the Bolshevik Party was about 80 thousand people, whereas the Cadets had 90 thousand, the Mensheviks had 150 thousand, the Social Revolutionaries had about 700 thousand members. These figures served as an additional argument for those who were serious about the "conspiracy theory": it consisted in the fact that the relatively small Bolshevik party, which also did not have wide popular support (22% in the Constituent Assembly elections against 54% among the SRs ), could not make a revolution on its own.

There was a second reason to bestow demonic forces on the Bolsheviks. With all the relative small numbers and low popularity, the Bolsheviks were the most energetic political group in 1917, which did not accept any compromises. In the summer of 1917, only they defended two ideas - the most popular among the population and the most unpopular among the government (the Mensheviks, the Social Revolutionaries and the Cadets) - about earth and peace. The implementation of these two main popular requests, as other political forces of that time believed (and история proved them right), inevitably had to lead to confusion, separatism and the boycott of Russia by the Entente. Therefore, the Provisional Government decided to stop the Bolsheviks at any cost.

The Provisional Government was democratic, and in order to neutralize the Bolsheviks in June-July 1917, it took measures that today would call PR: this is how information came about the financing of the RSDLP (b) by the German General Staff (but several Bolsheviks accused of treason, for example Trotsky , still imprisoned for a short time).

The forgery was sewn with white threads, but nonetheless the Bolshevik rivals in the socialist movement (the Social Revolutionaries and Mensheviks), and later the whites and counter-revolutionaries of all stripes, seized on it. Moreover, the “documents” on the financing of the Bolsheviks by the Germans are still taken seriously by a part of politicized Russians, by official agitprop (from television preachers to pop historians) and even by high-ranking bureaucrats. "Russian Planet" decided to recall how this falsification appeared.

"Compromising" created on the same typewriter

The famous English intelligence officer George Hill in his autobiographical book “My Spying Life” tells who made fake documents about the financing of the Bolsheviks by the Germans. Hill spent almost two years in revolutionary Russia, beginning in the summer of 1917. He was an ardent anti-communist and participated in several conspiracies against Soviet power. So there is no reason to suspect Hill of sympathizing with the Bolsheviks.

The initiator of the legend that the Bolsheviks, in particular Lenin, were agents of Germany, became Minister of Arms of France Albert Thome, and the developer and performer - the captain of French intelligence, Pierre Laurent. It was he who advocated in the summer of 1917 the idea of ​​the use by the Germans of the Bolsheviks and Lenin personally as "paid German agents." Boris Nikitin, the counterintelligence chief of the Provisional Government, helped him in disseminating this information.

In 1918, in Petrograd Hill, he witnessed the acquisition by one of the agents of British intelligence of the SIS a document allegedly confirming that Lenin and other Soviet leaders belonged to espionage in favor of Germany. Hill himself recalls: “Lenin and Trotsky were accused of being German spies. Indeed, it was very strange that Russia was waging war with the Germans, and Lenin and thirty other Communists were given the opportunity to drive German territory in a sealed train, and he arrived safely at the Finland Station. When I was in Petrograd, our worker approached me and said that he had bought for 15 thousands of pounds (150 thousands of rubles in gold) a document that indicates and confirms that Lenin and Trotsky are German spies. 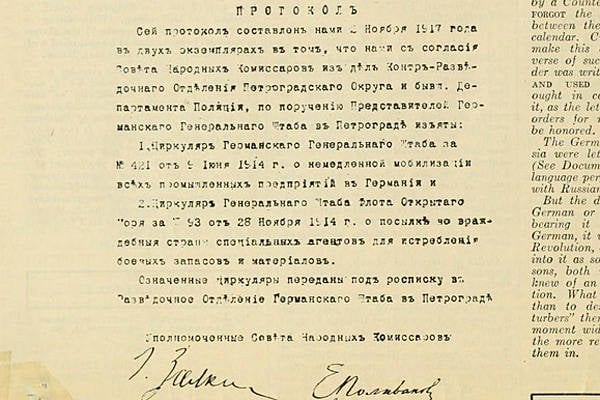 The document was so plausible that it left no doubt that they were guilty. Then he received several more documents, and nowhere was there any mistake. But once I took a magnifying glass and found that everywhere in these different documents, the Russian letter "e" is a bit not written. I immediately stated that it was a fake. Found a man who fabricated these documents, and during interrogation, he confessed to their forgery.

Then our employee from SIS said that he did not want the British treasury to suffer because of this error, and we sold these documents to the Americans for 25 thousand pounds sterling. The Americans distributed them in the Kolchak and Denikin armies. ”

The fake received in the historical literature the name "documents of Sisson" (after the name of the American publisher Edgar Sisson). In Russia, it is still customary to refer to the multi-volume affairs of the Kerensky government and to the special commission created by it, which allegedly established the fact of the participation of "German gold" in the Russian revolution.

This commission was really created, and it established some facts. It turned out that the German General Staff did not give any money to the Russian revolution: the war consumed all the resources of Germany. In fact, the money for the revolution came from France, but not the Bolsheviks, but the Socialist Revolutionary Party, whose members were part of the Kerensky government. Therefore, the investigation was quietly minimized, and the cases themselves were archived.

English scout Hill tells the backstory of the "Sisson Documents". At the end of October 1918, the United States Information Bureau publishes a pamphlet entitled “The German-Bolshevik Conspiracy”. It contained about 70 documents allegedly proving that Lenin and Trotsky were paid agents of the German special services and Walter Nikolai, head of the German military intelligence. True, if the publisher of the brochure knew the structure of the top military administration in Germany, he would not include these documents, sold to the British, and then falling into the hands of Sisson, as clearly false in the book, as Nikolai did not deal with political actions. It was the prerogative of the political department of the General Staff or the Ministry of Foreign Affairs.

Bribing the Bolsheviks is also not proven. In the secret fund of the intelligence service under the High Command of Germany there were only 450 thousands of marks for which intelligence agencies were required to maintain both in the East - against Russia, and in the West - against France, England and Belgium, and later the USA. Who Lenin was was also unclear. “I didn’t know anything about the Bolsheviks then, but I only knew about Lenin that he was a political émigré Ulyanov living in Switzerland,” Nikolai wrote in his memoirs.

Another English intelligence officer, Bruce Lockhart, also talked about forged documents. “For some time they circulated in circles associated with the allied missions in Petrograd. One series of "originals" was acquired by an American agent. A few months later, it was found that these letters, allegedly coming from various places, such as Spa, Berlin and Stockholm, were typed on the same typewriter, ”he recalled.

The appearance of fake were outraged in Germany. 2 April The X-NUMX of the Deutsche Allgemeine Zeitung, on behalf of the General Staff, the informing department of the German Foreign Ministry and the State Bank, stated that the American brochure was “nothing but unfair and ridiculous forgery”.

Minister F. Scheideman, whose last name allegedly signed one document, was enraged: “I declare that this letter is fraudulent from beginning to end; that all the events with which this letter links my name are completely unknown to me. ”

What the "Sisson's documents" are is well understood by the president of Czechoslovakia, Tomas Masaryk. He wrote in his memoirs: “I don’t know how much the Americans, British and French gave for them, but it was immediately obvious to a knowledgeable person that our friends bought a fake: all the documents that had to be sent from different states were written on one typewriter ... "

Was the leader of the Social Revolutionaries "German spy"

At the beginning of the 1920-ies a lot was said about the connection of the Social Revolutionaries with the German General Staff. First of all, it was about one of the leaders of the Social Revolutionaries, Viktor Chernov (he was the first and last chairman of the Constituent Assembly). The investigation of this case involved the famous counterintelligence party Social Revolutionaries Vladimir Burtsev. Mikhail Pervukhin, also an SR, a political emigrant who lived in Italy (by the middle of the 1920 on the basis of anti-communism, he became a staunch fascist, the author of the “Russian Fascist Manifesto”) brought him on this subject.

In February, 1921, Mikhail Pervukhin, wrote from Rome to Vladimir Burtsev:

“Apparently, you are standing on the threshold to opening the second Azephic region, only it will bear the name of Chernivshchyna. This is a very serious matter. So I consider it my duty to tell you what I know.

In 1916, in Rome, agents of the Italian political police stubbornly circled around me, trying to quietly elicit information about the most prominent representatives of political emigration. The game was rough, I was on my guard, and the gentlemen did not have to use it from me. But even then I was struck by the fact that the people obviously sent by the police reduced all these conversations to two persons: a certain Ravenhof, whom the Russian colony considered to be a “security guard” and who was arrested in Paris on suspicion of espionage in favor of Germany, and about Victor Chernov. 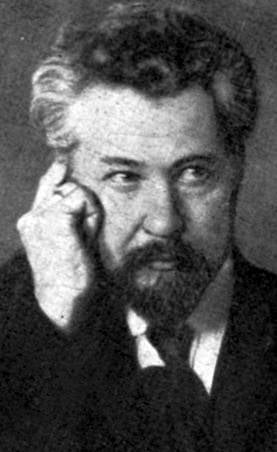 From the slips of Italians-journalists, if they are not members of the police, but still hobnobbing with her, I was convinced that since the spring of 1915, the Italians had the conviction that Chernov was an agent of Germany. Behind him was installed the most vigilant surveillance, and not as a Russian revolutionary, but as a German agent. When Chernov from the Riviera moved to Switzerland, where he engaged in defeatist propaganda, Italian agents followed him there in order to “light up” those who had come in contact with him and then made his way to Italy.

It was enough to be considered Chernov's acquaintance to fall under suspicion as a German spy. Because of his kinship with Chernov, an honest man, a young medic Alexander Filipchenko, who lived in Rome, came under this grave suspicion; and the police followed his every move.

It’s not for me to judge how justified these Italian suspicions are. But they existed, and even more - it is not about “suspicions”, but about “certainty”. ”

However, in this troubled time, all the political forces of Russia did not shun foreign aid. As EK Breshko-Breshkovskaya, one of the leaders of the Social Revolutionary Party, admitted in December 1917, financial investments from the USA into the party of Social Revolutionaries amounted to about $ 2 million. This assistance was rendered in the hope that the Social Revolutionaries launched large-scale anti-Bolshevik agitation. For German money in 1917 — 1918 and for English in 1919 — 1921, the Georgian Mensheviks lived. In the Civil War, the White army was openly funded by the Entente. It is possible that some foreign forces were also engaged in fueling the Bolsheviks, but the documents that cite this are a crude forgery.

Ctrl Enter
Noticed oshЫbku Highlight text and press. Ctrl + Enter
We are
Party of Socialist Revolutionaries as a baby TsakhesInfluence of Freemasons and Other Secret Societies on Politics in Russia: Myths and Reality
74 comments
Information
Dear reader, to leave comments on the publication, you must to register.