Combat weapons “float away” from the Ukrainian army en masse 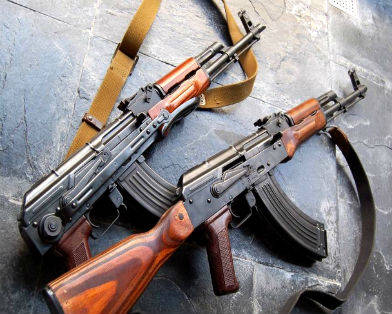 Militiamen mark an increase in illegal turnover in Ukraine weapons. The Ministry of Defense plays a significant role in this, selling on the domestic market mass-dimensional models of pistols, revolvers and machine guns, which the "craftsmen" then re-convert into military weapons, reports ZN.UA.


Deputy Interior Minister Viktor Ratushnyak informed the government that from August 30 for seven days of conducting a targeted operational-preventive operation “Weapons and Explosives”, 707 facts of illegal trafficking in firearms, ammunition and explosives were revealed. In addition, 631 has disclosed a criminal offense related to trafficking and the use of firearms and explosives.

And for the entire period of the operation, 10 746 firearms, ammunition and explosive devices, including one machine gun, two machine guns, around 30 carbines and rifles, 96 revolvers and pistols, 77 homemade weapons, 39 grenades, XNX explosive devices.

Among these many thousands of pieces of military equipment, most of them are ammunition, since their records are kept individually.

The Defense Ministry, which organized a sale of weapons on the domestic market of Ukraine, provides substantial assistance to the criminal world in this. Military weapons — pistols, assault rifles, machine guns, and ammunition — most of which are sold to citizens in the form of supposedly safe, mass-sized weapons models — float out of the Armed Forces massively.

The Commission of the Ministry of Defense concludes agreements with the so-called business entities with the Cabinet of Ministers in the field of trade in surplus military property, including the sale of weapons and military equipment in the domestic market.

In a letter to the deputy head of the Ministry of Internal Affairs, it is noted that the so-called military weapon kits (Makarov pistols, Nagan revolvers) without barrels are sold to enterprises specializing in the manufacture and trade in special equipment, and subsequently are equipped with trunks for shooting bullets with rubber bullets. The cost of such weapons in retail is about 4 thousand hryvnia, while Ukrspetsexport and Ukroboronservis sell these products at 30 – 50 hryvnia per unit.

The scheme used in this case is quite simple. The authorized enterprise, having concluded a contract with the Ministry of Defense for the sale of weapons in the domestic market, holds a competition. As a rule, "their" enterprises take part in the competition, therefore its result is quite predictable. Further on, the transfer of ownership of the weapon takes place. This is the only weak point in the transaction. Then the enterprise-owner of the weapon, without receiving it in the military unit, instructs the seller to carry out the conversion of products into mass-dimensional models or devices for shooting rubber bullets. At this stage, it is very difficult to establish whether these products were really demilitarized, since they have already been deregistered in the armed forces.

Such a model of weapons can be bought without any permits and licenses. Given the "golden hands" of home-grown craftsmen, so many restored pistols, machine guns and machine guns enter the shady market for weapons, which is enough to equip an army of a small country, writes a columnist.

Ctrl Enter
Noticed oshЫbku Highlight text and press. Ctrl + Enter
We are
Innovation Day of the Southern Military District: layouts and modelsResults of anti-terrorist work on Dagestan in April 2014
33 comments
Information
Dear reader, to leave comments on the publication, you must to register.