November 12 2013
9
The car bombing on Tiananmen Square 28 in October of this year was officially called a terrorist attack. 5 people died, 38 suffered injuries of varying severity. Beijing hastened to blame the Uighur nationalists for everything, who allegedly gained experience in Syria and hurried to transfer the armed struggle against the PRC to the territory of the enemy. In fact, the attack has many unknowns: for example, why did a suicide bomber drive with two passengers who, according to the preliminary version, are his relatives? Establish this to be the investigation, but the results of the investigation are unlikely to be made public. 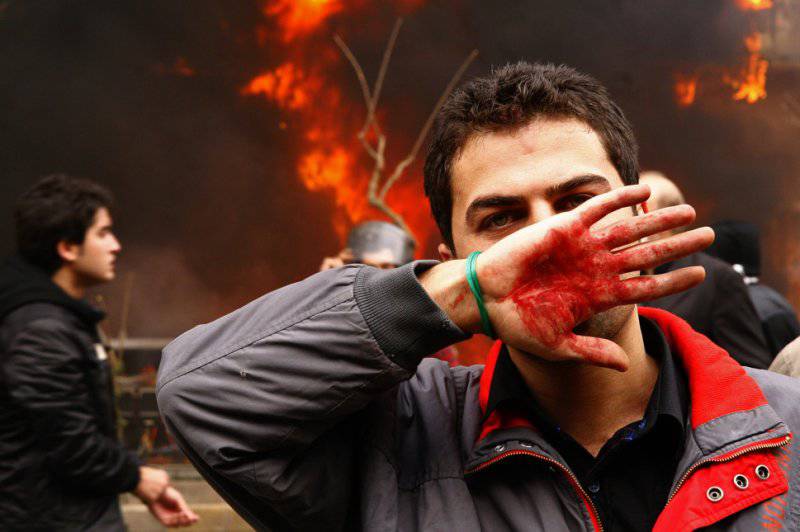 In any case, the statements made by the Chinese authorities reminded the world of the existence of the Uyghur problem and its connection with radical Islam. Without going into history and ethnography, it can be concluded that Islamism for China presents the same problem as for Russia, namely, it impedes the development of international economic integration, albeit in a slightly different way.

It should be understood that in the Xinjiang Uygur Autonomous Region of China, at the same time, secular separatists and radical Sunni pan-Islamists are active at the same time. The first act in the European spirit, trying to create a national Uygur state. This current has much in common with the independence movements of the Basque Country, Catalonia or Scotland. Nationalists are poorly organized, their lot - spontaneous uncontrolled demonstrations. Vivid examples of such speeches are in Hotan in March 2008 and in Urumqi in August 2009. The military easily crushes the rebels, followed by the mass arrests of the opposition.

In turn, the Islamic Movement of Eastern Turkestan - a regional radical Sunni organization - is more structured and organized. It has no relation to secular separatism and sets itself the goal of building a theocratic Sunni state. The unattainable ideal for the IDTF is the conversion of the whole Celestial Empire to Islam. The Islamic Movement of Eastern Turkestan denies the “heretical” modern ideas of nationalism and considers the Uygurs primarily as Muslims.

The movement was founded in 1993, but it was only activated by the end of 90, when it committed several resonance attacks. Presumably, the organization is associated with Al-Qaida, although there is no strong evidence for this. It is known that in the ranks of the militants may be people from Afghanistan, Pakistan and the states of Central Asia. The IMTT acts more decisively than secular separatists, and, apparently, “works” by order from abroad. For example, the Islamists successfully used the spontaneous March demonstrations in Khotan in 2008, and carried out attacks on Chinese soldiers under the guise of “oppressed by the regime” Uygurs, allegedly “fighting for our and your freedom”. Fundamentalists were not embarrassed by even the almost semi-annual gap between the events in Khotan and the terrorist attacks: it is characteristic that the raids and explosions were committed in August, just at the time when the next Olympic Games were held in China. The IMTT was tasked with discrediting the People's Republic of China in the eyes of the world community, but the country's leadership did an excellent job with this challenge. Information from the Xinjiang Uygur Autonomous Region came in such small doses that it was not possible to establish an accurate picture of what was happening there.

The poorly organized movement of secular Uygur nationalists is gradually moving away from the front. The niche of relatively peaceful nationalists is ready to occupy well-trained IDTF militants, veterans of several wars.

As stated above, not only the Uighurs, but also representatives of other nationalities are members of the Institute. The collapse of the secular states of Afghanistan, Pakistan and other Asian countries is obvious. The depletion of natural resources, irrational excesses in the economy, the population explosion and the archaic methods of governing the state deprive Asians of their livelihood. A way out of this situation is to flee abroad, that is, labor migration or mercenarism. It is precisely because of the collapse of the Pakistani and Afghan economies that IDVT is constantly updated with new members.

The organization has a suitable social base in the PRC. Traditionally, the coastal regions of China were ahead in their development of the province, located in the depths of the continent. There is a widespread opinion among international experts that the excessive lag in the western regions of the country may have sharply negative consequences for the Middle Kingdom, including the destruction of the economy. Unemployment in the inland regions of China is quite high, and wages are lower there than on the coast. Tens of thousands of labor migrants from Tibet, Inner Mongolia, Xinjiang Uygur Autonomous Region annually go to coastal megalopolises to earn money. Internal migration in China can be compared with similar processes taking place in Russia: people from traditional society, barely in touch with the wonders of modernization, fall into the conditions of a modern world city, where they continue to live according to their own archaic concepts and ideas. Many residents of the republics of the North Caucasus, arriving in Moscow, barely understand Russian; the same is true of the Uygurs, who, having Chinese citizenship, do not understand Chinese or its dialects. The lack of understanding with the Chinese leads to all sorts of interethnic conflicts, the same as in Russia.

The recruitment of unemployed and socially unprotected residents of Xinjiang-Uygur region by members of the East Turkestan Islamic movement is a matter of time and money. Of course, the Muslims of China are in incomparably better conditions than the same Pakistanis, but the thirst for easy money attracts many.

Revival of the Silk Road

But why the Chinese Muslims for the most part still have not joined the Islamists? Why are taxi drivers or porters not going to fight for 150 dollars, as in the early phase of the war in Syria? Maybe because nobody offers this money to them?

Indeed, the IDTF consists mainly of volunteers who are not ready to fight for money, but for the idea, as it seems to them, righteous. There are very few such “altruists”, therefore the organization is weak and unable to wage a long-term organized war. The maximum potential of an IDTT is sporadic terrorist attacks and minor attacks, more like criminal squabbles. Apparently, foreigners who joined the organization did it either out of a sense of solidarity with the co-religionists, or in an attempt to subjugate the nascent Islamist movement of China.

Funding from the fundamentalists of East Turkestan is tight. Unlike sister organizations from other countries of the world, IDVT does not smuggle, racketeer, trade weapons or people drug trafficking. The only known expropriation took place in February 1999, when Islamists managed to steal 240 thousand Yuan. Since then, fortune has not smiled at militants.

The main sponsors of Islamism in Asia and Africa - Saudi Arabia, Kuwait and Qatar - refuse to cooperate with the IFES because they want to maintain good partnerships with China. China is the main consumer of Arab oil, its ever-growing enterprises need uninterrupted supplies of valuable raw materials. Over the past few years, China and the Gulf monarchy have been negotiating on the implementation of joint economic projects aimed at increasing trade between countries. It is in the interests of Saudi Arabia to squeeze out competitors from the Chinese market, and Chinese companies, in turn, want to work in the countries of the Arab world. It would look rather strange if the Saudi princes tried to sow devastation in the Middle Kingdom. On the contrary, in the future, China, Pakistan and the Gulf monarchies can create a powerful economic bloc against pro-Russian and pro-American projects in Central Asia and the Middle East. The vector of Pakistan’s foreign policy is shifting toward China: Islamabad wants to find support from Beijing in reforming the economy, and is also considering the PRC as a counterweight to India. In turn, China is interested in using Pakistani naval bases to provide access to Chinese merchant and naval fleet to the Indian Ocean, and from there to East Africa. Saudi Arabia, like China, wants to create a New Silk Road, which will pass through the territory of Pakistan, connect East Asia with the Front and become an excellent route for the supply of hydrocarbons.

Meanwhile, the training camps of IDTF are located on the borders of the PRC, Pakistan and Afghanistan. In many respects, it is this fact that is responsible for the tension in the Sino-Pakistani relations. What is it? The monarchies of the Persian Gulf themselves put a stick in the wheel?

No, it's just that the United States wants to destroy the New Silk Road at its inception, promoting its own project with the exact same name. The two boys from Khotan, the founders of IDTF, were obviously romantics, and were impressed by the Afghan jihad: in the 90s after the collapse of the Soviet Union and the Taliban victory, organizations like the Islamic movement of Eastern Turkestan were everywhere formed in many countries of Central Asia. At some point, the United States decided to use the fundamentalists as a weapon against China. At the same time, Pakistanis, Afghans, Tajiks and citizens of other states appeared in the composition of the Institute.

The movement will not destroy the Celestial Empire from the inside, as it may seem at first glance: China is too powerful a power to be destroyed by a group of terrorists with primitive thinking. Suppressing international secular integration projects based on the principles of economic cooperation is the main task of the ETIS. Islamic terror in China is designed exclusively for the external consumer: how will the PRC trust the countries of the Islamic world that are attractive for investment if Muslims threaten the security of the Middle Kingdom ?!

It becomes clear why China is not publicizing attacks on its own military personnel and is not trying to carry out a “debriefing” at the international level. The fight against Islamism in the PRC and Central Asia is, first of all, the fight against the United States, which wants to prevent the peaceful development of the integration processes in Eurasia. The last terrorist attack in Beijing, whoever it was prepared and carried out, is used as a pretext for tightening the screws and routing both the Islamic underground and the secular Uyghur nationalists.

How to treat Russia to the current situation? On the one hand, the radicalization of Muslims of Central Asia is unprofitable for Moscow, on the other hand, the construction of a corridor to the Persian Gulf - Pakistan - China also contradicts our interests. In the near future, Russia faces the task of getting out of this impasse, choosing, unfortunately, the least evil out of two.

Ctrl Enter
Noticed oshЫbku Highlight text and press. Ctrl + Enter
We are
China, the Xinjiang issue and the Islamic StateSituational analysis of the death of the MH17 flight (Malaysian Boeing 777), made on the basis of engineering analysis from 15.08.2014
9 comments
Information
Dear reader, to leave comments on the publication, you must to register.