The program of US military airships "blown away"

November 12 2013
28
At the end of 2000, the Pentagon managed to spend almost 7 billions of dollars on a rather ambitious program to develop new-generation airships for military use. However, as a result, none of the promising designs were adopted by the US Army. Once upon a time, at the dawn of aeronautics, airships seemed to people one of the most reliable and promising means of cargo delivery, as well as reconnaissance and bombardment from a height. Their real flourishing came in the years of the First World War, but the 6 disaster of May 1937 of the German airship Hindenburg actually put an end to the development of these technologies.


At the same time, the idea of ​​developing a new generation of helium airships, which could not catch fire the way it did with the Hindenburg, appeared a long time ago, although the next large-scale attempt to rehabilitate airships by the US military seems to have failed. According to the publication The Defense News, starting from 2007 and 2012, the Pentagon spent the year on the development of various airships 7 billion dollars. At the same time, technical failures and reductions in the defense budget show us that the task of developing new airships was not so easy to cope with even with a substantial amount of funding.

One of the largest US failures was the LEMV military airship, the Long Endurance Multi-intelligence Vehicle, which was commissioned by the American ground forces. It was assumed that this airship will become the main means of reconnaissance for the US military, as well as a universal means of communication. The project was launched in 2010, with an eye to the fact that after 1,5, the first LEMV airships could be used in Afghanistan. 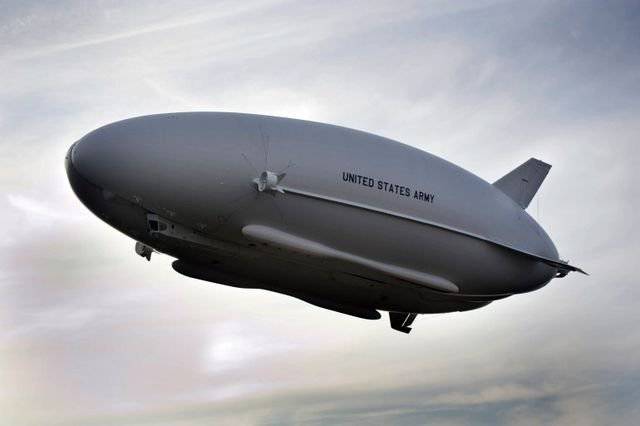 Lemv
The development of a military airship LEMV was engaged in the famous company Northrop Grumman. The airship even managed to make its first test flight, which indicates the achievement of some success in the implementation of this program. According to available information, it was assumed that the LEMV airship could be at 21 days at an altitude of approximately 6 kilometers above sea level. All this was supposed to lead to significant savings. Each departure of aircraft for reconnaissance costs the American taxpayers 10-30 thousands of dollars, while the airship could be in the sky during 21 day for the same money.

However, at the implementation stage, the project encountered technical difficulties. Northrop Grumman's specialists failed to make the LEMV airship as light as it was originally intended. For this reason, as well as due to gas leaks through its envelope, the airship can really stay no more than 5-6 days in the sky, and this despite years of hard work and huge investments: according to various sources, the project was spent on 356 to 517 million dollars. The LEMV development program has been discontinued. At the same time, the military sold the apparatus already produced, which participated in the test flights, back to the manufacturer. The unit cost Northrop Grumman a 301 thousand dollars. Compare this amount with the cost of this project.

The cancellation of work on the LEMV project was already the third unsuccessful attempt by the US military to revive military airships. In 2012, the development program for the interests of the US Navy airship MZ-3A was frozen, and at the very beginning of 2013, another project disappeared from the US Air Force budget - the TCOM Blue Devil 2 airship. The last airship, the creation of which was spent 115 million dollars, could not even rise into the air due to the preponderance. Funding for the Blue Devil 2 project was halted in June 2012.

According to the project, the Blue Devil II airship was an aircraft with a payload capacity of 1,13 tons. The development of this model of the airship involved the company MAV6, with which the Pentagon entered into a contract in October 2010. The formal reason for the completion of the financing of the project was the protracted process of developing the apparatus. The airship was supposed to begin the test program and combat use in Afghanistan in February 2012, but could not even make the first flight. In addition, the cost of the project has increased almost 2 times. Initially, the US military planned to spend on its creation the amount of 86 million dollars. 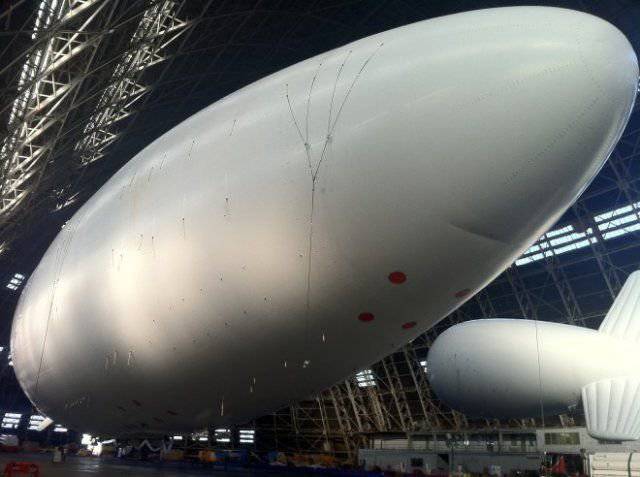 Blue devil ii
However, this project is not so bad. Blue Devil II was to be the 2 airship, which was created as part of the Blue Devil project. Its closest relative - Blue Devil I, distinguished by its smaller size and, accordingly, carrying capacity, is used by the American army in Afghanistan. The airship is used to monitor the terrain and conduct reconnaissance, and also plays the role of means of electronic intelligence.

The work on the development of the HALE-D high-altitude airship, which was created for the needs of the American missile defense system, ended in failure. It was assumed that this airship can be placed at an altitude of about 18 thousands of meters above sea level. He had to solve the problem of coordinating the launch of missiles of the missile defense system. But during the execution of its first flight in 2011, the airship just crashed. As a result of the crash of the airship, no one died, but the fall of the car on the trees brought down its solar panels, which were the main “chip” of the project.

The airship HALE-D was an unmanned aerial vehicle that was controlled from the ground. He could for a long time be at a height of thousands of meters 18,5, while the equipment installed on the airship was powered by solar panels, which were installed in its upper part. According to the creators, the airship HALE-D could fly above the turbojet aircraft, and also hang at one point for a long time. To do this, there are special motors on it, with which he can constantly adjust his position. This allows the device to freely observe an area of ​​approximately 1000 square. kilometers, playing the role of a means of warning of a rocket attack, carrying out the seizure of targets, watching the terrain, doing exploration and monitoring of nature and solving other problems. 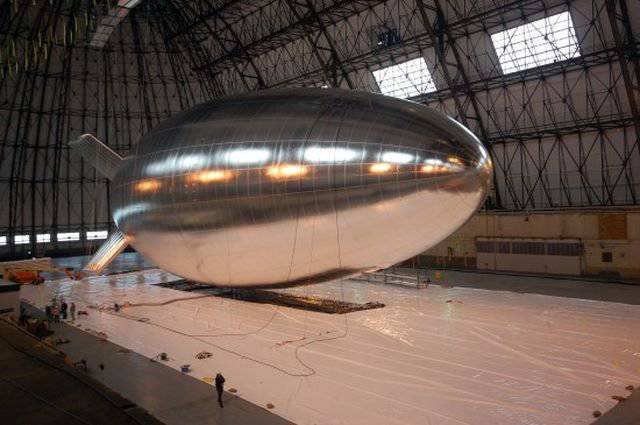 HALE-D
Reducing the amount of budget funding may also affect the project of the promising airship Aeroscraft (Aeroscraft) - a prototype of a new generation airship capable of lifting cargo weighing up to 66 tons into the air. For the first time, its prototype rose to the sky in January of this year, but the future of the project today is questionable. Initially, the project was planned to be financed with funds from the Walrus HULA pilot project, which was supervised by DARPA. But this project was stopped in 2010 year. After that, the creators of the airship Aeroscraft were forced to seek private investors.

It is worth noting that private investors are not yet eager to invest their own money in the project of airships of a new generation. The most risky from this point of view are the projects to create military airships. However, it is premature to write off these aircraft from the accounts: the emergence of new technologies and the potential reduction in the cost of helium production may allow the design of sufficiently effective airships of a new generation that can extend the data age of aircraft.

Ctrl Enter
Noticed oshЫbku Highlight text and press. Ctrl + Enter
We are
Airships are not peaceful skyRussian airships up to 1917 year
28 comments
Information
Dear reader, to leave comments on the publication, you must to register.