On the issue of "unpretentiousness" ... "Show" continues 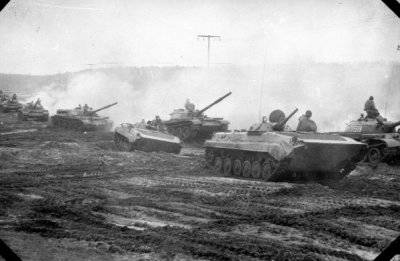 This is not to say that my previous article caused a flurry of discussions, but once again for me clearly showed that people who are not indifferent to stories tank Soviet troops are missing.


So. GSVG was preparing to defend their homeland - the USSR - in good faith. Classes, training, exercises - everything went on as usual. And my regiment very often “visited” at the Vuynsdorf training ground, practicing many tasks there, and we usually stayed there for a month and a half every six months.

We moved there and back to the RPD by the “railways” of the GDR. For which each time it was necessary to carry out the loading of tanks on railway platforms. And if at the test site it was done grandly and beautifully, then on the way back ... the “show” began. And every time. I will tell about the first thing I saw: the first impressions are brighter, and at that time I was still more “a spectator”, because only “old men” went to the “battle”, and the “youth” studied ...

The main characters of the "show" were faulty tanks, and there were enough of them each time. The worst was when the T64 turned into a “pillbox”, that is, the engine refused, and for various reasons it was not possible to replace it with a landfill. And there were two such cars at that time ... My platoon, thank God, did not suffer this fate, but an oil leak appeared on 157, one of the oil lines began to “ooze”, and in order to change it, it was necessary to remove the engine. Zampotekh battalion looked and decided that, of course, bad, but he will live to "home".

As a result, I turned out to be a senior column of “invalids”, that is, I was given the task to go out at the head of a column of four “defective” machines before the general column of the battalion and bring it to the loading waiting area. While I was collecting my "defective", two hitches with non-propelling tanks passed by me, straining with engines, and they went even earlier. The “collection” was interesting for me, two tanks opened for oil leaking, one was heated desperately, and the last one was the most interesting: it turned left only on even gears, to the right - on odd ones. He became my “commander”. Basically, my “invalid team” passed four kilometers to the district without any special “shocks”, the main thing was that they did not break the firewood, literally ... There I dispersed the cars and waited for the loading. I had free time, so I decided to look around. The station did not cause me special attention, we had bigger stations, and here we had two ways and one access road with a side and end ramp. The village was also small, twenty houses, but all are well maintained and clean. The largest building was a dairy, where my soldiers, who had not been here for the first time, “stitched”, bringing from there two filled with milk to the top of the AT-1 box, “friendship - Freundschaft” in action ...

Half an hour before the start of loading, when a suitable battalion column was already visible, the shunting diesel locomotive filed the platforms for loading. And then I began to notice that on the other side of the "glands" "local" began to gather, somehow even was surprised: that they did not see the tanks? But then it went. Company columns clearly approached the area and stopped. The crews were divided, the commanders and mechanics remained with the tanks, and the gunners of the guns, under the control of the vice-technologists, ran to the platforms and quickly began to lower and fix the sides, preparing the platforms for loading the tanks. And, what surprised me, having a narrower gauge, the German platforms made it possible to load two tanks on themselves, in the Union they were not “greedy”, one tank - one platform ...

Well, everything is ready, a short construction, bringing the order of loading and the distribution of "warm things", and started ... First came the combat-ready machines and "my" "disabled". And when he began to “remove” them from the parking lot, he suddenly noticed that after one of them a rather large oil stain remained on the ground, and there was a path along which some German was walking at that moment, he carefully looked at our tanks. , and it was obvious that he was interested and pleased. Noticing the oil stain, he drew my eyes with a shout and pointed to the stain and began to repeat “Kaput?”, “Kaput?” I studied English at school and at school, but I knew the meaning of this word well, so he tried to say understood. Well, let's not drop our Soviet pride, we had to make him a soothing gesture, and lifting a finger to the top to answer “Gut!” To which he heard in reply “Gut!?!?!?” And saw huge surprised eyes. Apparently, I have inflicted a serious psychological trauma on a person, eroding the boundaries of the notions of “good and bad” in the technical state of “panzers” ...

Well, the overwhelming mass of tanks plunged, the setting on the "mountain" brake and the locking of the turrets and cannons were checked, and the cannons were additionally fixed with cables. Four tanks, two "dead" and two "living" and BTS remained on the ramp, on the front sheet of which, the soldiers from the repair company had already fixed the drive wheel of the tank with a cable. And the main "presentation" began. The “dead” car was hooked on the front and back with a cross to the tank and the BTS and began to be pulled onto the platform. Sometimes it seemed that it seemed to hang in the air on the stretching of cables, but everything was done very carefully, slowly, but clearly. Here the tugboat moved from the extreme platform to the one you need, so the dead one crawled behind it. So quietly and neatly it is reached to the right place on the platform, then it is uncoupled from the front tank, and the BTS quietly draws it back. Then, after installing a pair of BTS spurs, the drive wheel fixed on the armor gently rests against the stern and pushes it forward, until the “Stop” signal. Here is another pair of spurs secured, and the BTS is fed back, dragging the tank along, again “Stop”, everything, the tank is submerged. The cables are unhooked, and the BTS famously goes to the side ramp, freeing up space for the next hitch ... Everything repeats itself again, with one exception, the BTS does not go anywhere, but also fastens on the platform. It is worth adding that all this is plentifully flavored with “running”, with a bunch of shouts of which only mate is well distinguished, and an unforgettable army entourage. And most importantly - a whole crowd of spectators, I never thought that so many people could live in two dozen two-story houses, apparently, people from other places also came to the dairy plant, there really were a lot of them. To my question: “What are they doing?” The company replied: “Yes, don't feed the Germans with bread, let me see the military equipment, and what else can they do, but here is such entertainment ...”

I decided to continue my story about the service on the T64, but not with the aim of denigrating this car, since it is dear to me as my first tank, but with the task to show that service in the tank forces is not a simple matter, and, in particular, for often having to quickly resolve issues that life puts before you. But, by the way, everything is like everywhere else, but with a “tank” bias.

Now, while printing these articles, I seem to have understood the full depth of the “design” of the appearance of the T72 tank. The T64 is a good and very interesting machine, by the way, made at a very high level, which you immediately understand when you get to know, for example, the T72, this is where minimalism is at the forefront, everything is simple, practical, without frills. But, alas, this machine was indeed very much ahead of its time, and the transition from such “dinosaurs” as Т55 and Т62 could not pass just like that, although by the time I started my service, of course, many issues have already been resolved, but ... but ... A lot of soldiers came to us from the countryside, where they worked on a much simpler and less fastidious technique, where the very fact of using water for the bay, almost from a puddle, is quite a usual and permissible business, but the "sixty-four" this did not forgive. "Two-stroke" diesel engine is very much "extreme." It is very heat-loaded and very high-speed, which, of course, is good for creating an engine with record figures, but in reality, the zone of optimal modes is very narrow, and the way out of it leads to engine breakdowns.

As a result, if a military conflict had arisen and the recruiters who had previously served on “dinosaurs” would have been called into the tank forces, this would have led to a massive exit of equipment from technical faults. Т72 was and is more understandable for people who served on Т55, Т62 - “mobilization” - it is “mobilization”

Yes, and we had “conditionally” new cars, many of them already had marks on their overhauls on their armor. And if the purely “Kharkiv women’s” attitude was still good, then the attitude to the machines, which had been in the “capable” hands of the soldiers-repairmen of the Kekhmeyzer plant, was ... well, there are no such printed words. That, in principle, I put in a minus to the designers, although, of course, the designers tried to eliminate the identified “errors” very much, T64A and T64B in many ways very different machines, and in terms of reliability, a lot was done. I was “lucky enough” to serve on T64, so believe it or not.

Ctrl Enter
Noticed oshЫbku Highlight text and press. Ctrl + Enter
We are
Iron fist of the Red Army. Motorized and tank divisionsHeavy tanks of the USSR in the postwar period
55 comments
Information
Dear reader, to leave comments on the publication, you must to register.