November 13 2013
9
On October 22, 1922, one of the oldest design bureaus in Russia and the world was formed, which today is called OKB im. Tupolev. It was Andrei Nikolaevich Tupolev who created and for many years headed this design bureau, which gave the world a huge number of models, both military and civil aviation. Tupolev aircraft, such as Tu-134, 154, 204, for many years have been and continue to make up a significant part of the domestic civil fleet. And the Tu-95 and Tu-160 strategic bombers are currently one of the components of the Russian nuclear triad.


The development of Tu-16 and Tu-95 bombers is the undoubted success of the Design Bureau, which is recognized worldwide. These aircraft, created in the 50 of the last century, largely determined the parity of our country with the United States during the Cold War. Both cars turned out to be very successful and proved to be like enviable long-livers. The Tu-16 was built in a series that exceeded 1500 machines, the series consisted of several dozen modifications, some of which successfully carried their service in the country's Air Force until the beginning of the 1990-s. Tu-95 also has many modifications. Moreover, his latest modification of the strategic bomber-missile carrier Tu-95MS and the long-range anti-submarine aircraft Tu-142М3 are still in service with the Russian Air Force and have significant modernization potential.

The second half of the 40s of the 20th century for the Soviet aircraft industry was marked by the solution of the 2's main problems: the development and introduction into operation of new combat vehicles equipped with turbojet engines, as well as the development of a strategic bomber that was to become the carrier of a nuclear weapons. This aircraft was guaranteed to destroy objects located in Asia and Europe. In the future, the Soviet Air Force should have received an aircraft that could deliver a nuclear charge to the territory of the main enemy in the Cold War, the United States from air bases located in our country.

Moving along this rather logical path, the designers under the leadership of Tupolev at the 1 stage were able to build and pass on to tests the military Tu-80 - an experienced long-range bomber, which, in fact, became a deep modernization of the Tu-4. At the same time, the Design Bureau managed to increase the estimated range of the new machine by 25-30% compared to the original. After that, the Tupolev Design Bureau took up the project of a new intercontinental strategic bomber, which received the Tu-85 index. In 1951, even the first prototype aircraft of this project were assembled on 2, and a full-scale factory test program was carried out. The planes even planned to release a rather large series, but it never came to that. At the beginning of the 1950-ies, jet propulsion systems began to become more and more common, and they became familiar not only for fighter aircraft, but also for bombers. It was decided to abandon the development of the Tu-85 project in favor of similar in terms of tasks, but more advanced machines equipped with turboprop and turbojet engines - in the USSR these were Tu-95 and M-4 aircraft, and in the USA - no less famous B-52. 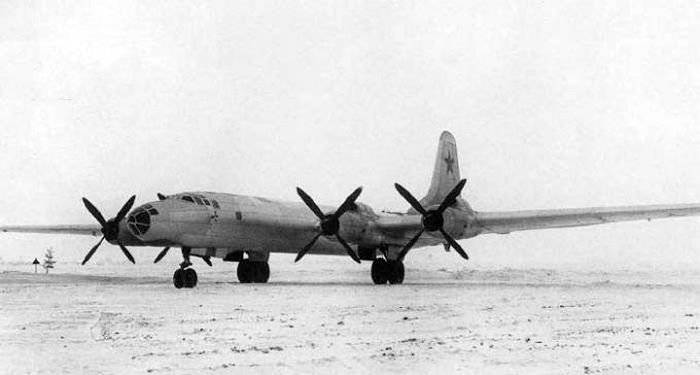 Tu-85
At the same time, working on a Tu-85 bomber in the OKB Design Bureau. At the beginning of the 1950-s, Tupolev worked out the option of building a number of developments of the basic configuration on its basis, including machines that differed significantly from the original design. One of these aircraft was the project "504" - a project of a unique intercontinental flying bomber boat. The design work on this machine was carried out from 1950 to 1953 for a year by specialists of the Project Design Bureau Project XB NUMX Brigade, as well as TsAGI. The design bureau was headed by B. M. Kondorsky, G. A. Cheremukhin and V. A. Sterlin also worked on the project (who later became the leading aerodynamics of the Tupolev Design Bureau). The digital designation of the 156 project was internal to the Design Bureau and deciphered quite simply - it was the 504 project of the year 4.

The reasons why Soviet designers decided to turn to the idea of ​​creating an intercontinental flying bomber boat were quite prosaic. At the end of 40, the beginning of 50, of the last century, intercontinental strategic bombers had a very limited combat radius of action - around 5-6 thousands of kilometers, these numbers were clearly not enough to ensure the destruction of targets in the United States, especially given the route maneuver and resistance Enemy air defense. This problem could be solved by organizing the refueling of aircraft during the flight. But at the same time there were serious difficulties with the organization of refueling aircraft during their return from the mission. Tactical and technical constraints of that time played a role: high complexity of accurate bomber and tanker aircraft to the refueling zone, given the lack of necessary navigation equipment and high crew fatigue after a sufficiently long flight and solving a combat mission. All this led Soviet designers and military analysts to the idea of ​​using special tanker submarines to refuel bomber planes, which would have previously been deployed in the waters of the Atlantic and Pacific Ocean.

In the role of the strike component for the new system, it was decided to use a flying intercontinental boat, the project of which was created using the main components and assemblies of the intercontinental strategic bomber already created, in particular, the Tupolev bomber of the 85 project. In the course of the design, Soviet designers were faced with the question of comparing the capabilities of the marine and land versions of the Tu-85 bomber.

The project to create a huge flying boat-bomber was the first work of the design bureau to design a seaplane after the 15-year break, the last work in this direction was MTB-2 or ANT-44. Because of this, by the beginning of the work on the project of a new flying boat, a very large practical and scientific-theoretical failure had arisen, which had to be closed before starting work on the project. Therefore, in the TsAGI and the Brigade projects, a very scrupulous study of foreign experience in the creation of heavy flying boats has been initiated, drawing on all the information on this subject that has already been accumulated in the Soviet aircraft industry on this issue.

In order to correctly assess the aerodynamic characteristics of the future seaplane on models in the TsAGI T-102 pipe, tests of the relationship between the geometric shapes of the aircraft body were carried out, and physical interpretations of these dependencies were found. For example, in practice it was proved that the carrying capacity of the bottom of a flying boat (due to the cheekbones) is 2 times larger than that of an ordinary fuselage. That the resistance of the redan does not depend on the angle of attack in any way, that the interference of the bottom and the wing almost does not depend in any way on the distance between them, that the shape of the redan in the plan does not affect the decrease in resistance. All these dependencies established during the tests, together with the study of the requirements of hydrodynamics, made it possible, together with TsAGI, to create a design of the hull of a flying boat that met the requirements of hydrodynamics and aerodynamics.

Estimated performance of the 504 object

Conducting the design work convinced the creators that the Tu-85 equipped with ASH-2K engines would be the best for the role of a flying boat, which was eventually chosen as the basis for the work. Experimental calculations that were based on hydrodynamic tests of the ANT-44 model and foreign materials on the hydrodynamics and aerodynamics of flying boats designed in 1930-40-ies showed that the intercontinental flying boat with power plants and an 85 aircraft wing could to reach the desired bomb load and flight range, but will not be able to reach the required flight speed, as the 85 project bomber itself, which is distinguished by a significantly better aer single dynamics

A more realistic maximum flight speed over the target would be 580 km / h. The maximum take-off weight of the aircraft could be 104 000 kg, with such a mass, the length of the takeoff would be 4000 meters, and the range could be increased to 10 000 km. With a weight of 90 000 kg, the run-up of the aircraft was significantly reduced - to 2300 meters. Also, the designers worked on the 2 different versions, which differed in the installation of wing floats: in the 1 version, the floats, which in their design repeated the ANT-44 floats, were mounted on wing consoles and were non-retractable. In the second case, the floats were planned to turn in flight along the wing span, they took their place at the wing tips. 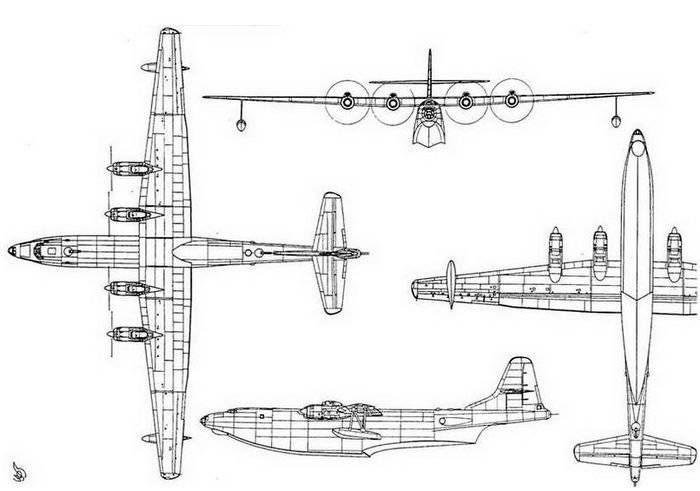 The first version of the flying boat project 504 should have the following geometrical characteristics: aircraft length - 44 m., Height - 12 m., Wingspan - 56 m. More detailed information about this project can not be found today in open sources. It should be noted that although the design work on the creation of this aircraft was stopped in the 1953 year, after tests began on a prototype Tu-95 aircraft able to fly to the United States without problems, the developments gained from the project and the results of research were widely used in the construction of flying boats 10 and Be-12.

Ctrl Enter
Noticed oshЫbku Highlight text and press. Ctrl + Enter
We are
In the shadow of TupolevThe difficult fate of the Tu-160 (part of 2)
9 comments
Information
Dear reader, to leave comments on the publication, you must to register.