November 12 2013
5
In the early sixties, the command of the airborne troops demanded that industry create a specialized combat vehicle. The assault vehicle (BMD) was supposed to have high mobility and powerful armament. At the same time, the main quality of the promising technology was the possibility of transporting and landing from existing military transport aircraft. 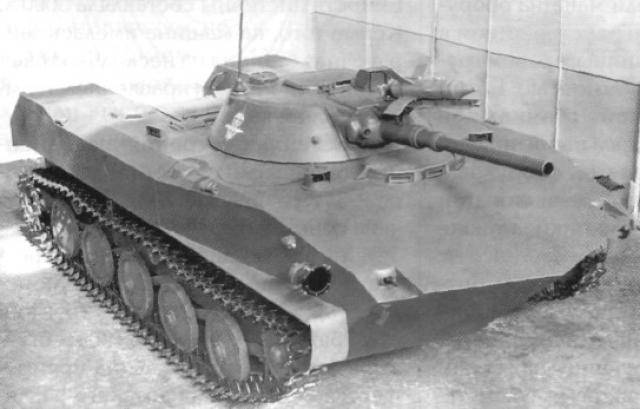 At the stage of forming requirements for a new combat vehicle, doubts were often expressed about the very possibility of creating equipment with similar capabilities and minimal dimensions. However, the commander of the Airborne Forces, Colonel-General V.F. Margelov was able to convince the opponents of the project of its necessity. According to the final requirements, the new BMD should have characteristics at the level of the infantry fighting vehicle BMP-1. The capabilities of the An-12 aircraft affected the requirements for the size and weight of the machine. Thus, the combat weight of the BMD with a parachute system should not exceed 12 tons.

Several enterprises, including the Volgograd Tractor Plant, were engaged in research on the prospective BMD. In 1964, Volgograd engineers completed work on two versions of a draft design of a combat vehicle. Both options were developed in the framework of the same project "Object 915" and therefore had several common features. In two versions of the project provided for the use of the same engine, as well as similar layout solutions.

In two draft designs it was proposed to place the combat compartment in the middle part of the armored hull, and the engine-transmission compartment - in the stern. The differences in the layout was in the accommodation of the crew and landing force. In the first version of the project, three paratroopers were located in the front of the hull and could use machine gun installations. Behind the places of three paratroopers placed the combat compartment, in which it was supposed to equip the jobs of the driver and commander-gunner. Since the driver's seat was moved to a rotating tower, it was equipped with a special turning mechanism designed to maintain position regardless of the angle of rotation of the tower. Similar mechanisms have been developed for some previous light armored vehicles projects. For the fighting compartment managed to put two more seats for paratroopers. For landing and landing troops could use the hatches in the roof and stern of the hull. 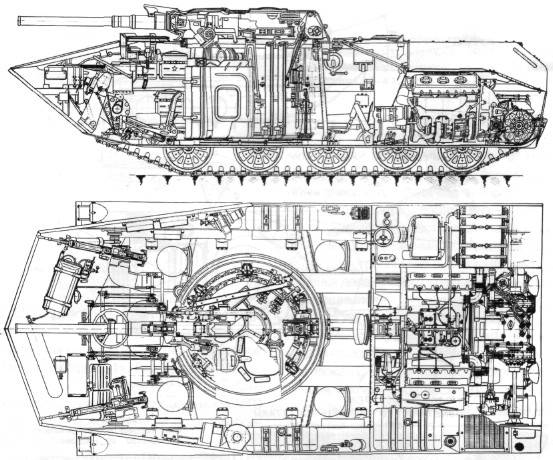 The second version of the 915 Object project was less bold with respect to the ideas applied. The workplace of the driver was placed in the bow of the hull. To his left, provided for the seat of the commander, to the right - the paratrooper. The commander and paratrooper possessed machine gun installations. As a set of weapons of the second version of the BMD used a tower borrowed from the BMP-1. Between the combat and the engine compartment placed three seats for paratroopers. The set of hatches in the hull corresponded to the first version.

According to the results of the comparison of the two options, the first was recognized as the most profitable. In April, 1964 of the year was assembled a model of a promising BMD "Object 915" of the first option, in which the driver was located in the fighting compartment. Despite the relative complexity of such an arrangement of the driver’s workplace, at that time it was considered as a convenient and promising technical solution. In this case, the driver had to follow the road through periscope observation devices located on the roof of the tower. This had a positive effect on the survey when driving both on land and on water. Nevertheless, certain problems of a psychological nature were identified: getting used to working in a rotating tower could cause great difficulties. 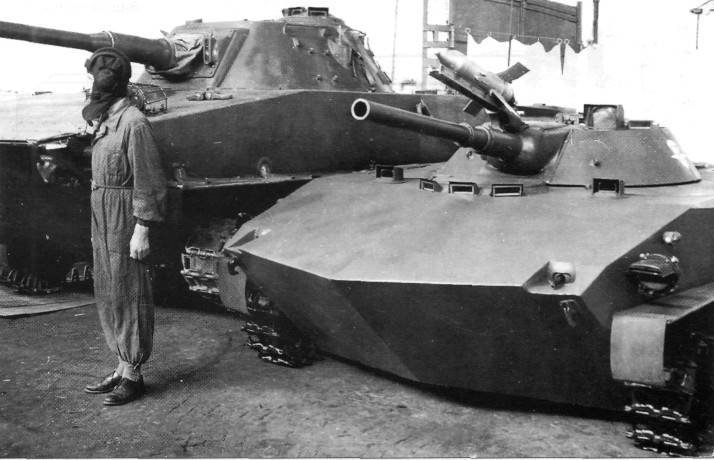 The construction of the layout allowed us to determine the pros and cons of the new layout, and then modify it. In the future, the development of the project "Object 915" was carried out through the development of the first draft design. Thus, in the technical project, the building of the promising BMD was divided into three compartments. In the front of the vehicle, there were three seats for the landing, three machine gun installations with PKT machine guns, batteries, shelves for ammunition boxes and parts of spare parts. A combat compartment with a rotating turret was located in the middle part of the corps. To the left of the weapons in the tower placed a turntable with the workplace of the driver. To monitor the situation on the platform provided a small turret with devices TNPO-170. One of them could be replaced with a TVM-26 night vision device. To the right of the armament, a commander's seat and a set of sighting equipment were placed in the turret. Commander’s viewing instruments were similar to those of the driver. In the same place, to the right of the armament, we provided a place for the ammunition of the gun, the machine gun, and the missile system.

Immediately behind the fighting compartment, in front of the engine bulkhead, there were two seats for paratroopers and racks for ammunition. Near the places of the paratrooper were ball installations for firing from machine guns. For the landing and landing of paratroopers in the stern sheet of the fighting compartment there should have been a relatively large hatch. In the manhole cover also provided an observation device and a ball machine for firing from a machine gun.

In the rear part of the hull UTD-20А diesel engine with 250 hp power was placed. It is noteworthy that the engine for the "Object 915" had less power in comparison with the base UTD-20, applied on the BMP-1. A promising airborne assault vehicle turned out to be almost twice as light as an infantry vehicle, which made it possible to select an engine of lower power. 250-strong diesel UTD-20А provided the optimum ratio of power density and fuel consumption. Inside the case, it was possible to place several fuel tanks with a total capacity of 400 liters. Estimated power reserve reached 500 kilometers. 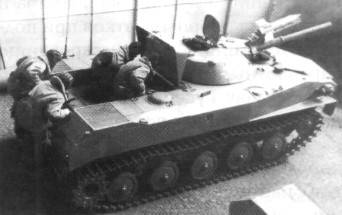 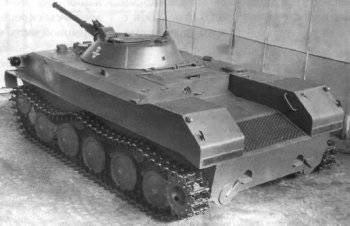 When developing an armored hull for the BMD “Object 915”, Volgograd designers applied the results obtained during the design of the experimental amphibious tank “Object М906”. It was supposed to make extensive use of aluminum alloys, which made it possible to reduce the mass of the armored hull to 1,5 tons. A steel case with a similar level of protection turned out to be heavier on the 500-550 kg. Frontal details of the hull and turret of the new assault vehicle provided protection against bullets of caliber 14,5 mm when shooting from any distance. The board defended the crew and units from 7,62-mm bullets at a distance of 400 m. An interesting fact is that simultaneously with the aluminum hull steel was developed. With a mass of about 2,5 tons, it provided a greater level of protection.

Undercarriage BMD "Object 915" used an adjustable air suspension. On each of the sides of the machine there were six road wheels with air spring, hydraulic shock absorber and roller limit stop. Also, on each side of the BMD, we provided for three supporting rollers, a guide wheel with a hydraulic caterpillar tensioning system, and also a drive wheel with a pinching gear. The use of air suspension allowed us to create a system for changing the ground clearance. At the workplace, the driver provided a control panel with which he could change the clearance in the range from 100 to 450 mm and adjust the tension of the caterpillar.

In the requirements for the project was the crossing of water obstacles by swimming. The sealed hull had a good buoyancy margin (of the order of 60%), which could be used to carry additional cargo weighing about 2 tons. For movement on water in the engine compartment placed two water cannons. Calculations showed that the "Object 915" will be able to swim at speeds up to 12 km / h. 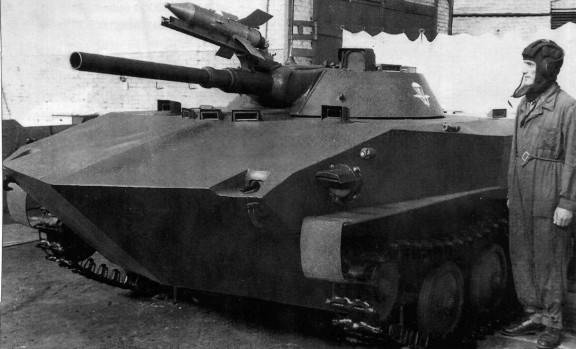 To simplify the design work, the 915 Object assault vehicle in the first version of the project was equipped with a turret designed for the 911B Object light tank. As a result, the smooth-bore 2А28 "Thunder" caliber 73 mm became the main armament of the new BMD. In one installation with a gun it was supposed to mount a PKT machine gun. On the roof of the tower provided for the launcher anti-tank missiles complex 9М14 "Baby". Thus, the armament complex of a promising assault vehicle fully satisfied the customer’s requirements regarding unification weapons with BMP-1. For targeting guns and machine guns, the commander could use the combined PKB-62 sights (day and night). Vertical pickup angles ranged from -3 ° to + 20 °.

Three machine guns, placed in the front of the case, were equipped with periscope sights and covered a wide sector of the front hemisphere. All three machine gun installations made it possible to fire in a horizontal sector of width 35 °. Permissible elevation angles range from -3 ° to + 15 °. In the BMD "Object 915" project, machine gun installations were used that were developed during the previous project of the 914 Object infantry fighting vehicle.

The 2А28 gun ammunition consisted of 40 active-jet shots, 27 of which were located in the mechanized installation of the automatic loader. The latter was located in the aft niche of the tower and consisted of 27 tubular containers connected in a chain. Electric crews on command of the crew brought another container to the loading line and sent a shot to the gun barrel. The remaining 13 shots were supposed to be transported in the packs of the fighting compartment. In the fighting compartment, we also managed to place machine guns on 4000, two Malyutka missiles, 10 hand grenades and a flare gun with ammunition.

At a certain stage of the project, the designers of the Volgograd Tractor Plant considered other options for the armament complex. Thus, instead of the Thunder gun, it was proposed to install two KPVT 14,5-mm machine guns and save the launcher of the missile complex. In addition, it was proposed to create a double turret with an automatic gun caliber 30 mm, which was later embodied in the project of the infantry fighting vehicle BMP-2.

The development of the first version of the 915 Object project has led to the emergence of a bold new idea. The design of this combat vehicle made it possible to create a unified chassis for military equipment for various purposes with a combat mass of no more than 10-12 tons. There is information about the creation of sketches of a light tank, command-staff and ambulance vehicles, as well as self-propelled anti-aircraft guns. At the end of 1964, the assembly of the full-scale mock-up of the second version of the BMD, developed in the framework of the 915 Object project, began.

The design of the 915 Object assault vehicle looked promising, but still some of its nuances did not suit the customer. Nevertheless, the technical design of the BMD, developed in 1964 year, determined the direction of further development of this class of technology. Based on a comparison of several projects, the Ministry of Defense selected the Volgograd Tractor Plant as the developer of a new assault vehicle. In 1965, a project was launched that retained the old designation. In the course of the new project “Object 915”, a combat vehicle was put into operation, called BMD-1.