November 12 2013
144
With regret we have to state the fact that over the past two and a half decades, our country has descended lower and lower along the steps of scientific and technological progress. In some areas, progress was initially replaced by stagnation, and then stagnation was completely replaced by frank regress. However, despite years of total underfunding and greater concern with political PR and, let's say, with daily bread, those technical segments remained that were not degraded and remained at an acceptable level. One of these segments is Russia's icebreaking fleet, which today appears to be the most impressive in the world.


Why was it specifically about the icebreaker navy? The reason is that for some time now an increasing number of states are inclined to turn their attention to the Arctic - a geostrategic region with its myriad wealth. Obviously, plans for active intervention in, say, the sharing of a large Arctic pie are impossible without the existence of ships capable of working effectively in the harsh conditions of the North. Russia has such ships. The states competing in the development of the Arctic are currently behind the level of development of icebreaking fleets from Russia. In order to keep this advantage of the Russian Federation in the future, the icebreaker group of the Russian Federation needs to be updated and supplemented, since the laying of all nuclear-powered icebreakers remaining on the move took place when the existence of such a state as the USSR on the world map. Most of the icebreakers have been maintained and upgraded. But is this enough to maintain a leading position in terms of the presence of an icebreaking fleet in the Arctic?

If we talk about the largest icebreakers that Russia has at the moment, the fleet is as follows:

Atomic icebreaker "50 Years of Victory" (project 10521). It is the largest, not only in Russia, but also in the world. The overall width of this giant is 30 meters, the maximum length is about 159,6 meters, the draft is 11 m, the power at the shafts (the energy flow directed at the shafts from the propulsion unit) is 49 MW, the propulsive power is 54 MW. Displacement - 25168 tons. The maximum ice thickness that the icebreaker is designed to cope with is 2,8. The crew is 106 people (today). Commissioned in the 2007 year JSC "Baltiysky Zavod" (laid back in 1989 year). 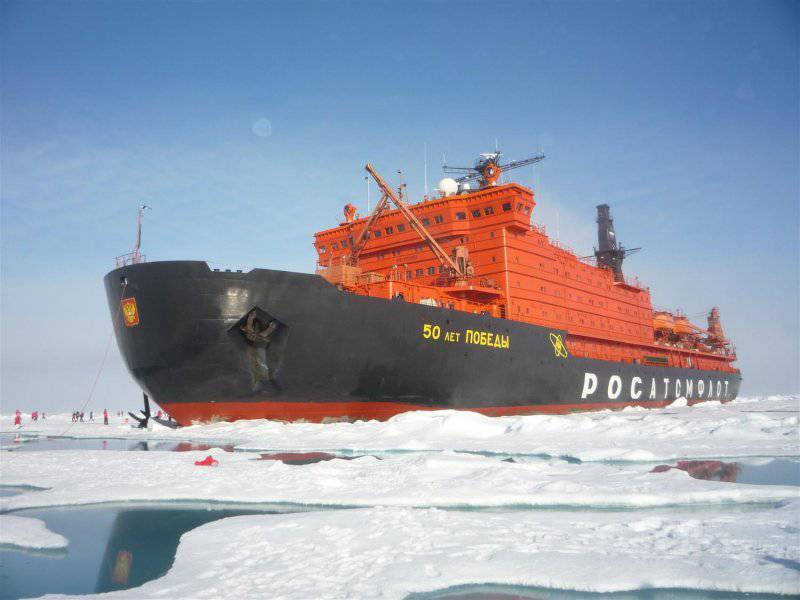 Atomic icebreaker "Vaigach". It belongs to the same project as the icebreaker Taimyr (project 10580). The bookmark took place at the same shipyard where AL "Taimyr" was laid, was put into operation in 1990 at the Baltzavod.
Until recently, icebreakers such as the “Soviet Union” (removed from the fleet in 2010 year) and “Arctic” (removed from the fleet in 2008 year) were part of the atomflot.

The grouping seems to be impressive, but to solve the tasks that are voiced by the Russian leadership today and such a grouping may not be enough. The main direction of future work is full-scale maintenance of the Northern Sea Route (NSR). So that the attractiveness of this direction of transportation of goods for foreign countries does not lose its relevance in winter (and this is a super task), we need unique icebreakers who can overcome ice jams about 3,5 m thick. It would seem that it is simply impossible to solve this problem, but it is pleasant to be aware not only of what is possible, but also that the problem is being solved now.

At the same Baltic plant (the real cradle of the Russian atomic icebreaking fleet) in January of this year, the construction of an icebreaker of a new project, LK-60Я, began. The value of 60 in the name of the project suggests that the power (on the shafts) of this more than 172-meter colossus will be 60 MW (more than the most powerful to date AL "50 years of Victory"). The designers have increased the width of the icebreaker - to 33 meters. This will allow container ships and other vessels of suitable dimensions to be carried along the Northern Sea Route, - those that today, even if desired, their owners cannot sail along the NSR - the width is large. Nuclear reactors are developed in the experimental design bureau named. Afrikantov, representing the company "Rosatom". It is noteworthy that the maximum landing of icebreakers of the project LC-XNUMHA will be 60 m - less than that of the same AL "10,5 Victory Years". This will allow such an icebreaker to bring ships close to the mouths of some Siberian rivers. The commissioning of the first icebreaker of this project (a total of such ALs will be built 50) is scheduled for 3 year. They plan to assign him the legendary name "Arctic".

This update of the icebreaker group of Russia does not stop. The plans include the construction of a real arctic monster 200-meter length and almost 40-meter width, with a displacement of more than 55,5 thousand tons, the capacity of which will almost twice exceed the capacity of the current icebreaker "50 years of Victory". This is project LK-110Я. It is he who will have to turn the Northern Sea Route into a trade route that operates year-round, since it is designed with a view to working in ice about 3,5-3,6 m thick. The development of the reactor is carried out in the above-mentioned OKBM named after Afrikantov.

By and large, Russian nuclear-powered icebreakers in the Arctic do not have much competition now, but if we also have new ships of this type with more power, then Russia can safely talk about complete technical and technological monopolization in this region. In 2008, US congressmen issued a statement about the growing influence of the Russian icebreaking fleet in the Arctic. At the same time, it was calculated that in the coming years the USA will need at least 3-s billion dollars just to start implementing its own project to create powerful nuclear-powered icebreakers capable of operating in any latitude of the Arctic. But the idea of ​​new spending at the time of a major crisis somehow did not please the majority, and the United States does not have its own full-fledged analogue of the Northern Sea Route, and therefore decided that the Russians "would then catch up and overtake". In addition, a small group of congressmen insisted that nuclear-powered icebreakers in the Arctic would soon be superfluous, for global warming, melting and everything like that ... 5 years passed - in the United States, little has changed in the implementation of icebreaking programs, and in the Arctic in winter, it still happens for minus 45 and below (on the issue of early warming and large-scale melting of ice) ...

However, Americans are far from Russia's only competitors in the Arctic. Not so long ago a Chinese icebreaker "Snow Dragon" "Strolled" along the Northern Sea Route, apparently, after analyzing how freely merchant ships from China to Europe could be carried out here. 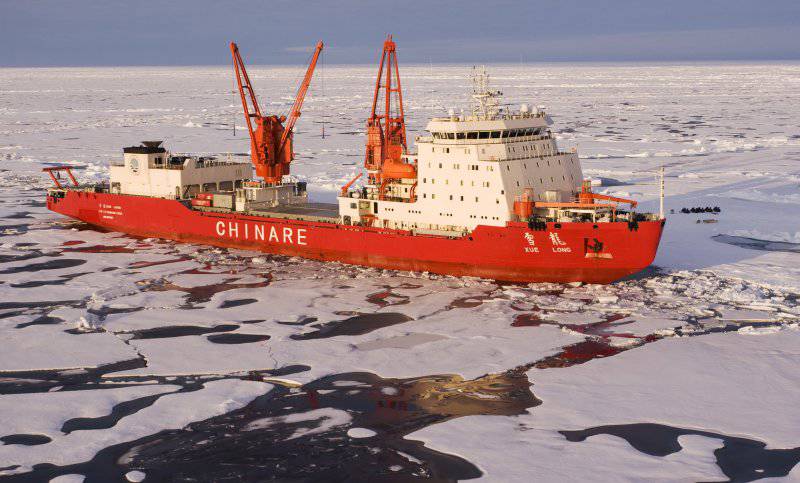 He “walked” in the summer (2012 of the year), and in the summer and in the winter the NSR is, as they say, two big differences. At the same time, the Internet began to walk a joke about how much the crew of the Russian nuclear-powered ship "50 years of Victory" will take from the Chinese, if suddenly their "Snow Dragon" does not have time to leave home before September-October ... A joke with a hint of power and dimensions of the "Dragon "...

However, jokes and jokes, and not only the Chinese started building their icebreakers. South Korea also joined the number of icebreaking powers, having built several years ago "Araon" length 110 m and a displacement of about 7 thousand tons. Not a giant of course, but already managed to be noted by the fact that the Russian trawler “Sparta” (the truth was not in the Arctic, but in the Antarctic, but still) got out of the ice captivity. 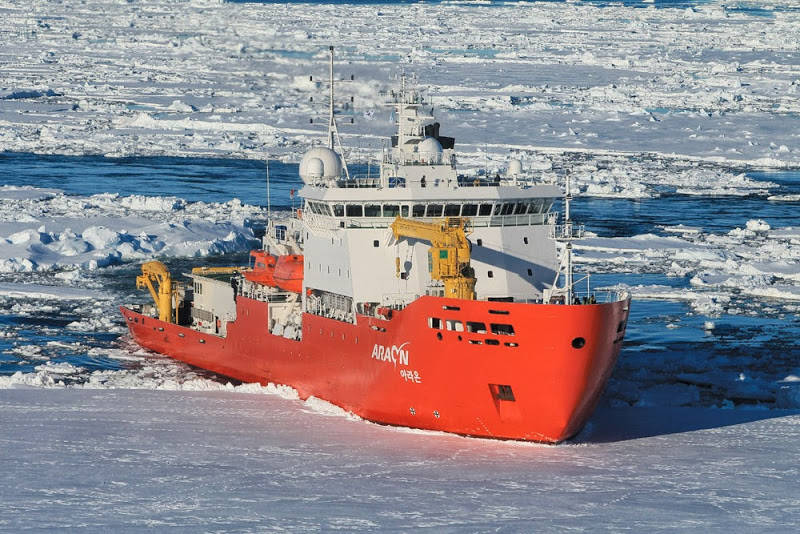 So, our superiority in terms of the work of the icebreaker fleet needs to be proved in practice, continuing to build new powerful machines capable of solving the most ambitious tasks both in the Arctic and at any point of the world’s ocean.

Infographics (from CG-WWM, USA) on icebreaking fleets of different countries of the world: 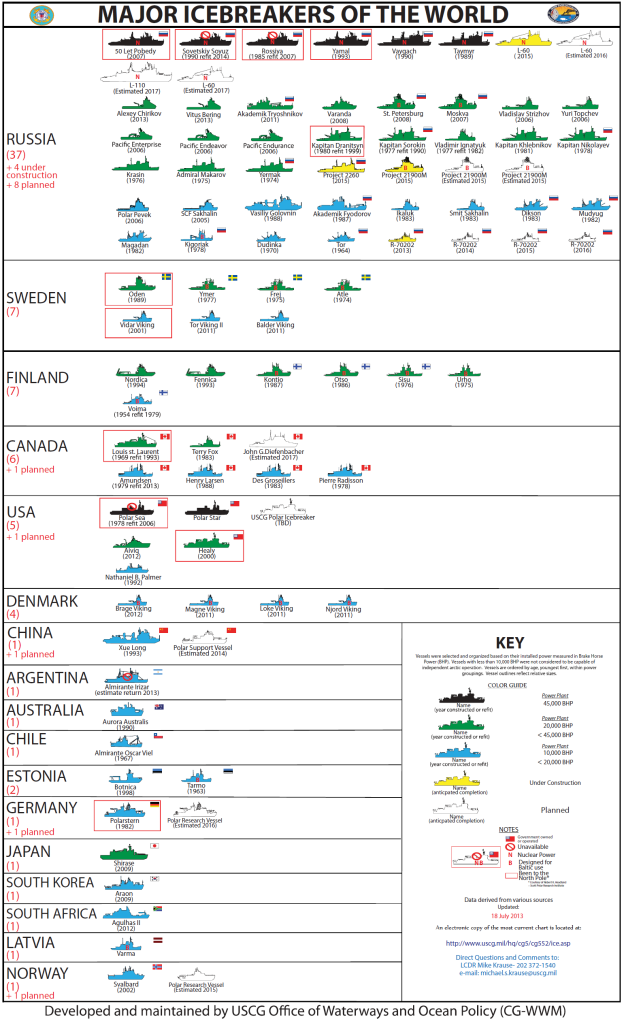 Ctrl Enter
Noticed oshЫbku Highlight text and press. Ctrl + Enter
We are
Situational analysis of the death of the MH17 flight (Malaysian Boeing 777), made on the basis of engineering analysis from 15.08.2014Results of the week. “Everything is strange and strange! Everything is wonderful and wonderful! ... "
144 comments
Information
Dear reader, to leave comments on the publication, you must to register.