November 12 2013
35
The newest aircraft carrier Gerald R. Ford was launched on November 10 at the American shipyard Newport News. Unlike the recent launch of the destroyer Zumwalt, this time the shipbuilding industry and the military held a solemn ceremony. In accordance with the traditions, a bottle of champagne was smashed against the stem of the ship. Susan Ford Blaze, daughter of the former US President Gerald Ford, after whom the ship was named, became the godmother of the new aircraft carrier. During the ceremony there were several speeches. Of particular note is the words of the commander of naval operations, Admiral J. Greenerth. According to him, the newest aircraft carrier Gerald R. Ford is a "real miracle of technology." 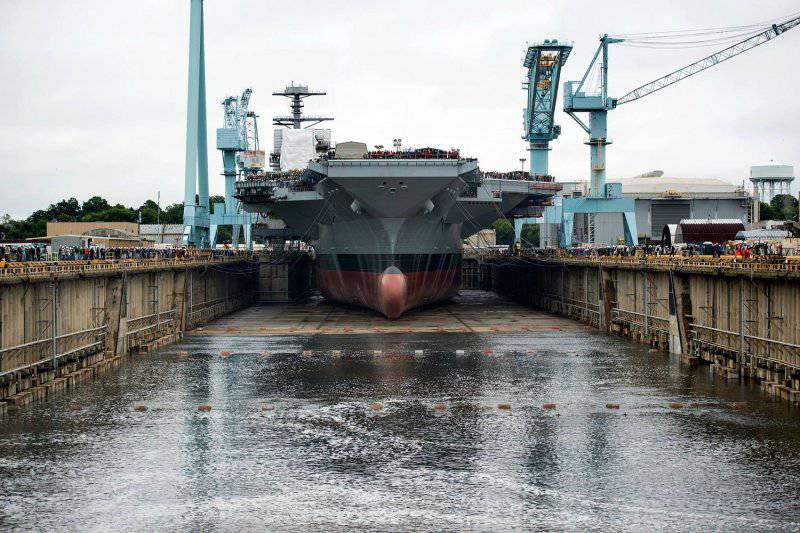 By now, according to the American media, the construction of the new ship has been completed by 70%. Now Newport News workers are preparing for the final stage of construction: the ship, moored to the extension wall, will be equipped with the remaining equipment for various purposes and armament. It is expected to spend about one and a half years on these works. Already in 2015, the aircraft carrier USS Gerald R. Ford (CVN-78) will be put to the test. Acceptance of the ship in the US Navy is scheduled for 2015 year.

Just a couple of years later, the United States naval forces will receive a new aircraft carrier, surpassing existing aircraft carriers in their characteristics and capabilities. The new project provides for the use of a number of new systems and technical solutions that significantly increase the combat potential of the ship. So, the aircraft carrier Gerald R. Ford will use two nuclear reactors A1B as the main power plant. These reactors were designed specifically for promising aircraft carriers and therefore have a number of characteristic features. First of all, it is a big power. A1B reactors have a smaller size compared to A4W (reactors used on modern ships like Nimitz), but they are 25% more powerful than them. In addition, the reactors do not require the replacement of nuclear fuel during the entire service life of the aircraft carrier - 50 years.

A powerful power plant made it possible to use EMALS electromagnetic catapults on a new aircraft carrier. These systems, in contrast to the steam, used on existing aircraft carriers, will increase the intensity of flights. Under normal conditions, the USS Gerald R. Ford will be able to provide 160 sorties a day against existing ships using electromagnetic catapults. If necessary, 120 launches are possible per day. In addition to the new catapults, the aircraft carrier is supposed to be equipped with an improved aero-finisher capable of working with existing and prospective carrier-based aircraft. 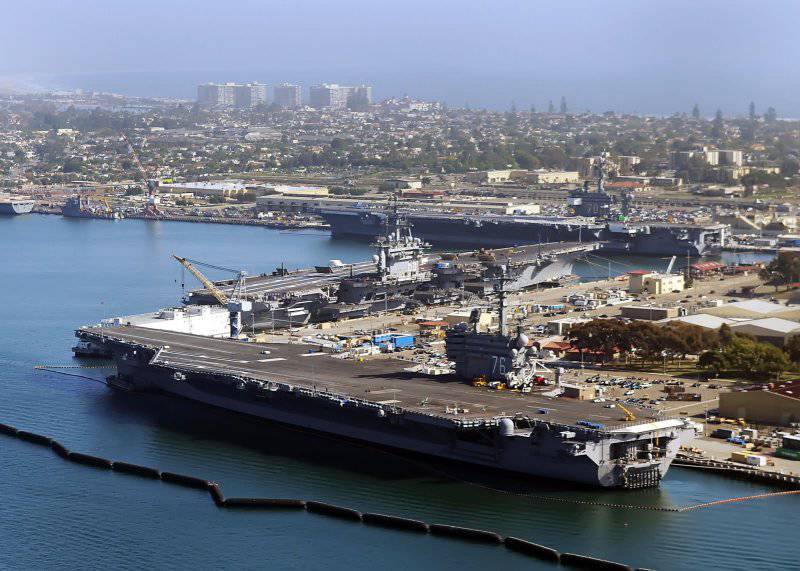 The new aircraft carrier will be able to carry up to 90 airplanes and helicopters of various types. During the first years of service, the composition of the air group will hardly differ from the composition of the groups of existing aircraft carriers. However, in the future it is planned to replace the Boeing F / A-18E / F Super Hornet fighter-bombers with the newest Lockheed Martin F-35C Lightning II. Until the end of the decade, the USS Gerald R. Ford aircraft group can be added to Northrop Grumman X-47 unmanned aerial vehicles. According to available data, some technical solutions have already been used in the design of the new aircraft carrier, which in the future will allow the use of advanced technology with remote control.

"This miracle of technology" has a corresponding price. According to various sources, 13-14 billions of dollars have been spent on the development and construction of the USS Gerald R. Ford aircraft carrier. Previously, the cost of building the first ship of the new type was estimated at no more than 8-10 billion, but the use of a number of new systems and technologies led to a significant change in the financial performance of the project. At the same time, according to the developers of the project, the mere reduction of the crew will help to achieve tangible savings. Over 50 years of service, such costs can save about 3,5-4 billion dollars. The increase in the intensity of flights should also affect the total cost of the life cycle of the ship. According to various estimates, the operation of aircraft carriers of the project “Gerald R. Ford” will cost the US budget not much more than the use of ships of the “Nimitz” type.

According to the current plans of the Pentagon, over the next few decades, American factories should build ten new aircraft carriers. Alternately entering the composition of the naval forces, they will replace the existing ships. However, for several reasons, the first such replacement will take place only in a few years. The new aircraft carrier USS Gerald R. Ford (CVN-78) is considered a replacement for the USS Enterprise (CVN-65). However, the latter was written off in December 2012 of the year, and “Gerald R. Ford” will be delivered to the customer no earlier than 2015 of the year. 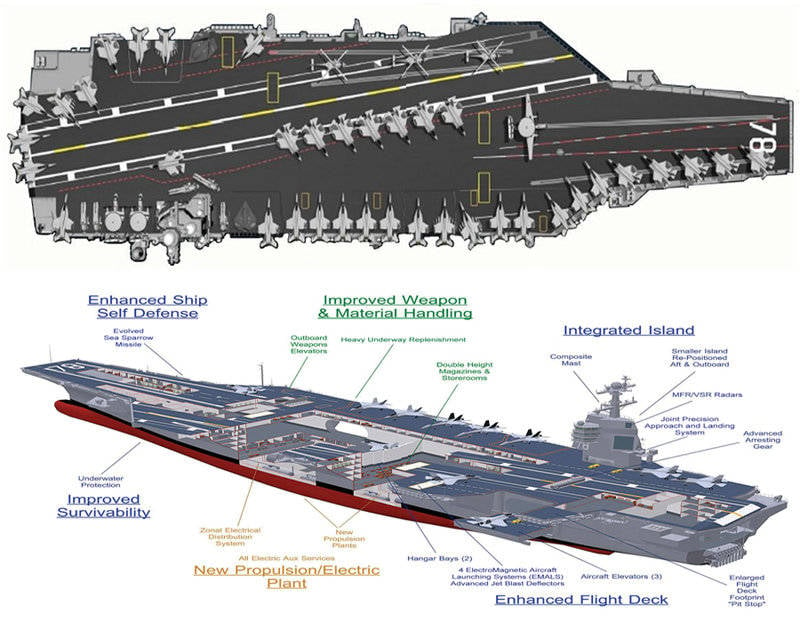 It should be noted that several aspects of the new project are being criticized. Claims are caused by excessive project costs, insufficient growth of combat effectiveness, etc. features aircraft carriers project Gerald R. Ford. Nevertheless, plans for the construction of new ships with the air group in recent years have undergone only minor changes. The Pentagon does not intend to abandon its plans, but it intends in the future to switch to using 10 aircraft carriers instead of 11. Such an approach is expected to reduce costs without a loss in defense capability. 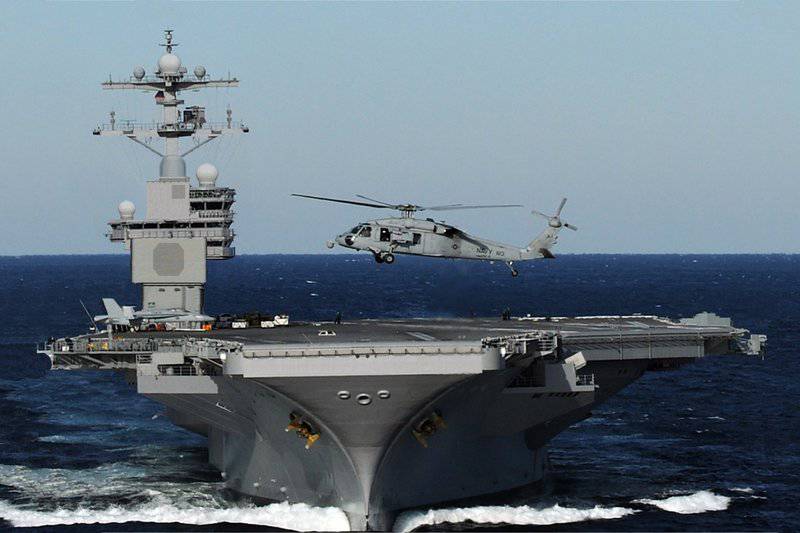