November 12 2013
109
Last week, quiet and measured, with planned manifestations of Russophobia and a no less planned desire to exchange armor for the euro, the life of the Latvian authorities was broken by a chess player. This chess player is Garry Kasparov (nee Harry Weinstein) is the 13 world chess champion. Having made a knight's move, Harry Kimovich decided to send a letter to the Latvian authorities asking official Riga to grant him Latvian citizenship. The letter was sent to several factions of the Latvian Sejm and brought parliamentarians into considerable confusion. The fact is that Kasparov asked for Latvian citizenship for him, quotation: “special services to the Latvian state”.


Parliamentarians pondered (think, by the way, still) about the merits of what Garry Kimovich distinguished himself in front of the Republic of Latvia. They began to figure out how to move with their brains and lips: with the Kremlin on knives - yes, I played chess in Riga - yes, too, wrote a letter in Latvian - ya ... It seems that there is merit to the Latvian state ... But still, Latvian deputies are tormented by vague doubts about the fact that this is now enough to get a Latvian passport. By the way, it is necessary to mention also the fact that Garry Kasparov is not going to say goodbye to Russian citizenship either, watching out for himself “just in case of fire” the “safe haven”. 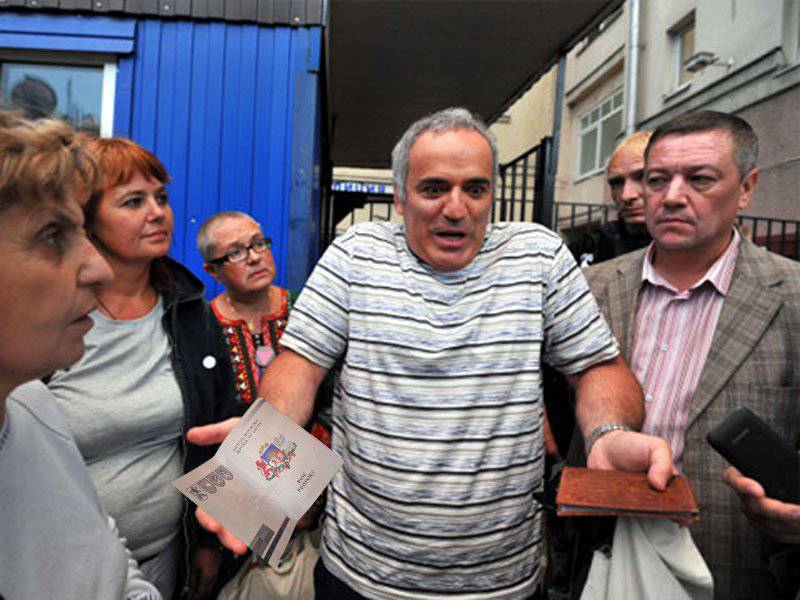 "Fire case" manifested itself in the summer of this (2013 year), when Harry Kimovich summoned a few gentle words to the Investigation Committee. In what format they called, for answers to which questions they didn’t extend (they say, they could not resist the rally and bit the policeman ...), but such a challenge made the chess player, who, incidentally, said that he had “tied up” with a chess career, give strekacha. Donkey Harry Kimovich was in Latvia, where a few months later he decided to get a Latvian passport.

But after all, in order to obtain citizenship, it was also necessary to substantiate your choice - this is one time, and it is extremely necessary for a person to present the arguments that the second citizenship is two. Garry Kimovich didn’t spread about the interest in his person from the side of the RF IC, having come up with an explanation of a different nature. We give these explanations from the letter of Kasparov to the Latvian deputies:

As a citizen of Latvia, I will get the opportunity to engage in political activities in the name of democracy, peace and justice both in Russia and in other countries of the world where human rights are violated without restriction.
It turns out that Garry Kasparov wants to bring Russia and “other countries of the world” to peace and prosperity, and it turns out that Latvian citizenship is suitable for this today. Strangely, we thought that if a person wishes, for example, Russia peace and justice, then he needs to at least live and work in Russia ... But no ... Kasparov has a completely different chess layout.

Of course, the Latvian authorities are pleased to see a combination of the words “citizen of Latvia” and “in the name of democracy” in one sentence, but the feeling of some kind of trick, apparently, does not leave them. Confirmation of such a thesis can be considered the words of representatives of several parliamentary factions of Latvia at once. For example, the deputy of the Latvian Seimas Dzintars Zakis (faction "Unity") does not consider Kasparov a person who has made any contribution to the development of Latvia, and therefore the citizenship of this Baltic state is not worthy. One of the leaders, August Brigmanis, head of the Union of Greens and Peasants, adheres to the same point of view, stating that his faction is not ready to support Kasparov’s petition. The representative of the Reform Party, too, Edmund Demiters, sees no reason for granting Latvian citizenship to Kasparov.

However, the letter by Garry Kasparov contained the text not only that the Latvian citizenship would help him to engage in political activities. The chess player's epistle is also aimed at revealing his parallel desire. It turns out that Harry Kimovich is aiming for the presidency of FIDE (International Chess Federation). Since 1995, Kirsan Ilyumzhinov heads this federation, and this is what Kasparov writes to the Latvian deputies on this matter:

Under the conditions in which the former president of Kalmykia, Kirsan Ilyumzhinov, a man who has led the federation for the nineteenth year and is supported by the current Russian government, is my main competitor, I cannot entrust the issue of the freedom of my movements to Putin’s Foreign Ministry. Participation in the election campaign, as well as the work as president of FIDE, requires constant movement around the world.

Like, how can I, as a probable FIDE president, be able to cut the ribbons, opening up various international tournaments, if the “Putin's” Foreign Ministry is following my movements ...

To enhance the effect of the significance of the decision of the Latvian deputies on this issue, Kasparov adds:

The liberation of Russia from the Putin regime and its transformation into a democratic, legal European state were and remain for me priorities. The fact of my temporary forced absence on the territory of Russia does not change anything in this regard.

In general, the 13 world chess champion is going to put two birds with one stone at a time: both the current FIDE President is “sorted out” and the current Russian President “from there” is literally everything he thinks about ...
Latvian deputies are in deep thought. On the one hand, they can give Kasparov a Latvian passport “for special merits” just to annoy Moscow, but on the other hand, what can we expect from Moscow? If you give citizenship, if you suddenly give mate to Riga, if you don’t give it, they will say that Riga has Moscow under its heel ... There is some kind of plug.

The journalists of the consideration of the petition Kasparov told the deputies of the Latvian Sejm. According to one of them, the petition will be considered by the so-called "commission for the consolidation of society." If the commission considers the petition to meet the interests of the Latvian state, then the vote will take place directly in the Sejm, where to grant Kasparov citizenship “for special services”, 50% + 1 is needed for the vote of the deputies. However, the main difficulty so far is that apart from writing to individual factions (which, according to Latvian law, it is not enough to start the procedure) nothing more exists. And something bigger is an official petition addressed to the speaker of the Sejm or a representation from any ten deputies.

Interestingly, before sending letters to the Latvian parliamentarians, Garry Kasparov wanted to make the same move with respect to Estonian lawmakers. Estonians explained to Harry Kimovich that their number with a second passport will not work, since only one citizenship is practiced in Estonia - Estonian, and if Kasparov does not intend to give up Russian citizenship, let him look for happiness from his Latvian neighbors. He is looking for ... He is searching for all factions, except for the “consent Center”, which has 33 seats in the Sejm.

Why did not write to everyone? It turns out that the Accord Center has some agreements on cooperation with United Russia, and that, you see, Kasparov scared ...

However, it not only scares him, but also his own actions made some time ago. These actions today for Kasparov in Latvia are a real Achilles heel. The fact is that at one time he actively criticized the Latvian authorities for persecuting the leader of the party “For the mother tongue!” Vladimir Linderman and inciting the latter to prison, incriminating him with extremist appeals and possession of explosives. For the Latvian authorities, Linderman is a slippery figure, since in 2011 he won a court case against the Latvian Ministry of Justice and even filed a lawsuit against former Latvian President Vike-Freiberga (2012). The last case lost, but, as they say, he left the memory of his deeds. Some deputies recall the support of Linderman Kasparov, and therefore clearly do not rush to give citizenship to Kasparov.

Ctrl Enter
Noticed oshЫbku Highlight text and press. Ctrl + Enter
We are
Five years for a cartoon bike. A victim of political repression in Latvia may become the mayor of RigaBaltic insanity: three years in prison for "denying the Soviet occupation of Latvia"
109 comments
Information
Dear reader, to leave comments on the publication, you must to register.