Energy front: scramble for the Great Eastern Pipe and the output of the Nord Stream at full capacity

November 12 2013
57
The past week was not rich in any specific events or decisions. But there were several generalizations: it is to them that we ask to draw the attention of readers. 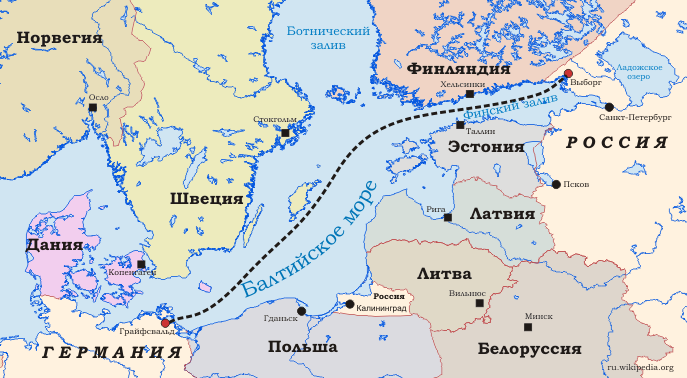 Award for the East

Probably the most interesting was the publication of estimates of the profitability of oil exports in various areas. So, according to representatives of Transnfeti, supplies to the east turned out to be more profitable for 5 – 6 dollars from each barrel. The yield was calculated on the so-called netback - the oil prices at the points of sale (Kozmino port in the east and Primorsk / Ust-Luga / Novorossiysk in the west, as well as at the end points of pipeline deliveries) minus export duties and delivery costs. It is not surprising that as a result, oil companies actually began to break into the East Siberia - Pacific Ocean oil pipeline (ESPO). As long as the download is still incomplete, it will be so next year, but it is a matter of time. Connecting new fields is not easy, and the inertia is great here. But not fast and the process of expanding the pipeline. Recall, the capacity of ESPO-1 (from the starting point to Skovorodino, where a branch to China appears) is 50 million tons, and the capacity of ESPO-2 (from Skovorodino to Kozmino port) is 30 million tons. An interesting table (in the first line of a typo - instead of 37,8 should be 87,8) with reference to the data of the same "Transneft" lead "Vedomosti". 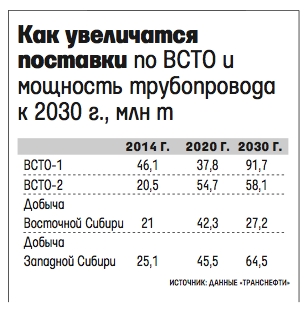 According to this forecast, even in 2014, the available volume is enough. But by the year of 2020, the demands of the suppliers will exceed the available capacity even taking into account the planned expansion (ESPO-1 to 80 million tons). Most interestingly, the estimated increase in ESPO supply is moderately associated with the development of East Siberian reserves, and mainly with the involvement of West Siberian oil in transportation to the east. In all likelihood, in the western direction, only long-term supply-related contracts will remain with suppliers, and the volumes of short-term contracts will be transferred to the east. Now Transneft raises the issue of increasing the cost of pumping in the eastern "premium" direction. Even in this case, exports to the east will still be profitable. The extra 10 – 20 dollars per ton that Transneft wants to get is 1,5 – 3 dollars per barrel. The funds received can both be spent on the development of the pipeline itself and directly transferred to the budget.

This is what RIA reports NEWS
"Transneft is proposing to introduce an additional investment and budget component in the tariff for pumping oil through ESPO for the supply of oil for export, a source close to the Ministry of Energy told Prime agency.

"The company says about the upcoming shortage of ESPO capacity and the need to increase it. In this regard, it is advisable to introduce a special additional investment tariff of ESPO, which will be relevant only when exporting oil, respectively, it will not affect inflation in any way," the source said. in this case, the premium can be 10-12 dollars per ton.

Another option could be a surcharge to the tariff in order to simultaneously replenish the budget. "When, for example, 10 dollars will be used to expand the capacity of ESPO and 10 more - to the federal budget in order to develop the Far East," said the source. According to him, such a proposal has just been announced by Transneft, it has not been documented as of today.

Igor Demin, an adviser to the president of Transneft, confirmed in an interview with Prime that the eastern direction of export is “super-premium” for oilmen. According to Transneft, compared with the western direction, the premium here is at least 30 dollars per ton, and sometimes even reaches 50. "We need to build additional pumping stations by 2020, refit existing stations and perform other works totaling 172 billion rubles. Because based on the petroleum company applications, the predicted pumping volume in 80 million tons per year, which we expected in 2030, becomes real in 2020 ", - said Demin.

An alternative way out of this situation, he said, could be the division of volumes between oil companies and the conclusion of intergovernmental agreements. However, Transneft is inclined to the option of increasing the capacity of the pipeline.

In addition, according to the source, during the discussion, suggestions were made to deprive the fields of Eastern Siberia of benefits, which Transneft opposed. The company believes that in this case, the field will no longer develop, and there will be a reversal of cargo flows."

Euroregulation of energy: there seems to be hints of common sense

Gazprom is increasing its gas exports to the EU. In October, shipments rose by 17% compared with October last year. For comparison, in the first half of the year, shipments grew by 9,6%. That is, it has become very hard to increase EU imports in recent months, and before that I tried to knock out maximum concessions.
Here is what RBC writes about it
"Gazprom in October 2013 increased its exports to Europe by almost 17% compared to the same month last year - to 13,48 billion cubic meters, head of the concern Alexey Miller told reporters." Against the background of a steady increase in Europe’s gas demand, Gazprom is actively building the South Stream.
“The other day we started its construction on the territory of Bulgaria, by the end of the year we will begin construction in Serbia. South Stream is more relevant than ever,” Miller said.
Earlier, Gazprom noted that gas supply by the concern to foreign countries for 9 months 2013g. compared to the same period last year, increased by 15,5% - to 119,4 billion cubic meters. m. In the I half 2013g. 79,5 billion cubic meters were supplied. m (+ 9,6% to the result of the same period last year).

The project to build the South Stream gas pipeline across the Black Sea to the countries of Southern and Central Europe is being implemented by Gazprom in order to diversify natural gas export routes.

Recall that in 2012g. The International Energy Agency (IEA) published the report “The Golden Rules of the Golden Age of Gas”, in which it was noted that in the future Russia would lose the position of leader in gas production and the position of the most important gas supplier. The IEA predicts a decline in the share of Russia and the Middle East in the global gas trade from 45% to 2010. to 35% in 2035.

All this, according to IEA experts, will allow Europe to achieve lower prices for gas supplied to the region. “Europe will benefit mainly from lower prices for imported gas, which will put pressure on contracts for the supply of traditional gas with the price pegged to the price of oil,” said IEA chief economist Fatih Birol.

It should be noted that the average price for European consumers in October was only 382 dollars per thousand cubic meters.

In an expeditious manner, the beginning of the Nord Stream tests under full load will help to replenish underground storage facilities (the download to which this year began later than usual). The fact is that until recently, there was only one tap from the onshore continuation of a pipe in Germany - the OPAL gas pipeline (capacity - 36 billion cubic meters). Therefore, Nord Stream was doubly unloaded - both because of the Third Energy Package, and because the second branch, the NEL gas pipeline (20 billion cubic meters), was still being completed. Now it is ready, and the European Union issues a temporary permit for full pumping (for the purpose of testing), at the same time solving its own problems in filling the UGS. The situation is almost the same as in March of this year, when Europe did not have enough gas, and - also under the pretext of commissioning - the Nord Stream began to fill OPAL completely, not half. But the main question is what will happen after testing? Will Gazprom achieve the exclusion of OPAL and NEL from the rules of the Third Energy Package? In any case, against the background of the latest demarches of Ukraine - all this is very timely.

So far, the European Commission is once again scaring the Russian monopolist with its anti-monopoly investigation, but prudently decided to publish its results only in the spring.

However, perhaps common sense will appear there. Another interesting news suggests that the EU suddenly began to look not only where it was light (that is, blame Gazprom for all of its problems), but also where it lost (miscalculations in its own energy policy). The other day, Günther Oettinger, the European Commissioner for Energy, said that the European Commission intends to conduct a large-scale study on the problem of reducing the cost of natural gas and electricity.

In addition to the traditional lamentations about the dominance of monopolists and the oil price peg, some problems were formulated by Oettinger quite accurately. The European Commissioner acknowledged that high prices are also associated with subsidy systems: “We want to know what subsidies gas, nuclear and renewable energy has.” It is not difficult to guess that gas and atom are added here for political correctness, and the main problem is in renewable sources. In addition to the objectively high cost of such energy (even if the prices look acceptable, given the subsidies, in fact this is the redistribution of traditional generation revenues in favor of the alternative), there is another problem. Due to the inconstancy of wind and solar generation, traditional electricity suppliers must have spare capacity ready (you can read the details of these topics in detail here). This leads to additional costs, respectively, alternative generation indirectly increases the cost of traditional energy. In addition, Ettinger noted another factor in price growth - the creation of new infrastructure. Let us explain: in an effort to create a competitive environment, the European Union has often built redundant infrastructure (LNG terminals, additional interconnecting gas pipelines). Now all this is idle, but these costs have to be taken into account in the final cost of energy.

Ctrl Enter
Noticed oshЫbku Highlight text and press. Ctrl + Enter
We are
The past, present and future of Russia's energy strategy
57 comments
Information
Dear reader, to leave comments on the publication, you must to register.