The soldier will not go hungry 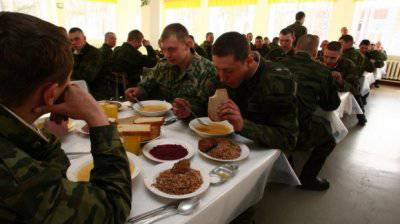 Oboronservis holding under the Ministry of Defense is in for a major reorganization. Proposals for the new structure and functions of this joint-stock company will be submitted to Sergei Shoigu by mid-December.


They are already being prepared in the department of property relations of the military department. The task of his experts is not easy. On the one hand, the work of the holding should be built so that it fully provides for the economic needs of the army. On the other hand, he ruled out, as far as possible, the theft of state money. Recall that the former leaders of the defense holding company became famous for this scandalous way.

In a sense, the field for embezzlement of army finances and frauds with movable and immovable property under the jurisdiction of Oboronservis narrowed down after Sergei Shoigu decided to transfer to the Ministry of Industry and Trade three subsidiaries of the holding company - Spetsremont, Aviaremont and Remvooruzhenie ". In addition, they plan to withdraw the property complex of Krasnaya Zvezda from the joint-stock company, and Agroprom to liquidate it altogether.

A structure will appear in the Ministry of Defense, which will organize the supply of the army during the war and during exercises
- And what remains with us? "Slavyanka", "REU" - is the current repair and maintenance of the housing and utilities fund. "Oboronenergo" - the maintenance of electrical facilities. "Voentorg", which is engaged in food, tailoring, bathing and laundry services. As well as the functions of military construction - this is “Oboronstroy” and “The Main Directorate for the Arrangement of Forces. This, in fact, is all the functionality that remains from Oboronservis,” RIA said News Director of the Department of Property Relations of the Ministry of Defense Dmitry Kurakin.

Other news directly concerns the department, which is headed by an official. According to Kurakin, the Minister of Defense approved a new concept for managing the assets of the Armed Forces. In fact, this is the first strategic "non-military" document in stories Russian army. There is a detailed description of what the department should do. The key areas of work, in particular, include the improvement of the registration of immovable military property, the definition of its objective function and its effective management. The document says about the new rules for the sale of military property. His pre-sale preparation - accounting, execution, evaluation and other operations will now fall not on the Ministry of Defense, but on the seller, who will be authorized to trade in an army that is not needed by the army.

“Taking into account the redundancy of real estate areas at the disposal of the Ministry of Defense, including military camps, educational, cultural, municipal facilities serving the needs of the population, one of the main criteria is the speed of transferring such property to new owners,” Kurakin clarified.

And one more important point. The Defense Ministry is thinking of creating a structure that will take over the organization of supplying the army with everything necessary during the war, exercises and checks of readiness. The experience of recent years has shown that merchants serving military units as part of outsourcing are not eager to travel to the fields to feed soldiers in the trenches. So, we came to the conclusion that the Ministry of Defense would have to do it by the military, or by the workers and employees of the Russian army.

Ctrl Enter
Noticed oshЫbku Highlight text and press. Ctrl + Enter
We are
New sharp turns in the Oboronservis case: an agenda for Anatoly SerdyukovSit, but at home. Evgenia Vasilyeva arrested in the case of Oboronservis
13 comments
Information
Dear reader, to leave comments on the publication, you must to register.