“People there understand what Russia is” :: Interview with a priest serving in the Caucasus in hot spots 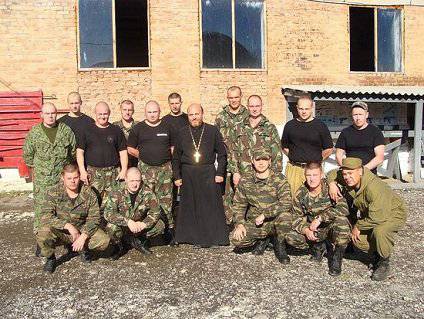 The other day, Archpriest Andrei Tulyakov, rector of the Vologda church in the name of the Holy Prince Alexander Nevsky, returned from the “pastoral mission” to the Caucasus. Father Andrei, the head of the department for interaction with the armed forces, law enforcement agencies and the Cossacks of the Vologda diocese, went there with police officers who had to serve for half a year in the far from easy conditions of the Caucasus, and during the week communicated with our children in Chechnya, Dagestan and Kabardino Balkaria. We asked the priest a few questions.


- Father Andrey, was this your first trip to the Caucasus?
- No, this is the fourth pastoral journey in the last two years. In general, clergymen of the Alexander Nevsky Church of Vologda have been constantly traveling to the Caucasus since the beginning of the 2000s. I just continue once started a good cause.

- Were not afraid to go?
- Rather, I was worried: I was always very worried about the good service, about finding the right word for the soldiers asking you about something important for them. And, of course, you hope in God. There is no fear: first, now the Caucasus is still calmer than a couple of years ago; secondly, be afraid - do not be afraid, but the priest must bear his service, as well as our military and policemen; and thirdly, if you hope in God, then fear retreats - millions of times checked. So the main thing is the same anxiety that experienced during the ordination: to serve adequately.

- Where were you in the Caucasus?
- In Kabardino-Balkaria, in Nalchik - there is a detachment of the Vologda Special SOBR located there; then in Dagestan, in Khasavyurt - there is a consolidated detachment of our policemen; then in Chechnya, in the village of Shalazhi — our OMON is there. 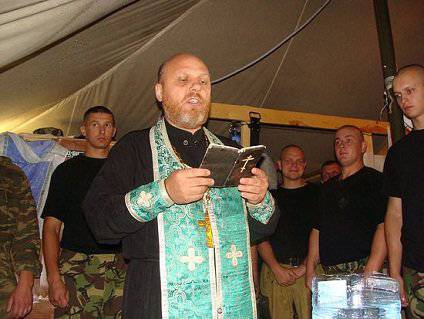 - You talked about the dignity of service. And what is it, this pastoral ministry? What are its features in the Caucasus?
“I am convinced that it is both natural and necessary to teach blessing to people, our soldiers, who carry out the most difficult and noble service for the good of the Fatherland. Both for the Church of Christ, and for the soldiers themselves, and for their loved ones and relatives who stayed at home. And, therefore, for all of us. We say: "Our army", "Our country", "Our Russia"? If we don’t say, then it’s a disaster: both Russia and us. But most, I know, still says. And behind the words should be the case. With such words and deeds we become compatriots. Without this, we are some sort of “partner”. So, I think, the pastoral service in the Caucasus also includes enhanced patriotic education. It is always vital, it’s just that its need is tangible: it’s visible that its relevance is seen in our society. You see, there you will never hear this criminal and squeamish: “this country” - there people understand what Russia is. And often they die for the Fatherland.

- How do locals behave in relation to Russians? How is life there?
- Let's not forget that, more recently, the Russians were also local residents in the Caucasus. And if you take purely external impressions, then I was surprised by the beautiful roads built in Chechnya, the large, spacious houses, cleanliness and wealth - especially in Grozny, Gudermes, Shali. In Kabardino-Balkaria, a huge number of Mercedes, Chrysler and other car dealerships were surprised. I didn’t see Avtovaz there, and I think it’s not easy to do. Such a picture against the background of official statistics on the highest unemployment rate in the country runs counter to the idea that the unemployed are poor, ragged, and hungry. And at the same time it makes one think about the origin of the money for which all these Mercedes and Chrysler are bought. But it is, by the way.

In Grozny, near the heart of Chechnya mosque, there is a small Orthodox church in the name of the Archangel Michael. The young senior priest of the church, Father Alexy, told me that a small Russian community remained in the city, that the temple was being helped by the head of Chechnya, Ramzan Kadyrov, that there was a small parish house.

The Orthodox Church has been preserved in Khasavyurt. There, the Orthodox community is bigger than in Grozny. There is a cemetery: one part is Muslim, the other is Christian. By the way, the cemetery is beautifully maintained, no vandalism is not there. I know that in Kosovo, in Mitrovica, there is a Muslim cemetery in the Serb part and a Christian cemetery in Albania. And if the Muslim cemetery on the Orthodox side is safe and sound, then the Serbian in the Albanian - desecrated and destroyed along with the church. This, thank God, is not in the Caucasus.

And the majority of Caucasians treat Russians with respect and love. Here, for example, our children say that in conversations with them there are often requests that the Russian police remain there: they say, there is little hope for their young ones in terms of order and law.

- And this is not flattery? Sincere words, what do you think?
- I think that sincere. Caucasians do not need war - they themselves suffer from them. After all, hostile sentiments are kindled in the Caucasus and controlled from the outside. Financing of gangs also comes from abroad. In these gangs - representatives of absolutely all nationalities. And they have learned to cover up their crimes with the “struggle for the purity of Islam”. A religious card is also played by recruiting local youth into gangs. However, this is just such a “decent” cover, or something: in fact, direct threats are much more often used (“if you don’t go to the mountains with us - we will kill the family”), blackmail, poor financial situation of the family, man’s vanity (“what you are a man, if you go without a machine gun? ”), many types of psychological treatment. So, the local Caucasian population, especially the young one, is simply a changeable map for large and very dirty geopolitical as well as economic games.

- Often you hear these words: “What is Russia doing in the Caucasus at all?” We would build a big wall around the mountains - and everything will be fine. "
- It will not be all right. On the contrary - it will be even worse. If we leave the Caucasus, the Kosovo case will seem like a child's play: it will be much worse. And the fences, about which their supporters like to say so much, we will have to push deeper and deeper into Russia - until they surround the “Russian Orthodox ghetto” allocated to us. However, I generally doubt that even the ghetto will be set aside for the Orthodox - we are talking about the destruction of Christianity and Russia at the root. Think: how many Russians have become refugees lately because of the wars in the Caucasus! Official statistics do not like to talk about this, but there are no fewer refugees. We will leave from there - gangs will move further. Lose and Stavropol, and Volgograd, and so on.

Do not think that the enemies of Russia are a horror story of self-assured “hurray-patriots”. We have enemies who aggressively pursue their goals. We are, thank God, fighting. Let's stop fighting - we will simply be crushed, we will be crushed into powder. I think all our warriors understand this well.

- What do soldiers and policemen think about the appearance of a priest?
- Very friendly! Often in difficult situations, devoid of the usual peace and comfort, a person remembers God, the Church. When you do not know what is preparing you not only for the next day, but for the next second, you begin to be convinced of the need to establish a trusting and good relationship with Christ. So for very many of our soldiers and policemen, such our business trips are a reason for thinking about God and eternity. For many - and an occasion for very serious reflections and actions. So there is a blessing in disguise: even danger can be used as an opportunity to draw closer to God. If in peacetime we do it badly ... Although it would be better to work - you see, and the need for danger would disappear.

And how do we meet the priests? - With joy. Together with the Vologda guys in Khasavyurt there were policemen from Magadan, in Shalazhi - from Rostov and Saratov. They see that the priest has come to Vologda, everyone goes: “Father, bless, we are for prayer”. All the joy - and the priest, and our children, too, feel themselves the masters: after all, the "their" father has arrived.

I think the time of savagery has long passed, when people were running from the priest with horror eyes, having been tipped off by "anti-religious propaganda." Now the guys, and even more so in such conditions, know why the priest comes. It should be noted once again that service in the army or in the police in such conditions is a good reason for the qualitative improvement of a person’s spiritual literacy. Such conditions contribute to the fact that a person begins to be interested in things that are much more important than what kind of hand to put a candle or from what metal to buy a cross. People think about more serious - real - questions of the spiritual life.

- Still going to go to the Caucasus?
- The priest has a military principle: I must go - I will go. God willing, succeed.

Ctrl Enter
Noticed oshЫbku Highlight text and press. Ctrl + Enter
We are
What you didn't want to know about EnglandReligious conflict in Abkhazia? It is possible
75 comments
Information
Dear reader, to leave comments on the publication, you must to register.