US escalates military rhetoric against China 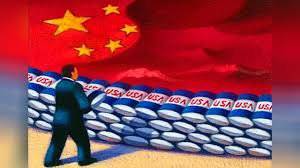 According to estimates by various foreign observers, a rather obvious aggravation of relations between the PRC and the USA has recently been taking place, despite the readiness declared by Washington to develop bilateral cooperation in a number of areas. This situation, according to analysts, is largely due to the adjustment of the US military strategy and the special emphasis placed by the Americans on strengthening the strategic presence in the Pacific region, as a method of confrontation with the expansion of the PRC in Asia. This confrontation is most acute in the military-strategic area and rivalry in influencing regional trade and economic associations.

The most striking evidence of the growth of anti-Chinese sentiment in the American political establishment was the 30 of October of this year. meeting of the subcommittee on Europe, Eurasia and emerging threats from the international committee of the US House of Representatives. According to his results, this meeting was marked by a significant increase in incitement to Washington’s military confrontation with China in the Asia-Pacific region.

The theme of the subcommittee’s meeting chaired by right Republican Congressman Dana Rohrabacher was: “China’s Maritime and Other Geographical Threats.” The explicit purpose of these “hearings” was to search for American politicians to further strengthen US expansion into the Asia-Pacific region through military confrontation. with China based in this activity on Japan.

In contrast to the official rhetoric of the White House "on the development of cooperation with the PRC," Dana Rohrabacher, opening the meeting of the subcommittee, said: "We are in a cold war with China." He attributed China to a clear international threat in its desire to dominate the Asia-Pacific region, questioning the legitimacy of China’s territorial claims in the East China and South China seas. He regarded these claims as “unfounded”, “doubtful” and “expansive”. Rohrabacher criticized the Obama administration for not officially supporting the territorial demands of the Philippines in the South China Sea. In his opinion, Washington’s neutral position in territorial disputes with China in the South China and East China Seas is to the detriment of its American allies.

Obviously sticking a confrontational stance in relations with China, Rohrabacher accused Beijing of “sending tens of thousands of students to the United States to collect secret information and, above all, in the field of armaments, in order to use this information for the interests of the Chinese army.” According to Rohrabacher, Chinese hackers penetrating US government and research centers also pose a serious danger to the United States.

Rohrabacher’s rhetoric was reinforced by committee member Alan Lowenthal, who noted that “of stories it is necessary to draw appropriate lessons and, if no conclusions are drawn, the new Pearl Harbor could take the United States by surprise, and the future will be like the events of 11 of September of 2001. ” Therefore, according to him, "it is necessary to treat China with more alarm."

Warlike appeals were picked up by the oldest member of the US House of Representatives, Congressman William R. Kiting (William Keating), who criticized the policy of reducing the US military budget, which, in his opinion, instills in the ranks of the American allies uncertainty about the ability of Washington to protect their interests.

Of course, the timing of the hearings on this issue in the subcommittee of the US House of Representatives draws particular attention. After Washington’s refusal by the international community to carry out a military strike against Syria, Obama’s demonstrative non-participation in recent Asian summits and scandalous revelations of the espionage activities of US embassies and consulates around the world in the interests of the National Security Agency, the US foreign policy is in a clear crisis. Under these conditions, the American political establishment clutches at the “Obversion towards Asia” proclaimed by the Obama administration to take revenge on the international front and, jointly with its allies, militarily block China in the Asia-Pacific region. This circumstance caused the calls for the creation of an Asian military coalition proclaimed at a meeting of the subcommittee, with the United States playing a leading role in them and with the main support in this activity for Japan.

Given such appeals by American politicians and the policy pursued by the Abe government to increase the military budget of Japan, along with the loosening of constitutional restrictions on the use of national armed forces, we can hardly expect a weakening of Tokyo’s militant position in the territorial dispute with China in the near future. Perhaps, as well as the constructive role of the United States in easing international tension and regional conflicts.

Ctrl Enter
Noticed oshЫbku Highlight text and press. Ctrl + Enter
We are
Military reform as an integral part of the security concept of the Russian Federation: Systematic dynamic assessmentRevealed the secret of provocation in the American Boston
47 comments
Information
Dear reader, to leave comments on the publication, you must to register.