Technique "melting pot": how to make "them" "us" 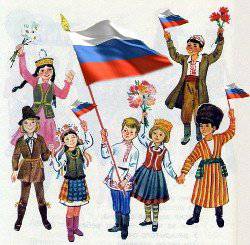 Recently, by the efforts of a certain group of persons, the issue of friendship between the peoples in our country has sharply escalated. On the aggravated topic all started talking.


Dear Margarita Simonyan - the editor-in-chief of the Russia Today TV channel - expressed in her blog several thoughts concerning us and directly and which caused abundant commenting on various degrees of adequacy. Margarita in her text mentioned one of the solutions to the national question, which seems to me promising - the solution of the “melting pot”.

“For the preservation of the Motherland, the Russians, in their present form, have no other way than to give birth more and assimilate more. Not to drive away from yourself, not to frighten, not to cut in the subway, but to melt into one common culturally Russian mass, into the as yet non-existent single Russian people of all non-Russians born and raised on our land. You just need to stop playing once in other people's contexts and ideals, in beautiful Europe multiculturalism that poisoned Europe almost to death, at all costs preserve and strengthen the unique cultures of small nations, in non-Russian alphabets and languages. Our история, our culture, our values, our first and main language - all this should be one, indisputable, monolithic, irreversible, independent of who talents scream at a rally or tribune. Once and for all. The rest is a matter of technology. "

I would like to talk about the rest. About the fact of technology.

At the head of the average man in the street with the word “melting pot”, there are charming pictures of an alternative school childhood, in which a kind teacher with wet eyes feels the class about the culture of the peoples of the Caucasus. After that, everyone eats kebab cooked by the boy’s father, Armen, and the next day after the lessons of the culture of the peoples of the North, everyone eats stanutine, then Russian culture with Easter cakes and so on - until complete obesity and shortness of breath.

There is another understanding of the "melting pot" that exists in the heads of our nationally preoccupied people. According to them, the “melting pot” is when a Russian marries an Armenian woman, and then their child acquires a full cap on every full moon and is tempted to sell persimmon to people.

News: it is not a melting pot. This is multiculturalism.

There is nothing wrong with that - culture needs to know. The more cultures you know, the more you understand the person as a whole. Knowledge of cultures develops the mind, a sense of tact, increases the overall cultural level.

But you need to understand that all this is useful and pleasant additions to the main thing, which cannot be replaced by cultural lessons.

Multiculturalism forms weak superficial connections of various groups with each other. The fact that they are weak and superficial does not mean that they are bad and unnecessary. They are needed, but this is not enough. This is a kind of - first acquaintance, introductory chapter in human communication. No more, but no less.

A melting pot is a much more entertaining and fun thing.

At school, the melting pot begins when a physics teacher issues a list of tasks to the class and a deadline for solving them with a deadline. When a physical education teacher sets up a baton with a score of the last.

The melting pot does not just establish new strong and deep connections between the members of society - it destroys the old connections. Generic, teip, connections of the “big family”, establishing the hegemony of the family of small and labor collectives as new communities and cells of society.

The melting pot destroys the old taboos and prohibitions that divide people along ethnic lines. Let me show it with the example of Margarita Simonyan:

“My great-grandmother fled to 15, to the genocide, from Trabzon, where her homeland was, in the then Russian Crimea, from Turkish knives, slaughtered her brothers, sisters and parents. My grandmother was born and raised in Sochi, but she did not speak Russian until 18 years. My father was not allowed to marry a Russian, because the diaspora does not approve of marriages with strangers, even if this diaspora lives in the Ural Krasnoturyinsk, where my father was born. I myself - the fourth generation - was born in Krasnodar, I don’t speak Armenian, I hardly know Armenian history, I was in Armenia once, in 25 years, with Putin on a business trip, and my Homeland is definitely Russia. My family history, so to speak, is horror and tragedy from the point of view of the history of the Armenian people. And from the point of view of the future of Russia, this is the only way that should happen.

A small Dagestan, an Ingush, a Tatar, a Kalmyk (who else is being cut in the Moscow metro?) Should know that he is first of all a Russian, and then already a Dagestan, an Ingush, Tatar, Kalmyk. Whatever his parents may think about it. How I know it, how my children will know it. ”

Communities immersed in this “melting pot” lose their hardness, prohibitions, taboos, scenarios of behavior that contradict common interests. Why were the marriages of Armenians with Russians not allowed before, and then they began to be allowed? What, is this diaspora so kinder? Or maybe the diaspora itself has disappeared? What is missing in the story of Margarita? How does this happen? How is this “melting” effect achieved? What is the impact, what is this environment that makes the people "melt", losing the old connections and values, and establish new ones?

The cultural image of the people, its traditions, folklore, architecture is the result of its lifestyle, which is dictated by its habitat - the landscape. The landscape defines the problems that the ethnos must overcome, and - most importantly - the relations of production. The appearance of a people is a reflection of its way of earning a living.

The melting pot is turned on when the habitat of the people changes dramatically. This may be due to migration or changes in production relations.

In the case of Margarita Simonyan’s family between the migration of her grandmother to Russia and the appearance of Margarita herself, we have Soviet industrialization, universal education and scientific breakthrough - the very factors that changed the nature of production, which resulted in a change in social relations, and, consequently, lifestyle, culture, and worldview.

Soviet melting pot boiled over energy upgrades.
What I would like to especially note is the mobilization nature of Soviet modernization, which put many people in a situation where extraordinary efforts to achieve a common task simply pulled people out of national and family prejudices. They mobilized a person to such an extent that there was no time, force or will left for prejudice.

This was how inter-ethnic marriages arose, this is how a Soviet person arose.

This can be seen now in labor collectives. But not often.

Our current problems with interethnic relations, cooling the melting pot, with fake integration and other things are the result of a change in production relations.

Primary capital accumulation in Russia is the opposite of production.

What is privatization and primary accumulation? What is behind these beautiful words?

This is a robbery and hacks.

Roughly speaking: it is in order to produce, study and discover, we need a workforce with all its attributes, and it is best to steal and seize on the basis of nationality and kinship.

Immediately changed and culture. To be wild is easy.

We need to be aware that if we are a country of business, reform and trade, then our culture and our elite will be the culture and elite of usurers, appropriators, schemers and traders. And there is nothing to be astonished to look at the degradation of the Bolshoi Theater, the “vocals” of Baskov and the “ballet” of Volochkova - for merchants and thieves, and so will come down. And, of course, Russia will then be the battlefield of barracks, privatizers and budget makers with the involvement of diasporas, fraternities, fraternity and connections in the apparatus.

If you want more, you need to completely change the way of life of the country. Production lifestyle.

To start the melting pot, you need to run the progress wheel.

The result of this launch, I believe, will be the restoration of Russian cultural hegemony throughout the post-Soviet space.

Nationalist have something to think about.

Ctrl Enter
Noticed oshЫbku Highlight text and press. Ctrl + Enter
We are
A great interview with Sergey Lavrov: about Ukraine, Obama and IranVladimir Putin's interview with Russia Today TV channel
112 comments
Information
Dear reader, to leave comments on the publication, you must to register.