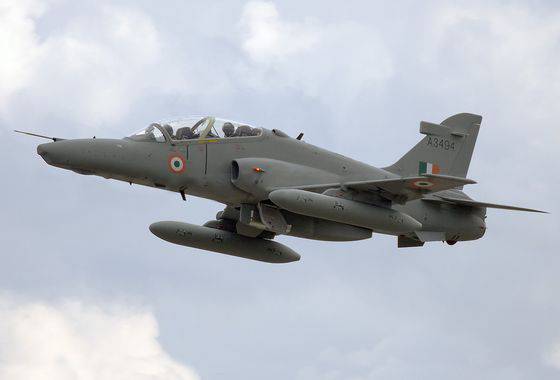 
Hawk AJT is a double multipurpose aircraft equipped with a Rolls-Royce Mk.871 engine. The aircraft is used for basic and in-depth training of pilots. At the same time, it can be used as a ground attack aircraft and an interceptor fighter.

The aircraft is equipped with a “glass” cockpit, an on-board computer with an open architecture, a combined inertial / GPS navigation system of a new generation.

The equipment includes Indian-made systems, including communications equipment, a friend-to-alien identification system, and a radio altimeter.

As TSAMTO had previously reported, the Indian Defense Ministry ordered a total of 121 Hawk AJT aircraft (Hawk Mk.132). The first contract, signed in March of 2004, included the supply of 64 aircraft for the country's Air Force, including 24 units manufactured in the UK, and 42 units. - HAL company in India. The cost of this party amounted to 1,8 billion dollars. In July, 2010, an additional contract was signed with XAL for 779 million dollars for the supply of an additional batch from the Indian Air Force and Navy to 57 TC Hawk, including 17 units. for the Indian Navy.

Delivery of the first batch of TCB AJT ended in the summer of the year 2012. To date, the second contract delivered 5 TCB for the Air Force and one for the Indian Navy. All aircraft of the second batch must be transferred to customers by 2016 year.

At the end of 2012, BAE Systems handed over to the Indian HAL a proposal to supply the Indian Air Force with a third batch of Hawk ATS for equipping the Surya Kiran Aerobatics Team - SKAT aerobatic team in the request for an additional 20 TCB supply.

Ctrl Enter
Noticed oshЫbku Highlight text and press. Ctrl + Enter
We are
The 20 rating of the largest arms deals, decisions on which were made in 2012As part of Vladimir Putin’s visit to India, a number of large MTC contracts are expected to be signed.
12 comments
Information
Dear reader, to leave comments on the publication, you must to register.