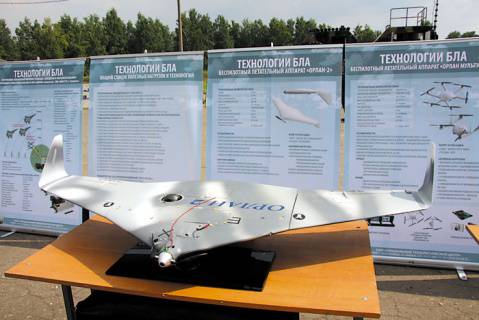 Serial deliveries of unmanned aerial vehicles (UAVs) for various purposes are now being carried out in intelligence units. Major Anton Goncharov, the representative of the press service and information department of the RF Ministry of Defense for the Ground Forces, who reported this, said that work is currently underway to transfer intelligence units to a promising organizational and staff structure. Unmanned companies are formed in combined arms formations aviationwhich it is envisaged to equip with modern systems with UAVs of various ranges of action - "Orlan", "Aileron", "Tachyon", adopted for service and undergoing military operation. The reconnaissance of the Ground Forces is also being carried out with other modern technical means - Fara-VR, Sobolyatnik-O, Sekstan, Sagittarius.


The Russian defense industry is now rapidly catching up with the militarily leading states in the development of combat unmanned aircraft. In addition to a number of already created samples of military UAVs, new vehicles are being actively developed. So, last Tuesday, news agencies received a message about the 10-kilogram drone K-7, which covered the record-breaking distance 2232 km for its class during the first test phase. The flight took place at a speed of approximately 100 km / h. According to NVO, the goal of creating K-7 is to achieve the maximum duration of a UAV flight - at least 32 hours. On this device, a new aerodynamic scheme and a non-standard aerodynamic approach to the creation of the device are applied specifically to solve the problem of long-term airborne. Now the project is at the stage of preliminary testing and preparation for mass production. To complete the tests K-7 is scheduled for May-June 2014. Other developments are underway to create the most powerful unmanned reconnaissance and strike systems.

Ctrl Enter
Noticed oshЫbku Highlight text and press. Ctrl + Enter
We are
Russian Ministry of Defense will purchase Strelets-Watch bracelets for 400 million rublesServicemen of the Russian base in Armenia master Takhion reconnaissance drones
30 comments
Information
Dear reader, to leave comments on the publication, you must to register.