November 8 2013
134
SOCOM - the command of the special operations of the American army - began to collect information about the possibility of developing wearable armor for the soldiers, which is in many ways similar to the famous costume of Iron Man, one of the most famous characters in the comics from Marvel, which was invented by Anthony Starck. According to the newspaper The Los Angeles Times, the US military expects to spend no more than a year on the development of the current prototype of the new armor. There is already information that Revision Military, which was founded by former special forces captain Brian Dowling, and another American company, Raytheon, and the British defense concern BAE Systems, have announced their desire to create a suit for SOCOM.


The armor of the new generation for the soldiers has already received the name TALOS, which stands for Tactical Assault Light Operator Suit (light tactical assault suit of the operator). It is reported that such a costume will have a whole set of unique characteristics that the fictional superhero of comics had, of course, without the possibility of flying. It is assumed that the TALOS suit will be based on an exoskeleton that will allow the soldier to run and jump, carrying a full set of equipment more than 45 kg, even over rough terrain. Outside, the exoskeleton is planned to be covered with durable plates that will reliably protect the fighter from splinters and bullets on the battlefield. Also, the suit should have its own climate control system, which will warm the body in cold climates and cool in hot.

In addition, a new suit will also receive inflatable cuffs, which, having received a signal from special sensors, will be able to inflate in order to stop the bleeding in the event of a wounded fighter. Also in the TALOS suit it is planned to build in special sensors that will transmit information about the state of health of the soldier directly to the command center. The suit will be equipped with an armored helmet, which will receive a system for collecting and processing information and will be able to output data directly to the protective glass. Information will be displayed on a protective glass using a collimator system with a focus on infinity, which will ensure the readability of information regardless of wherever the operator looks. In the information issue, which will receive a fighter, will be included and intelligence obtained from the UAV. 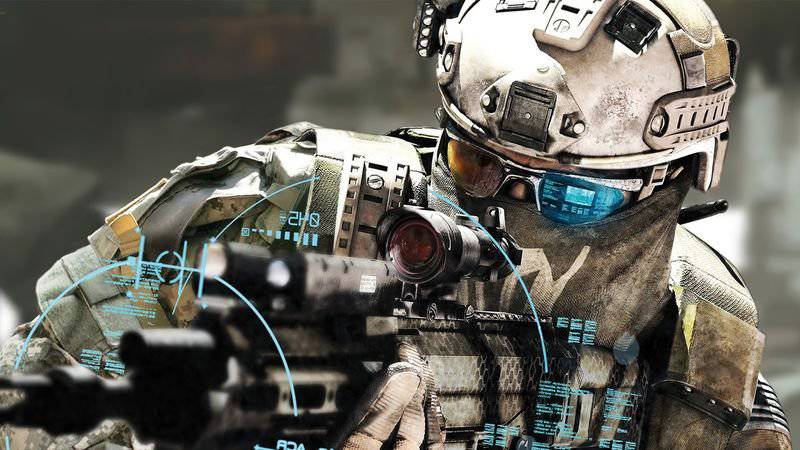 Currently, the exact technical characteristics of this promising costume has not yet been determined. However, the engineering and technical command of the American army has already managed to publish the first video in which it tried to present its vision of a new perspective armor TALOS. In the video, a soldier in TALOS costume finds himself in a dark village occupied by terrorists. Bursting into one of the houses, he is under their shelling, but the bullets just bounce off his armor. This video ends with the words “To be continued”.

Anyway, according to the concept, the new costume really should give the soldier a part of the comic book's superpowers - night vision, unprecedented strength, invulnerability from small weapons and heat exposure. It is reported that the suit's armor will be made of several layers of "intelligent" materials, which will receive sensors monitoring the heartbeat and body temperature of a soldier. He will also receive climate control and even oxygen-rich cylinders. Available cameras and sensors will allow the fighter to feel confident even in unfamiliar terrain and in the dark.

The strength of the person wearing this suit, which will be attached to the legs and arms, is likely to be enhanced by the use of hydraulics. In addition, it is planned to develop an interface similar to "Jarvis", with which the soldier will be able to communicate using voice control. The suit will receive a built-in computer, which will be equipped with a navigation system, like Google Glass glasses, this computer will be able to instantly respond to changes in the situation. In the most distant future, soldiers will be able to evoke personalized information of interest with the help of the power of thought. 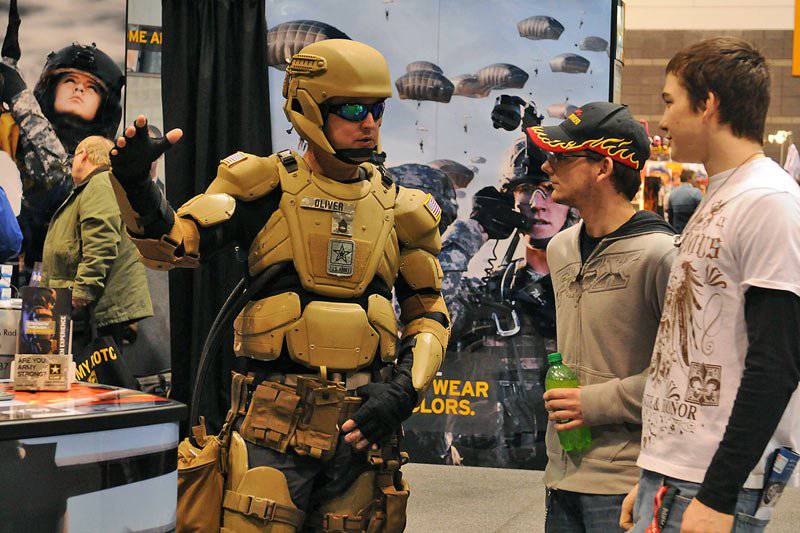 “Today, our requests are comprehensive: we want to see combat armor, power control displays, an exoskeleton with innovative systems, health monitoring, and also a built-in weapon in a TALOS suit,” said Lieutenant Colonel Karl Borges, scientific advisor to the research engineering team. american army. According to him, it will be an advanced armored suit with cognitive functions, chips, sensors, ballistic protection and modern means of communication.

At the moment, none of the divisions of the US Army has the necessary resources to produce such a suit. That is why army representatives are calling on US private companies, research organizations and government laboratories to support the project. At the moment there is information that, most likely, scientists from the Massachusetts Institute of Technology (MIT), who have been cooperating with the army for a long time, will take part in the project. Currently, a team of specialists from this institute is developing a body armor of a material that is able to harden in a fraction of a second under the influence of an electric current or a magnetic field.

According to MIT professor Gareth McKinley: “The new armor will somehow resemble futuristic armor, which can often be seen in various science-fiction films.” It will look like a Iron Man costume or Sigourney Weaver from the movie “Aliens”. It is assumed that the new TALOS suit armor will be tested in field conditions in the coming 3 of the year.

Similar suits for soldiers, working on the principle of a support apparatus or exoskeleton, have already been created in the USA. For example, within the framework of the Warrior Web project, tests began on a set of equipment that should help increase the combat capabilities of military personnel. Warrior Web is a new e-soldier project that should not only increase the capabilities of a fighter, but also reduce the risk of injury, DARPA agency website reports. In particular, as part of the work on this project, a device was tested that can reduce fatigue and reduce injuries of fighters carrying cargo weighing up to 45 kg. The novelty is a special exoskeleton that relieves part of the load from the fighter, thanks to which the soldier is able to make longer forced marches. 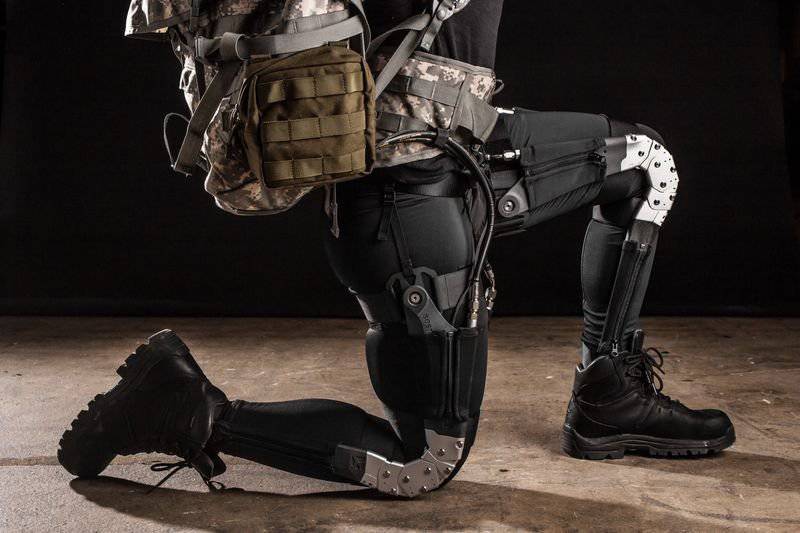 Warrior Web Development Boston Dynamics
The prototype of the Warrior Web kit has a mass of about 28 kg, currently, American soldiers spend hours running around it on the treadmills. Conducted tests should help professionals to determine how Warrior Web reduces the load on the bones and muscles of the fighter, as well as how it protects the joints and reduces human fatigue. A certain number of cameras used during tests on treadmills, allows you to record all changes in the gait of soldiers. At the same time, the devices take readings of the lungs, heart and muscles of a person.

According to the estimates of the creators of the Warrior Web system, it will consume no more 100 watts of power, which is quite acceptable, but only with the use of modern power sources - fuel cells or batteries of a new generation. In addition to the use of various electronic novelties, Warrior Web will be the first exoskeleton costume that protects the skin, reduces the likelihood of injury and the burden on the soldier.

Outwardly, it will be something like a scuba diver suit. Warrior Web will have a mesh structure that allows you to create a torque during flexion of the limbs. In addition, to strengthen the joints in the suit, it is planned to use special plastic and metal joints, which are attached to the suit using flexible traction.

Ctrl Enter
Noticed a mistake Highlight text and press. Ctrl + Enter
We are
Developments in the field of biomechanics"Iron Man Costume" will be tested in June
134 comments
Information
Dear reader, to leave comments on the publication, you must to register.