November 8 2013
56
Prime Ministers of Ukraine and Russia Nikolai Azarov and Dmitry Medvedev reached an agreement at the 10 meeting of the economic cooperation committee between the two countries that joint flight tests of the An-1 military transport aircraft should end on February 2014. Based on the results of these tests, a final decision will be made on the organization of a joint Russian-Ukrainian aircraft production. A source in the Ukrainian delegation told RIA journalists “News"That Medvedev and Azarov reached an agreement, and that for the first time in stories negotiations on this project appeared (finally) the date after which a final decision should be made about his fate.


An-70 aircraft belongs to a new generation of medium-sized military transport aircraft with short take-off and landing. This aircraft is able to transport the entire range of airmobile engineering and military equipment of almost all the armies of the world, and also deliver it even to unprepared unpaved platforms, that is, directly to the place of the military operation. According to the calculations, this aircraft can also be based without problems on mountain airfields located at an altitude up to 3 kilometers above sea level.

There is hardly a longer and more difficult program in the modern history of international military projects that would be so dependent on politics and possess such a dramatic fate. The An-70 aircraft development program was on the verge of closure several times. And even now, amid sounding promising statements by representatives of the two countries, the implementation of this program, especially in the volumes announced earlier, is still in doubt. In the same way, the Russian military transport demand for this class of aircraft remains a big question. aviation. 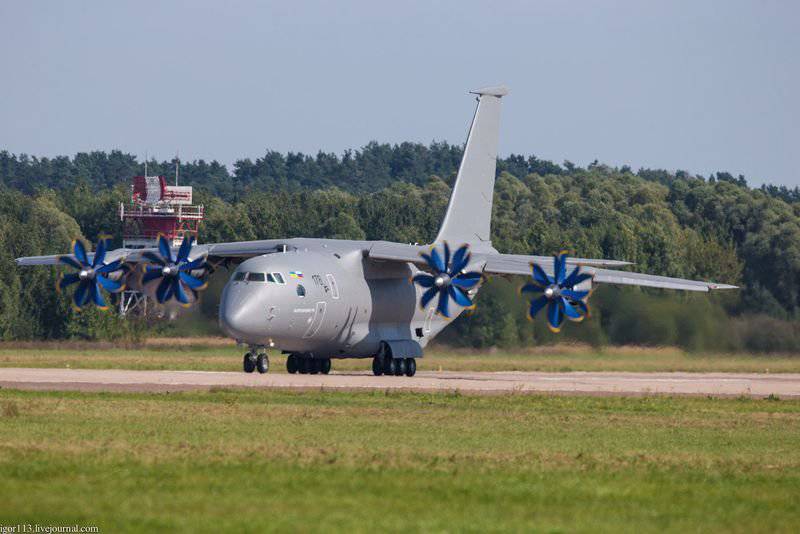 The program for the creation of this aircraft dates back to 1986, this year the USSR Air Force approved new operational and tactical requirements for promising aircraft models. At the same time, of all the projects of new military transport planes that existed in the development of the beginning of the 1990-s, the An-70 medium-range tactical military transport aircraft was more fortunate than the others. The aircraft was developed by the Aviation Scientific-Technical Complex (ASTC) named after About. K. Antonova, while this project was at the time of the collapse of the USSR in the most advanced stage (work on it was started back in 1978 year). Therefore, it was possible to keep it in conditions of total cuts in funding for all military programs after the collapse of the Soviet Union.

This aircraft was supposed to change technically and, what is even more important, the morally obsolete medium military transport aircraft An-12. By that time, the military had already stopped arranging an aircraft with a payload capacity of 20 tons. It was not suitable for solving all tactical and operational-tactical tasks, since the mass and dimensional characteristics of modern military equipment, which was in service with the Airborne Forces and the Ground Forces, continued to increase. Introduced ASTC them. Antonov An-70 aircraft, which had a short take-off and landing, was able to transfer up to 35 tons of cargo (in the future this value will be increased to 47 tons) to a distance of 5 thousand km with a cruising speed of 750 km / h.

24 June 1993 was signed in the capital of Ukraine "Agreement between the governments of Russia and Ukraine to ensure the design, joint serial production and delivery to the operational tactical military-technical cooperation An-70 and transport aircraft An-70Т equipped with D-27 engines". In the same year, the joint venture Medium Transport Aircraft was established. Work on the creation of a transport worker was continued by the state-owned Ukrainian enterprise Antonov. The first plane took to the sky as early as December 1994. 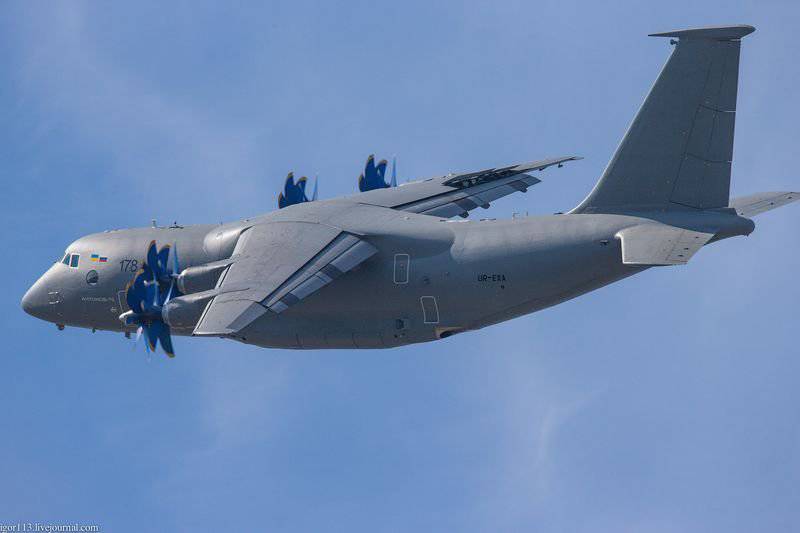 Already at that stage, plans for the release and supply of new military transport aircraft to the troops seemed fantastic, especially against the background of the general financial crisis and the division of the military-industrial complex of the USSR, which gradually turned into its widespread collapse and galloping inflation. According to the plans of the two countries, the Russian Air Force before 2005 had to receive 287 airplanes An-70 and 115 after, the Ukrainian Air Force 73 and 27 aircraft, respectively. Already in 1999-2000, these volumes were substantially adjusted. According to those plans, before 2018, it was decided to release the 164 of the An-70 aircraft for the Russian Air Force and 65 for the needs of the Ministry of Defense of Ukraine, but these plans, as history has shown, turned out to be too optimistic. In 2011, the Russian military announced new figures - X-NUMX of An-60 aircraft. However, as we wrote above, the final decision on the possible production of these aircraft will be made only after February 70 1.

The An-70 aircraft belongs to a new generation of medium operational-tactical short-take-off and landing military transport aircraft. The aircraft is able to provide operational transfer of almost all types of weapons and military equipment of motorized rifle subunits. The aircraft can be used to conduct parachute landing of military equipment and personnel, including single-cargo ships weighing up to 20 tons from low and high altitudes. The cargo cabin of the An-70 is designed to carry 300 infantrymen with personal weapons or 206 injured and sick with accompanying. An aircraft with such capabilities is necessary for the armed forces, since it is able to solve those tasks that are inaccessible to the previous MTC, besides An-12. If possible, the delivery of military equipment directly to the place of operation, this machine is an order of magnitude superior to all existing aircraft.

An-70 is made according to the aerodynamic scheme of the high-level plan, equipped with X-NUMX turboprop engines with one-fin tail and a cargo hatch in the tail of the aircraft. During the flight tests, this machine proved the possibility of using the aircraft even from poorly prepared ground sites with a length of no more than 4 meters. The aircraft is able to take off from such sites, having on board up to 600 tons of various cargoes. Used on the X-NUMX aircraft, the D-20 engine, equipped with coaxial robots CB-4, provides the machine with a very high cruising speed with 27-27% fuel economy when compared with other modern aircraft equipped with turbojet engines. 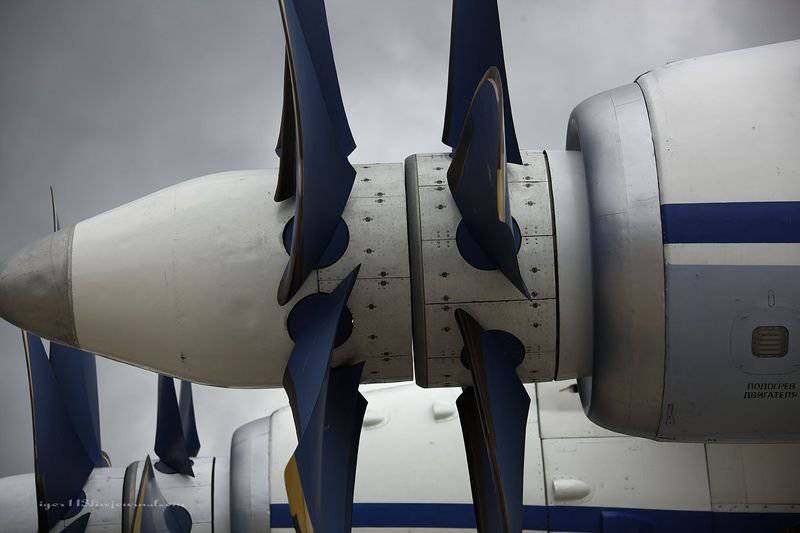 The use of coaxial screws allows the use of a high-pressure jet of air that flows around the wing of the aircraft at a speed that exceeds the speed of the incoming air flow, which in turn gives the wing a greater lifting force. And released flaps (in 60 degrees in the landing position) are able to create the effect of rotation of the thrust vector. Due to this, when performing an approach with flaps fully fired, more than 50% of lift force on the wing arises due to power blowing, while a smaller part comes from air flow.

An-70 can solve a typical transportation problem for the transfer of cargo weighing 20 tons over a distance of 3000 km. with the use of unpaved runways the entire length of 600-700 meters, which is currently unavailable to any of the world's existing transport aircraft. Taking into account all possible probabilistic factors, it can be concluded that the An-70 military transport aircraft is able to perform a shortened take-off and landing, reducing the required aircraft outfit and the cost of the operation by 2 times. According to the calculations, the car can be placed without any problems at mountain airfields, which are located at an altitude of up to 3000 meters above sea level.

In comparison with its counterparts, the An-70 aircraft is able to dump paratroopers and cargoes with a smaller spread by 2 times, and the crew of the vehicle is able to bring the An-70 to the calculated point of contact of the GDP with very high accuracy. The amphibious transport equipment installed on the aircraft allows to ensure the autonomy of unloading and loading a wide range of cargoes and to carry out their air landing. The aircraft loading equipment complex consists of 2-x side winches with a pulling force of up to 1,5 tons and 4-X electric hoists with a total carrying capacity of 12 tons. At the request of the customer, the An-70 can be equipped with an easily removable 2 deck, as well as with all necessary rolling equipment to automate operations with shipping containers. 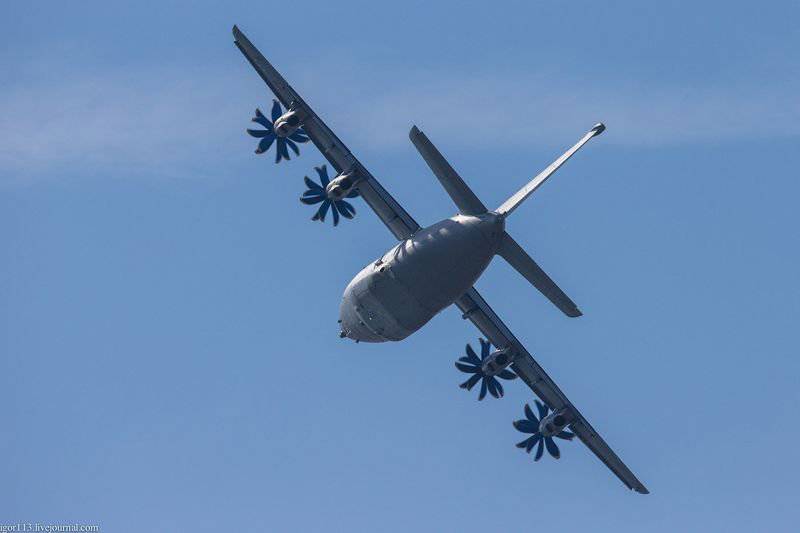 Airborne monitoring and diagnostics installed on the aircraft make it possible to confidently operate the machine even on unequipped airfields, which do not have special ground facilities. The maintenance of the An-70 is based on the use of a state-of-the-art machine operation strategy. At the same time, the An-70 is equipped with on-board systems with digital control and a modern complex of electronic equipment.

The crew cabin is located in the forward part of the fuselage, which is equipped with modern color multifunctional indicators (glass cabin), as well as a double-deck compartment for accompanying cargo on board. Depending on the method of use and the take-off weight of the aircraft, its multi-wheeled chassis is able to provide take-off both from full-fledged concrete runways with a length of 1800 meters and from poorly prepared ground sites with a length of 600-700 meters differing in low soil density. In the mode of short take-off and landing, the An-70 is able to ensure the transfer of cargo of 20-26 tons with a runway length of 600-900 meters to a range of 1400-3000 km.

Until now, the flight copy of the aircraft with the serial number number 01-02 has already made 651 flight with a total duration of 760 hours. During the tests, 15 national and 6 international records were set, including lifting 55 tons of cargo to 7350 meters in height. The fatigue tests of the aircraft have already been completed, the confirmed full life of the aircraft is equal to 15 000 hours or 7000 landings. The bench tests of the D-27 engine and the AH-70 propfan, static tests of the machine for maximum operating load, were successfully completed. Earlier, the transfer of design documentation for an aircraft to Russia for the organization of the An-70 serial production on the basis of S.P. Gorbunov Kazan Aviation Production Association was started. 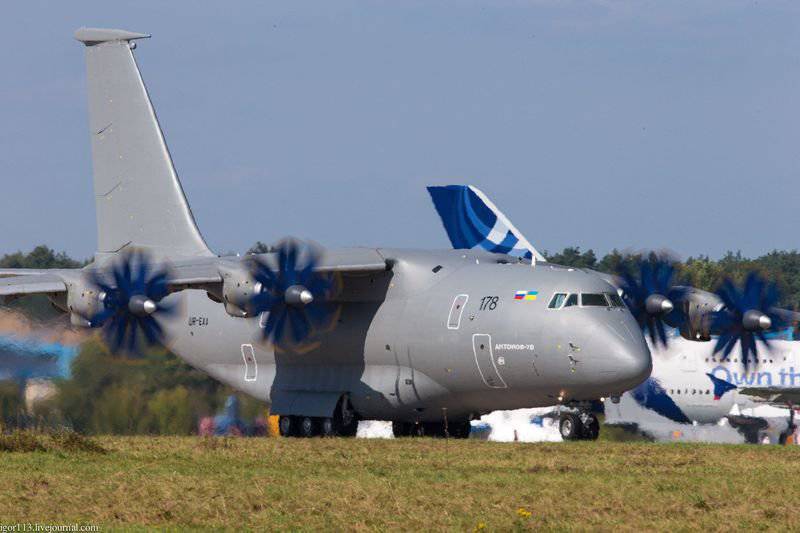 Ctrl Enter
Noticed oshЫbku Highlight text and press. Ctrl + Enter
We are
An-12 in AfghanistanExperimental aircraft with vertical takeoff and landing KOR-70
56 comments
Information
Dear reader, to leave comments on the publication, you must to register.