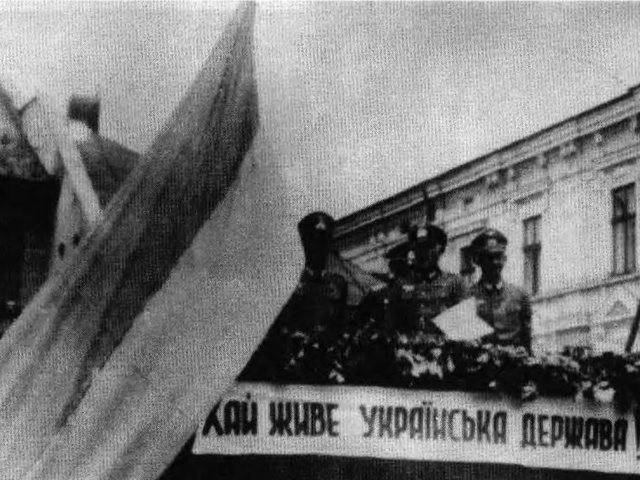 Every year on June 30 in Western Ukraine there are celebrations commemorating the adoption of the “Act of proclamation of the Ukrainian state” on 1941 in Lviv on this day. But upon careful study of the events of that day, they appear in such an unattractive form that the question arises: in fact, what is there to be proud of? However, judge for yourself.

OUN "Union of the sword and plowshare"

Early in the morning of 30 on June 1941 of the year, Wehrmacht troops entered the lions left by the Red Army. Together with brave warriors, brisk young people appeared in the city, speaking Ukrainian, who settled in the building of Prosvita society. Their hard work was akin to the activities of the Union of the Sword and Shouted by Ostap Bender: “Be brave! Great Germany will help us! ”Without controlling anything, without controlling anything, they hastily divided portfolios, appointed each other ministers, wrote appeals and proclamations.

Towards evening, around the 100 people of Lviv intelligentsia were gathered (or rather, driven together) in the building of Prosvity. Many of those present were surprised to learn that they are the delegates of the Ukrainian people (by whom delegated? When?) And are present at the Great Assembly of Ukrainians, the main and sole purpose of which is to proclaim the Ukrainian state and create a government.

Timid proposals to postpone the event for a day or two and hold it in a more solemn atmosphere befitting such a solemn event were stopped at the root. The inventors of the action did not hide their haste: run, run, grab bags, the station departs! Part of the delegates thought not so much about the significance of the event, as about the need to get out of here as soon as possible: it was already dusk, they were shooting in the streets, orders to impose a curfew were hanging on the pillars.

How it all happened

The meeting was opened by Yaroslav Stetsko, deputy guide of the OUN Stepan Bandera, from whom he conveyed fraternal greetings to the delegates. After a brief speech, the Act and the composition of the newly formed government were read from the balcony. Next came the chaplain of the Nachtigall battalion, Fr. Grinyokh, representative of the Regional Provincial OUN, envoy of Metropolitan Andrey Sheptytsky Joseph Slipy and representative of the German army. The meeting conveyed greetings to Bandera (which the Germans intercepted and sent back to Krakow), to the glorious invincible German Wehrmacht and (of course!) To Adolf Hitler.

Even the performance of the representative of the German command Hauptmann Hans Koch, who declared that while the war is going on, should not be spoiled by the organizers, all kinds of political actions should be postponed, and the Führer in Berlin will decide the fate of Ukraine.

The meeting ended with the singing of the national anthem.

Many of the participants of this action dispersed in bewilderment. What does the "new order" bring to Ukraine? How does a new government imagine its activity? What is it going to do? How will it interact with the German authorities? None of these questions were answered at the Assembly. The organizers of the show themselves rushed to Lviv radio station, where they read the Act twice live.

(The description of the action is based on the memories of the direct participants of the event: Doctor of Theology Gavrila Kostelnik and Konstantin Pankovsky, who received the post of Deputy Minister of Internal Affairs in the government of Stetsko. Their memories deserve more confidence than the “works” of modern Ukrainian historians.)

What was in the Act

Many Internet resources, reproducing the text of the Act on their pages, shamefully shorten it, withdrawing the 3 clause, and there are reasons for this. The future is proclaimed at this point. close interaction with Great Germanyled by Adolf Hitler in creating a new order in Europe и joint with the German army struggle against the Moscow occupation. Interestingly, the OUN-UPA supporters tearing their breasts in shirts ever read the full version of this document? 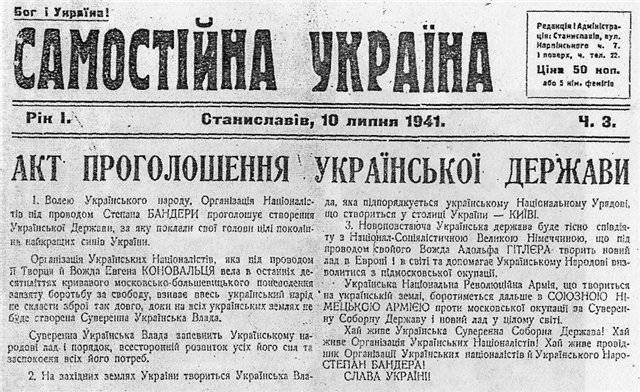 And do not tell tales that according to the plans of the OUN, Ukraine should have become an independent state, built on democratic principles, conducting its independent policy. It was necessary to choose: either with Stalin against Hitler, or with Hitler against Stalin, there simply could not be any third option.

The leaders of the OUN saw the revived Ukraine as a loyal ally of Germany and as a frankly fascist state. Did they know what the regime they praised about Hitler was? They knew! For almost two years, from September 1939 to June 1941, “fighters for an independent Ukraine” lived in occupied Poland and saw the Nazi regime in action with their own eyes. They knew about the extermination of the Jews, and about the Gestapo, and about the SD. But neither Bandera, nor Stetsyuk, nor Melnik had anything against it, and they were all ready to do this and were eager to introduce them in Ukraine. 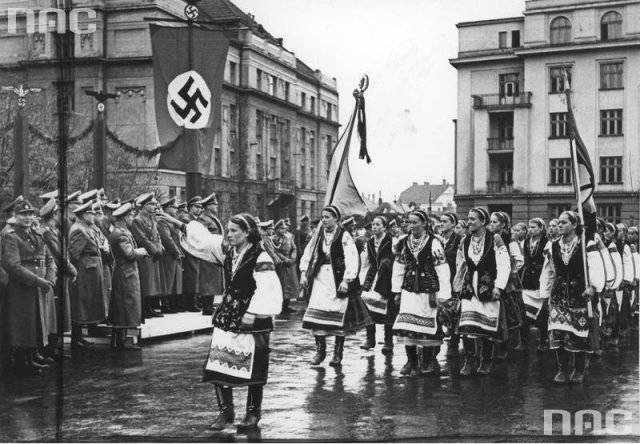 The next day, the UGP (Ukrainian government) continued its activities. Lviv was declared the temporary capital of the state (before the capture of Kiev), Lviv city and regional administrations, and Stanislav region were formed. 4 July UGP sent greetings to the wrestling brothers and fellow fighters (the list is worth bringing it in full): Adolf Hitler, Joachim Ribbentrop, Hermann Göring, Francisco Franco, Benito Mussolini and Ante Pavelic (leader of the Croatian Ustashes).

In all parts of the occupied Ukraine, representatives of the UGP rushed to bring the good news about the re-establishment of the Ukrainian state (and at the same time to take local power in their hands). According to Ukrainian sources, thousands of rallies were held in the provincial cities of Galicia and Volyn, in which Ukrainians expressed their fervent joy at gaining independence.

(How do you imagine this? A crowd of many thousands gathers in the newly captured city on the central square, and the Germans do not react to it at all? Frankly speaking, it is hard to believe: in that situation all meetings of more than three people could be held only with the consent of the Germans authorities, and thousands of meetings - only under the control of German soldiers and in the presence of a pair of machine guns - to ensure order. The occupation regime, you know.)

And in Lviv itself, the work of the power builders relied on a specific military force - the Nachtigall battalion, which was formed from the Ukrainians, the structural unit of the Abwehr regiment Brandenburg. It was these guys in the form of Wehrmacht soldiers who seized state institutions for the future authorities of the new Ukraine, a radio station, a printing house, provided security for the Assembly and the statesmen themselves, resolved minor misunderstandings with German soldiers. 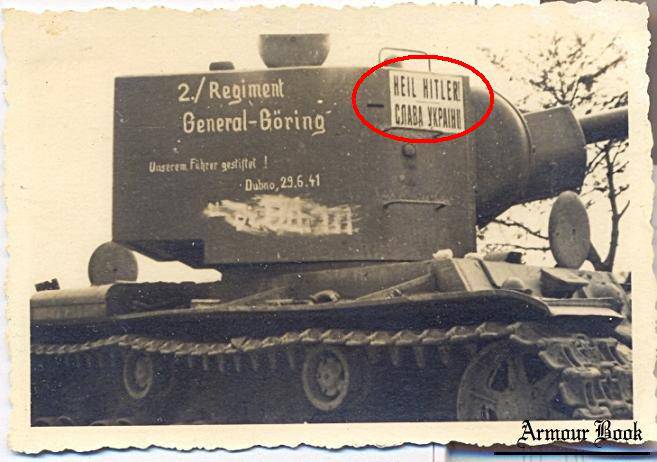 On a damaged June 29, 1941 near Soviet Dubno tank it is written: "Heil Hitler! Glory to Ukraine!"

And then the Germans came, and it was all over. No, they were before, but the Wehrmacht units were not interested in politics. The soldiers occupied military sites, weapons and fuel depots, their task was to further advance, they were waited by Kiev, Moscow. But when, following the Wehrmacht, the Gestapo, the SD and the head of the occupational administration appointed by the Fuhrer came, the show entitled “Independent Ukrainian State” immediately ended.

The officials who came from Berlin got into the situation, at first they were very amazed, and then they simply became enraged. So, the gallant German soldiers fight the Bolsheviks, lay down their heads, and when the territory watered with their blood must come under the control of the German authorities, no one knows where the lads come from and say: “Tse ours!”

On the Lviv events of July 5 reported to the Fuhrer, and he ordered Himmler "to restore order." Himmler arrested everyone he could reach, and packed the prisoners into a concentration camp, where, by the way, not only political opponents of the regime fell. For the barbed wire sent criminals, Wehrmacht soldiers, who changed the oath, and even loyal members of the party and the SS, who violated the laws of the Reich. (It was from these prisoners that Dirlewanger recruited the addition of murderers to his team.)

So you should not put Bandera and his colleagues in the merit of being in a concentration camp: they got there not for their fight against the Hitler regime, but for the banal violation of German labor discipline. A little later, Miller got into the same camp and tried to turn a similar scam in Kiev. Sworn enemies appeared in the next chambers.

OUN members who happened to be in Sachsenhausen probably often asked themselves this question. After all, they constantly declared their readiness to cooperate with Germany and were ready to cooperate, but why ?! From the height of the past years, what they puzzled over is obvious to us. Hitler did not need cooperating Ukraine. The fate of the occupied state is complete and unquestioning obedience, even without any hint of independence. Ukraine was to become the supplier of free bread, lard, milk, coal, minerals and cannon fodder to Germany.

And no one should be deceived by the involvement of Ukrainian collaborators in the Abwehr and the SD. The British and French, fighting against each other in North America, also entered into alliances with Indian tribes, but did not consider them equal to themselves, and at the end of hostilities cut out cleaned.

The concentration camp is not a sanatorium, let's say frankly. But if someone thinks Stepa Bandera and his ilk were waving a kyle in the camp, he is so mistaken. The conditions of detention in the special block of Sachsenhausen were very different from the general ones. Prisoners could go to each other, communicate, had family visits, food parcels were allowed. Along with the OUN in the special block were: the former Austrian Chancellor Schuschnigg, the former French Prime Minister Daladier, the son of Marshal of Italy Badoglio, the leader of the Romanian fascists Horia Sim (who did not please General Antonescu) and the political roach smaller. 300 OUN-katsetnikov (so called inmates) were released 299. The Red Army men who sat in Sachsenhausen had a completely different mortality statistics.

In September 1944, OUN prisoners were released. Forgiven the Germans OUN? Nothing like that! They just needed the “Indians” for the partisan war in the Ukraine they were leaving. It took a strong leader able to organize armed resistance in the rear of the Red Army. They remembered Bandera, who hated the Soviet government, who shot his father and the exiled sisters. (True, the two brothers who were tortured by the Nazis in Auschwitz, he forgave the Germans, apparently, he did not like them so much.) The subsequent fate of Bandera and the activities of the OUN since 1944 have already gone beyond the article, this is a topic for another conversation.

What to be proud of?

Can 30 June 1941 events be considered the pride of Ukraine? A group of adventurers, without any authority to do so, taking advantage of the moment (as long as the owner was away), self-proclaimed herself the leadership of a country whose territory they did not control. Apparently, they hoped that the Nazis, like a fur coat from the master's shoulder, would throw off Ukraine to them. And for this, OUN members openly proclaimed themselves fascists and were ready as equal partners to take the most active part in the activities that were qualified in Nuremberg as “crimes against humanity”.

Only the Third Reich did not need allies, satellites, but needed slaves and toadies. Therefore, the independent Ukrainian state proclaimed by 30 of June existed exactly 6 days, until the true owner came and put order in the house. So is it worth being proud of? 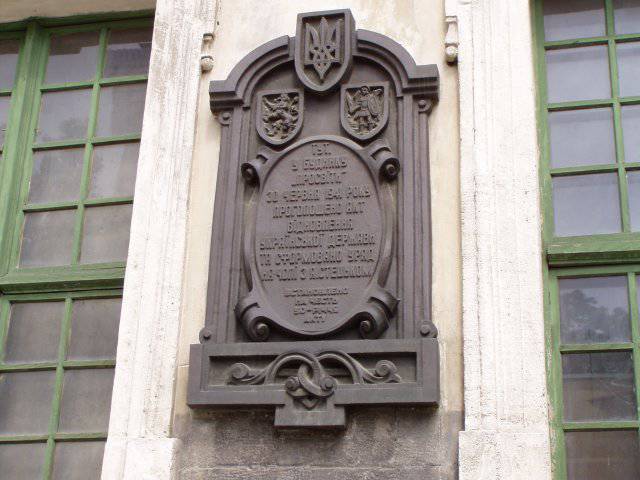 Memorial sign on the former building "Prosviti" on the square. Market in Lviv, where 30 June 1941 was proclaimed the Act on the restoration of the Ukrainian State