Helicopters Denel Rooivak Mk 1: 32 of the year from the start of the project to the first combat departure

November 8 2013
8
On November 4, the South African Air Force conducted the first operation using Denel Rooivalk Mk 1 attack helicopters. In late October, three combat vehicles from the 16 Squadron of the Air Force of the Republic of South Africa became part of the UN contingent in the Democratic Republic of the Congo. In the afternoon of November 4 local time, two Rooivalk helicopters flew to the Shanzu mountain area. The purpose of the combat departure was to support the ground units of the Congolese army and intervention intervention brigade (FIB) in the attack on the position of the insurgent grouping M23. 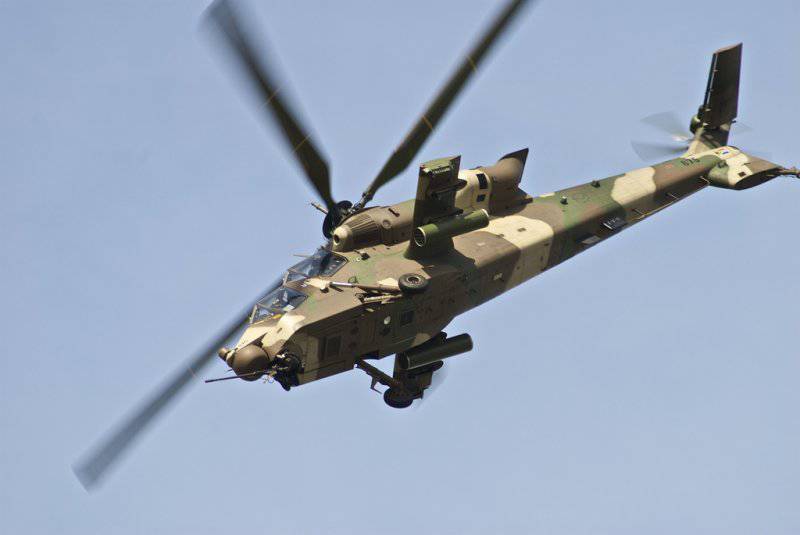 The first case of the combat use of new helicopters is a logical outcome of the lengthy work on the creation, fine-tuning and construction of new equipment. From the start of the project to the participation of new Rooivalk Mk 1 helicopters in battles, about 30 years passed. Such a long time to create a project was due to the peculiarities of the newest stories SOUTH AFRICA. During the eighties, the country could not afford to finance the project in the required amounts. After the change of power, the economic situation worsened, due to which, over the course of 12-15 years, funding for a promising project declined and was conducted irregularly. As a result, the construction of serial attack helicopters of the new model began only at the end of the last decade.

In 1981, the South African Air Force signed a contract with Atlas Aircraft Corporation. The agreement implied the creation and construction of a new combat helicopter, designed to strike at ground targets, equipment and manpower of the enemy. It should be noted that at that time foreign-made helicopters were used to perform such tasks. However, this technique gradually developed its resource, and new purchases were excluded due to international sanctions. In this case, the only solution was to create your own project. 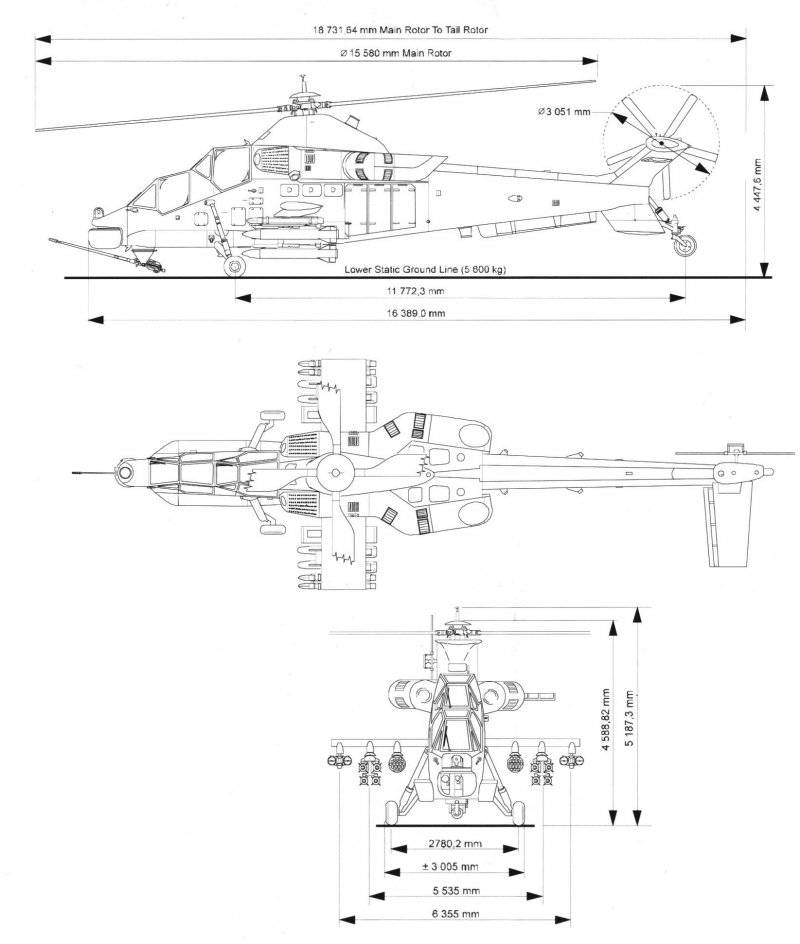 Features of the local climate and operations of recent years have formed the requirements for a new attack helicopter. The military wanted a combat vehicle capable of finding and destroying targets at any time of the day and in any weather conditions. The life of the helicopter was set at 30 years. An important requirement was to ensure high reliability of equipment during operation in dusty conditions. Finally, the helicopter should not need highly qualified technical staff. A shock machine with such capabilities was required to be built at the enterprises existing in the country.

By 1986, Atlas Aircraft Corporation employees developed and built XTP-1 and XTP-2 helicopters (XTP - Experimental Test Platform, “Experimental Test Platform”). Flying laboratories on the basis of the AS-330 Puma machine were designed for testing various systems and weapons of a promising helicopter. For several years, two flying laboratories were used to study the design of the wing, the deployment and use of weapons. Since the promising attack helicopter had to deal with ground equipment and enemy helicopters, the XTP-2 flying lab was equipped with an 20-mm automatic cannon and rocket mounts of various classes.

By the end of the eighties, the technical design of the new CSH-2 Rooivalk (Kestrel) helicopter was ready. The financial capabilities of the Republic of South Africa allowed the company to carry out full-scale research, design and testing. So, in the latter three prototypes were used at once. The first one was called XDM (Experimental Demonstration Mode - “Experimental Demonstration Model”). The first flight of this prototype took place in February 1990. Then, on 1992 and 1996, ADM (Advanced Demonstration Model - “Advanced Demonstration Model”) and EDM (Engeneering Development Model - “Engineering Development Model”) helicopters flew into the air. The prototypes differed from each other in the composition of equipment and weapons, as well as in some elements of the airframe. At each of them, various nuances of the project were worked out, and the EDM prototype can be considered a model for the production of serial machines. 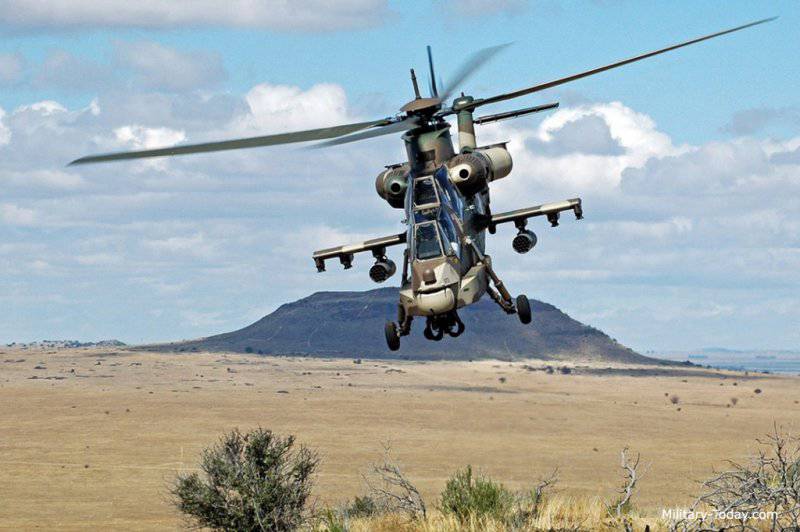 CHS-2 Rooivalk looks similar to several other modern attack helicopters. It is made according to the classic single-rotor scheme and is equipped with a rotor with four blades. The tail rotor with a diameter of about 3 m consists of five blades. The layout of a relatively narrow fuselage is typical for modern technology of a similar purpose. In the forward part of the fuselage there is a double cockpit, in which the pilot's workplace is located behind and above the workplace of the navigator-operator. Behind the cab in the fuselage are power plant units. Two turboshaft engines Turbomeca Makila 1K2 with 1877 horsepower mounted in nacelles on the sides of the fuselage. Between them, the main gearbox is installed, distributing the torque of the engines to the main and tail rotors. Under the gearbox, in the middle part of the fuselage, there are protected fuel tanks.

A characteristic feature of the Rooivalk helicopter are the large filters installed on the air intakes. These units are designed to protect engines from a large amount of sand, typical of the areas of South Africa. Another interesting feature of the helicopter power plant has become the vibration isolation system. A large number of shock absorbers effectively absorb the vibration of the engine, gearbox and rotor. The level of vibration in the cockpit is comparable to the vibration on the aircraft.

To increase the survivability of the design of the helicopter CHS-2, a number of technical solutions used on modern equipment of this class have been applied. The helicopter carries a reservation: the crew is protected by ceramic armor, and the important components and assemblies are composite. In addition, less important equipment components are placed next to the more important ones and protect them with a helicopter hit. In case of injury or death of the commander, both cockpit pilots are equipped with a full set of controls. The helicopter is equipped with a tricycle landing gear. The design of the racks is designed for a safe landing for the crew at a vertical speed of up to 6 m / s. 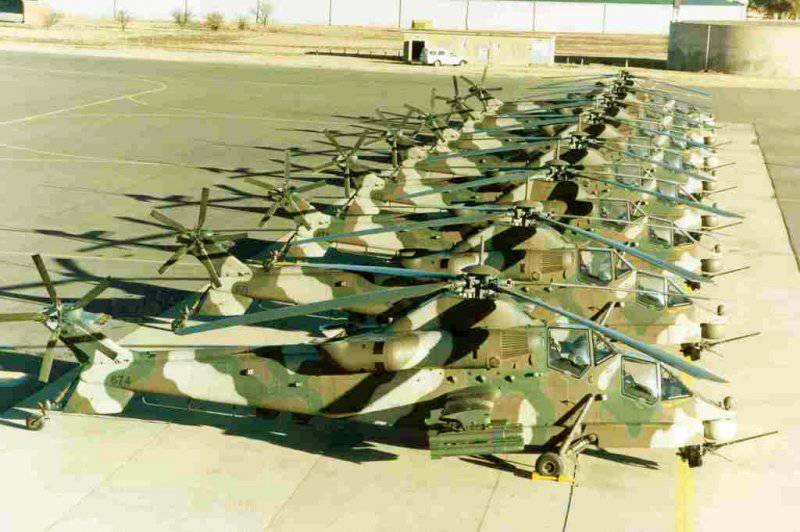 In the nose of the fuselage mounted rotary turret with 20-mm automatic gun F2. Next to the gun are boxes on 700 shells. Due to the low vibration level of the Rooivalk helicopter, the gun has high accuracy. Allegedly, at a distance of about 2 km, the F2 can, with the very first shot, hit an enemy soldier. At the same time, in earlier versions of the project, it was noted that, due to the large length of the barrel, the gun could “illuminate” night-vision devices.

Under the wing of the helicopter CHS-2 there are six pylons for the suspension of weapons. The helicopter must use unguided 70 mm caliber missiles, Denel ZT-6 Mokopa anti-tank guided missiles, as well as several air-to-air guided missiles. However, at the moment, the composition of weapons is limited due to some problems with the onboard equipment. The armament control system architecture is made in an interesting way. The complex of electronic equipment includes two digital computers. Each of them is responsible for applying weaponsplaced on one of the wing consoles.

To control the armament, the Rooivalk helicopter is equipped with a TDATS observation and sight system. The search for targets is carried out with the help of a television camera and a thermal imager. There is a laser range finder, with which you can also highlight the target for other helicopters or airplanes. The onboard complex of radio-electronic equipment allows you to maintain communication with the command center and other helicopters. It is possible to transmit data about detected targets on an encrypted channel.

The attack helicopter CHS-2 Rooivalk has dimensions and weight at the level of foreign technology of a similar purpose. The total length of the machine does not exceed the 18,8 meter, and the diameter of the main rotor is 15,6 m. The weight of the empty helicopter is 5730 kilograms. Normal take-off weight - 7500 kg, maximum - 8750 kg. With two 1877 hp engines, the Rooivalk helicopter is capable of a maximum speed of 309 km / h. Cruising flight speed does not exceed 280 km / h. The practical ceiling is 6100 meters. Using only domestic fuel tanks, the South African helicopter can travel up to 740 kilometers. The maximum distillation range achieved with outboard tanks is 1335 km. 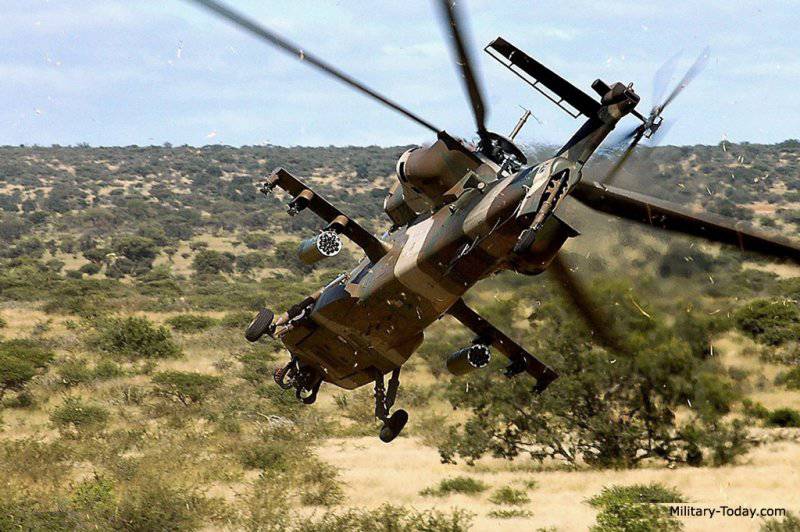 In 1992, Atlas Aircraft Corporation became part of the Denel group. The following year, the CHS-2 Rooivalk helicopter was first shown to the general public. In April, 1997, Denel and Eurocopter signed a contract to continue the South African project together. The result of the contract was a significant renewal of the project, which implies the use of new radio-electronic systems. At this stage, the new designation of the helicopter - AH-2.

Work on improving the project and preparing for the serial construction of new helicopters continued until the two thousandth. Next, the Air Force of the Republic of South Africa ordered 12 helicopters of the new model. In 2005, one of the cars crashed, which is why in the 2007 the Air Force received only 11 new helicopters. After adopting the helicopter AH-2 again received a new name - Rooivalk Mk 1. Due to financial constraints caused by the economic situation in the country, at the moment all 11 helicopters have serious restrictions on the use of weapons. In the current modification of Block 1F, they can only use a cannon and unguided rockets. The completion of work on equipping Rooivalk helicopters with the equipment necessary for using guided anti-tank missiles is planned for the coming years. All existing helicopters were refined to the level of Block 1F at the beginning of 2013, which allowed the South African Air Force to announce the achievement of the initial operational readiness.

The lack of funding in the nineties did not allow for the timely completion of all work on the creation and development of an armament complex that fully meets the requirements of the customer. Because of this, the combat potential of Rooivalk Mk 1 helicopters is significantly limited. However, as shown by the events of November 4, the latest South African helicopters are capable of solving some combat missions in the current configuration. After the completion of the necessary systems, the Rooivalk Mk 1 helicopters will meet all the requirements made in the early eighties and refined several times later. The result of the project could be a strike helicopter, the capabilities of which will allow competing with the modern developments of the leading helicopter-building organizations.