The US military does not like the radar "Voronezh" 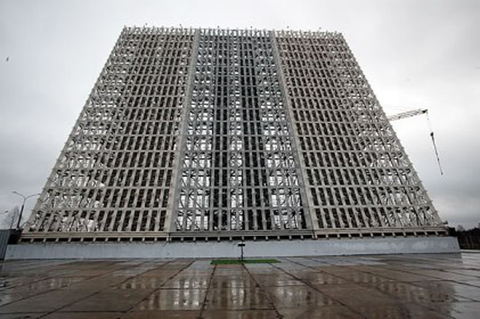 The US military regarded missile defense radar in Armavir as destabilizing the balance of strategic forces.


The Pentagon expressed concern about the actions of Moscow in the field of missile defense. On the one hand, it calls on the United States to disarm, and on the other, it is actively strengthening its borders with anti-missile systems, The Washington Free Beacon writes. Official representatives of the US armed forces declared that the new radar station (radar) of the missile defense system (PRO) in Armavir increases the total number of Russian missile defense systems and poses a threat to the security of America and Europe.

"The Russians do not agree with the deployment of US anti-missile systems installed in Europe, but at the same time they themselves create a network of means for detecting a rocket attack," the publication quotes official publications from the United States.

The US military is also concerned about the creation of the Russian PC-24 “Yars” rocket, which was tested in September of this year. In their opinion, the test results speak of it as a medium-range missile. This violates the agreement between the USSR and the USA on 1987 on the elimination of such missiles. However, the Russian side claims that the range of the Yars (more than 5500 km) exceeds that of medium-range missiles and cannot be considered as a breach of contract.

The discontent of the US military is exacerbated by the statement of Barack Obama to reduce the offensive arsenal in the framework of agreements with Russia. He stated this in September in Berlin. Earlier, the US leadership abandoned the fourth phase of creating missile defense in Europe. According to US Deputy Secretary of Defense Alexander Vershbow, the savings will be directed, in particular, to improve the accuracy parameters of the interceptor missiles that will go into service with American bases in Poland and Romania.

For all these “concerns” I can ask only one simple question - is it possible for you, but can't we? Since when thinking about our security, we should consult with foreign "partners"? Moreover, with those who sleep and see a picture of the encirclement of the new Russian military bases, as in the good old days of the Cold War.

And not Russia is the first in the anti-missile disputes began to build up "muscles". In the end, we did not initiate US actions to create a European missile defense system, which is supposedly intended to neutralize the missile threat from "rogue states". We did not push the “older brother” to twist the hands of the younger brothers in the NATO bloc, that is, their partners, in order to get them to agree to such actions. And you can ask a lot of such obvious questions to which objective answers will not be in your favor, gentlemen.

Therefore, dear ones, it’s better not to express your “concerns”, but rather look for consensus with us on these issues. So said in his time the first and last president of the USSR, the unforgettable Mikhail Sergeyevich Gorbachev.

Ctrl Enter
Noticed oshЫbku Highlight text and press. Ctrl + Enter
We are
The Washington Free Beacon: China has tested a new ICBM on a railroad carThe action “Military service under the contract is your choice!” In Rostov-on-Don: future contract servicemen, exhibitions and “Russian Knights”
238 comments
Information
Dear reader, to leave comments on the publication, you must to register.