Leonid Ivashov: The revolution in Russia is inevitable 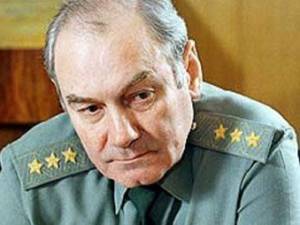 The turmoil in the Middle East is quite natural. The reason is that the Arab world lags behind the global development trends in the socio-political structure. Today, individual states are no longer able to resist the international oligarchy and the transnational community. Therefore, they are united in the framework of ethno-cultural civilizations, such as Europe, Latin America, China or India. However, the Islamic world is divided, and its Arab core, and even more so - 21 state, which in fact are not covered by a single political, social and economic space. Every Arab state uses its own economic model, but the overall situation is catastrophic. The cumulative GDP of the Arab world is approximately equal to that of Spain, which is far from the richest European country. Arab states annually invest approximately 10-12 billion dollars in their own region. And outside, and first of all to the western countries, resources for one and a half trillion dollars are derived. That is, the Arab world is turning into a serving region. And if earlier they served only the West, today it is also the East.

Social niches are clogged. The thirty-and forty-year rule of the same persons creates a pyramid, on top of which the closest relatives, distant relatives under them, then relatives' relatives, and so on. Gaddafi has eight sons and each has his own such pyramid. If you do not fall into this clan, or into the Mubarek clan, then you have no prospects. Add to this the backwardness in education, culture and science - for example, there are three times fewer scientists for one million people in the Arab world than in the West and in the East. Therefore, such a strategic lag requires revolutionary intervention to give impetus to the unification and development of the Arab world.

In Russia, the situation is much more complicated. A revolution is inevitable here. It will be an attempt to find its future and a course of development that will preserve Russia as a single state, and the Russian and other indigenous peoples as a national and social entity. With the current course and regime, Russia has no future. A catastrophe looms ahead - the split and collapse of the country, the withdrawal of the Russian world from historical arenas. These are objective data - when you look at even state statistics today, your hair stands on end. About a hundred million Russians, with 23 million drunkards, 6 million drug addicts, 6 million AIDS patients, 4 million prostitutes. We have the highest percentage of dysfunctional families; 640 divorces per thousand marriages.

Revolutionary transformation is imperative. God forbid that they should pass in a peaceful way.

A bunch of government officials and approximate oligarchs are well aware that it is impossible to avoid a revolution. Therefore, they are in a hurry to suck everything up and tie their business to foreign structures. So that later, when they begin to take away assets, to call for the defense of NATO.

Today, Europe is largely dependent on Libyan oil. They see who the victory will be for, therefore they refuse Gaddafi and flirt with new forces. Moreover, both England and France have supported the Libyan opposition for many years. Now they are looking for opportunities not only to maintain, but also to strengthen their position in the Middle East. Russia has no Middle East geopolitical project. We behave extremely inconsistently - we sign military agreements with Israel, we impose sanctions against Iran, irritating the Islamic world. Medvedev declares Gaddafi a criminal for shooting at his people. At the same time, Yeltsin, who shot at his people and his parliament, put up monuments. Such prostitution shows all the cynicism of the current government.

Showdown in Russia will begin necessarily, while they will, unfortunately, be much more brutal - after all, the country is multinational. In the Middle East, invaders call their Arab presidents, but we have other peoples. And if in the Arab East, anti-Semitism is aimed outside the borders of one’s own country, against Israel or the United States, then Russian anti-Semitism is turned inward.