The era of separatism: does Scottish independence scare?

November 11 2013
87
In the summer and fall of this year, British top officials — the prime minister, foreign minister, interior minister, defense minister, and others — alternately and together frightened and continue to frighten the Scots with terrible, practically unsolvable problems that would fall upon the country after it gained independence. unless, of course, in favor of such citizens vote in the September referendum 2014 year. 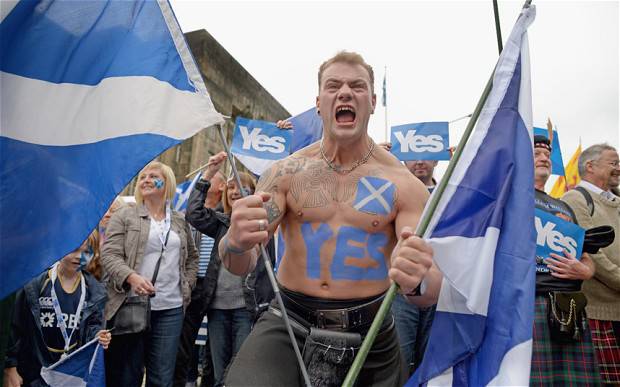 For example, in June, British Foreign Secretary William Hague gave a speech in Edinburgh, where he outlined the reasons for preserving Scotland in the United Kingdom. In his opinion, the current alliance is “viable, successful and respected.” However, the Scottish independence fighters called these statements "outrageous."

To preserve the union, the British Cabinet has developed a number of horror stories that are being introduced into the consciousness of the Scottish masses and, in theory, should lead to a drop in the share of those who are going to vote for Scotland’s independence in the year of 2014.

The main horror story is both economic and political: an independent Scotland will have to re-apply for EU membership.

Membership in NATO is also in question.

Questionable and the participation of Scotland in the UN Security Council.

Edinburgh will be denied a British currency - pound sterling.

The UK Postal Service will not serve "independent" Scotland.

Scottish scare even the introduction of huge payments for cellular roaming.

In July, 2013, the British military intimidated Edinburgh by proclaiming the sovereignty of the United Kingdom over the territory of Faslein, where the Trident nuclear submarine base with nuclear missiles is located. An unnamed employee of the London Royal Institute of the Arms of Labor told an ITAR-TASS correspondent: “By proclaiming Faslane as part of the United Kingdom, not Scotland, London uses the experience of Cyprus, where two British bases have the status of overseas territories of Great Britain.”

At the beginning of October, a report from the British Ministry of Defense was published in the press, in which the consequences of separating Scotland are considered in the context of the security of Great Britain. In this document, analysts wrote primarily about projected English problems.

According to military experts, in the event of a positive decision on the issue of independence, the two countries will need a long and difficult transition period in order to divide the assets of the British Ministry of Defense, currently prescribed in Scotland.

This problem is really key. We in Russia can remember the “carve-up” and the difficulties that arose in the “independent” RF after the collapse of the USSR and the appearance of new states on the political map of the world instead of the Soviet republics. The consequences of the separatist split are still “hiccupping”: there is no need to go far for Ukrainian or Central Asian examples.

But the Scottish nationalists are not interested in the future problems of British security and the division of property. Edinburgh generally considers the problem of Faslane to be artificial: an independent Scotland does not need expensive nuclear forces, but only ordinary ones are needed. So says the first minister, Alex Salmond. Moreover, in the event of a victory in a referendum, Salmond is generally going to remove nuclear weapons from an independent territory and prohibit them constitutionally. Scotland will be declared a nuclear-free zone.

Thus, if London tries to keep the base in Faslane behind it, then Edinburgh is going to demand that the submarines and weapons be removed from there. Salmond wants to arrange there its base - the national Navy. Such a confrontation can be an eternal stumbling block. Russia and Ukraine have an analogue for it.

The large expenses of creating a national army to the first minister do not seem exorbitant. Salmond generally represents his homeland exceptionally rich.

At the end of July, the first minister lucidly explained to the Scots, British and the whole world community that when independence was achieved his country would deviate 95% from UK oil and gas reserves - while observing the current practice of equidistance from the middle line (talking about the North Sea shelves).

Debt problems Salmond also solves in one fell swoop: the British allow the Scots to use the pound sterling, and the independent Edinburgh assumes part of the current British government debt expressed in this currency. If London decides to resist the use of the pound by Edinburgh, the latter is ready to live without London debts: let Britain pay for it itself.

As for the "pugalki" about the EU, then Salmond has nothing to answer about it. The question of the entry of a newly emerged independent country into the European Union will be easily blocked - for example, by Spain. Madrid made an appropriate statement in advance, not wanting a precedent against the background of claims of its own territorial entities, one way or another seeking independence, Catalonia or the Basque Country.

At the end of October, the horror story was introduced into the minds of the masses by the British Home Office. Interior Minister Theresa May said that the declaration of independence of Scotland would create a threat to the security of the United Kingdom: after all, the Scots will have to create their own army and special services, and this will take time. Without the security forces, the authorities of a new independent country cannot even ensure the safety of their own citizens. The threat of terrorism and cyber attacks was also mentioned. As for intelligence, Scotland will not have one.

The Scottish National Party, represented by the same Salmond, answered this question.

Instead of MI5 and GCHQ (the so-called “Center of Government Communications”, whose activities were recently popularized by Comrade Snowden), independent Edinburgh will not only create its own army, but also organize special services, and with minimal costs. As for possible terrorist attacks, Salmond does not consider their risk high: after all, the country will refuse nuclear weapons. In wars similar to those in which Britain participated (for example, the invasion of Iraq), Scotland will not participate. The cost of the defense budget of the country will be expressed in a modest two and a half billion pounds. Britain now spends nearly fifteen times more. Finally, Salmond won’t be crushed by fears about an unsafe life in an independent country: in case of a positive decision of the people, a transitional period to the 2016 of the year is envisaged. During this time, both the national army and the special services will be created.

From the point of view of propaganda, Salmond chose the most suitable time for holding a referendum - September. The referendum will be held exactly after the celebration of the 700 anniversary of the Battle of Bannockburn (23-24 took place on June 1314 of the year and ended in complete defeat of England, and the forces of the parties were unequal: the Scotchmen were 10000, the British were 25000. However, the numerical superiority of the English is historically challenged).

Recent sociological polls do not show an accurate picture of the preferences of the Scots. According to some, only a quarter or a third of the population supports the independence of the country, and according to the results of the others, it is already half or so. Some media outlets point out that the number of supporters of the Scottish secession is slowly but growing.

Undoubtedly, the celebration of the 700 anniversary of the Battle of Bannockburn will generate a powerful wave of patriotic sentiment, against which the number of separatists could increase significantly.

By the way, the Scots separatists also create political and economic horror stories.

Nikola Sturgeon, Deputy First Minister, warned those citizens that they were not supporters of independence about the coming pressure of London. The warning was well thought out in terms of political propaganda.

Through the press, Sturgeon explained to the future referendum participants that, with the Scots negative decision on independence, London would do everything to destroy the security system of Scotland, to weaken social guarantees, to destroy free health care, to cut the budget, etc., the course is proclaimed Panacea for all this on independence.

All this is, in principle, a game of emotions. In fact, the outcome of the vote will decide the issues of benefit - as ordinary Scots understand them for themselves. It is possible that economists will play an important role in promoting both independence and abandoning it. It is these people who are able to convince the Scots whether they need independence or not. But here, too, emotions are rooted in, originating in human expectations ... Once the economist Yegor Gaidar was in charge of reforms in independent Russia. A significant part of the people was led by Chubais and him with “vouchers”. Many believed that they would live richly and happily - just like in the blessed capitalist West, the impoverished and dispossessed part of which suddenly became considered a lie of socialist propaganda. Do Russian people remember the Gaidar period as happy? Not. This is a time of total impoverishment, theft, gangsterism, racketeering, the transformation of the police into a corrupt structure, the collapse of industry and science, hyperinflation, the domination of the ruthless economic ideology of the IMF advisers and the transformation of the unique Soviet society into a herd of individual consumers, terrible in its speed and irreversibility.

The Chinese rightly wish their enemies to live in an era of change. Namely, the changes are waiting for the Scots in the "transition period". The fall in GDP, social instability, rising unemployment, castles on the borders of EU countries, imminent inflation in the event of the introduction of its own currency, political and financial conflicts with London - all this will no longer be a horror story, but an ordinary reality. There are no painless transition periods. And the consequences of independence will be “hiccupped” to Edinburg for a very long time.

Did Ukraine need independence? Did she need Belarus? Or the Central Asian republics? Do the Baltic nations live well now, who, probably, in 15-20 in full force, excluding officials, will leave their homeland and move to work and live in the “developed countries” of Europe?

However, the Soviet Union collapsed completely not the will of the peoples who inhabited it. At the March all-Union referendum 1991, the question “Do you consider it necessary to preserve the Union of Soviet Socialist Republics as a renewed Federation of equal sovereign republics, which will fully guarantee the rights and freedoms of a person of any nationality?” Answered “yes” 76,43% of voters.

Let's go back to Scotland. It is unlikely that its economy will be rescued by the fact that the other day the Lonely Planet guidebook made Scotland one of the best countries to visit in 2014 for tourists. In 2014, of course, everything will be better than in 2013, but then ... When Scotland gained independence, the European Union countries will be closed by borders and visas from it, and tourism will suffer in the first place.

By the way, Salmond and Sturgeon hardly believe in an unconditional victory in a referendum.

It is for this reason that they want to put two questions to the popular vote: “Do you want Scotland’s independence?” And “Do you want more autonomy within the United Kingdom?” However, London insists on including only one issue in the ballot - independence. It is clear from this: Britain is not going to give oil Scotland neither independence nor greater autonomy.

Ctrl Enter
Noticed oshЫbku Highlight text and press. Ctrl + Enter
We are
Scotland on the road to independenceThere is no smoke without fire, or Britain is afraid of losing Scotland
87 comments
Information
Dear reader, to leave comments on the publication, you must to register.