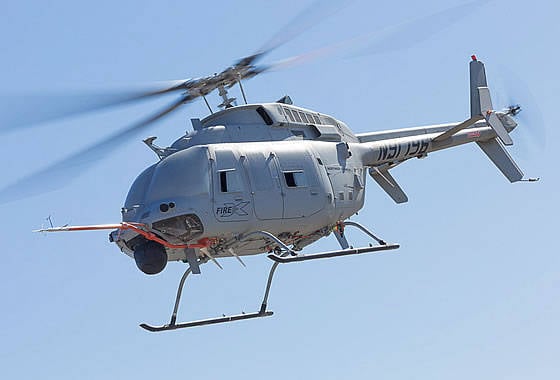 The Northrop Grumman Company announced the successful conduct of the first flight tests of the MQ-8C "Fire Scout" helicopter-type UAV based on the Ventura County Navy in Point-Mugu (California) in cooperation with the US Navy.


The EMD-1 UAV prototype flew on October 31 at 12: 05 Pacific time and flew for seven minutes in an area restricted to air traffic to test the operation of autonomous control systems. The second flight took place at 14: 39 and lasted for 9 minutes. The BLA has reached a height of 500 feet. The flight was managed by a team of specialists from the US Navy and Northrop Grumman.

The MQ-8C was developed in response to the need of the US Navy for a UAV, which will have a greater range, autonomy, and payload than the MQ-8B, which will allow it to perform reconnaissance missions with high efficiency. The use of the Bell-407 helicopter as a platform, equipped with additional fuel tanks and a higher-powered engine, makes it possible to transport three times the payload and double autonomy compared to the MQ-8B variant, which also reduces the workload on the crew of the ship, reducing the number of takeoffs and landings. MQ-8C will be able to transport 2600 pounds (1179,3 kg) of the payload and be in the air 12-15 h (for MQ-8B - up to 5 h). MQ-8C on 3 is longer than the “B” version and can reach speeds of 140 nodes (30 nodes are larger than the MQ-8B).

The MQ-8B UAVs are currently performing combat missions aboard US Navy frigates, supporting anti-piracy operations. Since the beginning of 2011, these UAVs have also been used in Afghanistan for reconnaissance.

Using on-board sensors, the UAV can perform high-quality imaging, identify targets, and then distribute information to various users in real time, increasing situational awareness of the ship’s command and allowing long-term tracking of objects of interest.

As previously reported by TSAMTO, in April 2012, the Command aviation According to the results of the tender, the US Navy signed a contract with Northrop Grumman to develop a new version of the VTUAV (vertical take-off and landing tactical unmanned aerial vehicle) tactical helicopter UAV. The cost of the agreement was $ 262,336 million. As part of the contract, the company is to develop the next generation Fire Scout UAV, the MQ-407C, based on the Bell-8 helicopter, which should be ready for use in 2014. The contract provided for the development, manufacture and testing of two prototypes, the supply of 6 serial machines, sets of spare parts and support for the supplied equipment. In March 2013, the US Navy signed a $ 71 million contract with Northrop Grumman for the supply of 6 additional MQ-8C Fire Scout, which increased the number of vehicles ordered to 14 units. (including 2 prototypes). In total, the US Navy intends to purchase up to 28 UAVs of the new version, which will complement the fleet of 168 MQ-8B UAVs.

The MQ-8C UAV will undergo initial tests aboard the destroyers of the US Navy. According to the developer, this UAV can also be used on ships with a lower displacement.