November 8 2013
19
In early October, the Ardzagank 2013 (Response-2013) command and staff exercises were held in Armenia. Within the framework of this event, an exhibition of new weapons of Armenian manufacture took place. One of the most interesting parts of the exhibition was the stand of ASPAR Arms. This organization again showed the military several new pistols and sniper rifles. Small weapon several types were developed and produced in Armenia and, it is claimed, could soon enter service with the Armenian army.


Currently, ASPAR Arms offers customers three sniper rifles using the 7,62x35 mm cartridge. This ammunition is designed for rifles equipped with silent and flameless devices. The cartridge uses bullets weighing 14,3 grams of two types: armor-piercing and HPBT (Hollow Point Boat Tail). The initial speed of the bullet in two of the three shooting systems is equal to 320 m / s, which reduces the strength of the shot sound. At a distance of 100 meters from a weapon, a bullet saves energy of at least 690 J. Such characteristics are said to provide greater efficiency in the use of weapons for accurate and silent defeat of enemy personnel.

The ASS 300 self-loading sniper rifle is made based on the design of a Kalashnikov assault rifle, because of which a number of its units have an easily recognizable appearance. The rifle is equipped with a variable-length butt, a silencer and several Picatinny rail. A weapon with vapor-operated automatics has a relatively short rifled barrel - its length is equal to 250 millimeters. In the barrel channel there are six rifling with a pitch 200 mm. At the same time, the total length of the ASS 300 with the butt apart to the full length reaches 950-1000 mm. The reason for such a small barrel length was the requirement to reduce noise when shooting. On the trunk, immediately after the front trim of the forearm, a large enough muffler is mounted. The type of this unit was not specified. Rifle ammunition is carried out from box magazines on 10 cartridges. As can be seen from the available materials, the design of the ASS 300 rifle shop is a recycling of AK stores of the latest generations.

To improve the accuracy of the fire shooter using the ASS 300 rifle, can use a bipedal bipod. In addition, an additional folding stop is located on the butt. The weight of the rifle is 4,3 kilogram, because of which the bipod and the stop can be useful for the sniper. Probably, it was the use of these devices that made it possible to obtain fairly high accuracy rates. According to ASPAR Arms, the ASS 300 rifle at a distance of 100 meters is capable of “stacking” bullets in a circle with a diameter of 15 mm.

At the same time with the ASS 300 was developed automatic rifle (automatic) AS 300. It differs from sniper weapons in the presence of a box magazine on 30 cartridges, the absence of an optical sight and a bipod. In addition, the automatic rifle is equipped with a butt of a different design and a front handle. At the same time, the AS 300 rifle uses the same 7,62x35 mm cartridge and has a similar silencer. AS 300 on 0,2 kg is lighter than a sniper rifle, although it has almost the same dimensions. Vapor control automatics provides a rate of fire of up to 500 rounds per minute.

The latest weapon, designed for a sniper subsonic cartridge, is an ASR 300 rifle. This weapon, like a number of well-known sniper rifles, uses a longitudinal-sliding bolt that provides high accuracy and accuracy of shooting. The ASR 300 rifle has a barrel similar to that used in the two previous types of weapons. The ammunition feed goes from a box magazine to 7 or 10 cartridges. Like the ASS 300, the ASR 300 is equipped with a silencer and an adjustable butt. The latter, if necessary, can be folded to the left, adjacent to the receiver. The total length of the rifle with the butt spread out and the silencer reaches 950 mm. When the stock is folded, it decreases to 670 mm. The front of the box is equipped with several Picatinny planks, on which a bipod or other necessary equipment can be installed. On the upper side of the receiver there is another bracket for mounting the sight.

Despite the use of different ammunition delivery systems and barrel locking, the ASS 300 and ASR 300 sniper rifles have approximately the same shooting accuracy. According to the manufacturer, when firing from both rifles at a distance of 100 meters, the bullets fall into the 15-millimeter circle.

On the basis of the ASR 300 rifle, another type of sniper weapon was created - ASR 300C. This rifle differs from the basic version with a longer barrel and rigidly fixed adjustable butt. The barrel length of 450 mm provides the initial speed of the bullet at the level of 700 m / s. A higher initial bullet speed indicates a greater effective firing range, but there are no official data on this score. To reduce the volume of the shot on the ASR 300C rifle, a silencer can be installed. 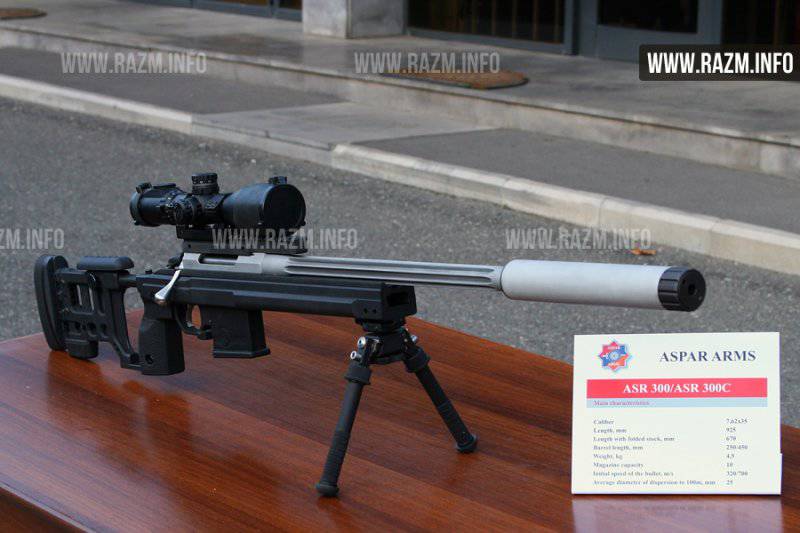 The creation by Armenia of several types of small arms can talk about its serious intentions in the matter of equipping its army with its own production weapons. In addition, it should be noted that the ASP-45 pistol presented in October, as its name implies, is intended for use of .45 ACP cartridges. It is possible that the Armenian defense industry intends to enter the international market of small arms. 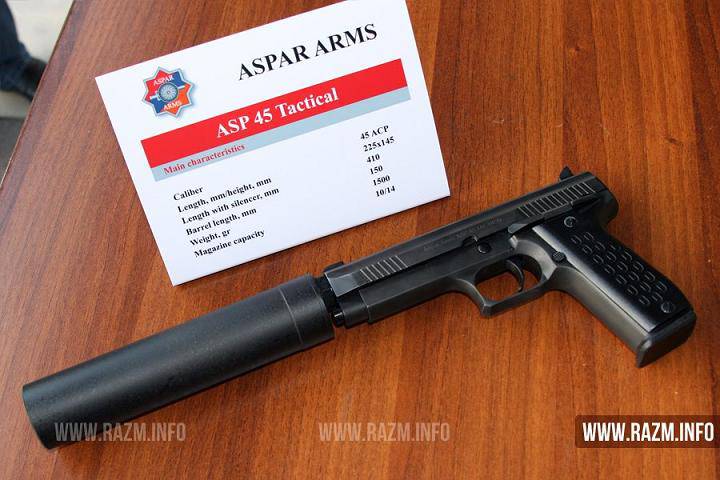 It is unlikely that the company ASPAR Arms will be able to press the recognized manufacturers of sniper rifles, since this sector of the international market has long been formed and will not undergo major changes under the pressure of a young ambitious company. Nevertheless, the ASS 300, ASR 300 and ASR 300C sniper rifles or the AS 300 submachine guns can interest the Armenian armed forces. In this case, the company-developer will not remain without orders for their products and will receive an incentive to develop new weapons.

In the current situation, it is the production of weapons for their country that is the most convenient and promising business for new firms. In the future, the first attempts to enter the international market and interest buyers from the third world countries are possible, but in the coming years, ASPAR Arms may consider only the Armenian army and power structures as the main customers.