November 7 2013
155
6 November 2013, Sergei Shoigu noted a kind of date. Exactly a year ago, he took the post of Minister of Defense of the Russian Federation, replacing Anatoly Serdyukov. It would seem that only a year has passed since Sergei Shoigu took the post of defense minister, but during this year the new minister was not active, and considerable work was done. But, as you know, any activity receives both positive and negative evaluations, and various representatives of both the professional military environment and, say, the civil society today express sometimes diametrically opposed judgments about the work that Sergei Shoigu does in his current position. 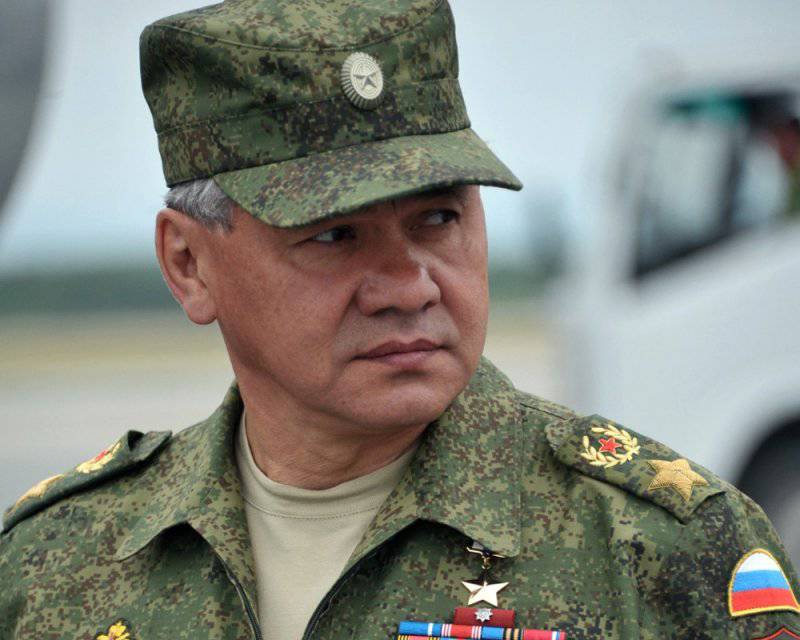 So, exactly a year has passed since that moment when the president of the country (he is the supreme commander-in-chief) dismissed Minister Serdyukov, appointing one of the most experienced Russian politicians Sergey Shoigu, who by that time had many years to give to the Emergency Ministry, and also a little work on the post near Moscow Governor.

What changes since that point (from November 6 2012) have manifested themselves in the Ministry of Defense? Let us try to single out not only those that are most actively discussed today, but also those that, as they say, remain behind the scenes of big politics.

To begin with, it is worth noting that Sergei Shoigu came to the ministry at a time when military reform was gaining momentum, which many dubbed “Serdyukovskaya.” From the point of view of material benefits for the military, this reform seemed to be going in the right direction: increasing the level of monetary allowance (including pensions), at least, the declared reduction in the queues for military personnel to receive housing. Modernization, re-equipment, optimization, innovation, etc. etc. However, in reality, all this went through the heads of those who were left behind the army and fleet for a variety of reasons. Modernization along with rearmament was often carried out only in Napoleonic plans (in their paper version), but they did not spare forces to optimize. The new business card of the Ministry of Defense of the Serdyukov era was: consolidation, unification, consolidation, disposal of non-core property, re-certification, and all that sort of thing.

The servicemen did not pull into reverent attitudes towards the ongoing reform activities, neither an increase in the money allowance, nor any talk about making the dream come true: getting their own apartment. The reason is that the very prestige of the Russian army during the “Serdyukovskiy” reform stage began to roll rapidly downward. Not that he (this very prestige) in recent years was high before Serdyukov, but at that time the fall was frankly noticeable. Experienced officers and generals could not understand what was going on in the army at all, what tasks the ministry was going to solve, and which way would lead hundreds of thousands of servicemen. They called what was happening not a reform, but a rout.

Against this background, any minimal positive in the military environment seemed like a big step forward. Something like this happened after the new minister came to the defense department. A number of his decisions (regarding the Military Medical Academy in St. Petersburg, the rejection of the full prepayment of the state defense order, the return of Suvorov’s parades on Red Square, etc.) were immediately perceived as expected and correct. Paraphrasing the words of the famous American astronaut, we can describe how the actions of the new minister were perceived at the beginning of his work: these are the small steps of Sergei Shoigu and the big steps of the Ministry of Defense and the whole army.

The many-frequent exercises of various military units and units, which were interspersed with sudden (although this term has a lot of critics in this case) checks, became the hallmark of the updated ministry. The exercises and checks were carried out in various military districts using new military equipment, a large number of military personnel (both Russian, for example, Belarusian and Kazakhstani). Not so long ago, a serious check was conducted of the forces of the East Kazakhstan region and the forces of nuclear deterrence, the fleet and Far aviation.

According to experts, many of the teachings lacked scale, and some (including verification of the strategic nuclear forces, East Kazakhstani), on the contrary, were unprecedented. For the first time in all the last years of the Russian army, words about its rebirth began to appear. Little by little, respect for the profession of serving the Motherland began to return, and the prestige of military service increased.

Under the new Minister of Defense, Russia showed the seriousness of plans to return to the Arctic: the base on the Novosibirsk islands is being restored, there are plans to modernize the bases and polygons on Novaya Zemlya.

But one should not lose sight of the fact that when the euphoria in society passed from the first steps of the new minister, his work began to be evaluated more critically. This is happening now. In principle, a completely normal process. Publications began to appear in the press about the fact that everything seemed to be normal, but I would like more from Shoigu. More in terms of real actions, not words; in terms of effective work. Someone was suddenly hurt by the desire of Sergei Shoigu to save a Russian soldier from footcloths, someone saw strangeness in the minister’s passion tank biathlon, someone demanded urgent restoring order in military universities, someone was worried about the length of service on the draft - too, they say, too short for a country like Russia.

No, the flaws and excesses of the new minister, of course, are, as they are, of absolutely anyone who does any work. There are no sinless ones, and even more so among the officials. And although Shoigu is an official and politician who has a very impressive experience, it doesn’t mean that during the year he was at the helm of the defense department, he will take and move mountains, clear the Augean stables and cope with any Lerna hydra ... You can talk about that "I would be in his place" or "another would be in his place", but this is, to put it mildly, a non-constructive conversation. Yes - Shoigu is not a military fairy, who will wave a magic wand and everything in the army will be settled right there, but Shoigu, thank God, is not Manilov. The minister does not wipe his pants in the office, and he is not used to it (at least judging by the principles of his work in the Emergencies Ministry).

Shoigu, which is quite important, is an official who knows how to listen to public opinion. This opinion does not always come in the wake of an occasion, but if it went exclusively in that direction, then in this case there would have been criticism, hinting that Shoigu depended on the mood of the crowd. Like, not a minister, but a rag ... We know ourselves - it’s difficult for us to please ...

They said that the withdrawal from divisions in the Armed Forces — this is from the evil one — Shoigu went on the return of the divisions. They talked about the opacity of the distribution of the housing stock - Shoigu created the institute of public control with the participation of the officers themselves. It was said (and we were on the “Military Review”) that the new emblems of the Russian army proposed by the Ministry of Defense are “artistic climax” —the public also heard about this issue, having decided not to let the proposals that were presented at the Public advice. Did the public listen, for example, Minister Serdyukov? Sure sure...

Sergei Shoigu is the first minister to take real steps towards the de-commercialization of the army. It was with the direct participation of Shoigu that decisions were made to release the Ministry of Defense from financial and economic functions that were completely uncharacteristic of this department. As an example, the Ministry of Defense ceases to participate in military equipment pricing activities and in the implementation of the so-called non-core real estate, which, of course, is a blow to those who cared for a warm spot in the ministry for the implementation of corruption frauds.

But to say that now, from an anti-corruption point of view, silence and grace in the Defense Ministry of the Russian Federation is, of course, premature (the issue with strange prices when buying Glock pistols is one of the last examples). Augean stables still clean and clean ...

In general, for the year of his work on the post of minister, Shoigu is perceived as effective (oh, this word is “effective”) against the background of former minister Serdyukov. In this regard, I would like to hope that over time, the last part of this thesis will disappear by itself, and Sergei Shoigu will be perceived by the Minister (and will prove himself as such), working not for a tick and not for increasing the size of stars on his shoulder straps, but for normal progressive development and strengthening the Russian army and the entire security system of our state and, inseparably, citizens.