November 7 2013
64
Recently, signs of Muscovite Snowden appeared on the Internet: a cap, a beard, a mustache. There are also rumors about a red T-shirt and white sneakers. Snowden no longer wears glasses: he replaced them with lenses. The wealth of the wardrobe of the former American, as well as the ability to often change appearance, are subject to understandable doubts. While still a resident of Sheremetyevo, Edward dressed himself with the help of his lawyer Kucherena. The fugitive whistleblower has repeatedly hit the lenses not only of cameras, but also of video cameras. It is difficult to say whether the inconspicuous American people in black raincoats, black glasses and black hats hunt on the Moskva River embankment or on Vernadsky Prospect, but the Fox News host has suggested that Edward should return to the United States : otherwise they will kill him ... Russians. 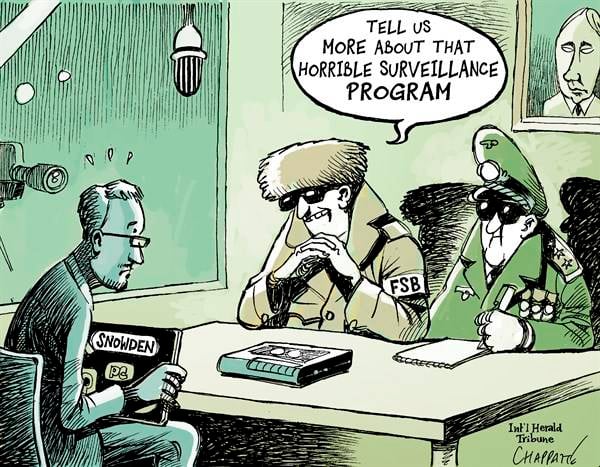 Last week, Edward Snowden in Moscow, through the Bundestag deputy G. Ströbele, handed a letter to the German Chancellor Angela Merkel. In the message, the fugitive asked Germany to give him asylum. Understanding how geopolitics is organized and how Germany and the United States are closely connected, Snowden also expressed a written request and a request to the White House - let his homeland have mercy on him. The last request was accompanied by the whistleblower with the formula of modern times: “To speak the truth is not a crime”.

Beautiful words. They could be the motto of modern debunkers. However, it seems that Snowden is not up to the precise formulations and stylistic beauties. Judging by the document, his goal is to leave Russia and settle somewhere permanently. But neither the German side nor the American letter appreciated. The manifesto of the Whistleblower “In Defense of Truth”, published by him in Spiegel magazine, was not evaluated either.

How could such a high-tech patron like Obama, in which the wiretapping and surveillance of the NSA, the CIA and other special services flourished, rejoice at the advice of a comrade who escaped with files, recommending now to establish social control over special services and talk about the dangers of mass espionage? German intelligence also did not appreciate the civil zeal of the public informer. The secret services of any country will not like it when some “traitor” starts equating them with criminals. And Snowden just stated, and even in writing (in the “Manifesto”), about “criminal listening programs”.

Angela Merkel, having familiarized herself with the text of the letter of Snowden, transferred to her by the deputy, refused to expose the asylum seeker. Relations with the United States is a German priority. Well, no one waited for a different answer. No one except Snowden.

Washington also answered predictably. A letter to A. Merkel was commented on by the adviser to the White House Dan Pfeiffer. He said: “Snowden violated US law. He must return to his homeland and stand trial. ”

This point of view has been repeatedly expressed in the United States and in the past by various official officials.

As for the deputy Shrebele, who talked with Snowden in Moscow, he later spoke at a press conference and explained something to the assembled numerous journalists. According to Strebele, Edward has merits to society: he exposed the espionage of special services, violating freedoms and human rights.

Nevertheless, Ströbele believes that Snowden is a criminal. Noble motives distinguish it from other criminals: after all, Snowden, committing a criminal offense, exposed even greater criminals.

Interestingly, the girls are dancing! .. If we analyze the logic of a Bundestag deputy, then one curious nuance will slip to the surface by itself.

Who, then, are the people who want to condemn Snowden and give him one or two life sentences? And who are those who refuse him asylum? It is logical to assume that these gentlemen are covering up those very "heavy" criminals, about whom Herr Ströbel was speaking with pathos. What is the degree of "criminal" need to build them?

However, Snowden himself is hardly concerned about the degree of guilt of his state persecutors. Sadly he lives in Russia - this is a matter of paramount importance for the fugitive. In addition, permission is given to him for just one year. Temporary. And what's next?

In the United States lives a knowledgeable man - retired lieutenant colonel Oliver Lawrence North. This seventy-year-old Mr. Ms. is a former US Marine officer who served in the Armed Forces in 1968-1990, participated in the activities of the US National Security Council and was known not only for participation in the Vietnam War, but also for the Iran-Contra case, for which in 1987, he was fired from the National Security Council. However, he was later found not guilty. Today this competent Mr leads his program on Fox News - “Military stories with Oliver North "- and writes books.

Lori Rothman with Fox News interviewed this man the other day. It was just about the activities of US intelligence. Of course, Snowden was also mentioned. Retired lieutenant colonel predicted fugitive's dark future:

“And the thing is this: Edward Snowden is in the hands of Russian special services. In Russia, every day he sees only that with their special agents. They have seven different special services. They ask him questions. How do the Americans do it? How do we do this? How do we protect ourselves from what you are doing? How to penetrate, for example, into the American information system in order to gain access, for example, to the law on affordable medical care? And finally, the fifth: who of those, Edward, with whom you worked in the CIA, the NSA and privately, we could get to work with us?

And in the end, Laurie, it will be like this: the Russians will kill Edward Snowden, and they will blame us for this. They will kill him because they do not want us to know how much information he gave them. This is a very, very serious problem. What is really needed now is for Mr. Kerry to go to Moscow and try to persuade his father Edward Snowden to convince his son to return home and get what he deserves — after all, the Russians will kill him. He is a living corpse. ”

It may well be that the American expert said these words under the impression of the double German fiasco of Snowden - the comrade was by no means naive, but clearly not willing to stay in Russia and therefore clinging to any hope, even ephemeral.

On the other hand, the Russians for some reason still have not killed Snowden. Moreover, earlier Edward himself had previously stated that he was afraid that America would not leave him alone. And, in the end, no one except Russia wanted to give temporary shelter to Snowden.

The opinion of the American lieutenant colonel expressed on Fox News is, in fact, another logical quirk. Sitting all my life in an American jail under the tutelage of some kind of torture cases of masters and special doctors with syringes, scalpels and screwdrivers who signed the “Refusing Ethics” multi-page agreement for the benefit of the CIA and the Pentagon is therefore better than dying quietly from an injection by an umbrella on the embankment of the Moskva River.

In addition, for Snowden, the posthumous mark in history also matters: for people who have been thinking over their actions against the system for years, such questions are always important. Having returned home and appeared before the court, he thereby admits his mistakes - and history will not forgive him for that. But wandering around foreign lands will be counted for him.

As for the cap and the red T-shirt, then hopefully Edward has already bought something warmer. Moscow is not Hawaii, you can freeze here ...

Ctrl Enter
Noticed oshЫbku Highlight text and press. Ctrl + Enter
We are
Geopolitical mosaic: Putin is declared the most powerful man on the planet, and signs of Muscovite Snowden appeared on the Internet: cap, beard, mustacheGoogle Earth - a military secrets debater
64 comments
Information
Dear reader, to leave comments on the publication, you must to register.